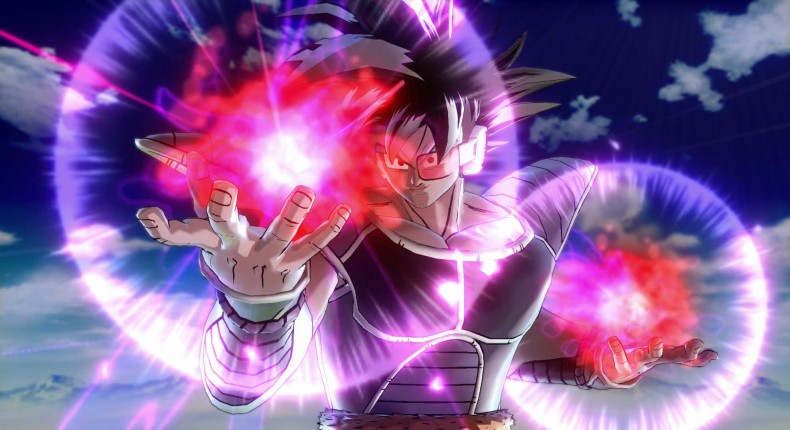 There’s something so satisfying about unleashing powerful combos, battling a clan of Saibamans and taking them out one by one in glorious 60fps aerial combat. My hero, Krystt, flies through the air and uses a Meteor Blow to knock the enemy for six, then, as he comes speeding towards me, disoriented and helpless, I let out a sequence of dominant kicks in the form of Meteor Crash to beat him black and blue. Once one of the Saibamans gets KO’d, I move onto the next one. Rinse and repeat. Dragon Ball Xenoverse 2’s fighting is a joy, and doing so against such gorgeously animated backdrops is great.

In Dragon Ball Xenoverse 2, you play as a new protagonist, one you get to fully customise, who is an up and coming member of the Time Patrol. Enemies from different timelines threaten to change history and wipe out the memories of some of Dragon Ball’s greatest heroes and it is up to you to stop them. At the start of the game, you get to create your character, starting with the choice of which race you want to be. Like the first game, you can choose from Humans, Saiyans, Majins, Namekians and Friezas. I was an earthling called Krystt who wore a bright yellow outfit with blue hair and I looked bloody great, ready to take on anything. The game starts and runs from the main hub in a place called Conton City. From here you can choose what quests you’d like to undertake, whether you want to train and improve on particular abilities or if you’d rather spend all those hard earned TP medals on sparkly new stuff. There are also floating islands and areas outside of Conton that give you different missions and chances to partake in quests others might not be able to do as well. The game features plenty of Dragon Ball characters, and for fans of the anime and manga, there are some great moments. The cool thing about the main story is you can’t just plod through it willy-nilly, instead you must level up and train to make things easier on yourself or else you’ll find some of the battles a real struggle.

Taking part in Parallel Quests online or offline helps to build up your XP, and these different scenarios give you a selection of objectives to achieve. You can gain XP from the main story as well, but if you’re not ready to take part in one of the missions, these PQs (as the game likes to shorten the Parallel Quests to) are the perfect opportunity to earn some substantial experience. You can also earn Zeni and TP medals in Dragon Ball Xenoverse 2 to use in Conton City’s various shops where you can buy clothes, skills and accessories. There’s plenty of room to customise your hero and by spending money you’ll help to shape them into something really cool. As Elder Kai says, “It is your job to correct any inconsistencies like this that crop up in the timeline,” and there are lots of opportunities to do so, but if you don’t have the looks or the right skill set, things aren’t going to be half as fun. There are plenty of chances to fight in Dragon Ball Xenoverse 2, and thankfully combat is not only a joy, but it looks great too. Like many Japanese fighting games, you have a light attack and a strong attack which can be used to form interesting combos on their own. On top of these though, you have some powerful moves which can be executed by holding in the R2 button and pressing a compatible button combo in conjunction with it. You also have Ki blasts which shoot balls of energy to weaken your opponent and they can come in really handy.

Combining all of these helps to make some great looking fighting, much like the kind you’d witness in the Dragon Ball Z anime, made even more special by the fact it’s actually you doing it. Holding the L2 button allows you to fly through the air at great speeds, and locking onto an enemy with R1 allows you to drop a flurry of attacks onto your opponent. Sometimes, combat can get tiring as certain enemies have big health bars or take longer to defeat. Using the same moves over and over again can start to feel tiresome and the action can enter a bit of a lull. Dragon Ball Xenoverse 2 is comprised of 3D battles in huge environments, and most of the time they look wonderful, however, it would be nice to see some interaction from a crumbling mountain or a violent sea. You fly into cliff sides and into oceans, but the scenery never seems to do anything other than look pretty; for all of the action going off around you nothing ever moves or interacts with the battle, and when a gigantic ape is firing a big ass laser through its eyes at a mountain, you’d think there’d be some environmental damage. The worlds never feel alive and it’d be nice to see some interaction with the stunningly designed environments.

If you loved the first game, you’re going to love this. There’re loads of chances for fighting though the PQs both online and offline, along with Academy training and other battle scenarios. Customisation is varied and you get to upgrade your hero to have some fantastic abilities as the game progresses, but if you’re not a fan of the series, it may be difficult to follow all of the game’s story threads. Don’t let that put you off though; Dragon Ball Xenoverse 2 is rich in combat, customisation and quirky Japanese humour.

If you love fighting outside of the restrictions of grounded combat, flying through the air at great speeds whilst firing off some great combos feels free and exhilarating, even if it can become repetitive over time.