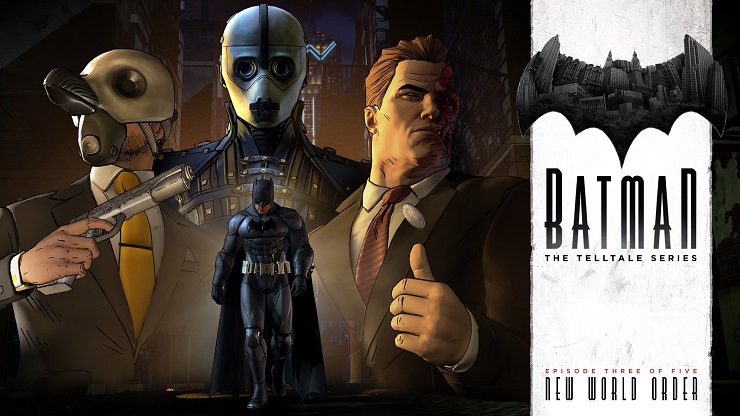 For most of New World Order, it feels like a huge step back for the series, especially when Children of Arkham was such a strong episode. There’s a lot of meandering, needless investigating and bumbling dialogue until things suddenly go from bad to good, thanks to a huge nod to a pivotal villain in the DC universe. I’d be a real shit to tell you, or even hint at it, so I’ll keep quiet, but my word, do things get interesting.

Episode Three follows Bruce after the unveiling of his family (or more specifically his parents) to be criminals, using their money for horrendous deeds and working with the mob for sordid reasons. The Children of Arkham are now out in force, and although they are a murderous band of terrorists, their message is one that seems to be confusing many of the civilians of Gotham. There are plenty of important story points that unfold as the episode progresses and they include some real corkers. It takes a horrendous amount of time for the narrative to gain traction, but when it does it’s full systems go. I remember when Telltale introduced Oswald Cobblepot early on and really not liking the road they went down with his character, but after New World Order, the decision to make him a slimy businessman makes perfect sense. Vikki Vale’s character is more developed and her meeting with Batman sets everything into motion. Probably the star of New World Order is Selina Kyle, aka Catwoman; there’s always been a connection between her and Bruce, but this time it feels a lot more personal and honest. The two of them are shown in a vulnerable light – two heroes beaten and bruised, both in need of compassion, love and companionship. There is a really nice moment between the two that stands out as one of the best they’ve ever had, in print or on the screen,

In the first hour or so, you’re constantly wishing things would pick up. You spend a bit of time with R & D maestro Lucius Fox, but when it should be interesting to learn about a whole range of Batman’s tech, you can’t help but feel like it’s an opportunity wasted. It seems like Telltale are using plenty of filler moments in episode three instead of moving the story forward with the familiar charm, panic and pageantry we’re used to, and you’ll find yourself hoping the lack of originality and intrigue moves over. As the story draws to a close, there’s a moment I never saw coming – a moment I guarantee you’ll never expect in a million years. A character you know and will’ve known for years breaks down limitations and takes leadership of the Children of Arkham; Telltale are doing away with tradition, history and common story elements to present a completely fresh take on Batman and his supporting cast of friends and villains. It’s such a shame it took so much of New World Order to find its feet and deliver a better story.

Episode three of Batman is overshadowed by such a lacklustre start, but as soon as the glimmers of a main villain starts to show, things get really good, and after a pretty hectic confrontation, a whole load of shit goes down to set up episode four incredibly well. Hopefully, the traditionally bad penultimate Telltale episode can have its curse broken and provide a fantastic platform for Batman as the series begins to draw to a close.

Episode Three provides some fantastic moments, but it’s such a shame it takes so long to introduce them.