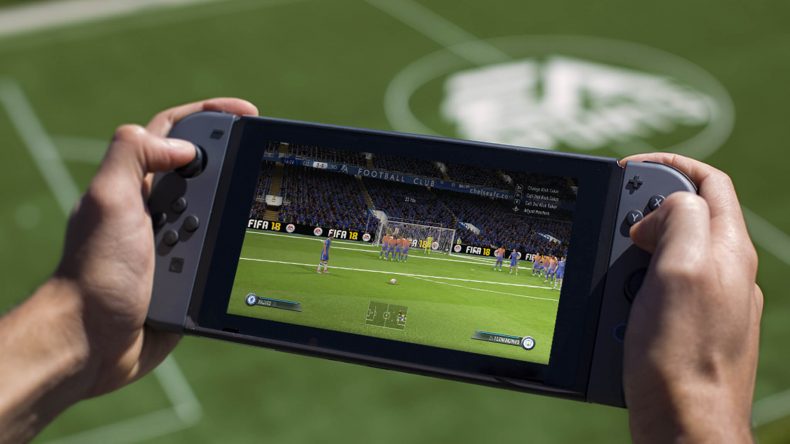 FIFA 18 on Nintendo Switch is a bit disappointing. That’s a horrible way to open a review, but it’s the overriding feeling the game gives me. Sure, we knew it wouldn’t be quite up to date with the Xbox One, PS4, and PC versions of the game, but then, if that’s the case, charging full price for a game that is missing so much of what makes the other versions of it sing feels incredibly cheeky.

So let’s start there, then. What’s missing? First of all, the mode we all love is present: Ultimate Team is here. Yes, you can buy and sell on the transfer market on a Nintendo console. Sadly, that’s the only place you can do it. Where the other consoles allow you to use the SmartPhone app to do your on-the-go trading, the Switch version isn’t supported in the app. Balls. Secondly, the best new addition to FUT (the single player stuff) is also missing. No Squad Battles here. Squad Building Challenges (SBC) are present, thankfully, so that’s good. Oh, but the new Daily and Weekly Challenges? Nah, they’re gone, too. Why? Because this is a custom version, or something equally upsetting. Far worse is that the EA Sports Football Club is completely missing, so all the years of accumulated points are absent, so no FUT coin boosts or easy cheap loan options for you. Along with the lack of Mobile App integration, this makes FUT feel like a weird separate offshoot, and with a transfer market that is dwindling by the days, it’s a bit worrying, really.

The Journey is absent, and given that the other versions run on Frostbite, it’s probably obvious why it’s not here. Career mode is there, but without the updated broadcast overlays that add authenticity to the Xbox One or PS4 version, and without the (admittedly bad) cut-scenes that now make up part of the transfer saga. I’m being a hypocrite saying I miss them, but they’re new, and it makes the Switch version feel old by not being there, regardless of how much I dislike them. In fact, Career Mode isn’t quite on par with FIFA 17. Likewise, though they’re not a huge miss, the fact the quick-sub option is gone is also a shame. Worse, though, is that you can’t play online with your pals. With no console-level systems to let you invite friends, or party-up, EA hasn’t implemented a way to invite someone from your friends list. That one? Yeah, that one isn’t really forgivable. You can play with the JoyCons as well, in portable mode, but it’s less than ideal, with a lot of action happening on a very small screen, with tiny controllers and fewer buttons. I’m not meaning to sound down on it, but I don’t understand why you’d want to play FIFA this way.

But onto the positives, because it’s a technical marvel that this thing runs at 1080p, at 60fps as well. Of course it doesn’t look like the other versions, and the closest approximation I can get to is that this feels like a last-gen game tarted up for the Switch, which isn’t a great look, but given the under-powered hardware, perhaps isn’t so bad either. Running on the old engine, it doesn’t play like the recent games. FIFA 18 on Switch feels like a more fast paced, arcade style of football, and even after messing around with the sliders I can’t quite find a sweet spot. The passing is fine, though, it’s the shooting I’ve got a problem with. Everything feels a little stilted, but shooting just feels rough. After some adjusting to the different on-pitch action, though, it’s not a bad way to play FIFA when the TV is otherwise engaged.

The commentary is as on the money as you’d expect, and the sound is, for the most part, excellent. The only issue I have here is that some of the ball noises, and menu-press noises are from the old games, too. On the other hand, this is the snappiest, quickest feeling FIFA to move around the menus with. While there’s always a slight feeling of latency in the mainline console FIFA, here it’s entirely gone, and you can zip around the Ultimate Team menus to your heart’s content. Despite everything I knew, I had high hopes for FIFA on Switch. It’s not a disaster, and it’ll sell bucketloads even if critics pan it. The question is whether people want a port of a game on Switch that isn’t very close to the rest of the console versions. I find it hard to believe there are many players out there who only own a Switch, and if that’s the case, there’s no real reason you’d want this version of FIFA 18 unless you desperately want to play it on the go.

But for those craving portable FIFA, this game is fine. As a standalone product, FIFA 18 on Switch is a decent game, and I’m scoring it as such. But in a world where Microsoft and Sony are pushing the highest possible resolution on their consoles, this version of FIFA stands in the shadows like a naughty child being kept after school. It’s fine, but even though the football itself is passable, and often quite enjoyable, there is absolutely no excuse for it being so bereft of the modes that make this year’s FIFA so much better. Consider this a “buyer beware”, because for my £50 I’d want a little more than this. It feels like a strange amalgamation of the Vita games mixed with FIFA 16 and old-gen FIFA 18, but optimised for Switch. A dated version of FIFA, then, but still a fun one, with plenty to build on for next year.

Can't invite friends to play online
Way too much missing

A dated version of FIFA, then, but still a fun one, with plenty to build on for next year.