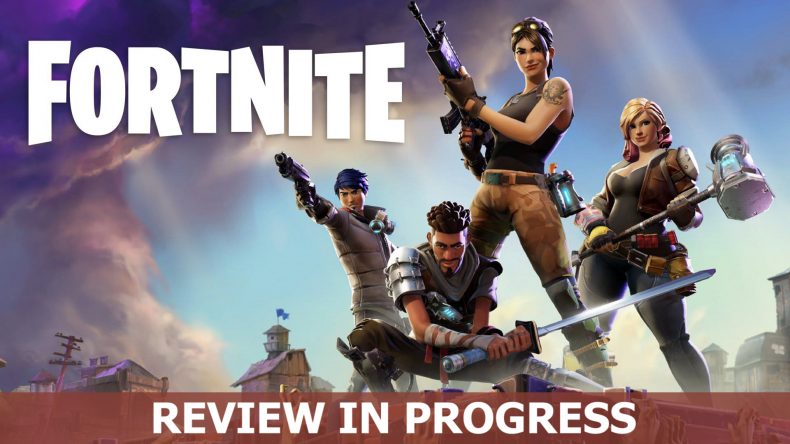 I remember when Fortnite was first announced a few years ago, and you could barely hear the hype for the sound of all those eyebrows cocking at once. From Epic and People Can Fly, here was another game that, inexplicably, was not Bulletstorm 2 (still waiting, peeps, still waiting). Instead, it was a base-building, wave-based tower defence game featuring cartoonish visuals and co-op gameplay. Now it’s finally here, those eyebrows are no less arched, but at least we’ve got a better idea of what it is. If only Fortnite did.

Since a devastating super-storm wiped out 98% of the Earth’s population, the survivors have been forced to band together to defeat the Husks, shambling zombies who emerge from the storm to eat the unsuspecting. Or possibly turn the unsuspecting into more husks. I don’t know. It’s not overly clear. But, look, if they touch you enough you die, and they walk around wearing their former faces as hoods so we know they’re to be avoided.

Regardless, the only way to stop them is to build ever more elaborate forts with multiple levels and all manner of inventive booby traps designed to keep the husks at bay. As with many – many – modern zombie scenarios, we’re not given an awful lot of information about where the husks came from or what they want. Instead we’re just told to keep them off the objective and kill them in their hundreds in the hope that this is all the motivation we need. Sadly, it really is all the motivation we need – because Fortnite, once you pick apart its various mesh-like systems, is lots of fun. The classes, militant Soldier, quick-building Constructor, stabby Ninja, and loot-happy Outlander, are all diverse enough to add lots of play options, especially when you consider that they also come in various sub-classes with different skills and stats. The over-the-shoulder third-person shooting is pretty slick, as is the movement – which is handy, as you’ll spend a lot of time gunning or slicing down husks and charging around the mission area looking for secrets, survivors, and gathering resources. The later come in three primary flavours: wood, stone, and metal. You harvest them with a pick-axe (because why not?), which really only makes sense for the stone. Smashing cars up with a pick-axe to harvest the metal seems somehow counter-intuitive, but it doesn’t really matter, because the construction is also as good as instant.

Hitting B (on Xbox One, or Circle on PS4) at any time brings up the building menu, which allows you to construct walls, floors, stairs, or roofs in seconds. Holding B will also let you edit, chopping walls down to provide a bulwark or insert a handy door. Almost every mission will require some kind of building, either to erect a fort to protect your objective or a flight of stairs to reach a hidden secret or complete a side mission.

Not content with throwing waves of enemies at you, Fortnite also likes to beat you over the head with system upon system, some of which aren’t particularly user-friendly. For example, you unlock Heroes, your player characters, by earning loot Llamas. But instead of allowing you to unlock a Hero and level them up traditionally, Fortnite instead gives its Heroes levels based on the standard colour-coded loot system. So instead of simply levelling your initial green “uncommon” Soldier, Ramirez, you can instead unlock blue, purple and orange versions of her, which start with stronger initial stats but the same skills. It’s a weird system that doesn’t feel constructive of anything other than giving you more loot. The skill tree is completely separate to the evolution of individual Heroes, instead allowing you to spend points to unlock Hero “evolutions” which unlock new skills and skins for all Heroes of a specific class, blanket stat improvements or new slots for Defenders and Survivor Squads.

Defenders are NPCs dished out as loot rewards who can be added to your Hero Squad and used in the Hub Missions where you’re tasked to defend your own unique Storm Shelter. It’s a neat idea, hamstrung by several factors: firstly, they couldn’t hit water if they were standing in a puddle; secondly, they burn through ammo like Xenomorph blood; and thirdly, YOU have to provide said ammo. From your own reserves. Every time they run out. If you don’t, they’ll stand around and get eaten.

Survivors on the other hand, can be assembled into squads and sent out to scavenge supplies, which is utterly pointless as you’ll gather more than you’ll ever need simply by playing missions. The structure is semi-freeform, with you given specific objectives like “Rescue the Survivors” or “Protect the Atlas” (in which you activate a laser array that will do something vague to the storm and protect it while it charges), but you’re given a lot of free time before you need to actually complete any objectives. During this time you explore, build, find loot chests, complete off-the-wall side missions like finding lost medikits and smashing TVs, and generally harvest materials. In an odd design choice, you can only craft stuff in the fields and not between missions, and there’s no store to buy or sell shortages or overflow. As a result, the crafting is clunky and not at all clear in terms of components required or where to get them. Add to this the fact that weapons break fairly quickly and you can’t repair them, and you have a pretty convoluted, overly-complex crafting system that could be so much simpler.

And that’s Fortnite’s theme, really: the whole thing could be much simpler. In an effort to innovate and stand apart from the crowd, Epic and PCF have made their systems needlessly confusing and, dare I say, a little bit exhausting.

It’s a paid beta, though (which is iffy in itself in some ways), and so there’s lots of room and time for improvement. It’s just a shame that a game with such polished shooting and looting is bogged down by such clunky menus, tangled systems and tiresome mechanics. We’ll re-examine Fortnite as and when the big changes come, but for now it’s a lot of fun, once you’re comfortable with how it all works.