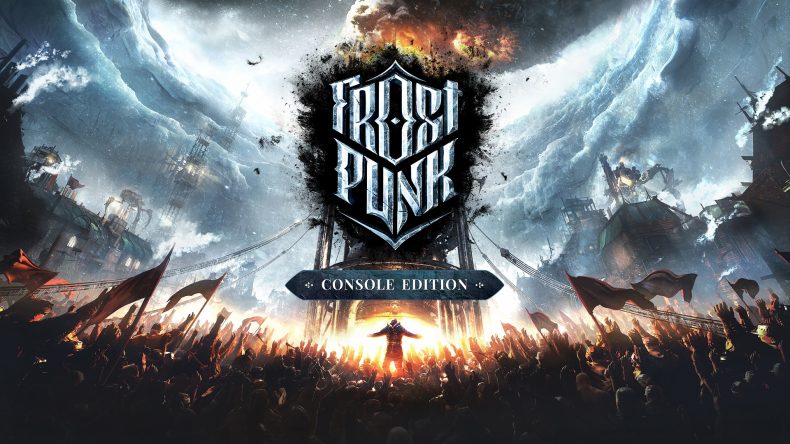 Most city-building games are ultimately positive affairs. Sure, you might have to struggle to balance various resources. There may even be malicious invaders with an eye on your land. But ultimately above it all, it’s about taking a fledgling city and thriving. Prosperity is key to survival, and being the ruler in these situations is a gratifying experience. But in reality, if we were ever in a situation where we needed to rebuild from scratch, it’d be a tough old slog. One that would be marred with the burden of choices where lives hang in the balance, and the price of a misstep being the ultimate cost. Enter Frostpunk Console Edition, to deliver me that cold hard truth.

And cold is indeed the order of the day here. Things have gotten incredibly chilly, and forced humanity to rebuild in a new region. The weather has decimated the world as we know it. The only hope is to settle around a central generator that provides heat, and therefore life, to your dwindling population. The traditional mechanics of resource gathering and building homes for your people are all here. But if anything they form an almost secondary role to the ultimate goal here, which is simply survival. Not perishing to the bitter cold is where your focus will be, and that upping of the ante in such a simple way, makes Frostpunk Console Edition the best city-building game I’ve played all year. The temperature is a constant threat, and it’ll fluctuate from a balmy -20 degrees celsius to much, much lower. Buildings (including homes) need to be at a certain temperature to function, and therefore offsetting the chill is your number one priority. Building close to your central generator, then, is the obvious choice, but you’ll need other options. Building a Workshop unlocks various research trees to help in areas such as heating or resource management to give yourself a fighting chance. Alongside this, you also have laws you can pass every so often which provide mandates to your people, which provide various options to make life easier.

The game-changer really though is that the lives of your people are at stake. In other titles in the genre, you can often rely on a steady supply of children. But because the time-frame of this game is a few months rather than years, there are no new lives being created. Your population is finite, so keeping them warm (and thus alive) is paramount. It gives every life value, above being a number in a box. Once it’s gone it’s gone – forever. And the game is pretty blunt. If people get too cold, they get ill and they die. If they aren’t fed, they die. If you run out of coal and you can’t run the generator, well, you get the idea. It forces you to carefully consider your options much more than a normal city-builder. You feel responsible and part of the tough journey that everyone is going on, a far cry from the normal ivory tower rule in other games. To hit you more in the feels, there are also two other meters to keep an eye on. These represent the population’s current levels of hope and discontent. Managing these is also critical to your tenure. If they lose all hope in your ability to rule them or become too angry with your decisions, then your life is finished, instead of theirs. Often you’ll be presented with options or choices that affect hope or discontent in certain ways. Sometimes you’ll choose outcomes that feel right, but your task will be to manage how people feel towards you, to ensure you’re still in a job. It’s an overlay that perfectly compliments the feeling of dealing with individuals that you care about, and struggling through this cold, harsh adversity together.

Thankfully, the odds aren’t completely stacked against you, because there is plenty to be doing to overcome your hostile environment. On top of research and laws, you can also send out scouting parties to explore other sites of interest. If you’re lucky you might discover additional resources or other survivors to bring back to your camp. The latter are particularly valuable given it’s the only way to boost your numbers. At the press of a button, you can also access a heat map of the environment to see whether buildings are at risk of becoming too cold to operate. Combining this with the temperature forecast, and you can actively plan ahead.

It’s fair to say Frostpunk is a punishing game, not least due to its harsh environment, but the many variables you have to juggle to survive. It’s highly likely your first couple of attempts will result in failure, and it will seem a little overwhelming. But if you persevere, things begin to click, and the game sprawls out in front of you. There’s also plenty of content here too for those who stick with it. Not only is there a meaty main story peppered with key, challenging events to overcome, but the more time you survive in the frigid wastes, the more additional scenarios you can unlock. These pose different starting situations and restrictions on you, giving you different objectives, and are a great way to mix up the gameplay from the main story. Frostpunk also runs very well on console. The decision to make the game focus on a small, specific area of your city, means that moving around it feels smooth. The camera controls are responsive and make it easy to navigate around your city. Switching to and from the scouting party is pretty seamless, meaning you spend more time focusing on the tasks at hand. It’s also nice to look at, with weather effects and detailed buildings all being well presented. Rarely have bleak arctic conditions looked this inviting.

It’s not often that a city-builder tugs at your heartstrings, but Frostpunk does just that. The setting; the desperation; the mood meters; the tough decisions: all of it makes you care about the people under your protection. Your choices are, more often than not, a matter of life and death – and death is permanent. It elevates your position from a simple strategist, to a parent of the people, one who holds their very existence in the balance. The depth of the mechanics means you always have a fighting chance though, even if you’ll fail a few times along the way. You’ll try different strategies to see what works and what doesn’t and slowly build up your experience. And when you do succeed, it’ll feel doubly good, as you’ve come through it with your people together. City-builders rarely make you feel like this, but Frostpunk – despite its almost heartless setting – delivers one of the most emotional connections I’ve ever had with genre. The overall package is a must for fans and those simply looking for a great survival title.

Frostpunk Console Edition is the happiest I've been staring despair in the face. A fantastic city-builder where you really care about the people you're trying to save.