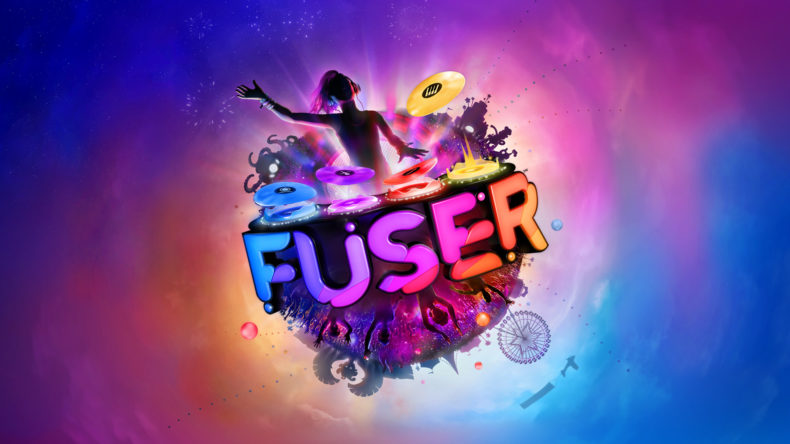 I miss the time when Guitar Hero and Rock Band dominated the video game market. Like Tony Hawk Pro Skater, they took off in a big way and became the only game anybody wanted to play. Since the way we consume games has changed, peripherals are seldom released anymore, and with these changes come opportunities. Harmonix know that controllers resembling guitars and drums are no longer in demand, so the shift to taking a different approach has done wonders for them. Fuser is so good that I’ve been tapping in my sleep and counting bars whilst having my lunch. It’s obvious they know how to make a game that blends music creation and fun work, and with their latest game, their experience and genius is obvious.

The main focus of the gameplay is to take different instrumentation from different real world songs and blend them together. Sounds pretty straightforward, but there’s so much to do that no two attempts sound the same. You can play the drumbeat from 50 Cent’s ‘In the Club’ and the vocals from Alanis Morrissette’s ‘Ironic’ together, whilst sprinkling on the melody from Macklemore’s ‘Thrift Shop’ and the bassline from The Clash’s ‘Rock the Casbah.’ There are over a hundred songs in the game, and the more you unlock, the more creative you can be. 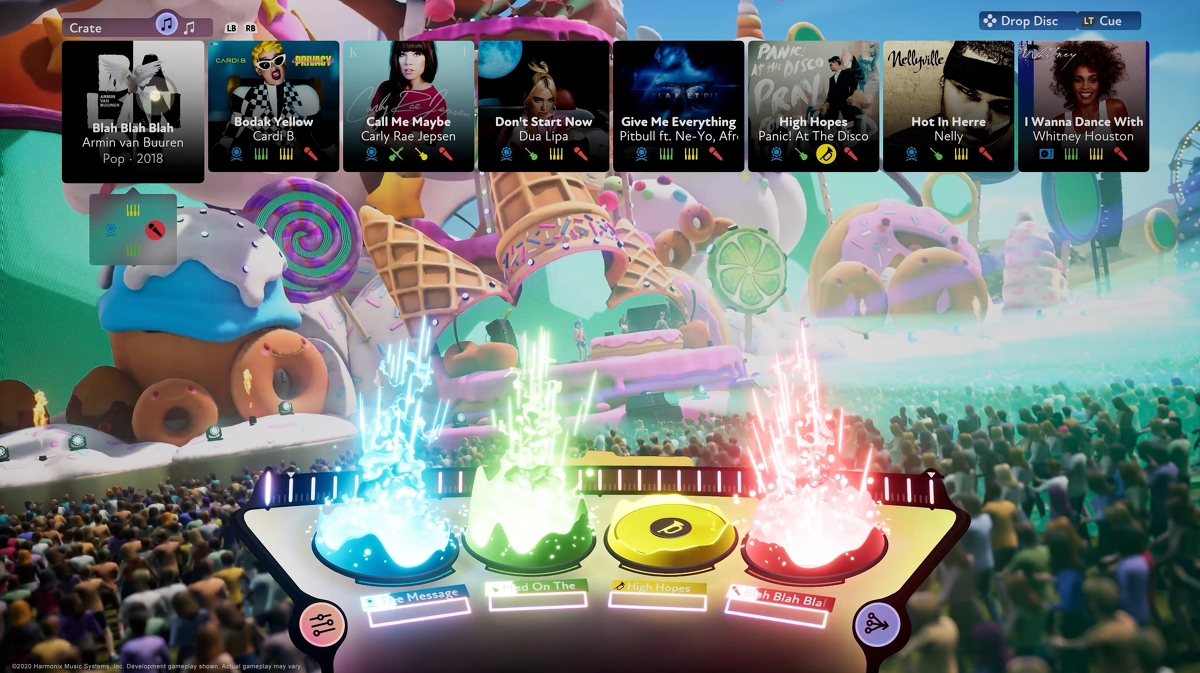 You can mute vocals or allow the drumbeat to play solo for a few bars, fade-in or out, and eject tracks out whenever you want. Effects can be put on your creations, and the ability to create your own instrument loops is also available, such as a piano or electric drumbeat. Diving in and experimenting is by far the best way to enjoy exactly what the game has to offer. Telling you what options you have is nothing to the feeling you get when you are putting music from all over the world together whilst transcending different genres. I can’t do it justice in that respect, but what I can do is encourage you to get this game because it is bloody brilliant.

Another thing Harmonix has done is build in a Campaign. Here, you will learn the ropes of everything you can do when creating your masterpieces. The whole concept is that you are a DJ who has headed out to play different festivals across the world. Within each stage are different ‘levels’ that take part at different times of the same day. With each attempt at a level, you must complete tasks that are set out for you. Dropping a new track on a downbeat gives you a perfect or good score, but if you mess it up, the fans will start to boo.

It’s never a nice feeling when you aren’t vibing with the crowd, but eventually you’ll feel the beat in your bones. The crowd will also be more impressed with you if you switch up your sets frequently. Even when tasks are being given to you, you will still need to inject new life into your performance. Certain members of the crowd might ask you to drop the vocals to a particular track or genre of music, and by doing so you gain some extra points. If you don’t drop tracks on the beat or when a colour-coded prompt appears on the beat bar above your decks, it’s time to start again. Harmonix doesn’t necessarily want you to fail, so if you struggle with a particular level you can turn off fails so that you won’t have to keep retrying. 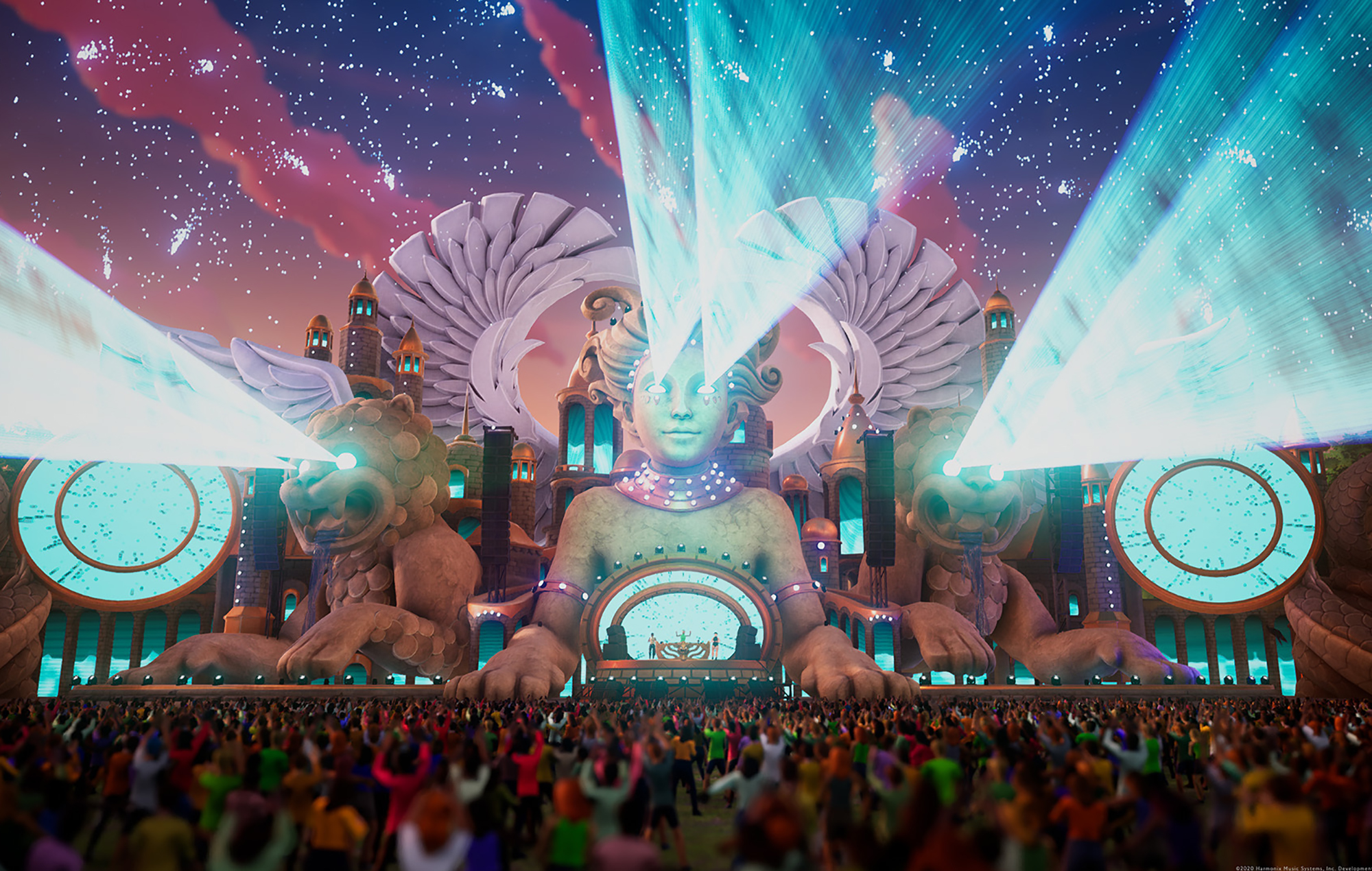 By performing well, you will get XP. Once you reach a new level you’ll get money to buy new songs as well as customisation points to spend on everything from new outfits, lighting effects, and record create design. Being allowed to create your own identity is equally important. You aren’t picking male or female body types. Instead, you’re picking your appearance to whatever you want without any gender barriers. Be yourself, make amazing music, and have fun.

Each location offers new environments and colours, different themes and a character that offers you tips. There’s no real story here, but it doesn’t need one. Festivals are one big party, and the feeling you get once you are up on the stage builds this profile to epic proportions. If you don’t want to follow the story or be restricted behind the challenges on offer, you can take part in Freestyle Play where you are free to do whatever the hell you want. 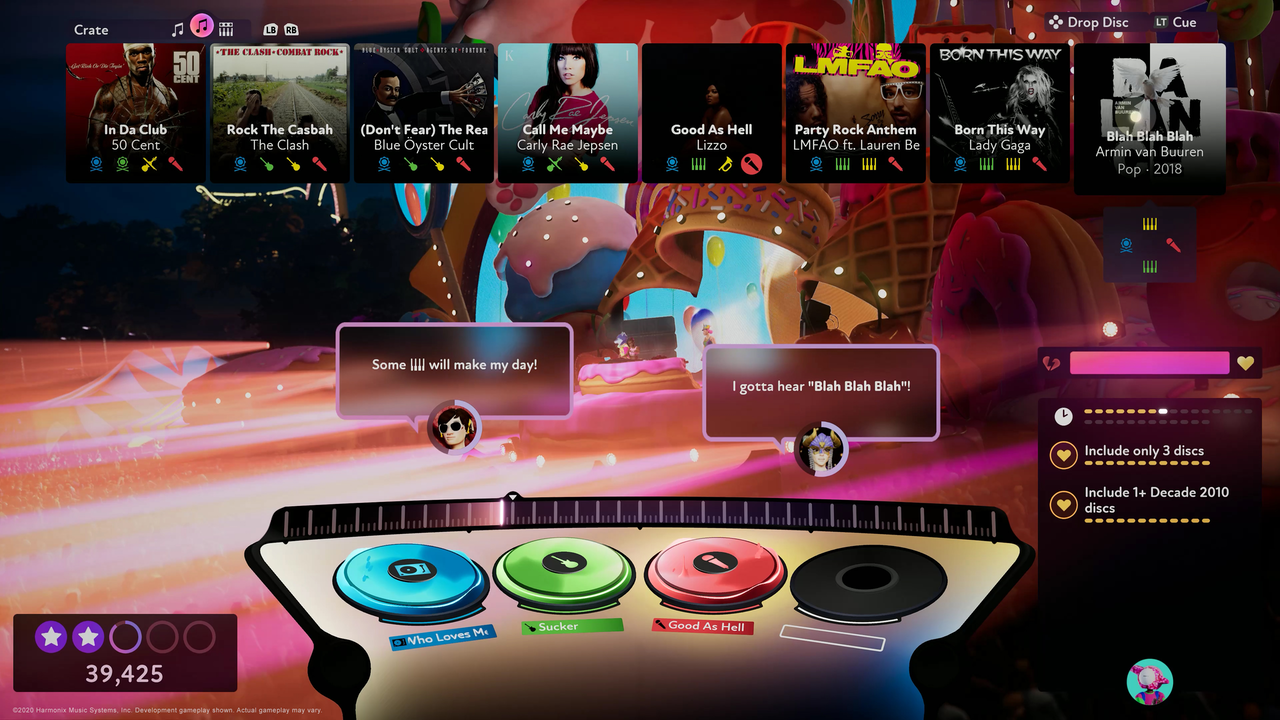 There’s a great sense of community in Fuser. It wants you to feel involved in something greater where people are united through a love of music. You can save your mixes if you happen to think they are pretty great, and then share them with the world. Playing online offers you the opportunity to mix songs together with friends or play against them. Unfortunately I wasn’t able to test it, but the concept adds to the belief in unity through music and I love that.

Fuser is such an enjoyable experience that allows you to create music from a library full of classic and modern tunes. DMX, Shania Twain, Evanescence, Ace of Base, and Megadeth are just a short selection of the artists available, but that example of diversity should be enough to spark your interest. I adore what this game is, what it represents, and the satisfaction of creating something original. If you need an escape, Fuser is the game to do it.

Fuser is as exciting as it is creative, with plenty of options to make music through different genres. Harmonix has made a colourful and enjoyable game, and I can't recommend it enough.