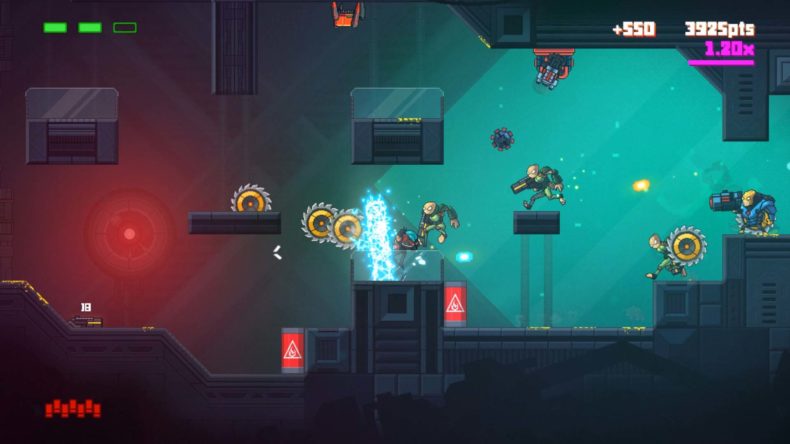 I’m all for playing a laid back game from time to time, but when it comes down to it frantic twitchy action is what I want to gorge on. There’s just something about a game that requires lightning fast reactions and split second decision making that gets my blood pumping. From Pacman to Geometry Wars, I’ve always enjoyed the punishment of a truly skill testing video game. The latest game to push me to my limits is Gunborg: Dark Matters, a twin stick platformer with a sci-fi twist.

Armed with an energy sword, jetpack and shield, it’s up to you to make it through a bunch of tricky stages and capture some evil aliens that are on the run. I wouldn’t worry about the details here, Gunborg just wants to give you a reason to boost around futuristic hallways and blast robots to bits. And blast you will. 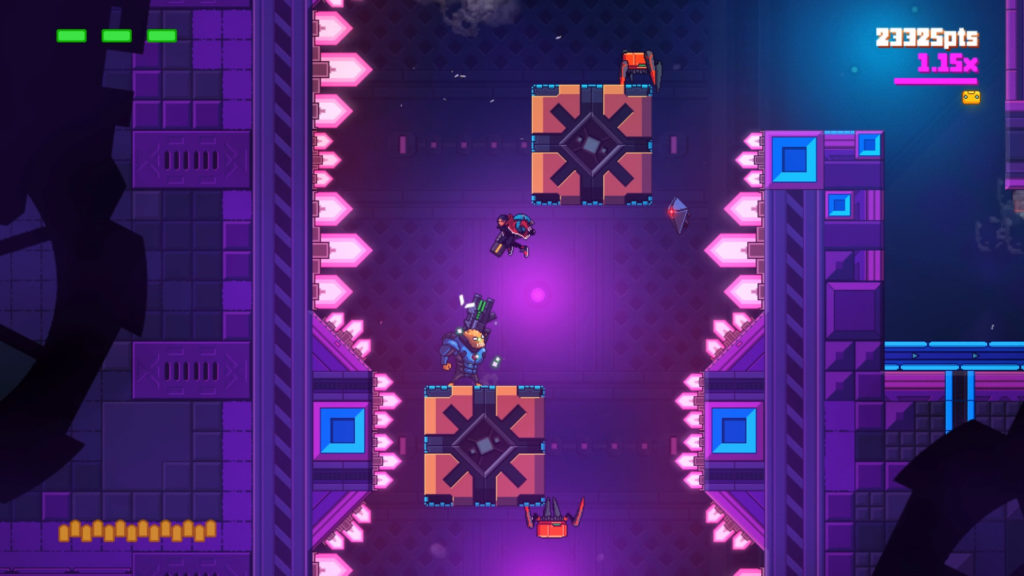 It might take you a moment to get to grips with the controls, but once you do they’re second nature. Being a twin stick platformer, all of your actions are assigned to the shoulder buttons. ZL may not sound like the ideal jump button, but it really does work. Then you’ve got ZR for your fire button while you aim with the right stick. Sounds easy right? Well think again.

Each stage is packed full of bad guys chomping at the bit to kill our hero, and with only 3 hit points it won’t take long for her to fall. That’s where the shield comes in. With its handy reflective abilities, all you have to do is point it in the right direction and those robots will get a taste of their own laser-y medicine. There’s very little more satisfying than bouncing projectiles back at these metallic fools, especially because they’ll drop their weapons for you to use when they die. 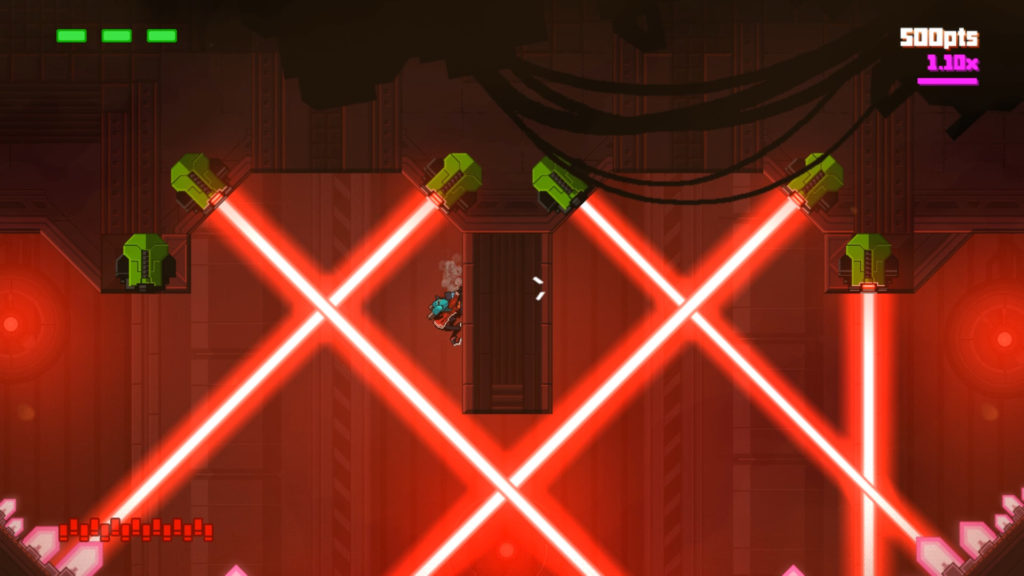 There’s a fantastic selection of weapons for you to use, and they’re almost all rather useful. There are standard machine gun and shotgun type weapons, as well as some more interesting options like a flamethrower and a bouncing bomb launcher. By building up your combo meter (which essentially entails not getting hit) you’ll imbue them with dark energy making them more powerful and giving them extra effects. One machine gun has bouncing bullets when it’s imbued, another gun fires a massive orb that blasts lightning at anything even remotely near its path. This is absolutely as cool as it sounds.

You’ll need to take advantage of all these guns if you want to survive in Gunborg: Dark Matters, because the enemies get real tough real fast. From twin sword wielding samurai to massive mechs protected by shield bots, you’ll need to dodge, reflect and blast with perfect precision if you want to survive. The boss fights are especially tough, requiring you to dodge wave after wave of screen decimating attacks before finally landing a hit or two. There are only a few boss encounters, but each of them is as memorable as it is difficult.

It’s also worth mentioning that enemies aren’t the only thing trying to kill you in Gunborg. The stages are just as likely to cause respawn after respawn, with spikes, lasers and moving platforms littering the spacecraft. Thanks to your jetpack you can actually quadruple jump, which makes all the difference against these hazardous environments. Before you know it you’ll be flying over moving boxes as they block lasers, then using your shield to bounce across spikes to make it to safety. If that sounds incredibly badass, that’s because it is! 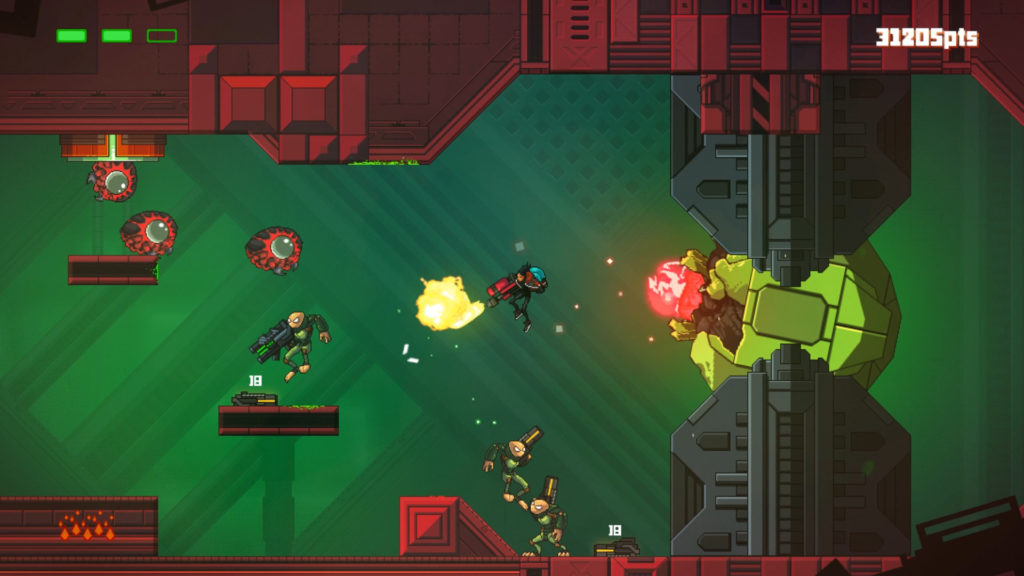 Mastering these abilities is important if you want to collect the three Infobots that are scattered around each level. They are rarely too hard to find, but always involve some serious risk to grab. Gathering them will not only make you a super cool completionist gamer, but will also unlock hardcore mode if you’re feeling brave. Collecting them will also help you get a better rank in each stage, if score chasing is your thing.

Although score chasing and the brutal Hardcore difficulty mode are cool, I have to admit I was a little disappointed at how quickly Gunborg ended. I’m all for shorter games, but after less than 3 hours of laser blasting fun I just wanted to keep playing new stages. It feels a little unfair to expect more though, and if anything just shows how much I was enjoying the game.

Gunborg: Dark Matters really took me by surprise. I wasn’t prepared for the high octane action to click with me quite so much, but click it did. With fantastic twitchy gameplay, a great variety of enemies and some devilish platforming, it really is the full package. If you’re looking for a frantic and arcadey platformer that’ll keep you coming back, Gunborg is a sci-fi adventure you can’t afford to miss.

Over too quickly
Will be frustrating for some

Gunborg: Dark Matters is a fantastic twin stick platformer, with a ton of variety and frantic twitchy action.