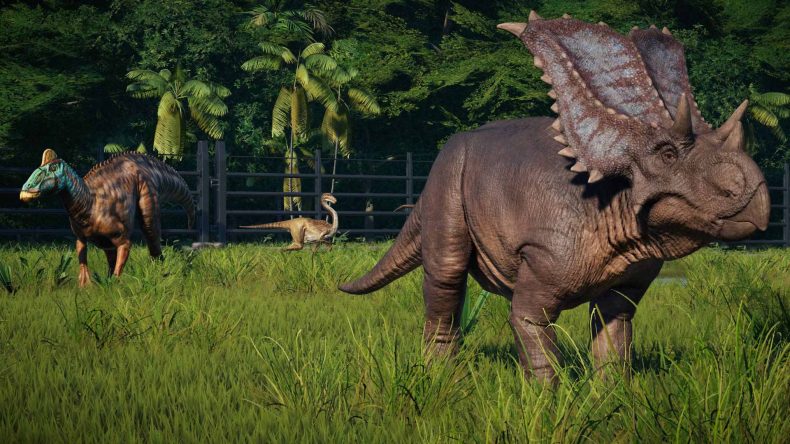 I remember when I was a kid, my grandad helped me build a little park for my plastic dinosaur toys. There were pens with bigger fences for things like the T-Rex, all made up of pieces of other toys sets that I had at the time. It was magical, as it was the closest thing I had to building and running my own Jurassic Park, plus I was still just about young enough that I could still get away with it.

Then, in 2003 Vivendi released Jurassic Park: Operation Genesis and that same feeling of childlike glee swept over me. Not only could I build and run my own Jurassic Park, I wasn’t relying on my imagination to bring it all to life; everything was happening in real time, right before my eyes. And here we are now, fifteen years later and with two very successful new movies bringing, somewhat ironically, the old Jurassic Park franchise back to life; now it’s the turn of Rollercoaster Tycoon developer Frontier Developments to allow me to realise my childhood dreams again. Only this time, it’s narrated by Jeff Goldblum. While not a story-driven game, Jurassic World: Evolution does take place after the events of the original movies. The Isla Nublar site is down, as are those on the other four islands that make up Las Cinco Muertes; otherwise known as “the Five Deaths,” which doesn’t sound at all foreboding. It’s canon, however, so don’t question it. It’s up to you to rebuild these parks, with guidance from the wonderfully sarcastic Dr Ian Malcolm; the previous director of Jurassic World, Claire Dearing, voiced by Bryce Dallas Howard; and even Owen Grady, unfortunately not voiced by Chris Pratt, probably because the budget had already been spent on the other two.

Starting on Isla Matanceros, you’re taught the basics of building and running your park; from sending out dig teams to gather fossils, to building a Fossil Centre in order to extract any DNA found in those fossils. I just said “fossils” an awful lot. Fossils. Anyway, the game does manage to ease you in quite nicely, despite the sheer number of things to take in. In fact, you’ll probably return to this first island a lot, even once you’ve unlocked more of the islands. Another reason for returning, however, is unfortunately due to the slow progression and even the steep difficulty curve upon unlocking the second island. I mean, the second island is named Isla Muerta, roughly translated as the Island of Death. Yep. Ian Malcolm even jokes about that, when you arrive. This second island is beset by storms, which can damage things like power stations and even fences, possibly leading to events not dissimilar to the movies. You also start with much less money and no way of transferring funds from the first, mildly successful park. You can, at least, share fossils between islands, so you can pay for digs with one island’s Expedition Centre, but sell unviable fossils on another island to reap the financial benefits there. I struggled for the longest time on that second island, unable to build an ACU centre in order to tranquilise the escaping dinosaurs in time. Two animals ran off into the wild, leaving me with a seriously depleted park and even less money to fix the problems. It felt pretty harsh, almost putting me off continuing.

Luckily I persevered. I realised that Jurassic World: Evolution does excel in its core gameplay, and I just had to overcome that early stumbling block in order to discover the path to a game brimming with quality. The third island that I unlocked helped with that: Isla Nublar. I’ll come back to that in a minute. Unlocking each new island requires you to reach a three-star rating for the previous island’s park (except for Isla Nublar), which is done by keeping your guests happy or by fulfilling contracts for each of the three divisions that help to develop your parks: Science, Entertainment and Security. You’ll periodically receive a contract that you can accept or decline, depending on whether or not you think the terms are currently achievable. Fulfilling the requirements will result in nice finance boosts, and sometimes one will come along that is insanely easy; at one point, I was already set to incubate a new species, when I was asked to do just that. Easiest (in-game) money I’ve ever made. I said earlier that you’ll enjoy returning to that first island, but once you’ve unlocked Isla Nublar, you may find yourself returning there often. This is because that original island, the home of both Jurassic Park and, later, Jurassic World, is a sandbox setting that gives you unlimited funds to build whatever you want. You are only restricted by the species you’ve already cultivated, because you cannot do any form of research or development there. This is probably for the best, as it would essentially break the game. It does take some of the pressure off however, as it allows you complete financial freedom and even gives you the tools to switch off animal escapes and power outages, etc.

Actually looking after your park(s) isn’t too different from playing Zoo Tycoon, only everything feels that little bit more streamlined. You send out a dig team, process their findings, before incubating any dinosaurs that have at least a 50% complete genome and releasing them into your chosen enclosures. Building it is a little more complex; having to build the relevant centres to keep dinosaurs (and people) alive, not to mention all the power stations, substations and pylons required to keep everything online. You’ll soon find yourself settling into the rhythm of landscaping, building and running your park; balancing expedition and fossil management with keeping feeders stocked; and before you know it, you’ll have your very own Jurassic World.

It all looks and sounds exactly how it should too, from that iconic John Williams theme to the dinosaur roars and calls. The animals roam and mingle within their paddocks, or fight each other if you get the mix wrong. They’ll even attack the fences, escaping if you haven’t implemented the right security measures. If you haven’t got an emergency bunker in place, you’re going to have to act fast. You can even take control of the ACU helicopter and fire the dart rifles yourself, if you so choose. The attention to detail is incredible, especially in the animation for each animal and even the physics of the vehicles. Sending out a dig team could easily have just been a menu selection, but you’ll be able to watch the team’s helicopter leaving the pad and the area. It’s exceptionally presented.

Being a huge fan of the film series, I was both excited and worried by the prospect of this game. Licenced games are often a bit of a mess, but Frontier Developments has done what it does best: creating a park management game that doesn’t skimp on the detail. It perfectly captures the presentation and although it stumbles a bit on the difficulty curve, plus every action taking that little bit too long to complete, the core gameplay absolutely nails the feel of building your own Jurassic World. Without the need for plastic dinosaurs.

Difficulty ramps up a bit too quickly
Progression is slow

It's quite slow to start and has a pretty harsh difficulty curve, but when everything clicks, it proves to be the best use of the Jurassic licence yet. Running a park isn’t easy, but incubating your first velociraptor makes it all worthwhile.