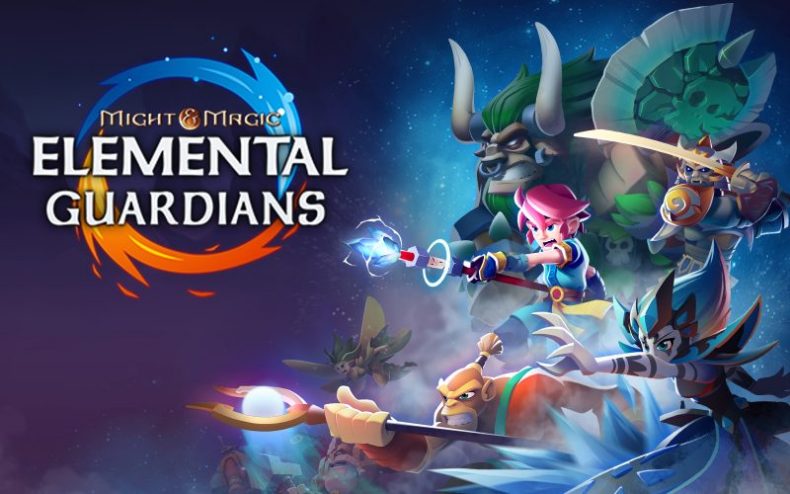 When playing a game about magic, elves, fairies, dryads, gryphons and samurai ninjas, recalling Iron Maiden should be the furthest thing from your mind, yet here I am playing Might and Magic Elemental Guardians and all I can think of is the number of the beast. This may seem like an odd way to start a review about a free to play game based on the Might and Magic franchise, but this F2P RPG shares a format with Roadhouse Games’ (RIP) Eddie themed RPG Legacy of the Beast, which coincidentally I also reviewed.

Whereas with the Iron Maiden game you were Eddie looking to piece himself back together, here you’re a student of a magic academy studying magical creatures which spawn from soulstones. It is your job to raise and battle with these creatures through a series of wave themed turn based battles with blooming great dragons waiting for you at the end of each themed area. Clearing each node awards you experience and items, while like most F2P games, regular log ins and daily missions throw materials at you to convince you to carry on playing, and, it works. You won’t want for energy – at least at the beginning – and your creatures improve at an ok lick with battles, but their XP goes up much more when coupled with potions outside of battle; there are other ways to improve them too. Once a creature has reached the maximum level for their rank you can improve it, taking them from a two star rank to three, for instance, and then needing to level them up all over again. Then you can improve the three skills your creatures have by having them consume other creatures of the same elemental family. And finally you can evolve them once you have the required items, which will require a lot of chests to be opened and a lot of quests to be undertaken.

Battles take the form of your creature team of up to four fighting a group of enemies, each of which have their own elemental affinity. When it’s a creature’s turn to attack you choose the ability to use, the game then displays an arrow (green, yellow or red), and you choose which enemy you want them to attack. It’s pretty simple stuff in that regard. Where it gets more complex though is how your creatures attacks can buff their fellow party members, with either improved haste, strength or critical chance, and also the same goes for your enemies. Thing is, games like this obfuscate progression systems behind many different facets for two reasons, to give the illusion of depth and to slow down real progression. The fact that levels are one thing, but you can separately improve skills, then evolution. Everything is done by consuming something else, and these are all gained by grinding the game. Eventually you hit a difficulty wall and need to go back and do things on higher tiers for more XP and loot, that will only get you so far before the wall hits again, and this rotation gets smaller and smaller because there’s only so much you can do without spending money.

F2P mechanics can be good, if they’re done right, but when you can’t be certain of tangible benefit after spending money it becomes hard to justify, and here I have to question just how far many will allow themselves to go without biting at the store’s teet. The drip drip drip of creatures and materials is agonisingly slow, and you’ll find the glut of levelling up potions slows exponentially very early into the game. I know they need to make money, but I really wish there was a way to charge for the game to do that, or to not complicate the progression systems so much, because this is a pretty good game outside of the nickel and diming. Balancing your team, ensuring their buffs compliment others abilities, heck even the times when you crack open a soul stone to get a new creature it’s all very nice, nicely presented and designed to hook you. Thankfully there’s at least a glut of things to do. There’s the main missions, then you can re-do those at higher tiers, then there’s separate missions in similar areas and arena battles against other people, and you’ll have plenty of energy to take it all on as much as you want during a day. It all looks really nice, and it’s presented lovely and all, but your mileage will vary as much as you find F2P mechanics palatable.

All in all, take the F2P mechanics out of the equation and considering this is free you’ll find a lot to enjoy here because there’s a load of content to take part in when you come up against a wall. Roadhouse Games’ Legacy of the Beast was uninteresting outside of its Iron Maiden soundtrack, at least here there’s so much to do, and it’s so much nicer to look at; as a result this is certainly worth a look, you have nothing to lose at all, and considering it’s a decent RPG-lite you might just like it…just like I do.

There’s a decent RPG here under the F2P veneer, look past that and you’ll find a load of stuff to do.