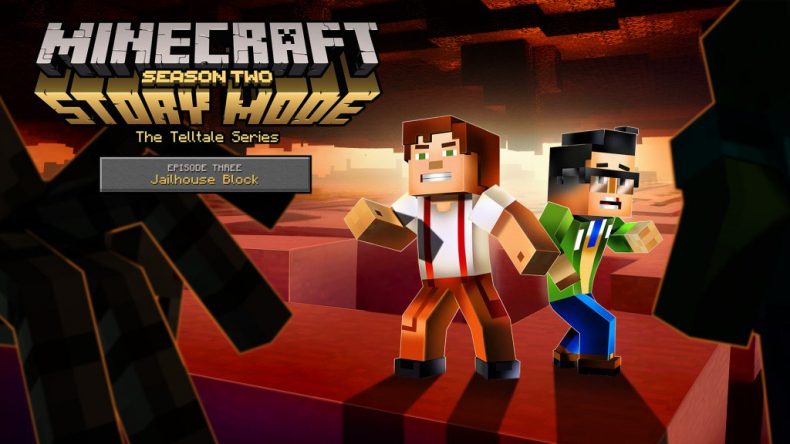 Episode three continues with the fast paced action of the previous installment with another short episode that is packed with action and intrigue. The continuing theme of leadership and inspiring others to the same continues with some more overt references to it and opportunities to help some of the more obnoxious characters in this series get some redemption.

Jailhouse Block begins where Giant Consequences left off with Jesse being cast down into the depths of the Nether into mysterious location that we soon discover is a Prison of some sorts. I am continually amused at this series’ ability to constantly mine the source material for ideas and the Prison block is a great source. I’ve never actually played on one of the community built and maintained “Prison Servers” but the ideas and principles of those heavily administrated servers are carried forward into this episode and work very well with the idea of the overarching baddie being an “Admin”. There are plenty of areas where downtrodden “Guests” have to perform various activities within the prison and all within very strict parameters – the most obvious one being that no-one should have a sword in their inventory.

The episode is jam packed with action which is great to see, and there are more opportunities to build and craft as well as some simple problem solving with a sequence of levers. I am very much enjoying these more interactive episodes as previous instalments always felt a little dry in this aspect. By allowing some of the more creative aspects of Minecraft to filter through into the heavily scripted events maintains the illusion that there is some freedom and scope for playing through how you wish. I am yet to be convinced, however that the moments where the pop-up detailing that your story is changing have any meaningful significance to where Jesse and her friends end up.

Despite being an action filled episode, there are some quieter moments where Jesse can talk to different people within the prison to find out a bit more about what is going on and who the Admin is. These quieter moments actually work really well and help forge some developing characteristics for Jesse and her friends. In particular I have enjoyed watching Radar’s character change and grow in the light of constant support and encouragement from Jesse. Again, I am unsure whether this was always the path that Radar would walk on, but this episode further maintains the illusion that your choices for Jesse have had a direct impact on Radar.

Minecraft: Story Mode is predominately a series for children, but there are some great jokes in Jailhouse Block aimed at the adults who will be playing along with their young ones. I chuckled along at a few visual gags a couple of times and there are some great one liners from a few characters. Jack, my new favourite character, makes an appearance and continues to delight me with his heroic bravado shtick.

A particular stand-out in this episode for me was the music. I haven’t noticed it in any great detail before, but it works exceptionally well in Jailhouse Block. There is an extended sequence of peril for Jesse and Jack as they run from a variety of hideous zombies and creeper/spider hybrids, and the music that accompanies it is suitably tense with lots of synthesized bass that communicates very well the excitement and danger of what they are doing. Whilst the soundtrack was exceptional, there were a few audio issues I experienced with character dialogue merging with other characters almost like the the speed at which some conversations were being played out wasn’t quite in sync with each other. It happened on a few occasions and was just enough to be distracting. The audio issues were once again a reminder that I really wish Telltale Games would update their engine for these story games.

The only criticism of Jailhouse Block is the extremely abrupt ending. It felt like the episode had just reached it’s flow and then it was over. I understand the need for a cliffhanger, but it wasn’t even that, there was a brief glimpse of some glowing eyes and then it ends. I am keen to see where Jesse goes next, and in particular who the mysterious Prisoner X turns out to be – an ally or another baddie Jesse will need to overcome.

Jailhouse Block is another strong episode, it feels much more action packed than any episode has been across both seasons which is great. The story is developing into a fun and interesting one and I am pleased at the direction of the characters. For now the façade that choice is an option continues with the growth of Radar as a character and a I am very much looking forward to episode four.

Some audio issues
Ending is a bit abrupt

Jailhouse Block is an action packed episode with some great humour and exciting set-pieces.