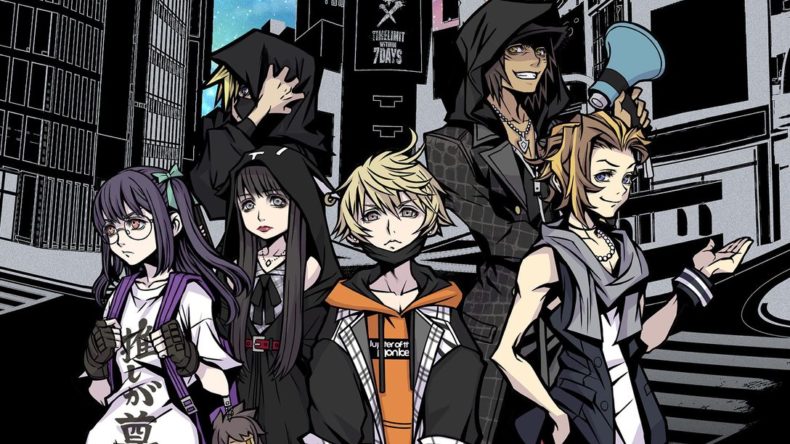 There’s something inherently cool about NEO: The World Ends With You. The punk rock attitude; the killer soundtrack; the outfits and pins; and the comic book cutscenes. It’s packed with visuals that constantly impress, and characters that are likeable and relatable. In my time with Rindo, Fret, and everyone else in the Reaper’s Game, there was never a time when I didn’t enjoy playing it. NEO: TWEWY feels like Persona 5’s hip little sibling, and I couldn’t get enough.

NEO: The World Ends With You: Awesome characters and a vibrant city

With another Reaper’s Game underway, Rindo and Fret find themselves thrust into a battle of life and death. With so many teams fighting for the top spot, the Wicked Twisters must find a way to win and bring themselves back from the brink of existence. While the story is interesting throughout, it’s the wealth of characters that make NEO: TWEWY so enjoyable. Fret is a loveable dope, Nagi is a vanilla nerd, and Sho is the stern and surly friend. The other teams have members that are both cutthroat and kind. Some want you to fail, and others occasionally offer a thread of assistance.

A lot of the time you’ll see interactions play out in cutscenes that resemble a comic book. Panels pop up and dialogue is either spoken or available to read. It can happen organically as you move around Shibuya, or statically. Regardless, the characters are so diverse that it rarely gets boring when involving yourself with others. NEO: TWEWY is gorgeous. These interactions are cartoony and flashy. The city of Shibuya itself is full of detail. It’s a vibrant location with lots to do, and the way it looks has a lot in common with the Persona series. 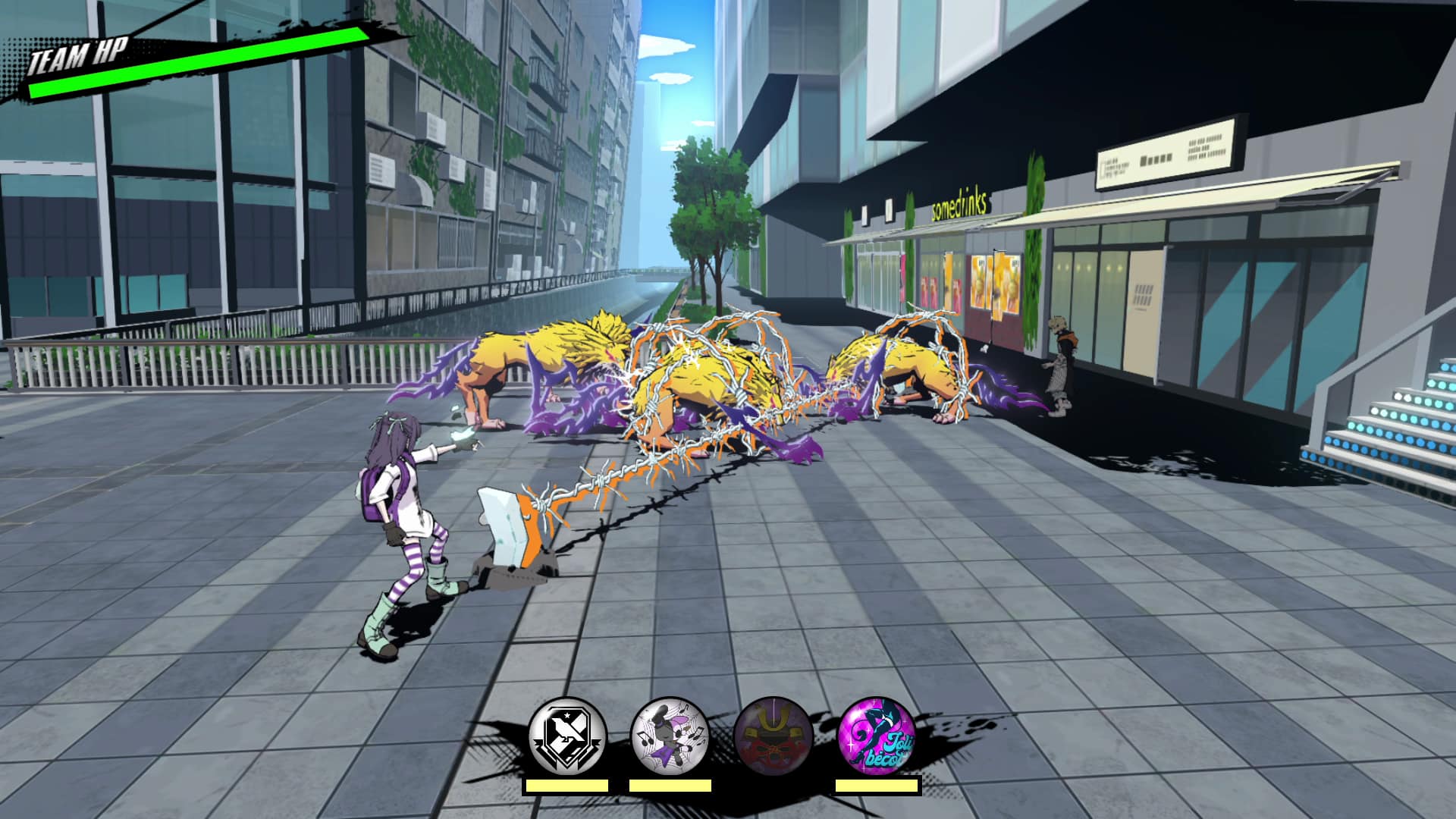 The story takes place across different days. Each day you’ll have a challenge to complete, normally issued by the sinister Game Master, Shiba. They often take the form of layered puzzles. One of the early puzzles has you trying to uncover a phone number by finding digits across the city. For the most part, these give a nice change of pace from the action, but they can sometimes go on for a bit longer than necessary. Shibuya is filled with shops and restaurants to visit. These shops have a variety of clothes to purchase, pins to buy, or records to add to your ever-expanding music collection.

By equipping clothes to your party, they’ll add a permanent boost to either your HP, ATK, or DEF. New pins give you more opportunities in battle, and visiting Tower Records lets you unlock more of the game’s fantastic music to add to the library. As for the restaurants, you purchase a meal for each party member, and their stats can be improved this way. If you buy their favourite, the rewards will be greater. There’re tons of places to spend your Yen, and they’re a great way to help you up your stats.

In NEO: TWEWY, you’ll spend a lot of time fighting the Noise. These monsters are a constant threat, but unlike a lot of JRPGs, you can choose when you want to fight. Scanning areas will reveal their location, meaning they’ll only fight you if you’re actively scanning. It’s a nice touch because it allows you to freely explore the city and upgrade your gear without having to fight all the time. Of course, if you need to level up and get into a scrap, pressing the R1 button reveals nearby Noise encounters. 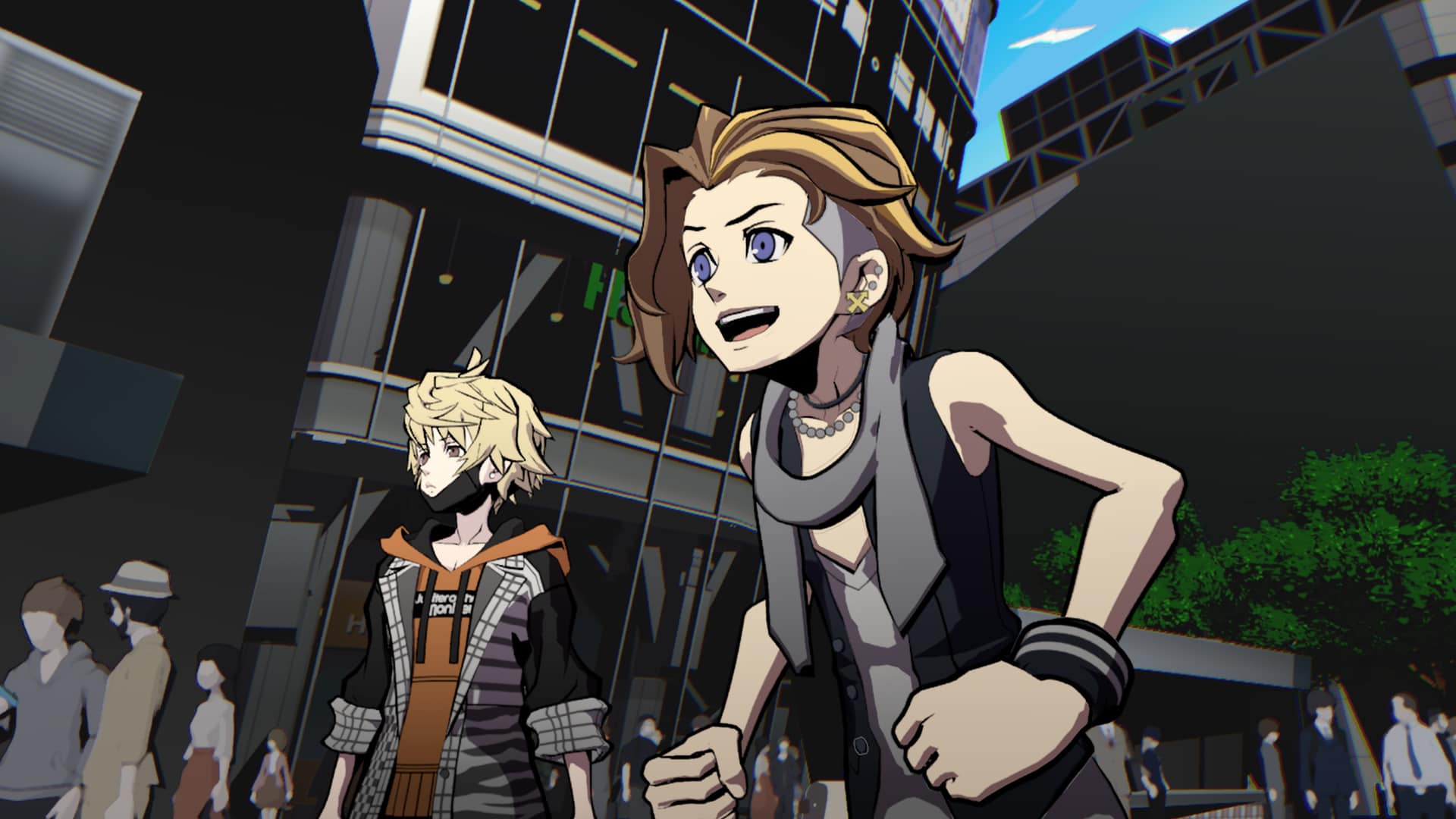 Combat is particularly special in NEO: TWEWY. Whilst the fundamentals remain the same (dodge and jump), the options for how you attack feel almost endless. Each of your party member’s attacks are mapped to one button. This allows for fluid combat without having to think too much about what buttons you press or any combos you have to initiate. The real magic of a battle comes in the form of pins. Like the original, you select different pins depending on the way you want your party to function.

NEO: The World Ends With You: So many cool pins

Each pin (and there’re tons) has a specific power. Some fire bolts at enemies from afar, others require a close-up attack. You can use support powers in battle, as well as attacks that have a certain affinity such as fire or electricity. Each pin can be leveled up, with some evolving to provide a deadlier attack. New pins can be purchased, but they can also be acquired through enemy drops or completion of certain quests. When you’re in a fight and all these powers are happening in sync (think Indivisible), the simplicity of these mechanics help you to enjoy it from both a gameplay and visual point of view.

Something called a Beatdrop Gauge will pop up during a battle. By using another pin before it runs down will do more damage to an enemy. Powerful attacks called Mashups can be performed as well, and this will boost your damage for a short amount of time. Combat is varied enough in NEO: TWEWY to make each fight a lot of fun to take part in. You start to get a feel for how your party works together, allowing you to refine the pin selection and the way you use them in a battle.

If you want to increase the chance of enemy drops and build up your XP, you can chain together battles. In the scanning phase, moving to multiple Noise icons will make them follow after you. Stand still and all of these battles will form a chain. For example, if you’re fighting three waves of enemies, they’ll get progressively harder, but drops will be more bountiful.

Every mechanic plays its part

Outside of combat, each of your party has a specific Psych ability that helps to progress the story. Whilst they can’t be used at will, they provide useful tools to get the job done. Fret can help certain NPCs to remember important information. By using the analogue sticks, you put a jigsaw of sorts together to reveal a clear image. Nagi can dive into people’s minds and help them rid themselves of Noise sickness. This opens up a fight, but the visuals are more dreamlike. As for Rindo, he can time travel. It’s a shame you can’t do this as and when, but it’s still a cool process when you get given the option. 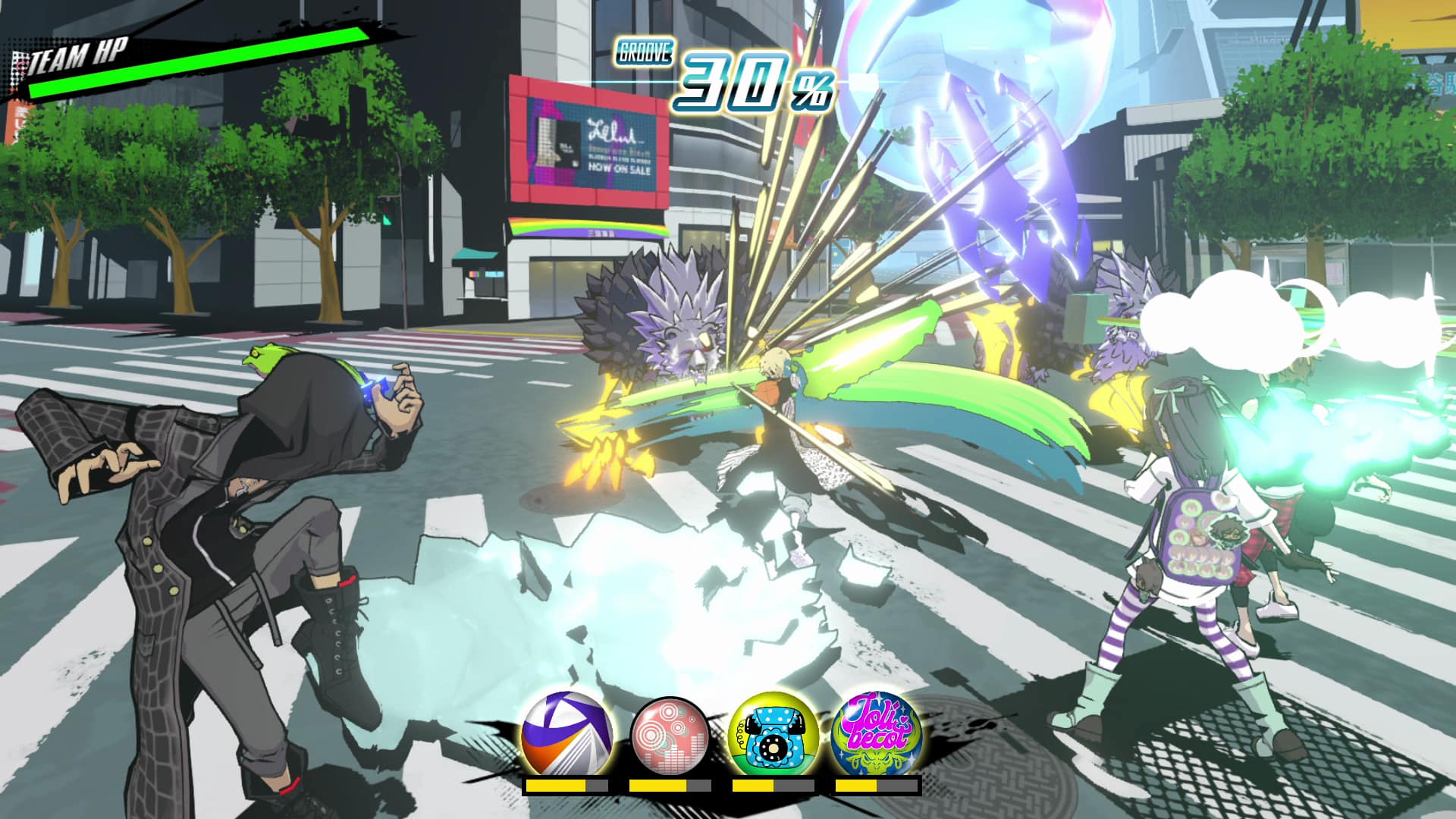 By progressing the story, you can spend something called Friendship Points to unlock new abilities via the Social Network in your menu. These abilities come in really handy, and can help in a multitude of ways. Some can be really helpful, while others improve the quality of life. The emphasis on characters is not only to help the story, but to build on the already robust mechanics. Square Enix have such a wonderful game on their hands, that it’s hard not to appreciate everything it has to offer.

NEO: The World Ends With You is brimming with excitement. The plethora of pins make combat constantly enjoyable, and it always feels like it’s evolving. Shibuya is gorgeous, and the art style is sublime. I can’t hype the soundtrack up enough, either. It caters to every kind of music fan, and even if you’re not a fan of hip hop or heavy rock, every song is amazing. The story is great, with some nice throwbacks to the original, and the wealth of upgrades and things to do make it a must play for any JRPG fan.

Some missions drag on

NEO: The World Ends With You is brimming with excitement. The combat is so good, and the various mechanics all work well together. The soundtrack is superb as well, with visuals that never grow old.

You may also like
NEO: The World Ends with Yousquare enix