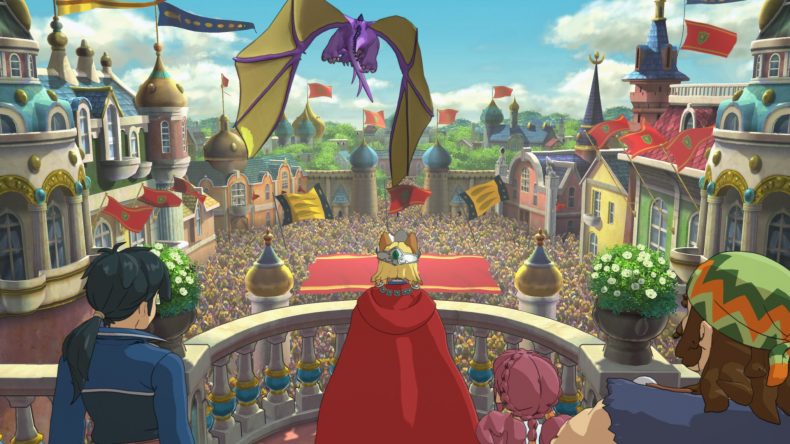 I never felt the same love for the original Ni No Kuni that others did. I mean, yeah as a new father in 2010 I cried a little at the beginning, but otherwise the story never gripped me and I really didn’t like the combat system. I found the dual familiar and character setup a little too convoluted and fell out of the game well before I finished it, for that reason I was a little nonplussed when sequel was announced at PSX in 2015. How wrong was I?

The story starts oddly, with the President of the United States (not Trump, thankfully) falling victim to a nuclear blast but then finding himself in the kingdom of Ding Dong Dell just as a coup d’état is going on. Prince Evan Pettiwhisker Tildrum finds himself without his father (the King) and the Mice of his kingdom are revolting, throwing out Grimalkins (cat people) and of course, half-grimalkins like protagonist Evan. Once you’re past the rather odd set-up it’s hard to not get wrapped up in Evan’s desire to become a king and found his own kingdom.

The step up in looks is plainly obvious from the start. The characters are beautifully rendered and expressive, the Ghibli touch has been slightly lost but it hasn’t stopped the designers from creating a great looking cast. They’re animated superbly as well, watching Evan’s cape swish as he runs never gets old, and even when there’s no voice acting in some scenes the facial expressions and body language carry the emotions through very well. The locations also have a great sense of place to them, they feel like they could be actual places. The neon coloured yet ancient Japan styled casino city of Goldpaw that worships lady luck being a supreme example of a well realised city. There’s a phrase that I never thought I’d use in a review and that is Ludonarrative Dissonance, but with Ni No Kuni 2 it’s hard to ignore. Evan wants his kingdom of Evermore’s values to be ‘a world without fighting’ – he wants to bring all the kingdoms under this banner so they can be united against a common foe, but to do this he’s going to fight his way there, fight while he’s there, and fight all the way back home, for a pacifist Evan sure likes to get stuck into a scrap.

And scrap he does! Evan is considerably hands on with his fighting, equally capable in melee or at range in the game’s rejigged fighting system. Gone are the familiars and instead you assume a more direct control over proceedings, regular attacks on the face buttons, while ranged attacks are executed with the right bumper which consumes mana. You also get up to four skills you can use in battle, which are then triggered by pressing the right trigger and then a face button. As Evan’s quest moves on new skills become unlocked which do considerably more damage, but at the cost of more of your mana points.

Good management of your mana points and your weapons is required as each member of your party can hold three melee and one ranged weapon, while the ranged is powered by mana the melee ones have no such restrictions, but making contact when using them refills your mana gauge and builds up that weapon’s ‘Zing’ gauge. Now a used skill can deal a lot of damage, but this can be embiggened by using a weapon with 100% Zing. Using the right skill with 100% can see you wipe out a whole group of enemies and move the tide in your favour. Speaking of which, you’ll find yourself feeling empowered even against enemies which are a much higher level than you. Skills are one thing but you’re backed up by little sprites called Higgledies, these little chaps can provide healing, buffs, or attack for you, and what they unleash is not to be sniffed at. If you keep an eye on them and use their abilities regularly you’ll find you can take out much stronger enemies than you thought possible. In fact you won’t really feel you’ll need to grind until around the halfway mark when things do ramp up a bit more in terms of difficulty, this makes it much easier to really get into the, frankly, brilliant kingdom building.

Seriously, it’s easy to get lost in this part of the game for days. If I’m not emptying my coffers, collecting stock from my stores, conducting research, or upgrading buildings then I’m asking around for people to come and join my kingdom, or performing side quests to get them to come and join me. Your kingdom is separated into plots on which you can build stores, facilities and organisations. The more of these you have the more money you’ll earn per minute and the faster your stores of items will build. The citizens of your kingdom will need to be assigned to these locations, opening up research opportunities into things like new weapons, armour and even extra Higgledies to join you in battle: the micro-management potential here is almost exhausting.

So enamoured with this mode was I, that I almost found it a disappointment that I had to leave it to continue the story so I could recruit more people. Levelling up your kingdom can only happen when you have enough people living there, and regularly there will not be anyone willing to move until you have fulfilled certain story conditions. This isn’t really a deal breaker though as the whole adventuring side is so good, but I could really take a whole game based around managing my Kingdom. Not quite as successful, though, are the game’s RTS-lite segments. Once you’ve recruited people who can fight, you can assign up to four groups to go into small skirmish style battles against armies. There’s a rock paper scissors element here with spears being more effective against swords, hammers being more effective against spears, and swords with hammers, so you’ll need to choose your battle partners well to make use of this. During the fight you can use the right and left bumpers to rotate your fighters in those directions to make sure the right group is fighting the right opponents.

In battle you have a resource called Military Might, and this is used up in a variety of ways such as using skills, building structures, or calling for reinforcements should soldiers fall in battle. Don’t get carried away when doing any of those things as you’ll be surprised how fast you can consume this resource, and these battles can be long and drawn out. In fact, these fights do go on for just a bit too long, and the difficulty of them ramps up quickly. I’d have preferred more fights of gradually increasing difficulty overall, but also less lengthy ones. The sparseness of the battles means that you’ll find yourself needing to grind old fights to overcome later challenges, thankfully you can take on the battles in a hard mode, you just have to go find old ones first to take them on. At the end of the day though, it isn’t really a bad element as such, just not up to the same level as everything around it.

Ni No Kuni 2 had me glued to my PC. The adventures of Evan and his friends makes getting the laptop out worthwhile. The game looks beautiful at all times and it also runs at a consistently steady frame rate. It’s a game that despite three separate gameplay elements still feels like one cohesive whole and it’s finally filled a void in me that had been waiting for a truly great JRPG. I absolutely adore this game and am confident that you will too.

An absolute joy, like a whippy ice-cream on a hot summer’s day, it’s sweet and fun and you will want more.