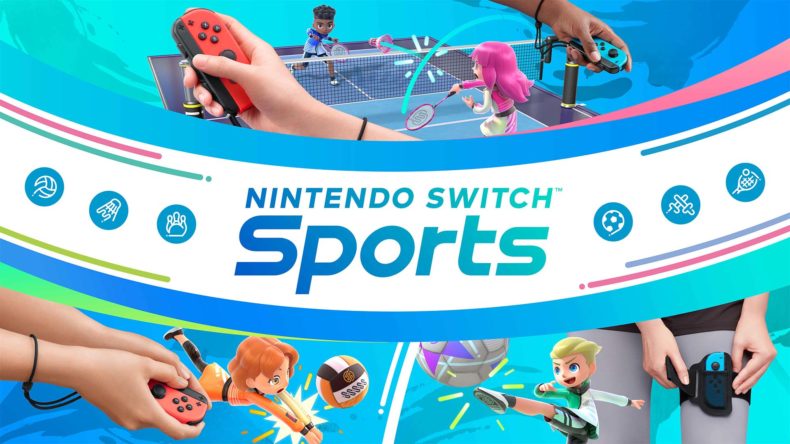 There was a moment early on where I was a little worried about Nintendo Switch Sports. I had just been through each of the disciplines individually, testing out the various options and modes within them, and I felt a little empty. It wasn’t that each sport wasn’t fun, with their own merits, it was just that, in isolation, it felt like something was missing. And that thing that was missing? It was people.

Once multiplayer was introduced, every one of the sports came to life, with frontrunners for “favourite” out early doors, only to be replaced on a daily basis. Nintendo Switch Sports is fine if you just want to play alone, or offline, but it’s absolutely brilliant once you hook up with other humans and test your mettle. 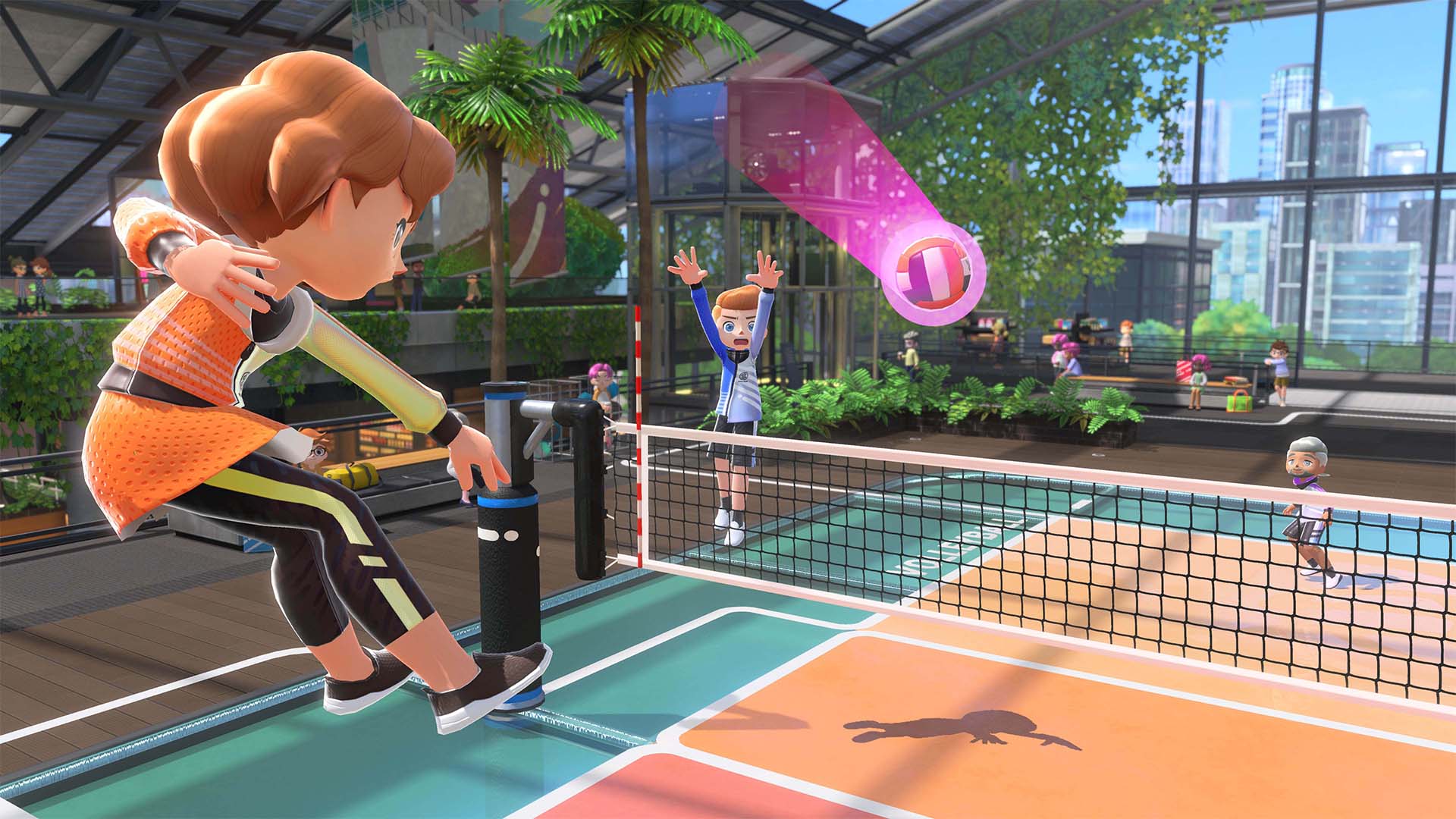 Volleyball, for example, is a brilliant inclusion. Confession time: my son played Volleyball for many years, and I never fully understood the rules of the sport. Two matches with him in the Nintendo Switch Sports incarnation of Volleyball and I not only completely understood it, but I enjoyed it. Yet another example of Nintendo simplifying things so that newcomers can understand it, and yet another example of it working to great results.

Two-on-two action is a feature of the overall game, but in Volleyball timing your “set”, “block”, or “dig” is almost always met with a smile, whereas the “spike” will make you feel like a hero, until you’re blocked, that is.

You’ve played bowling before, and it’s pretty much as you remember it from Wii Sports, and the other incarnations of that phenomenal Wii launch title. It’s still brilliant, don’t get me wrong, but it suffers a little from a lack of “being new”. An obstacle laden lane makes for an alternative mode that is as tricky as you choose, while the 100 bowler online mode is going to be a riot when the game launches. 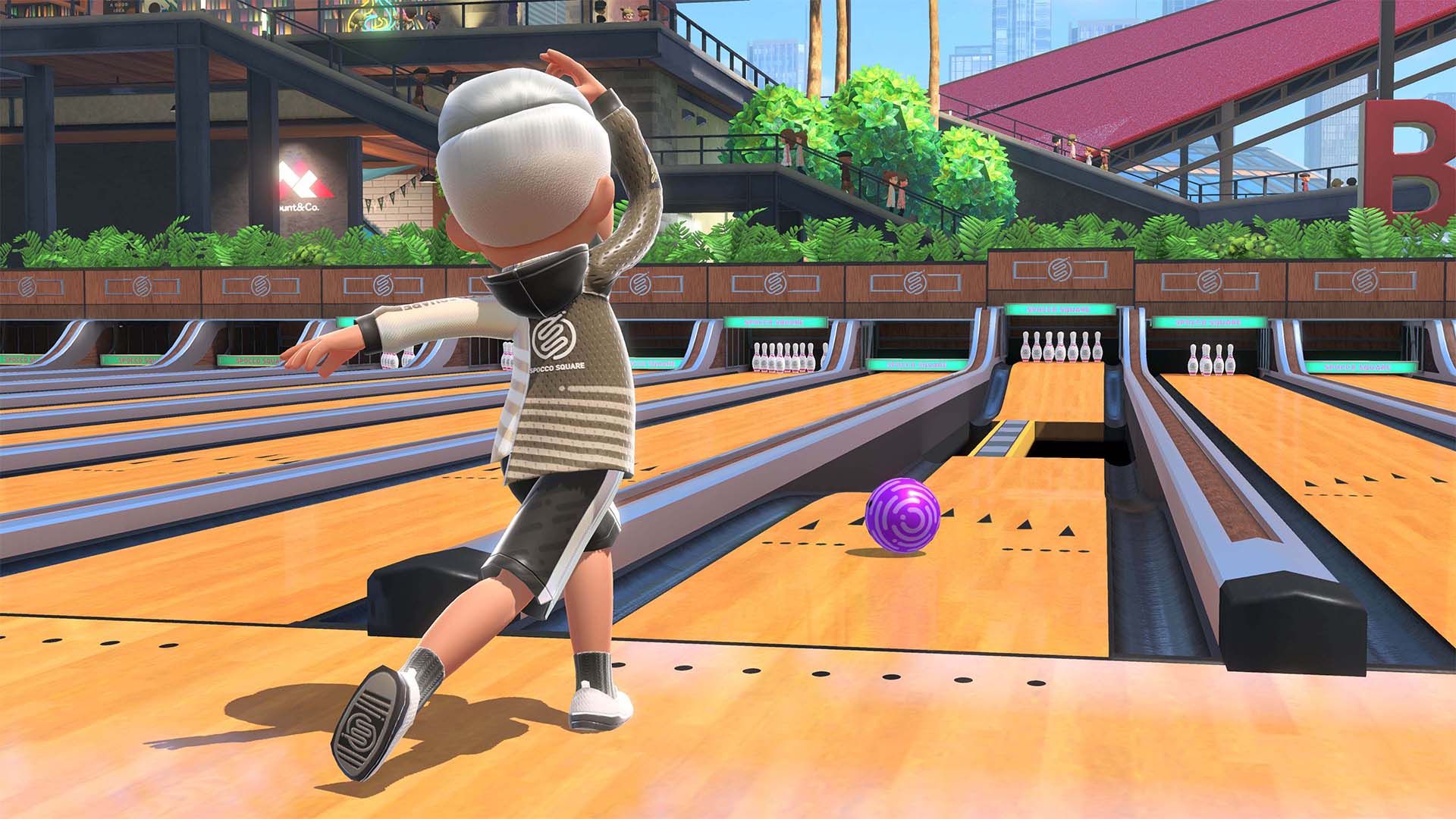 Chambara is another example of simplicity making for extreme moments of fun. Whether you’re watching or playing, battering your friends and family with a stick (there’s also a No More Heroes style chargeable saber and the option to go two-handed with dual swords if you fancy) never gets old. As it weren’t enough, when you win a round they fall into the water, Takeshi’s Castle style.

Then there’s football. I was filled with trepidation over the inclusion of my favourite sport. But colour me surprised: it’s the best sport in the game. It requires a little more “game knowledge” as you’ll need to use both Joy-Cons, with one controlling motion on the left stick, but (and stay with me here) it’s essentially if Rocket League was reverse engineered to be just a football game.

1v1, 4v4, whatever you play, there’s a massive ball and bigger goals. You have to charge around (making use of a Breath of the Wild-like stamina bar that recharges if you leave it alone), swiping with the right Joy-Con to hit left, right, over the ball (to keep it down), or upwards to lob it. This all feels responsive, and is such fun, but then there’s the diving header. Oh my. 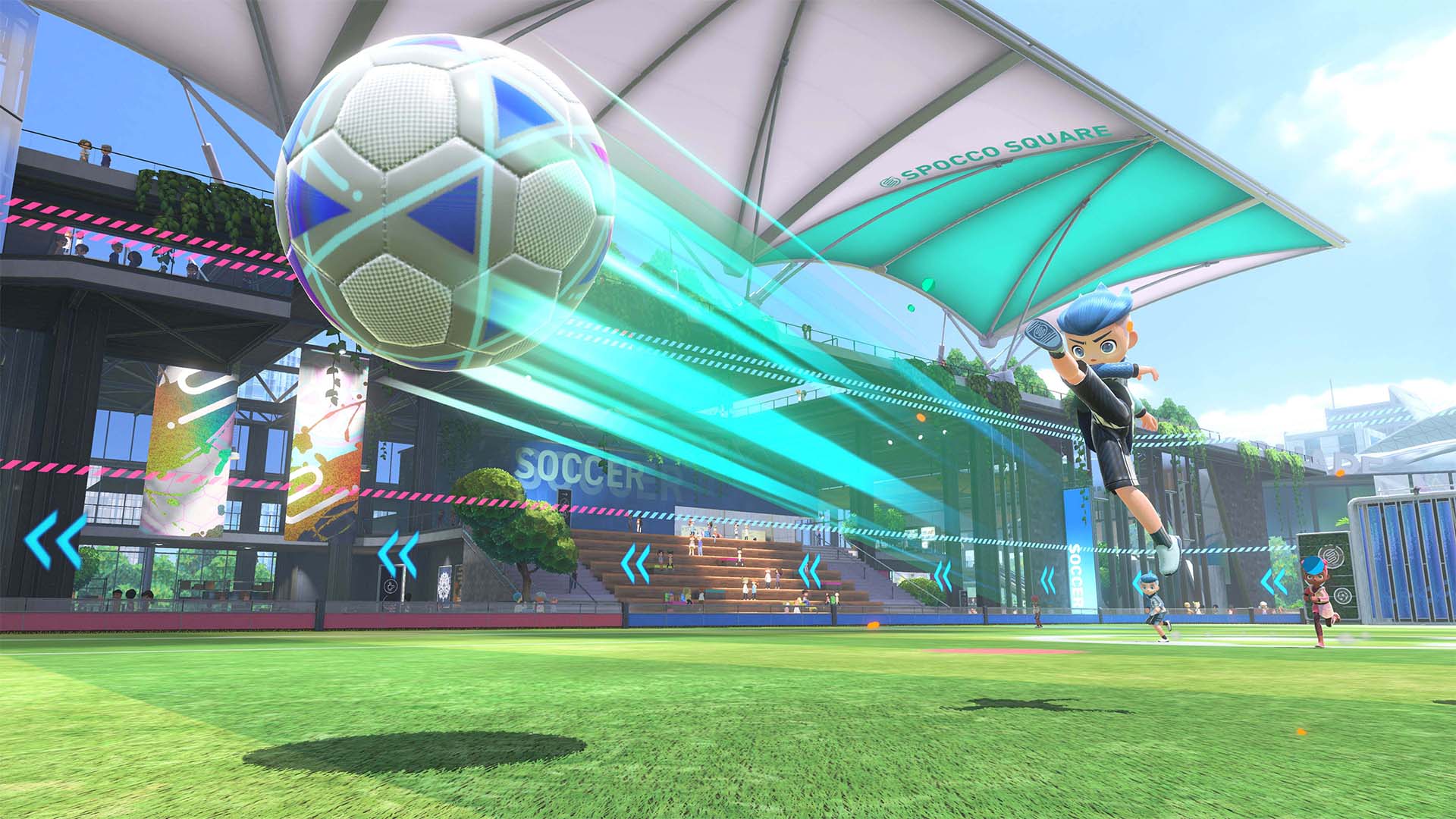 Flinging both Joy-Cons towards the ground will cause your avatar to suddenly lurch into a full on diving header, and this can even be done when jumping (something you do on the face buttons). I have lost count of the hours I’ve spent in the football mode, and this is never not funny.

The option to strap a Joy-Con to the leg and play “real” football is also available if you own Ring Fit Adventure (which comes with the strap) or buy it separately. Of all the ideas within Nintendo Switch Sports, this is the most gimmicky. It’s fun for a while, and the competitive nature within people will make them want to get all five in the back of the net, but after that, it’s rather done. There’s little reason to keep coming back save for a diversion, and it feels like a good idea that’s slightly under baked.

If there’s a major downside to the overall package, it’s likely in the inclusion of two racquet sports. Badminton is genuinely great fun, and creates long rallies whatever the skill-level of the players. Tennis suffers from being a bit “safe”, and unless I was going mad, I couldn’t find a way to do a singles match. I can only presume that Badminton was included to provide a 1v1 racquet sport, because Tennis is doubles only. If you don’t have a partner to play with, and are looking to play versus, you’ll control both players, which can be awkward and a little confusing. 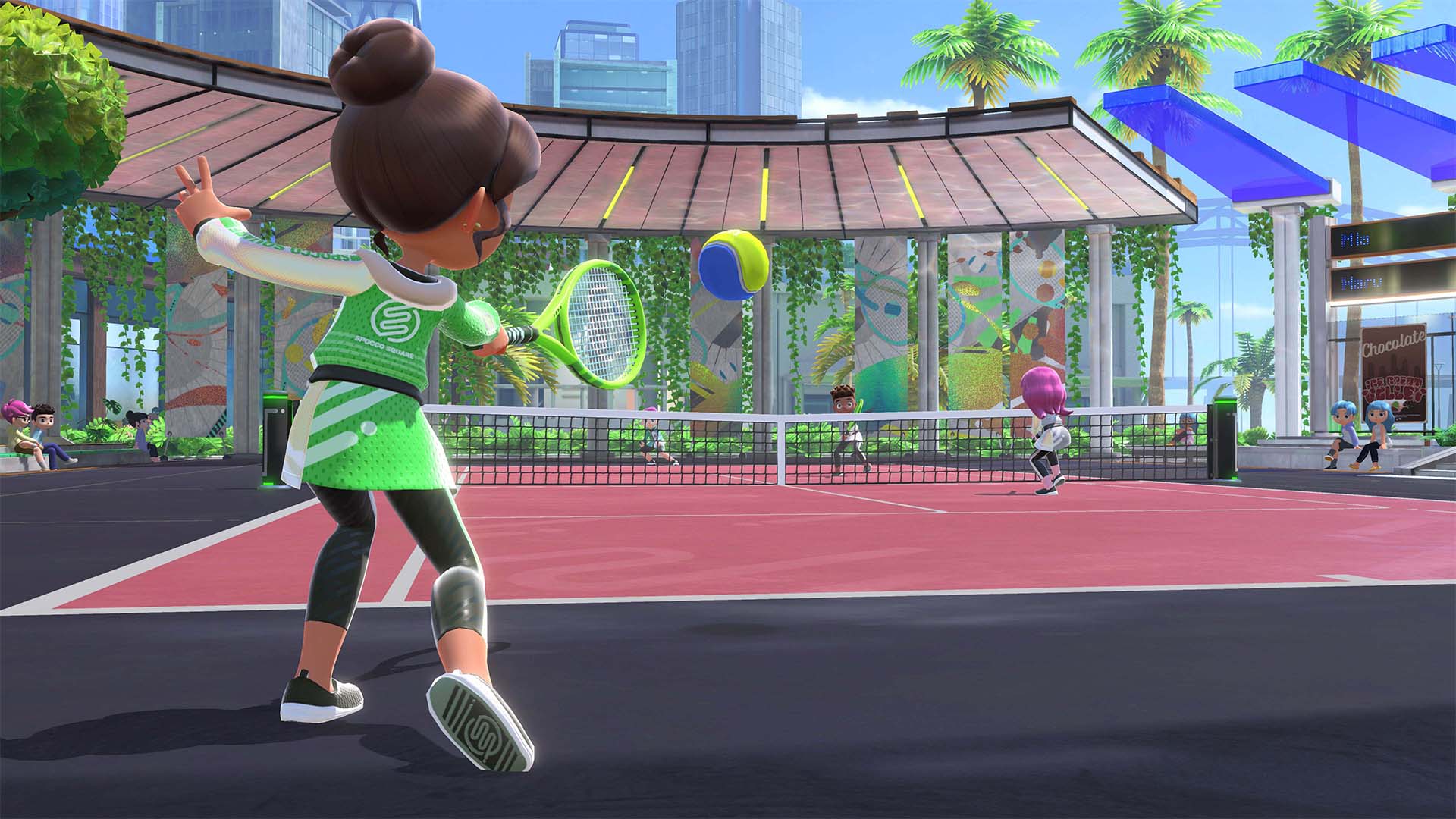 It’s not the end of the world, but I’d rather have had a more different sport like golf in here now (which is coming later), and maybe added doubles and singles as options to both sports, instead of restricting either. It’s a shame you can’t play singles tennis, and it’s a shame you can’t play doubles Badminton. It’s also pretty strange both of these decisions were made.

The only other issue I have with Nintendo Switch Sports is that there’s no offline progression at all. If you don’t go online to play with or against people from around the world, you won’t unlock new clothes and accessories for your character. Really, this is a missed opportunity. There are more than enough modes within the sports to implement a challenge system of some sort, but it’s another reminder that this is a game aimed at online play.

On a more positive note, there are marvellous little touches to the created avatars that will catch you off guard as well. Even Bowling, the returning mainstay, will create a chuckle this way. For example, when playing simultaneously with friends, you will still start each frame together, and if you finish first, and your opponent messes up, your avatar will suddenly spasm into a rictus grin at their misfortune. 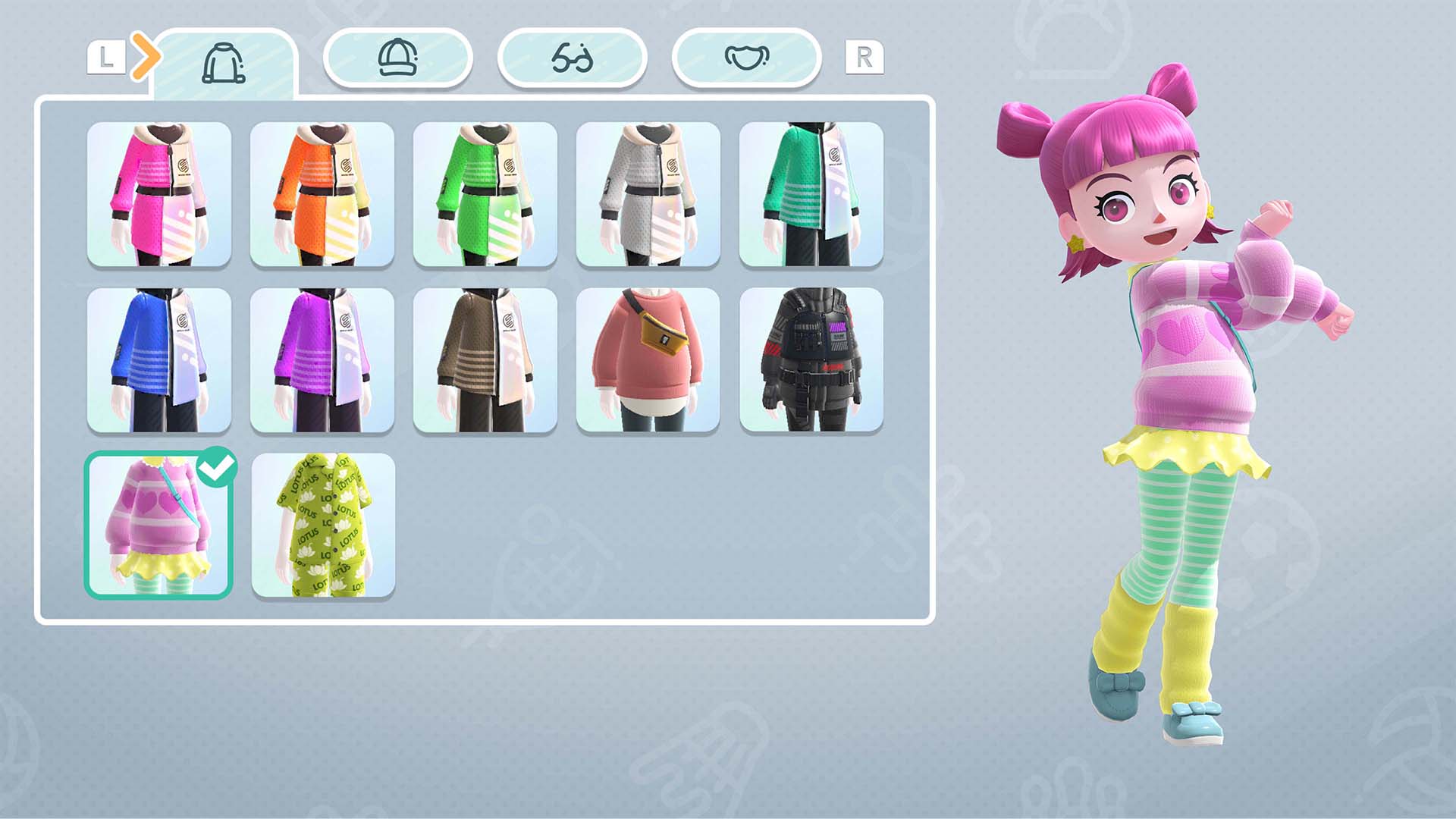 Likewise, when you score a goal in football you can swing the Joy-Cons to slide on your knees, and there are even minute details like during split-screen play, arrows will show you which way you’re supposed to be shooting, and they’re even colour-coded to your kit. It’s just a lovely time, with everything thought of.

Really, as long as you’re planning to play Nintendo Switch Sports online or with friends, you’re going to have a great time. I can’t stress enough how wonderful it was to have my now teenage children in the same room for hours on end playing something together. Yes, it’s on the lighter side as a package, and yes, there could be more sports ready to play right at launch, but I’m entirely confident that what’s here right now is a fantastic, fun time, and that if you enjoyed the Sports games that Nintendo has put out before, you’ll enjoy this too.

Nintendo Switch Sports is all about multiplayer action. With more to come in the future, it truly is excellent to have Sports back for the latest generation of Nintendo console.