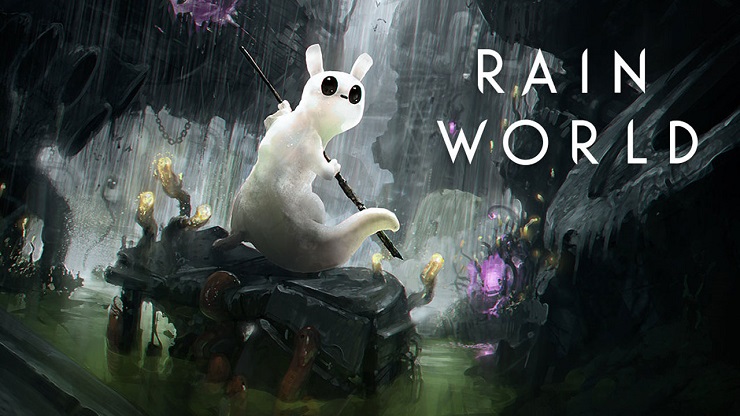 When Rain World’s opening cinematic begins, with eerie, hypnotic music and lovely art depicting the struggle of being an adorable Slugcat in a world where even the rain above is out to get you, it feels like the start of something special.

In fact, after seemingly endless hours trawling round the same few different areas with not a single jot of an idea about what I’m supposed to be doing, it began to vigorously peck my head.

The premise is that the cute Slugcat you are controlling has been separated from its family, and now you have to navigate a harsh and dangerous landscape in order to find them again. In this post apocalyptic hell hole you must catch and eat moths to keep up your energy up and then avoid everything else that breathes, or in some cases doesn’t breath, as they will kill you rather easily.

Rain World’s creepy and destroyed world looks fantastic with its 8 bit art style, and the way its lumbering creatures pop on the screen due to brighter neon colours and a slicker design really help them make an impact upon arrival. But the pretty art, the lack of a striking sound track, and a real lack of sound effects meant I didn’t really feel as oppressed as maybe I was supposed to be feeling.

I’m guessing the long stretches of quiet were meant to make me brim with dread, and then for when I hear a sound of a monster ambling towards me or the thunderous rain that will batter you if you’re caught out in it beginning to fall, it would get my heart racing. But sadly I was just left bored.

My favourite bits of Rain World are the tense moments when you enter a place in which a monster is currently scurrying about in. Having to avoid them by climbing, hiding in burrows and occasionally just legging it did get my pulse rising just a little bit. Seeing multiples monsters coming together and getting in a scrap was also pretty cool, too.

But there any favourable thoughts I have on Rain World come to an end. Aside from not having a single clue what I’m supposed to be doing or where I’m meant to be going, the platforming in Rain World just isn’t fun. The Slugcat, funnily enough, feels like a slug. Slow and heavy. A lot of the actual platforming revolves around climbing poles and then jumping to other bits of scaffolding, and the rest of the traversal is done by going through pipes.

The problem with the lack of fast movement, the Slugcat having a bit of pace, maybe being able to double jump or jump off walls, is that I felt at a complete disadvantage to any of my foes. The big slime lizards that are knocking about only have to bite me once and then I’m dead, starting back at the beginning, and I have no great evasive action I can take. You can throw objects, but they are few and far between and don’t seem to have that much of an effect.

But really I just have no idea what Rain World is. There’s nothing for me to get invested in, and I just found myself constantly wandering around the same areas completely unaware of what to do. I’d venture out into the world, explore as much as I could, desperately trying to find a pipe that would lead me to somewhere new, or just something. But eventually I’d wind up as lizard food or a scary plant would grab me by the leg and drag me to the depths.

I don’t know if I’m missing something massive, maybe even something very obvious, but to me Rain World doesn’t really feel like much of a game at all.

Sadly, despite its pretty aesthetic, Rain World is a confusing and sluggish platformer that failed to give me any reason for what I was doing and just left me feeling bored and bewildered.