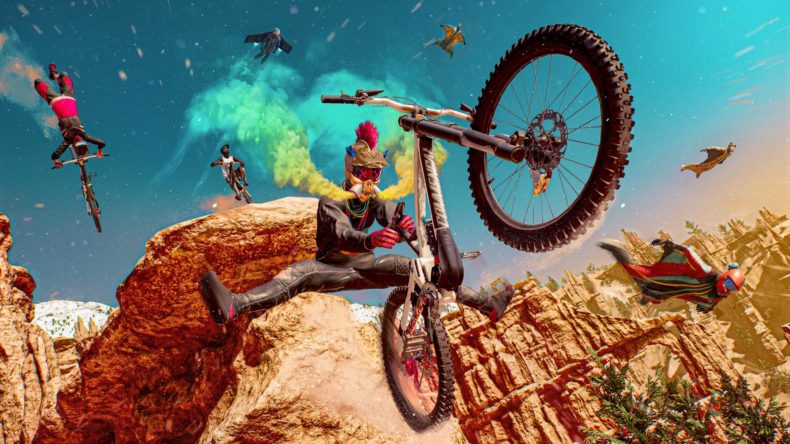 Riders Republic is a weird one. It’s at the same time one of the best and one of the worst games I’ve played this year. As an extreme sports sandbox it marries the best parts of Steep and The Crew 2 to produce a truly stellar experience (with a few niggles, which we’ll come to). However, it has some of the most tooth-shatteringly cringeworthy dialogue I’ve ever heard. It’s so bad, in fact, that it threatened to derail the entire review. After just half an hour of listening to people say “shred”, “steeze”, and “rad” in horribly forced dude-bro accents I was ready to quit.

It’s not just that it’s cheesy, though; it’s actually obnoxious. The few characters they are must have been designed as characateurs. I can’t allow myself to believe that Ubisoft Annecy think that people actually talk like this. Or worse, that there are people who really do talk like this and I’ve yet to meet them. Because that distant, undisclosed meeting time fills me with dread. And a little rage. 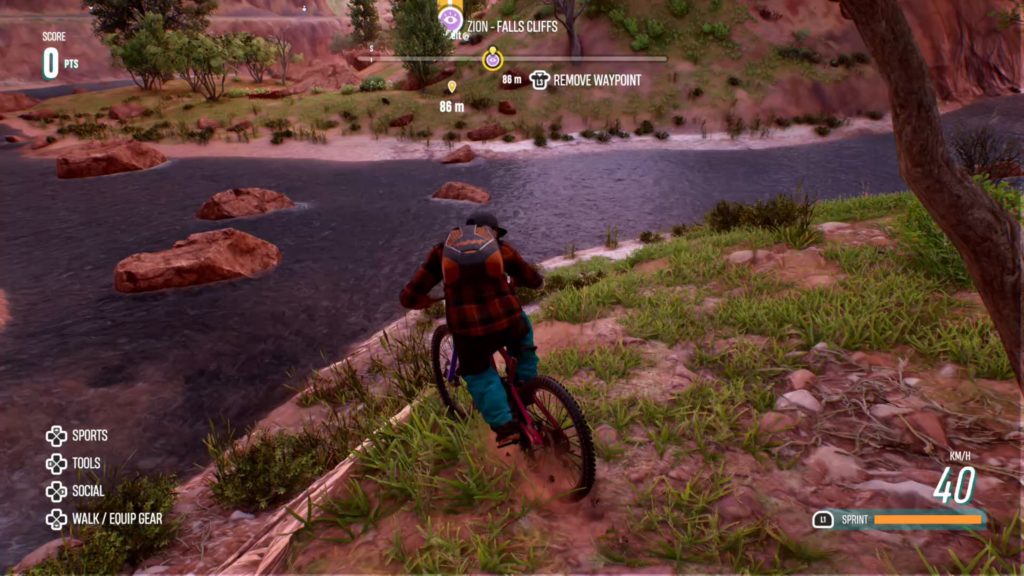 Thankfully, I pushed on. Because the more you play, the more time passes between Brett’s little monologues. Brett is the (for want of a better term) heart of Riders Republic. A former champion, this “bona-fide ledge” has retired from extreme sports to dispense burgers and wisdom at Rider’s Ridge, the non-stop party zone that also acts as the game’s hub.

Once you’re past the eye-twitching anger, the game you’re presented with is pretty fantastic. The Ubisoft formula is by now so well-known and familiar that it’s gone past boring and into the realms of comfort. It’s almost homely at this point. And Riders Republic presents a patented Ubisoft Open World (TM) with the self-assured swagger of Michael Bay releasing an action vehicle for whichever actor/comedian is hot right now. They know we’ll bitch, they know we’ll bite, and they won’t care how much we do of either as long as we do it.

As a result, Riders Republic is almost devoid of surprises, and yet what’s here is exactly what I wanted it to be in terms of content and variety. See, Riders Ridge is like a nature preservation but for extreme sports fanatics. The entire park is a playground, filled with events to compete in and pre-made runs to (sorry) shred. 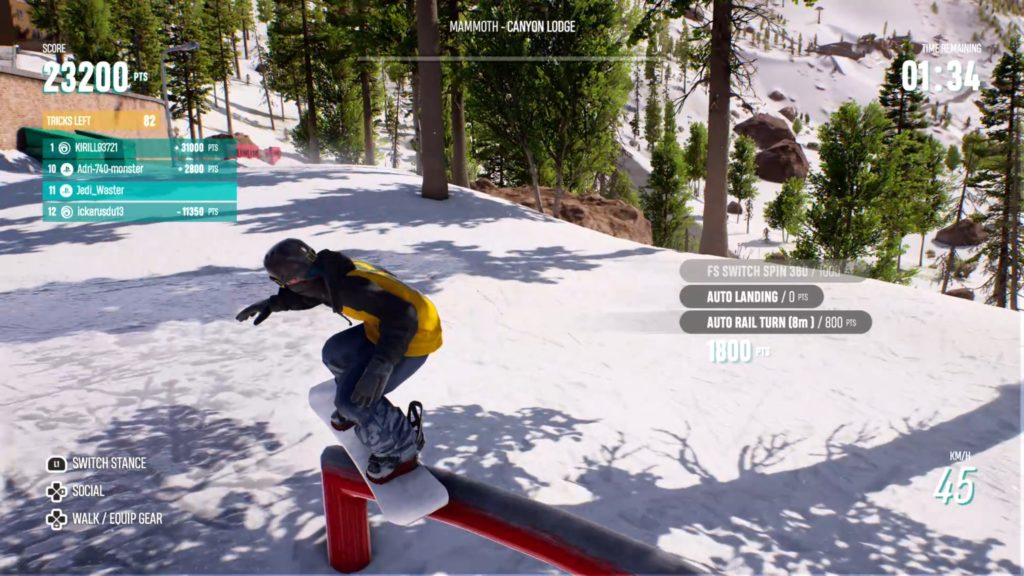 Your job here is simply to take part and have fun. It’s that simple. Competing in any event earns you a star, with bonus stars added for specific side objectives. Events are split between races, time trials, trick competitions and multi-part contests. From racer bikes to mountain bikes, skis, snowboards, wingsuits, and actual rocket packs, there’s a decent variety of gear, events and prizes.

You can opt to travel around the enormous map by any of these mediums, or you can use the plentiful fast-travel points to jump to spots within a few hundred metres of a given event. Alternatively you can earn or buy helicopter tickets so you can be dropped right at the starting line. Some events call for precision and speed, others want you to earn as many points as possible pulling tricks and stunts. One of the most exhilarating events is the wingsuit, which earns you points for near misses and flying in dangerous proximity to floors and canyon walls.

The sandbox is pretty stunning, featuring everything from winding cliffside roads to snowy peaks, arid canyons to waterfalls, lakes, snaking rivers and dry, rocky hillsides. Weather runs the full gamut from baking sunshine to full-on rainstorms. You can even spot wildlife, from eagles to wolves and grizzlies as you explore. Some areas are designated landmarks which you can find and catalogue in true Ubisoft fashion. There are collectibles, and hidden rare gear to discover. 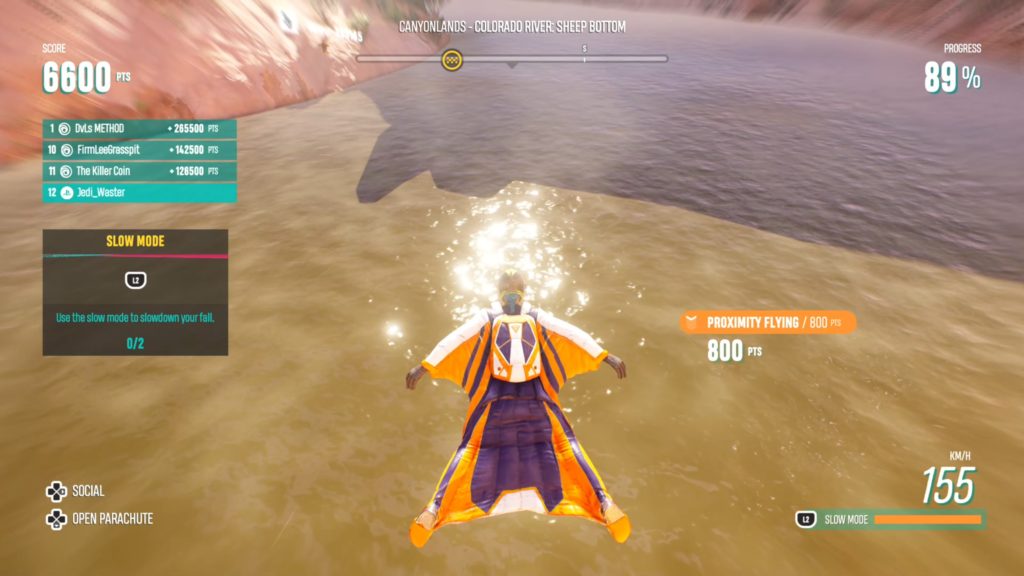 At any time the world is populated by thousands of players, thanks to crossplay. You’ll pass by them as you travel, see them pulling stunts or engaging in free events. The events themselves appear to be instanced, although you’ll see AI riders cutting across your path or racing the same trails. It makes the world feel populated and, frankly, is nothing short of wizardry. What the painful dialogue takes away, the technical proficiency here giveth back. And then some.

It’s not all gravy, of course. You can easily veer off-course, or get stuck in the scenery. Luckily you can squeeze R1 (on PS5) to rewind time and get you out of a jamb. In events you can do the same (and will have to if you wipe out), but this costs you valuable seconds. Any fumble during an event can be costly, but sometimes it’s unavoidable and besides, it’s the best way to learn.

Roughly every hour you’ll get the call to take part in a Mass Race, which pitches 64 players against one another in a multi-round, multi-event free-for-all. I have yet to come above the halfway point on the leaderboard, and yet they’re incredibly fun. They’re hardly technical, and are often beaten by someone with 1000+ stars to their name, but that’s not the point. 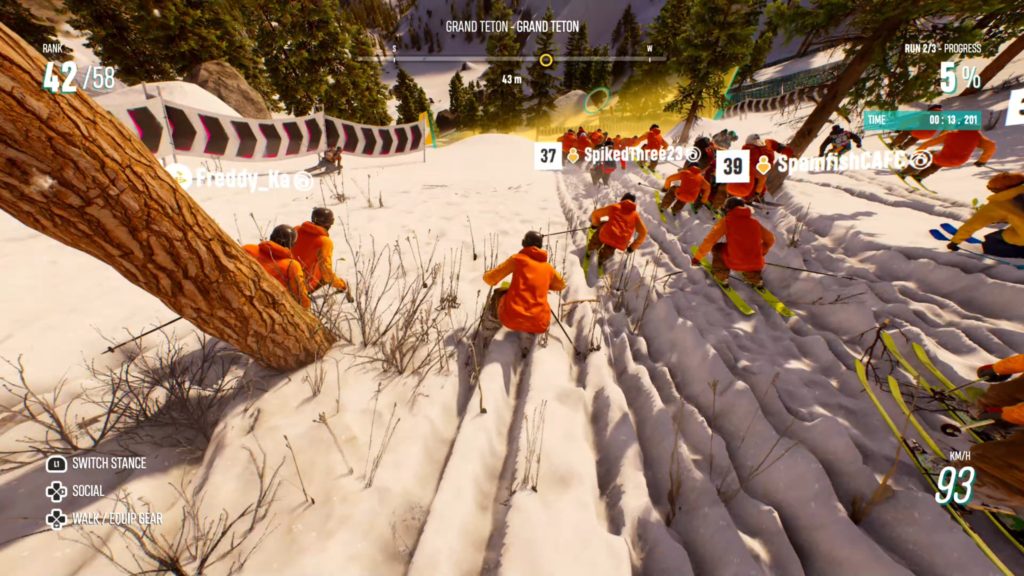 Levelling up has perks beyond the best gear, though. Raising your rank opens up new events, gear, and sponsors. You can have three sponsors on the go at once, and they all offer unique gear and rewards for ranking up within them. They present you with three side objectives at a time, and are just another thing to chase. Ubisoft truly understand the grind, which makes it even more annoying that so much of the in-game clothing is locked behind premium currency. There’s plenty to buy and earn, but a lot of the cooler stuff will cost real dollar, and that’s a shame.

In Riders Ridge you can take part in multiplayer trick battles to control territory by being the baddest, or you can spend time in the academy learning how to trick in the first place. I’d recommend doing this, too. One of those caveats I mentioned is that Riders Republic’s trick system needs a little work. It’s easy to pull of a backflip or spin, but the more complex manoeuvrers require the use of triggers (which also accelerate and decelerate, by the way) and more button presses. Riders Republic also doesn’t like to waste too much time actually teaching you to do them.

Instead you’ll need to learn by doing, which is massively frustrating as the controls differ quite wildly across each discipline. The problem is that they don’t feel as intuitive as something like, say, Tony Hawks. Or even Steep, really. Once you understand what you’re doing it feels better, but it takes a while to get there. You can adjust the button preferences and even decide if you want the game to manually land your tricks for you, but I felt this took away from the fun in the long run. It’s a tricky one. 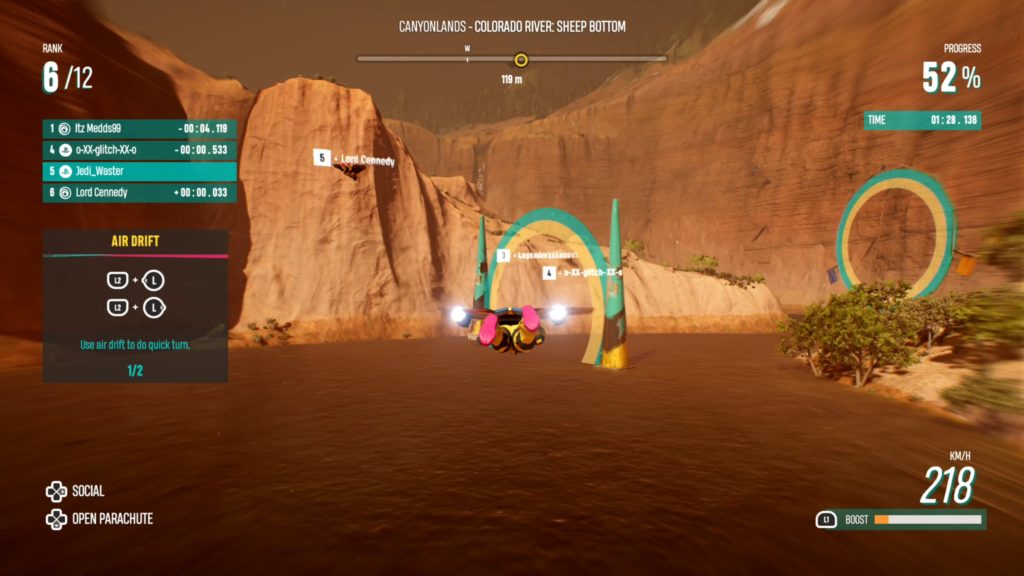 If you’re feeling brave, you can alter the PoV to first person. Particularly on the downhill bike races and rocketwing events, this is exceptionally fun, each one providing a cathartic thrill I don’t think I’ve experienced in many other extreme sports games.

Riders Republic gets so much right that it makes the stuff it gets wrong feel particularly egregious. A little more care and attention to the trick system would go along way. And Brett could just be cut out altogether and replaced with a Burnout Paradise style voice over for the events. You could even keep the Ridge TV framework and celebrity shredders like the Shackdaddy Bandits. Just remove all the other bullshit.

Regardless, if you can get past all the posturing and over-the-top woo-hooing, this is a very good extreme sports game. There’s a ton of content, loads of events, a massive world, a trick system that does eventually reward practice and patience, and a kick-ass soundtrack. It just needs to stop trying to be so cool and just, y’know, be cool.

If you can get past all the posturing and over-the-top woo-hooing, Riders Republic is a very good extreme sports game.