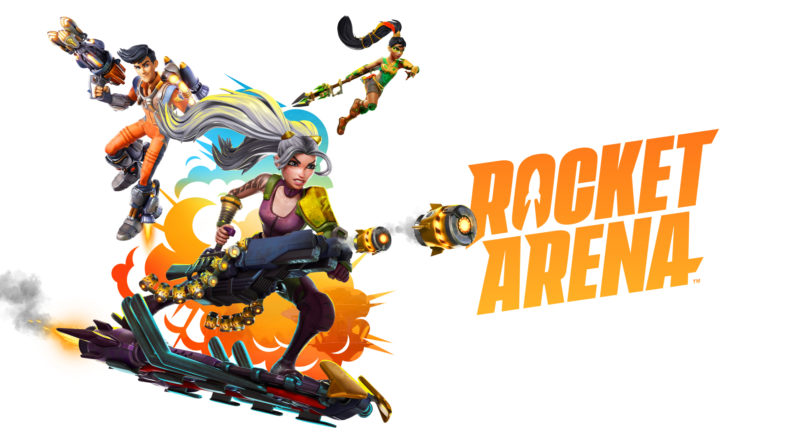 The competitive team shooter market is not an easy one to break into. Just look at games like Lawbreakers and Gigantic that struggled to find and keep an audience. In an arena dominated by colossi like Fortnite, Call of Duty, Rainbow Six: Siege, Overwatch and Apex Legends, you need to do something incredibly unique or incredibly unexpected to succeed. Rocket Arena, the new title from Final Strike Games and EA, attempts to do this with some success – though, notably, not with total success.

It’s a 3v3 team shooter where rockets are the order of the day. Every one of the 10 selectable characters has a rocket launcher (or variation thereof), and most of the one-use pick-ups are also explosives. Firing rockets at your feet will launch you into the air, and you have a triple jump to help you move around. Some fighters like classic gentleman Topnotch have rocket packs to keep them in the air for long periods of time. Sadly, not every one does, so if you’re expecting to be riding rockets as well as firing them you’ll be disappointed. I was. 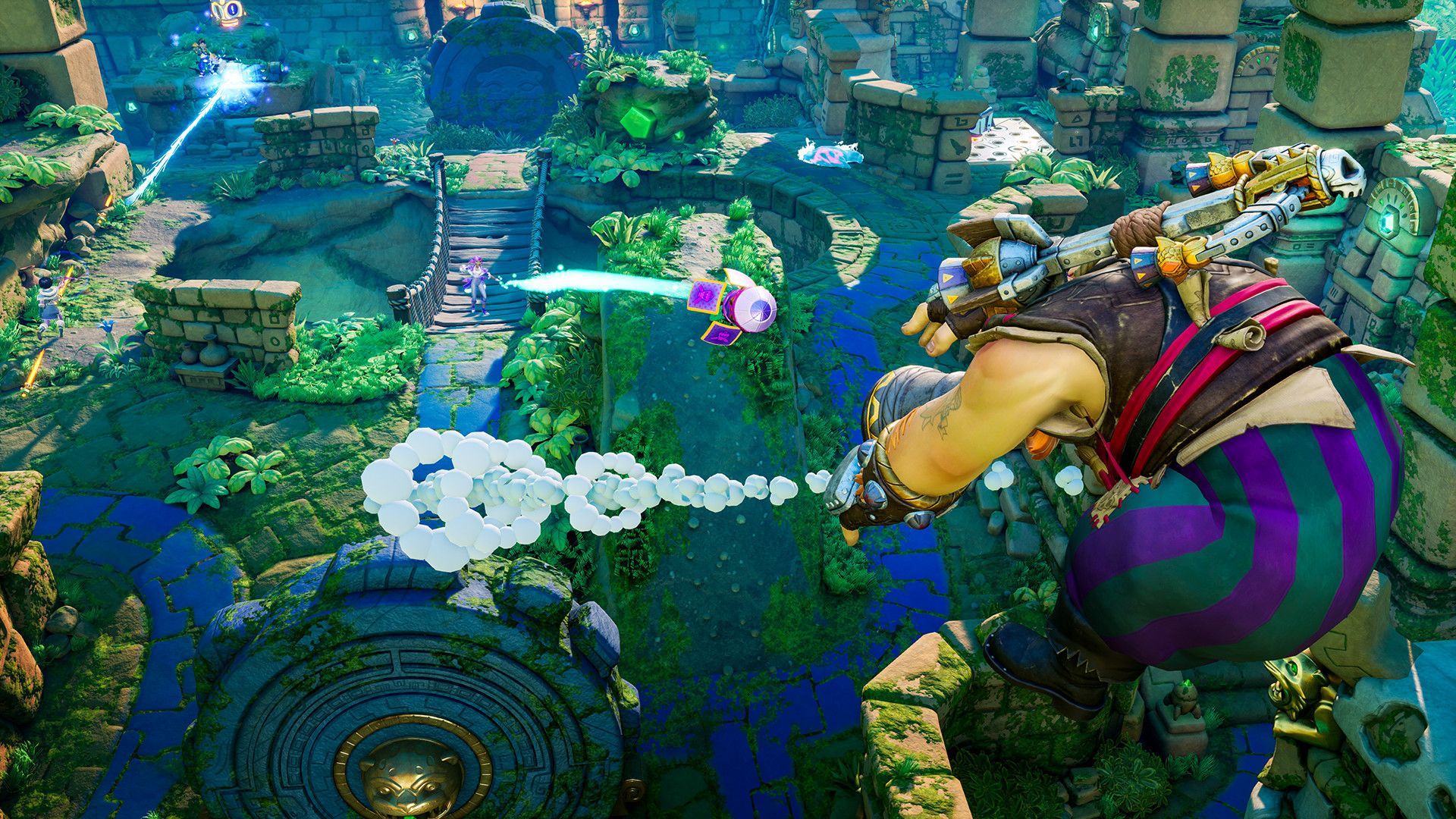 The primary mode is Knockout, where you simply attempt to blast your opponents out of the small, compact arena. There’s no health bar, and instead dealing damage builds your opponent’s “Blast Meter”. When it’s full and flashing, one more hit will catapult them out of the arena, Smash Bros style. Various pick-ups like bombs, mines, and speed boosts can give you an edge, but really the only way to succeed is to master your chosen character and learn how to use the dodge button effectively.

Each fighter feels very different. They move and fire at different speeds, reload at different rates and carry differing amounts of ammunition in a magazine. They all have unique abilities too. Phantasma, for example, can temporarily split into two and switch between both bodies; Izell can launch herself across the arena, and Boone can use his rocket launcher like a sniper rifle. Understanding the weight and heft of each character’s weapon is essential, as it’s incredibly hard to land a direct hit on moving opponent’s in Rocket Arena.

You need to lead targets, rely on the comparatively small areas of splash damage, and learn the cooldowns of your abilities and dodge. At the moment, some characters feel a little imbalanced. For example, Boone and Izell seem to fire quicker and truer, making it easier to hit players, whereas I simply couldn’t damage anyone as Phantasma or Amphora. I also found that some of the arenas are so tight and dense that the combat was confined to the outer edges where you can actually move, rendering a lot of the map kind of superfluous. 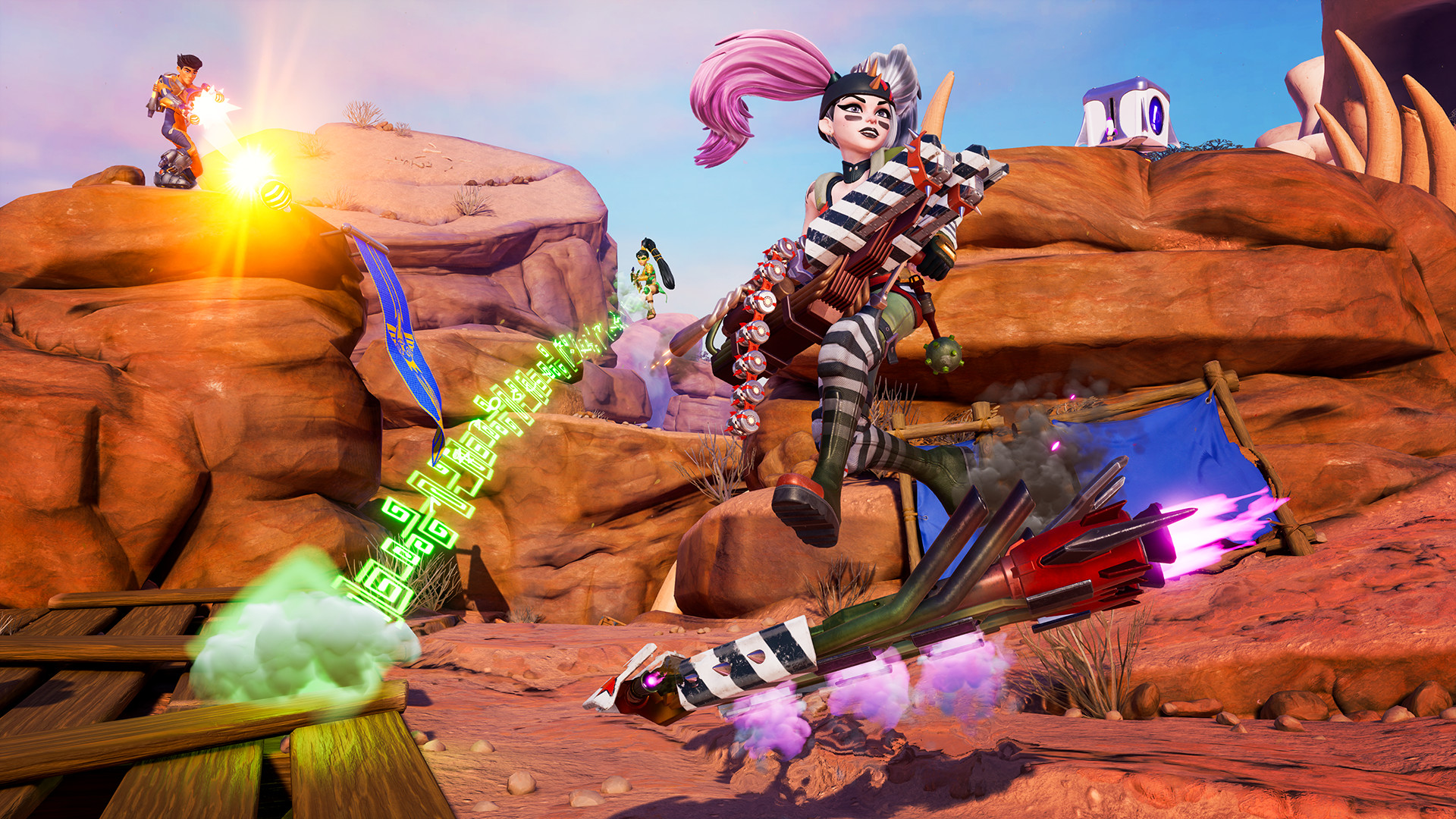 This may well be down to my lack of skill and inexperience with the game, but I also have major reservations about the feedback. It’s hard to tell if you’ve landed a hit, and often I’d be all but Megablasted out of the arena before I knew where I was being hit from. Some of the special abilities feel a little overpowered, and there’s just not enough speed. Characters move just a mite too slowly (likely to ensure you can hit people at all), and I didn’t feel the raw power that launching rockets ought to evoke.

As for the various additional game modes, well, I found it hard to even get matches in them. People seem to play Knockout a lot more than the randomly selected alternate modes. Games like Rocketball just felt one-sided if you’ve got a team who knows what they’re doing, and again there’s just not enough speed and power to make these contests feel unmissable. My favourite mode was probably Treasure Hunt, which is kind of like a King of the Hill mode whereby you need to find and defend a treasure chest that will earn you points the longer you’re in possession.

These alternate modes are a nice addition, but they really highlight how one-note the actual gameplay is. You can’t really vary your tactics an awful lot when your primary weapon is always a slow-ass rocket launcher.

Artefacts allow for small buffs to things like reload speed and cooldowns, and you can equip up to three once you’ve unlocked a few. Elsewhere Megablast trails, return trails, and cosmetics such as outfits and player totems can be purchased with Rocket Fuel, which itself costs real cash. The in-game currency appears to be insultingly useless, as I was sitting at around 80,000 after a few matches with nothing to spend it on. That said, you can unlock cosmetics by levelling up your fighters individually.

Ultimately, while it is fun in small doses, Rocket Arena feels itself like an alternate mode in a larger game. Were this a side concern in something like Fortnite, I’d be all in, but as a standalone experience it feels a little too limited and imbalanced to lead the pack.

Feels a little heavy and slow
A bit one-note

Ultimately, while it is fun in small doses, Rocket Arena feels itself like an alternate mode in a larger game. It's bright and colourful but as a standalone experience it feels a little too limited and imbalanced to lead the pack