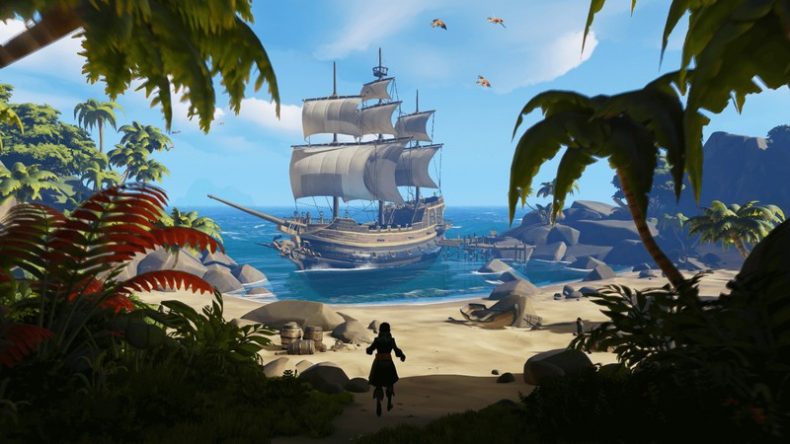 I’ve been spending a fair amount of time on the high seas of Rare’s Sea of Thieves since the launch date a few day ago, but I am not ready yet to put my thoughts into a full scored review. This is in part because if I am entirely honest with myself, I just can’t quite put my finger on what I like about the game.

I do like Sea of Thieves, a lot. It feels like a game that is bursting with potential and like one of the random crew I found myself playing with on a four-man galleon said “It’s the most exciting prospect of a game I’ve played in years!” But is the prospect of what Sea of Thieves could be enough at the moment? It’s an interesting question. First things first, Sea of Thieves is a pure sandbox. There are some roughly guided activities for you to do which are achieved by performing tasks for one of the three different factions that are currently available. Gold Hoarders will give you a map with an X marking the spot of a treasure and you will have to navigate to the island in question and observe the topography of the island to dig up the treasure, the Order of the Souls will see you travelling to an island and battling a special skeleton and collecting its cursed skull, and finally, Merchant Alliance which sees you performing tasks that mostly involve capturing and shipping animals to various locations. After each successful voyage you are rewarded with commendations that boost up your standing with that faction leading to more complex and lucrative quests.

Each of these guided missions are basically fetch quests, there is however a sprinkling of intrigue with them. Order of the Souls provides you with a riddle, and the name of the skeleton you will need to defeat, but you have to work out which island you need to travel to. Similarly the Gold Hoarders quests just give you a map of an island which you will have to find on the navigation map and then plot a course to it.

The missions are interesting enough, but I fear that if people are just approaching the game in this guided way then it really won’t appeal for long. Where I have had to most fun as been in the random events that happen. On my first ever voyage with a crew of my friends we set sail from port and within a few minutes were being attacked by the Kraken. We were ill-prepared having not even worked out how to load and fire cannons and seeing my friends eaten by one of the tentacles was a real laugh out loud moment. Later we discovered that you can be fired out of the cannon so our next adventure involved trying to track down other boats onto which I tried launching my friend directly onto their deck with disastrous results. Later we got blind drunk on a beach and spent five minutes hurling into buckets and trying to throw it over another crew member who was away from his controller temporarily. Sea of Thieves is full of these little moments of hilarity, and they are entirely created by the people you choose to play it with, and therein lies the problem I think for most people. Playing with friends is an absolute blast, but playing on your own is an entirely different experience – a far more contemplative one. I have spent a good few hours just sailing and looking at the beautiful world Rare has created. The sea is astonishing. On a clear evening with the moon in the sky, the reflection on the waves is gorgeous, and then at daybreak as the sun lifts over the horizon, the light on the water changes again to give depth and life to the waves hitting your boat. On the water, Sea of Thieves feels alive. Everywhere you look there is tonnes of tiny little details that all come together to create something really quite incredible, and if you take your time to look around it is easy to become immersed in this idea of a salty old sea dog, wed to the big blue.

I need to spend some more time with the game to really formulate my thoughts on it. I will say though, that if Rare has a roadmap for this game to increase content and gradually over time add in new things for players to do, then Sea of Thieves could well be something special. At present it feels bursting with potential, but something is holding it back a little. The world itself is incredibly good, and the moments that players create for themselves have the potential to really elevate the experience, I am just a little unsure about how much the guided stuff will keep players entertained at present.