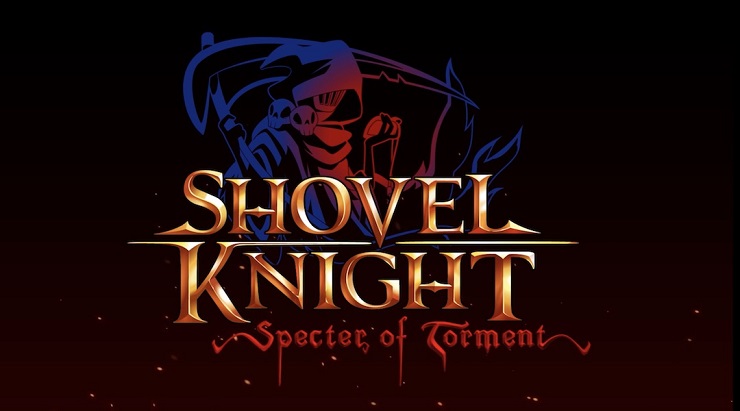 Shovel Knight burst into our lives in June 2014, giving Wii U owners a sense of modernised nostalgia with it echoing classic NES platforming giants like Megaman and Duck Tales. Now with Nintendo’s Switch launching it made sense for Yacht Club Games to bring a new slice of Shovel Knight to Ninty’s machine with the prequel Spectre of Torment.

Here we’re treated to the story of how Spectre Knight brought the Order of Knights over to the side of The Enchantress. You’ll choose levels from a Megaman-esque selection via the Dark Portal and battle through to each area’s chosen Knight guardian, knocking seven shades out of them to have them join your ranks. This is done through the main hub of the Tower of Fate where you can exchange money and skulls for an assortment of skills (bestowed upon you by Curios) and armour upgrades. As you take down the bosses they’ll join you in the main hub granting access to other areas within which you’ll find extra pick-ups to aid you. Spectre Knight himself is a bit of a slow walker and doesn’t really have a nimble jump (it’ll only barely clear the majority of enemies), he can, however, clamber on walls and dash attack when in the air. While this is fiddly to begin with you’ll soon be chaining wall jumps with ease to get up to some of the high points or save yourself from death by hole. The mid-air dash attack is especially handy, as all enemies and much of the scenery can be ‘attacked’ to launch Spectre Knight across the screen like an unladen swallow. You’ll need to watch how you approach them though, as the wrong angle can send you plummeting to your doom rather than sailing gracefully to the next chain point or moderate safety of a ladder.

This dash attack is invaluable for getting around, but it’s all too easy to fall back on in combat; the majority of tougher enemies can be disposed of with relative ease using it, as a successful attack on something that doesn’t die will see Spectre launched back up into the air so he can perform the attack again and again and again. Repeat use of this can see even the hardest of enemies fall with merely a flesh wound; in fact many of the bosses I was able to ignore attack patterns completely and just use airborne assaults for the entire duration, add in the curio for healing and this becomes even easier. In games like this though the bosses come second to level design and here Yacht Club Games’ work is exemplary. Every level is constructed to eke out every ounce of your ability just to get through to the next check point; they’re filled with secret nooks and crannies to find extra cash and secret rooms to test your climbing and dashing proficiency to claim extra spoils with which to upgrade with. While each level is doable with the basic abilities, you’ll certainly find some of the levels considerably easier if you venture elsewhere to improve yourself before taking them on.

If Shovel Knight reignited your love for 8-bit platforming, then Spectre of Torment is worthy of your time. It’s challenging without being unfair and even if you’re new to this sort of thing you don’t have to go and play the prior content first before taking this on; you might even find that this will give you reason to go back and play the rest afterwards. In pure 8-bit fashion the sprites pop with detail and the excellent chiptune music will have you tapping your feet as you drop to your doom again and again. Failure should always feel this good.

More of what Shovel Knight fans love, and a superb entry point for people new to the series, Spectre of Torment is a great take on modernised nostalgia.