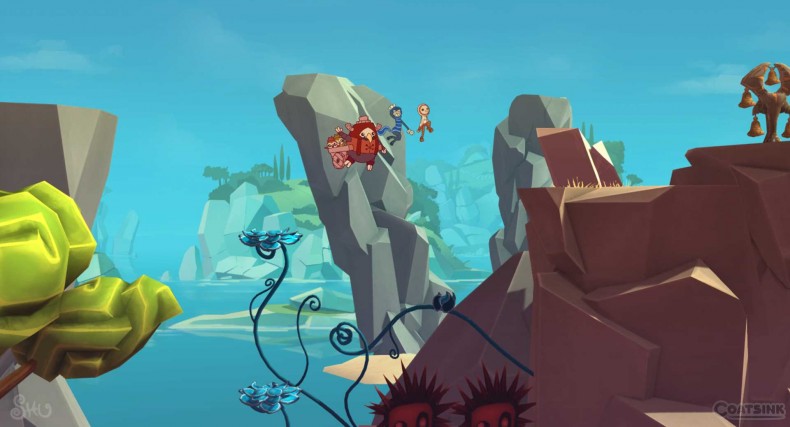 It’s been a while since I played a proper platform game. No overly invasive story elements, no cinematic cut-scenes or violence, just simple platforming and trinket collecting. This is Shu in a nutshell, really.

You take on the titular role of Shu, a young bird person who must help save his/her people (gender isn’t a noticeable thing here) from a terrible, evil storm. You do this by climbing a mountain filled with various dangers, and a rather large number of collectibles. These collectibles come in the form of glowing butterflies, mural pieces and “babbies”, six baby bird-people to be rescued within each level.

The story is as barebones as that one sentence I wrote above, with a brief, semi-animated intro (without dialogue, I should add) to outline the threat of the storm. This threat chases you a few times during each of Shu’s five worlds, with an ominous “RUN” appearing on screen before the menacing mass of darkness and teeth emerges, taking up the entire left side of the screen as it moves inexorably towards you. But I’ve gotten ahead of myself, haven’t I? The game isn’t just about those frantic chases, in fact it’s mostly an incredibly relaxing and fun platformer. It’s a beautifully simple mixture of running, jumping and gliding in a 2.5D world, not entirely unlike the Donkey Kong Country series. Or even the newer Rayman games. It’s almost a mix of the two, actually. There are also several characters to meet during each world, and they all bring their own powers and abilities to the table, as long as they remain by Shu’s side. One allows you to run on water, another controls lifts (elevators, for our American friends), and even wall-jumping and double jumping are abilities given by these feathered friends. They won’t stick around forever, mind, and this offers a slightly different, more finite, take on abilities and makes for an interesting and varied experience.

It’s a lovely to sight to behold, too. Every texture is stunningly detailed in a handpainted style, creating a vibrant and varied world. Each level is designed to funnel the player through from A to B, but leaves just enough room to explore contained deviations from the path to find secrets. This does come a little undone during the chase sections though, as there’s often just about enough time to take the recommended route, so trying to find the secrets is almost impossible if you make even the slightest mistake. This would be fine if the mistakes were always your own, but the normally stellar level design sometimes falls away during the chases, creating some bloody frustrating moments as you die numerous times. This will create problems mostly for those looking to find all the secrets and collectibles, or even the frankly ridiculous trophy for finishing every level without dying. Make no mistake, you will die. The camera plays a part in a few of those deaths as well, as it often feels a little too zoomed-in and when you’re forced to move at speed, that can obscure the next part of your route or worse, it can obscure those things that can kill you. Luckily the checkpoint and lives system is refreshingly forgiving, helping to remove some of the frustration from the chase sequences. You start each level with five lives, but every time you hit a checkpoint any lost lives will be restored to five. The only time I came close to losing all five lives was during the very last level, which was filled with overly long gaps between checkpoints and overly harsh design that often felt unfair – more so for anyone trying to collect everything! The good thing for those people? Every collectible you find within a particular run will be saved and stored away for the next run. This means that you can collect, let’s say, four babbies and 356/488 butterflies in a level, you will only have to find the other two babbies and the remaining 132 butterflies in the next run – or as many runs as it takes for you to find everything. It softens the blow, at least.

Another blow-softener is the music, which is wonderful throughout. It’s light and filled with soothing tones, suiting the natural setting of the game proper, and when the darkness looms and the storm begins sweeping away everything in its path as it chases Shu, the music changes to reflect this. It takes on a more sinister, frantic sound that adds to the stress of keeping you and your little bird friends alive. Combined with the handpainted visual style, the music breathes real life into the game’s colourful world.

With its wonderful, flowing gameplay, and its beautiful presentation, Shu is a sometimes great, sometimes frustrating experience. But when it gets it right, and it does most of the time, it does a great job of harking back to some classic platformers, while still retaining its own, more modern identity. It’s never going to challenge the likes of Nintendo for pure platforming joy, but it’s still one of the better challengers of recent years.

Chase sequences can be frustrating
Camera too zoomed-in at times

Shu is a great platformer inspired by some classic games, and although it never quite lives up to that inspiration, it still delivers a fun experience.