previous
The DioField Chronicle review
random
next
The Legend of Heroes: Trails from Zero review
0 likes 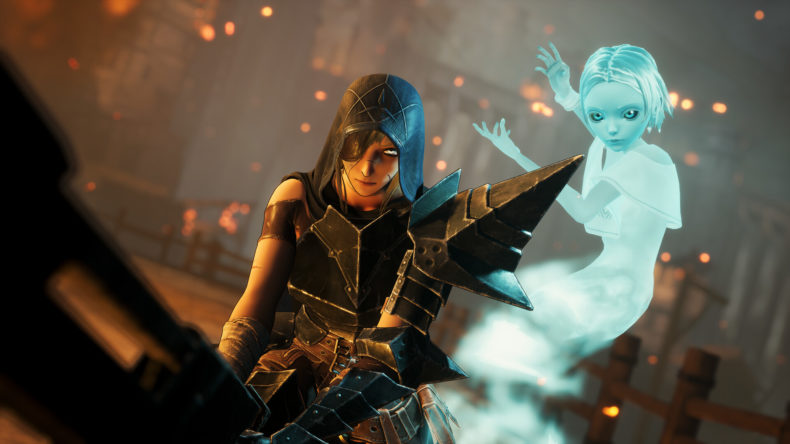 Contrary to what first appearances or even its own title might suggest, Soulstice from Reply Game Studios is not a Soulslike. It’s something altogether rarer than that: a linear, chapter-by-chapter adventure game the likes of which you just don’t often see anymore.

Before we roll out the trumpeters it’s worth remembering that games moved on from that particular genre for a lot of reasons. Soulstice‘s straightforward hack and slash action certainly has a measure of appeal, but I occasionally struggled to remain invested through its cavalcade of dusty rooms, grimy sewers and what I could swear was the same stretch of burning bridge over and over again.

You play the role of Briar, a rookie Ashen Knight who seeks the approval of her order. Ashen Knights are a special breed of warrior known as Chimeras, bound to a ghostly shade who enhances their power and provides field support. Briar’s shade is her sister, Lute, whose death was the catalyst for Briar’s standoffish way of life. 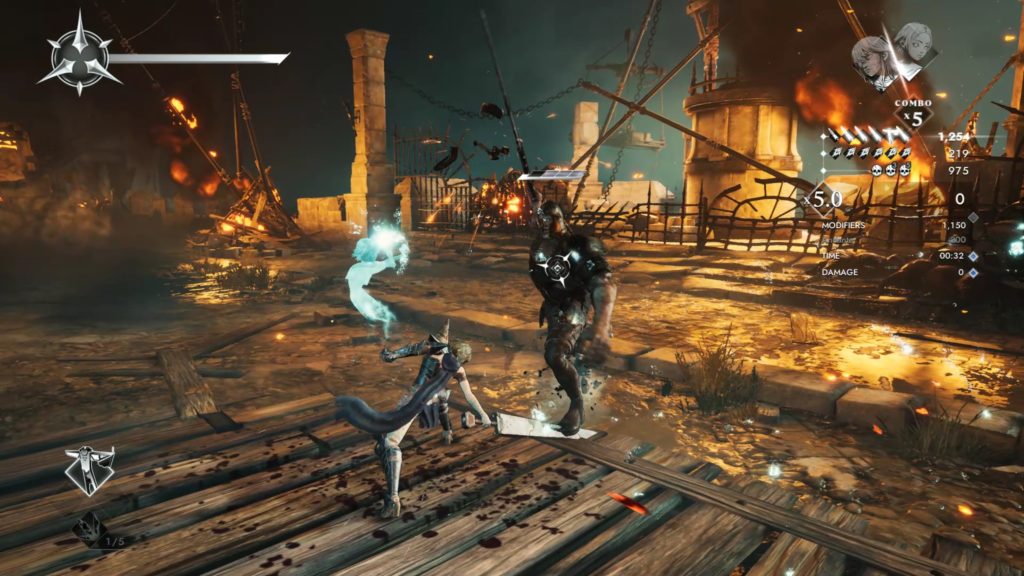 In combat, Lute is used to parry attacks and disrupt, slow, or confuse the enemy. You’re often outnumbered eight to one (or one and a half) and without Lute you’ll be pancaked in no time. Unless you have lightning reflexes combat is, bluntly, a bit of a mess. Enemies pile on from all angles, and the only indication of an incoming attack is a white icon that easily blends into all the other effects. If you want to unleash Briar’s most powerful attacks, including the visually-impressive Rapture attack, you’ll need to build Synergy between the protagonists by timing Lute’s parries and avoiding damage.

Pressing the left or right trigger causes Lute to create an aura of blue or red energy around the sisters. She can only hold it for a limited time before giving into Entropy and becoming unable to block or fight, but these auras highlight hidden shards used to level up, or secret platforms for navigation. Some enemies are also colour-coded, so you’ll be switching between states a lot during fights. Then factor in Briar’s multiple secondary weapons such as fists to break armour, and a bow for flying enemies, and the fact that you can juggle bad guys, and, well it’s a hell of a lot to keep track of. Soulstice’s combat is like a big tasty trifle, which can be good – sometimes we like trifle, but not when it’s been put through a tumble dryer, bowl and all

Even after six hours I was finding combat to be something of a chore. There’s so much to focus on, and it’s exacerbated during the few boss fights when you’re dealing with special mechanics on top of mobs of monstrous guards and possessed beasts. 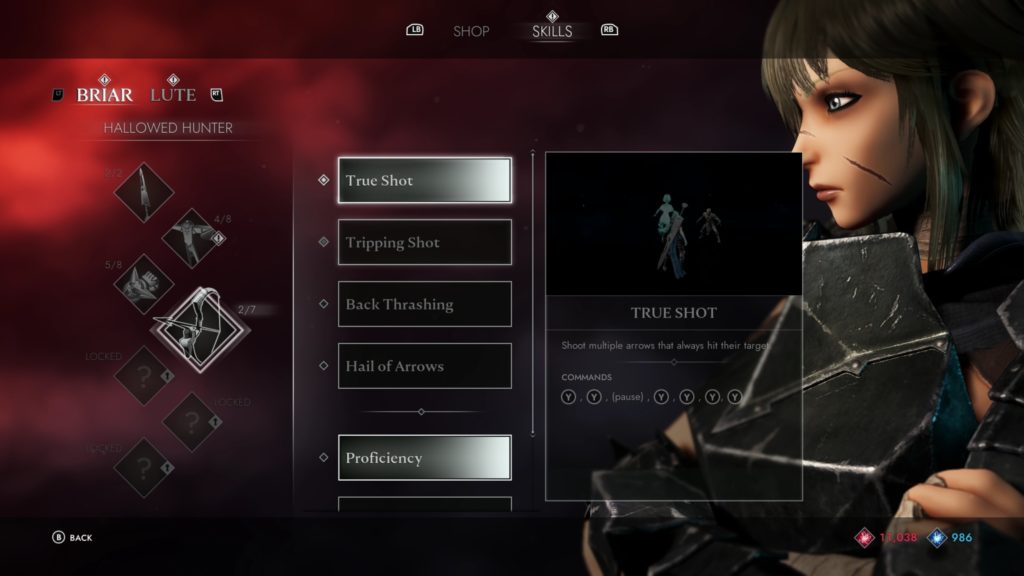 When not in combat you explore the ruined city and its various environs. Well, explore is a bit of a stretch, as Soulstice is incredibly linear. You’ll find occasional secrets hidden in nooks and crannies, but these are either crystal nodes, items that combine in threes to increase your health or Entropy, or challenge portals. These teleport you to a little pocket dimension where you’ll need to pass combat challenges to receive health or Entropy upgrades.

You can spend red and blue crystal shards to upgrade the sisters’ skills or purchase curatives and, essentially, extra lives at a disapproving NPC named Layton or between missions. Briar’s skill trees focus on weapon combos and proficiency boosts, while Lute’s are huge, sprawling and nothing short of confounding, offering dozens of tangents and branches to incrementally improve certain elements or add new effects to her various parries and Synergy attacks.

There were times during Soulstice where I wished it would take itself just a little less seriously. Briar fights through hordes of monsters in a get-up that’s two-thirds tank armour and one-third fetish outfit, with a sword several inches taller than she is and which certainly weighs more, a ghost girl clinging to her shoulder and boss enemies that posture and prattle with such a total lack of self-awareness that it borders on parody, yet it’s all presented with a weirdly po-faced earnestness. 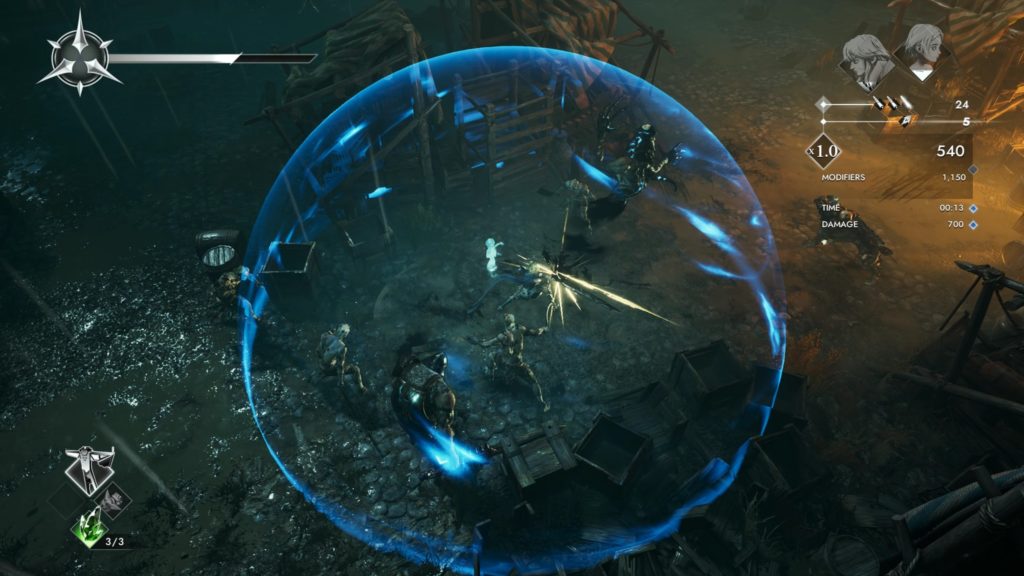 Sassy heroines might be an overdone staple in video games but at least that’s a personality. For all the threats and oaths Briar pushes through her clenched teeth, she’s just not very likeable. Lute balances it somewhat by injecting some child-like wonder and innocence into proceedings. Her desire to protect her sister from the growing, vaguely-defined Corruption inside her provides a strong enough backbone for the narrative that you’ll want to see it through, even if it is a bit too straight-laced for its own good.

Soulstice is a very dark game, aesthetically. The environments don’t change a lot from chapter to chapter, and you’re almost always in the shadows. It’s a good backdrop for the enemies and combat effects though, which are often bright and loud. Some of the combat animations are also cool, especially the Rapture attacks that see both sisters come together in a blazing purple glow before Briar goes ham on everything with pointy teeth in her immediate vicinity. But while Soulstice isn’t shy with its majestic vistas and zoomed-out camera angles, it doesn’t present anything we haven’t seen before.

Invisible walls that funnel you down a specific route, the score screen that flashes up after every single fight, and the use of red and blue crystals to level up your skills deliberately evoke games like Devil May Cry, but in doing so highlight how Soulstice pales a little in comparison to the powerhouses it emulates. There’s not enough nuance or levity in its combat or story, and it comes off as just a little also-ran.

Soulstice is a competent brawler with a solid core concept and an interesting world history that remains somewhat under-explored. It borrows ideas from multiple sources, including other character action games and even Japanese anime where the character design is concerned, but the execution is somewhat flat. Soulstice may not always dazzle, but if you’re looking for a decent adventure to kill 10 or 12 hours there are certainly worse options.

Soulstice is a competent hack and slasher with a solid core concept and an interesting world history that remains somewhat under-explored.