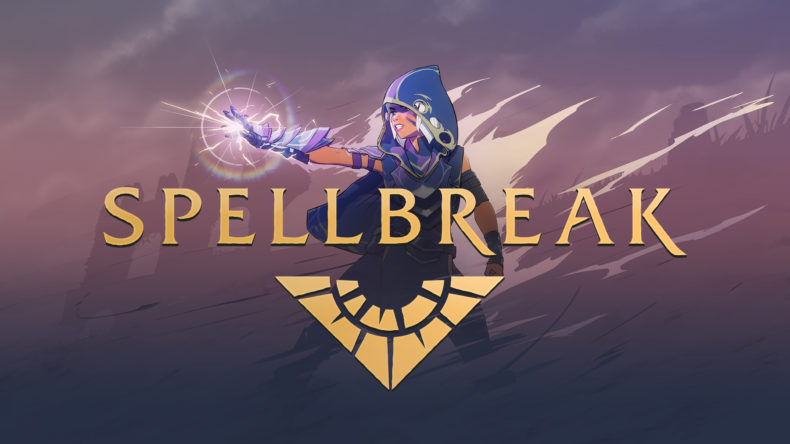 Battle Royale games and arena shooters tend to come and go a lot these days. Like an out of control carousel tossing its riders into a crowd that neither asked, nor needs, to be hit in the face repeatedly by the same old thing in different clothes, the genre is one of the starkest examples of the industry throwing enough mud at a wall that some of it is eventually going to stick. And sure, I didn’t need to use two metaphors for the same thing there, but I like them both and they do the same job, only slightly differently. Just like Battle Royales. Okay, I’ll stop with the clumsy metaphors now. What was I talking about? Ah, yes, Spellbreak, a new Battle Royale game that does the same as the others only different.

Actually, that’s not fair. Because not only does Spellbreak do a lot of things differently, it’s also one of the best Battle Royales I’ve played since ever. It has a few problems, mind. And while these are the sort of problems I’d usually say will be patched out in good time, Spellbreak has already been here in various forms, including alphas, betas and early access, for around 18 months. Thankfully, those problems – which we’ll get to – don’t impact the minute-to-minute gameplay very much at all – and the minute-to-minute gameplay in Spellbreak is exceptionally good.

You play as a Wizard, who… Actually I don’t think there’s a story. In a short opening cinematic someone calls you a “Vowbreaker”, but it doesn’t really explain anything. But then, calling Spellbreak’s story “bare-bones” would be like complaining there isn’t enough meat on a chicken nugget. It is what it is; if you want more for your money, buy a chicken sandwich. Spellbreak is free-to-play, and concessions have been made where the narrative is concerned. Regardless, what we know for sure is that you are definitely a Wizard, and you’re taking part in a contest (possibly training) against other Wizards. Calling it “Fortnite with magic” is reductive, but not wholly inaccurate. 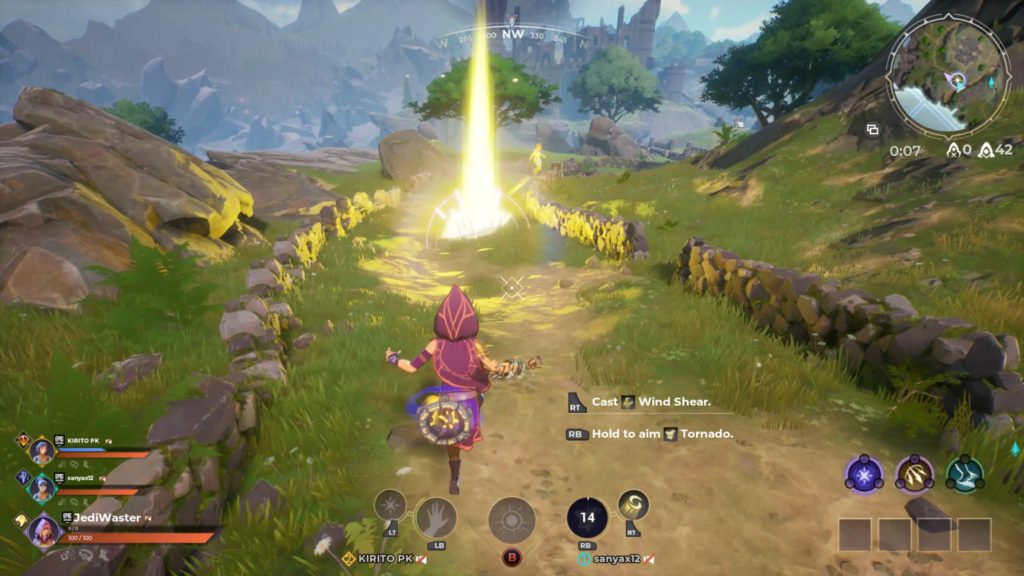 Instead of a battle bus, you airdrop from a sky portal into a large map as a member of one of 14 teams of three (totalling 42 players), and are tasked with simply being the last team standing. At the time of writing Solo mode and Duos mode are locked by devs Proletariat to ensure a smoother launch, so I can only report on my experience with teams, and I have to say I’m impressed. Because it’s a Battle Royale, there is a “storm circle” that shrinks throughout the match, right up until you’re all stuck in a teeny-tiny arena and the winner is usually the team that can fly.

At the start of each match, you select a Gauntlet, the element tied to which acts as your Class, and informs how you’ll level up in the match and which rewards you’ll accrue when your XP is tallied up in the post-game. Currently, there are 6 to choose from: Fire, Ice, Stone, Toxic, Lightning, and Wind. While you’ll equip one as your primary Gauntlet either on your right or left hand, you can find and equip any of the others on the other hand during a match. Each offers a very different play style, too – and they all upgrade steadily as you gain levels.

The Stone Gauntlet, for example, makes you a “Stoneshaper”, and allows you to hurl massive boulders at the enemy or create fissures in the ground that do instant damage. It also conveys a temporary shield buff that makes you harder to kill in a one-on-one duel. Wind conjures tornadoes, Fire launches a fast fireball or creates a huge wall of flames, and if you’re a “Frostborn” you can skate on your own icy puddles and slow the opposition. 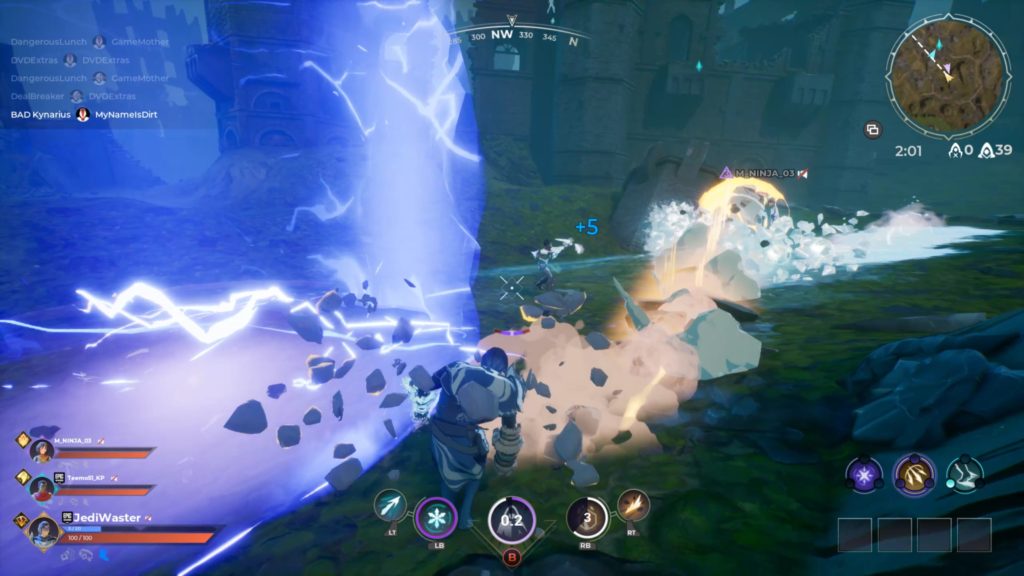 What makes this system so cool is the opportunity for Synergies. Spray ice on the floor and it will turn to water, which you can then electrify. Hit a firewall with a tornado and you’ll create a huge firestorm. You can explode a toxic cloud, mix wind and lightning, or electrify a firewall. Learning to coordinate with a team can make you a devastating trio, but if you learn how to synergise your own spells you’ll be a menace on the battlefield in no time.

Once in the match, your mage can equip various other items. Boots to improve your speed, Amulates to increase mana, and special abilities that convey all manner of useful boons like the ability to fly temporarily, a superhuman jump, invisibility, or a lupine howl that reveals the location of enemies in the vicinity. Health and shield potions can also be dropped into quick slots to save your life in a scrape. Colour-coded gear makes it easy to spot when an item will upgrade something you have, and there are so many chests and containers to find and break open that it’s easy to forget you’re supposed to be fighting for your life.

Death will reduce you to a glowing orb that can move and observe but not interact. If a teammate revives you within 60 seconds, you can return to the fray, otherwise it’s match over for you. If an enemy reaches you first, they can exile you right out of the match. 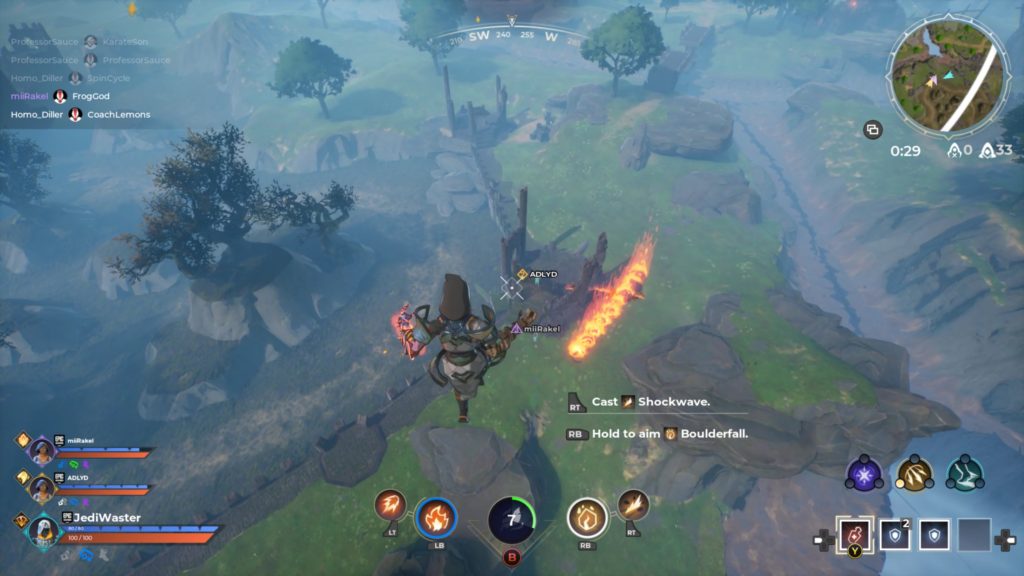 Dotted around the map are glowing spheres, at the centre of which is a node of power. Activating one of these will reveal a powerful chest containing epic or legendary gear, as well as magical scrolls. These scrolls upgrade your attributes for the duration of the match and are well worth finding if you can. If anything, though, Spellbreak’s map feels too big. Credit goes to the Proletariat for cramming it full of chests and goodies, but the 42 players per match simply can’t fill it, and you can spend a lot of time just looking for someone to fight.

It’s a nice map, though, as far as they go. Separate biomes make unlikely neighbours, but there’s a space on the map for all seasons, times of day and dispositions, whether you like a nice barren desert or a magic-blasted, tumbledown castle. The randomised location of the storm circle helps, too, of course. Moving around is made easier by the ability to fly a little, or glide (as well as the aforementioned abilities you can find), but this uses your mana quickly. Learning how to use your flight to evade attacks and get the drop on those below you is a viable tactic though.

I’ve been playing Spellbreak on PC mostly (and yes, there’s cross-play and cross-saves), where it runs smoothly most of the time, and I’ve experienced very few instances of latency. On Nintendo Switch it’s not quite as polished, with occasional frame drops, some crashes here and there, and a less stable connection in general. That said, the cartoony aesthetic lends itself well to the Switch, and little is noticeably lost when you’re actually playing that version.

Spellbreak does a lot of things right. It’s incredibly accessible, for a start, and newcomers will have fun getting to grips with each of the Gauntlets. I’d advise experimenting to begin with, not only with the primary Class but with the synergies as well. If anything, the progression lets it down. It takes a long time to gain levels and the rewards for doing so aren’t all that great. Add to this the fact that cosmetics are incredibly bland, and you start to wonder why the Proletariat couldn’t tie some of the cosmetics to progression, having your avatar change slightly when they equip a Gauntlet they’re highly attuned with, for example. I wouldn’t mind stony skin or flaming eyes, let’s put it that way.

These issues really don’t heavily impact the gameplay though, and I’m sure Spellbreak will be continuously patched and updated as we get further and further past launch. Right now it’s a very accessible, fast-paced, unique Battle Royale that innovates as much as it imitates, and it’s well worth jumping into on either platform.

Spellbreak is a unique, fast-paced Battle Royalke that takes a few risks which mostly pay off. It needs some work in fringe areas like cosmetics and levelling, but the gameplay is solid.