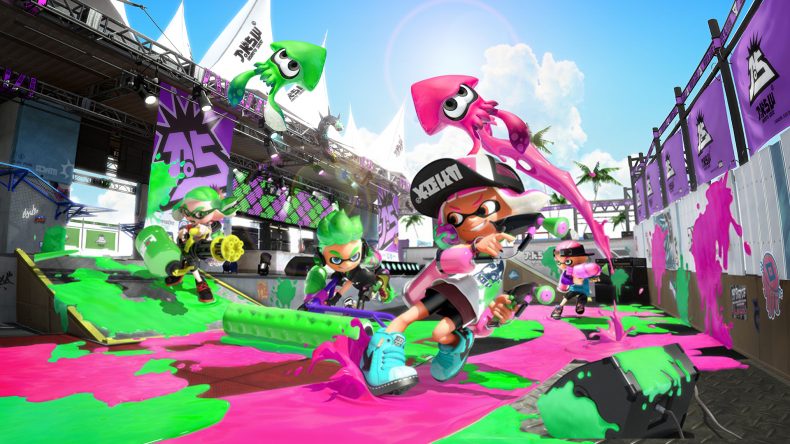 If you’re one of the people who never got to play Splatoon on Wii U (and let’s face it, there’s plenty in that boat) there’s a chance you’ll fall instantly in love and be blown away by Splatoon 2. This is, fundamentally, the original game tarted up, given a new coat of paint (ho ho ho) and sent out for round two. You’ll revel in the glorious ink-splattering fun, be in awe at the beautiful visuals and smooth framerate, and generally just think what a lovely time this all is. Safe for all, friendly, even in combat.

But if you’re back for more after loving the first game (hi!) then there are some disappointing things here, so let’s get those out of the way now. The daft two-map rotation is back, changing every two hours. This means you can only play two maps and you’ll regularly play the same map twice. It’s archaic and unnecessary. Where other games offer a map vote, or a larger rotation, Splatoon 2 charges forward in an almost pig-headed nature. Thankfully when the maps switch you don’t have to watch a cut-scene involving the Squid Sisters every time, and instead are given a quick info message letting you know it’s happening.

There are maps from the first game re-purposed here with additions from the hero mode (single player campaign). There are people that will call Splatoon 2 a remix, or a deluxe edition, or even a remake of the original title, and this kind of thing does nothing to protect, nor dispel that argument. Rather than sound like I’m moaning, I’ll finish up my laundry list of things that should have been fixed but haven’t quickly: you still can’t change weapons in a lobby, you still can’t exit a lobby you’ve entered, and there are too many currencies (all in-game) that don’t mesh with one another. Twists come in the form of new weapons and ways to get around. The reasonably lengthy single player mode offers ziplines (ink-lines? squid-lines?) that you can move on, and they show up on the maps for the multiplayer. Likewise sponges that expand as you ink them pop up, and in a game that’s about movement and being quick-witted, both of these are welcome additions that add yet more options for the terrific, face-paced combat, that sees you popping in and out of squid form, firing your weapon, throwing down your special, and generally painting the town pink, green, blue, purple, or whatever colour your team is this time around. The Duallies are fantastic fun, and are basically dual wielding ink-Uzis (they feel slightly overpowered online, but it’s too early to be sure). New specials mix things up, and there are enough minor additions and alterations that hardcore fans will notice and be happy about.

Many of the negatives fall away when you’re in the moment, because this is just a good time game. In-motion, Splatoon 2 is stunning, from the glistening slick coats of fresh paint to the design of the characters that ooze charm (and ink). There are few games that capture the imagination in a way the movement does here, and only comparisons I can make is to Titanfall 2. They’re very different games, but the satisfaction from covering the floor, squidding up a wall and leaping down to splat your enemy and paint more floor is definitely on par with the perpetual motion of the best shooter of 2016. In truth, the campaign is a little long in the tooth, but that’s not something I’m going to lambaste Nintendo for. Each of the five hub worlds contains small mini-objectives to do, and the levels themselves are meticulously designed – perhaps too much, because there are levels that have “Sheldon requests” which we need to talk about. Sheldon is the universe’s weaponsmith, and these request levels force you to use a specific weapon for “testing” purposes, and there are just too many of this type of level for my liking.

The trouble with that is that it might make you use a weapon you just don’t enjoy (for me: sniper rifle). Once completed you can revisit with any weapon, but that doesn’t mean you won’t dislike some of them first time around. You can upgrade your weapons and abilities with currency from hero mode, and while I won’t spoil any boss battles, I will say this: upgrade the weapon you start with. Seriously. If you don’t, you might come a cropper later on.

But the set pieces are magnificent, rarely resulting in frustration. While some levels will make you want to throw the controller, the checkpoints are very generous: the difficulty is almost randomised due to the way you are damaged by the ink, and therefore things change each time. Finding the collectibles hidden in the hubs and levels is a source of fun, feeling like superb obstacle courses which you need to conquer. Salmon Run (Horde Mode) is a terrific addition to the stable that would otherwise just be hero mode and multiplayer. It adds a new dimension to the core mechanics and is genuinely difficult. A coordinated team of friends is the best way to go about things, and it really does bring back those feelings from when you first played Gears of War’s Horde Mode. The stages shift as waves progress, meaning that one wave could be a tight affair with nowhere to run, while others have expanded levels thanks to the tide going out.

Ramping up the difficulty level as you progress, this is a rewarding mode that will make you better at the game. Grabbing the eggs and trying to progress as the gameplay gets more and more frantic, and boss enemies are thrown at you, this is just sublime. You’ll feel elation when you just about survive a round, and deflated when you get enough eggs to complete a wave, but lose because the onslaught of enemies is too much and you fall before surviving the time limit. The weapons change per wave meaning that if you start with the bucket for wave one, you will have a different weapon for wave two. Some will find this annoying because there are weapons they don’t enjoy, I quite like it in Salmon Run because it makes every round feel different and enforces tactical changes.

All of this is why gating Salmon Run off to certain time slots is a decision I just cannot understand. Likewise, keeping some multiplayer modes within Ranked Mode or League Match. I don’t know why Nintendo feel the need to tell people how and when they should play a game they love. With the ability to join friends, or use the app (I know, I know) to get together with friends, there seems no reason to do this, but that’s the way it is, unfortunately. I can’t give it a free ride for this. Imagine if Halo 6 brings back Firefight but only on a seemingly random timeslot. What if Gears of War 5 has Horde but only midnight to 5am on a Thursday.

Splatoon 2 leaves me feeling incredibly conflicted. On one hand I adored Splatoon and am overjoyed such a unique and welcoming game is getting another run out with a larger audience. On the other other hand, bosses, maps, and bad decisions are repeated here. There is so much to like about Splatoon 2. When it comes to the actual gameplay, I don’t think there are many experiences that touch it right now. It’s addictive and enjoyable. It’s just a shame that history is repeating itself, and the stupid things surrounding the game let it down.

There’s no question about it: Splatoon 2 is better than the first game. But it could have been one of the best games of the year. Ignoring the justified complaints aimed at the first game has cost Splatoon 2 a chance at being one of the best multiplayer experiences available anywhere. At first, you’ll love it, and while the gameplay will always satisfy, the wrappings will slowly gnaw at you, and playing a map five times on the trot will make you take a break. I love Splatoon 2 and will be playing it for a long time, but it’s not the home run it could have been.

There is so much to like about Splatoon 2. When it comes to the actual gameplay, I don't think there are many experiences that touch it right now. It's addictive and enjoyable. It's just a shame that history is repeating itself, and the stupid things surrounding the game let it down.