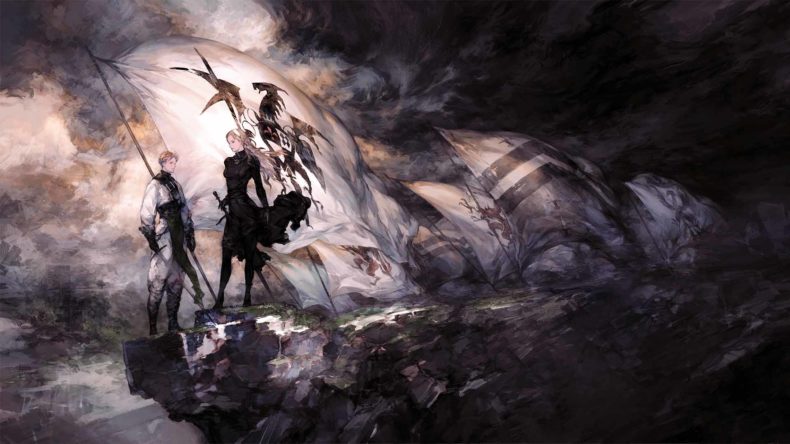 We spend so much time getting giddy about new releases, it’s easy to neglect the classics that started it all. Some games don’t age as well as others though, and it’s always disappointing when a childhood favourite struggles to live up with your memories. Fortunately you don’t have to worry about that with Tactics Ogre Reborn, because this tactics game still has all those strategy hooks you know and love.

Embroiled in civil war, the Valerian isles see various factions fighting after the death of their beloved king. It won’t take you as protagonist Denam long to decide where you fit into this tumultuous fantasy world, and begin leading an army of various magical and muscular people on a journey full of conflict, danger and decisions to make. It’s easy to get lost in the various names of countries, groups and battles if you don’t pay extra close attention, but for a game that originally released on the SNES it’s pretty impressive. 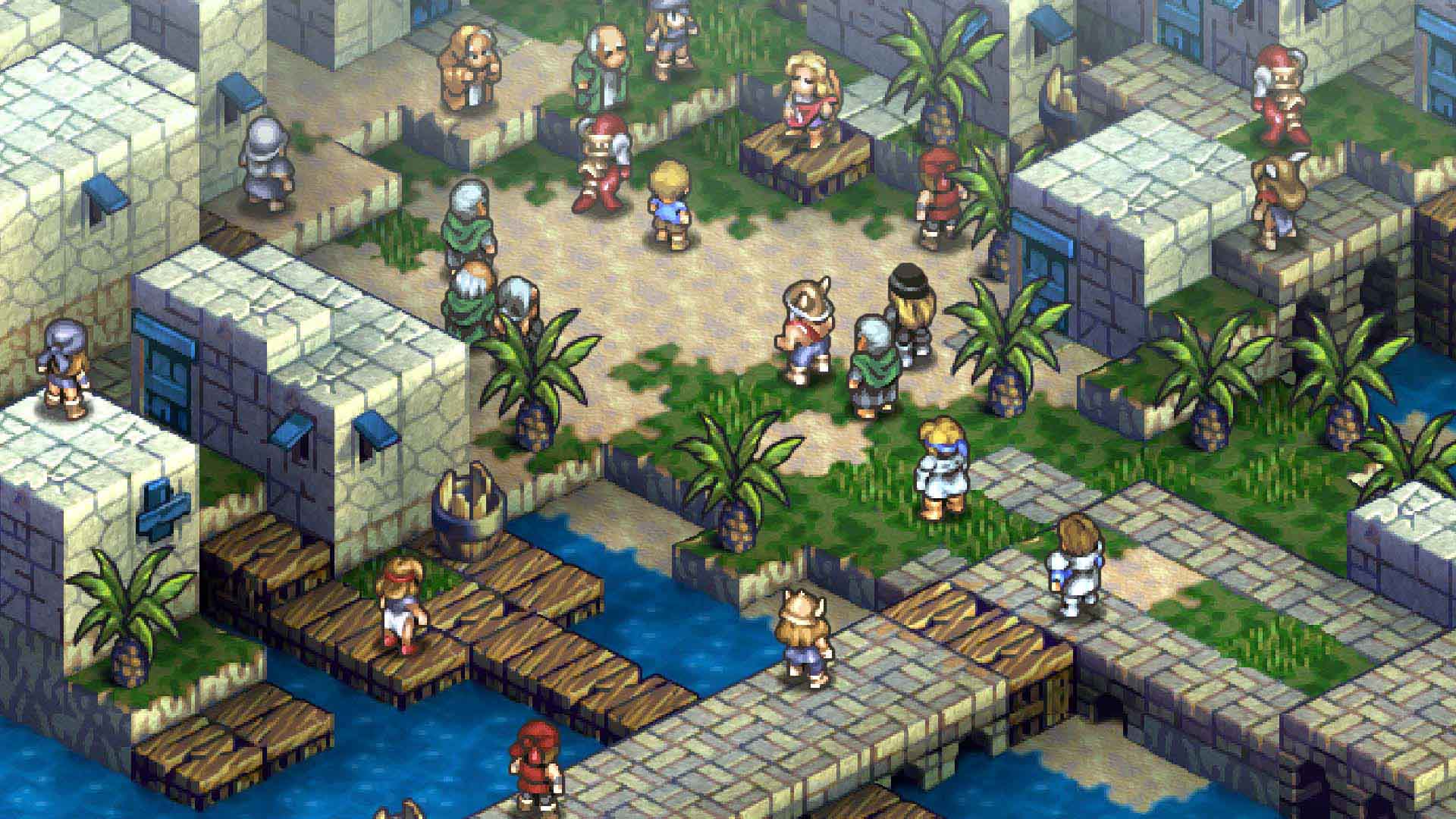 What you’re really here for though is the tactical combat, and Tactics Ogre Reborn has plenty of hours of that to offer you. If it all seems a bit familiar to games like Final Fantasy Tactics and Triangle Strategy then that’s because this game started it all, and even all these years later (admittedly with some new mechanics and a bit of polish) moving your team around the grid and choosing your best abilities is a blast.

Each character in your party is assigned a different class, with all the tactical applications you’ve come to expect. Warriors are best at getting stuck in and are good at blocking and countering enemy attacks, archers can rain down pain from a distance and mages have all sorts of spells to deal with the bad guys. It might sound a bit basic, but with plenty of classes unlocking as you progress as well as a whole host of passive skills to worry about you’ll definitely have your hands full.

Equipping your characters with the skills and gear they need to succeed is a huge part of Tactics Ogre Reborn. Sorting out all the usual jewellery and helmets that boost stats is simple enough, but the skills are something else entirely. These come in all shapes and sizes, from granting you the ability to use certain weapon types with ease, to enabling pincer attacks when you surround an enemy, or even granting a new usable move entirely. It’s fun playing around with them to beef up the party, but with only four slots per person there are some situational skills that get abandoned pretty quickly. 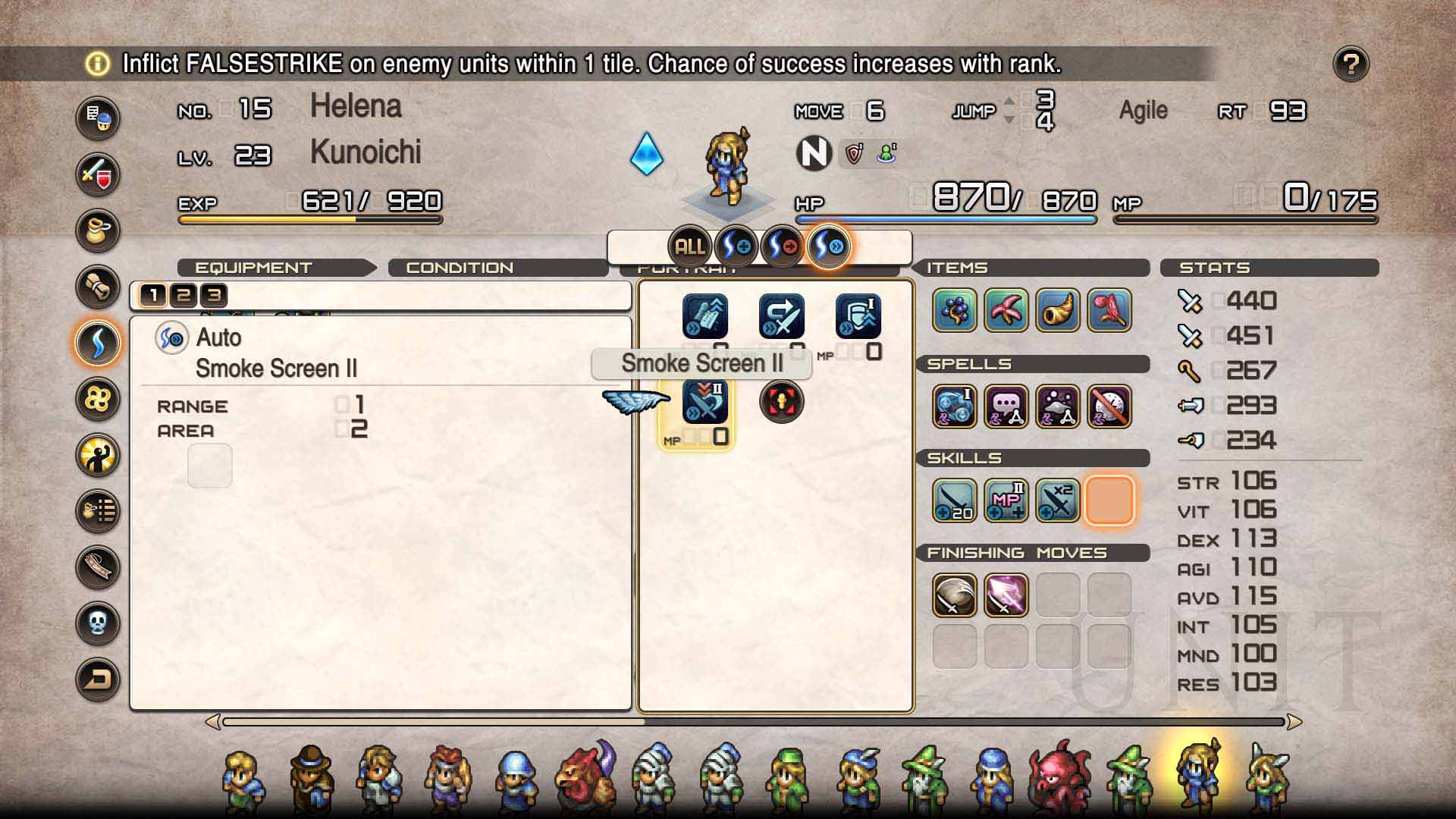 Once your team is geared up it’s time to get them some experience. Tactics Ogre Reborn has a pretty unique take on this, by granting equal XP to every team member who survives a battle. That is if your party level is high enough, because your individual units can’t level up higher than it and you’ll instead pump those points into handy charms. It’s a bit bizarre to constantly have your best characters hit this level cap, but it absolutely prevents you from over levelling and ruining the difficulty curve.

Although Tactics Ogre Reborn is a traditional tactics game from a time long passed, that doesn’t mean it’s lacking some seriously creative mechanics. Like the floating cards that constantly spawn on the battlefield and provide you with tide turning buffs that last until the fight is over. Deciding where to move a unit is even trickier when taking these cards into account, especially because the enemy can collect them too. 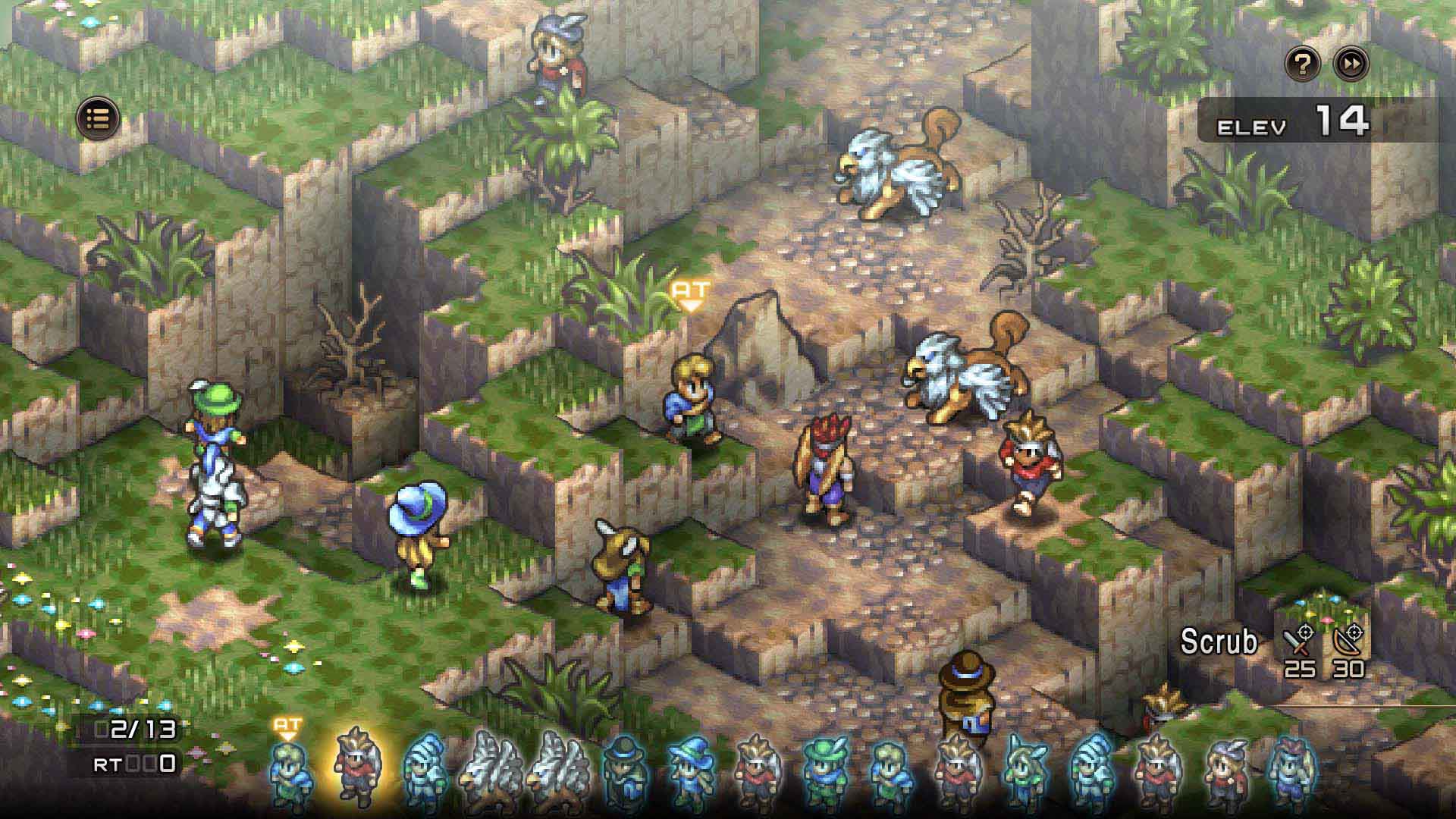 Another unique element of Tactics Ogre is the ability to rewind the battle. Using your Chariot tarot card power you can move back a number of turns and try out another strategy or save a teammate who was brutally taken down. It’s a tough game, so you’ve got to take all the advantages you can get.

Tactics Ogre Reborn is a huge tactics game, but if somehow there’s not enough content for you in one playthrough then you can check out all the branching paths in the story. The Wheel of Fortune (once unlocked) allows you to move around the timeline and check out anything you’ve missed, so you don’t have to play for tens of hundreds of hours to see the lot.

Visually Tactics Ogre Reborn has certainly had a bit of a glow up since it released on the PSP, but it still very much looks like an old game. Individual units are hard to tell apart, and the environments are basic and blocky. As long as you don’t go in expecting a full on remaster though you’ll probably cope, and it the less demanding graphics mean the game runs perfectly on Switch. 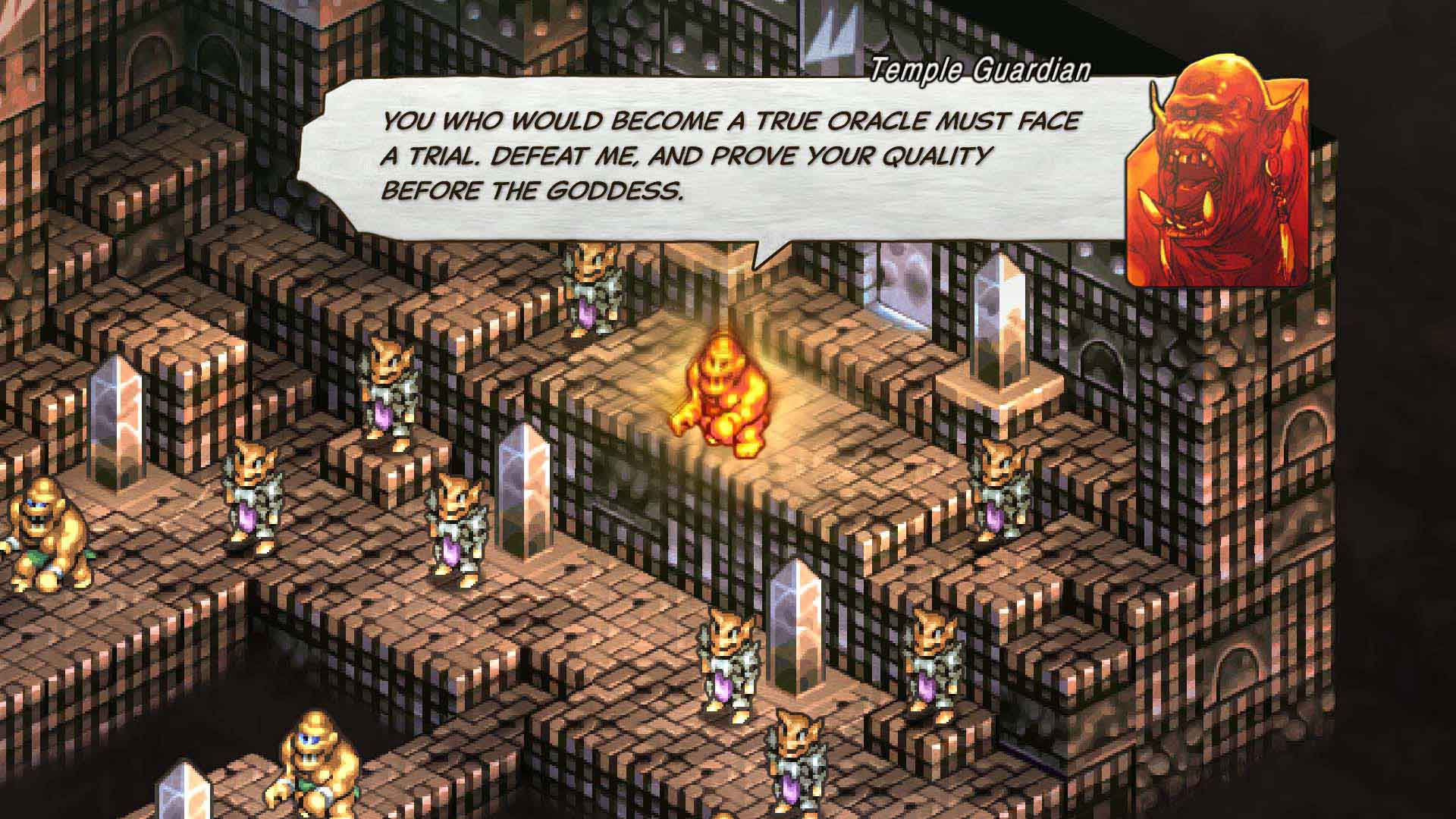 Above everything else though, I think Tactics Ogre Reborn suffers due to releasing in a golden age of tactics games. As impressive as it is for a game that’s decades old, compared to modern titles from this year alone it’s slightly lacking. After playing through Triangle Strategy less than a month ago, I couldn’t help but compare the thematically similar games and as unfair as that might be the Hd-2d masterpiece came out on top.

Tactics Ogre Reborn is a great remake of the tactics game that started it all, with strategic gameplay that’s still satisfying decades later. It may struggle to keep up with recent releases, but fans of the genre will still find a lot to love in this absolute classic.

Tactics Ogre Reborn is a fantastic look at the history of tactics games, and is still a blast even now.