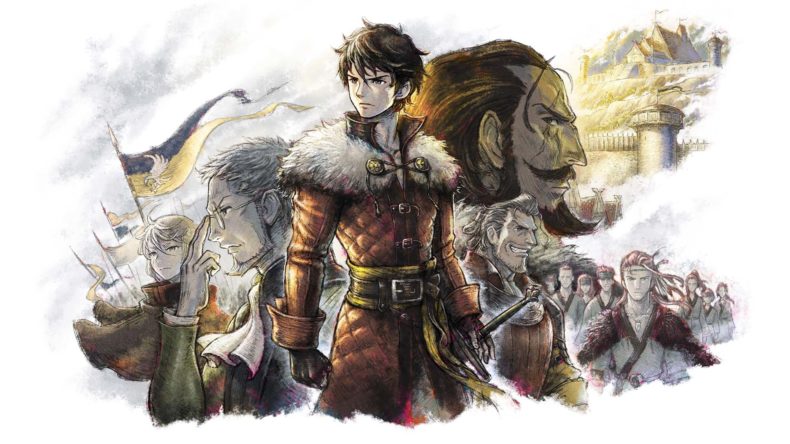 We’re living in a golden age of tactics games, with plenty of strategic options available for people who prefer thinking to action. This year alone we’ve had Mario & Rabbids: Sparks of Hope and Floppy Knights, and with heavy hitters like Tactics Ogre and Marvel’s Midnight Suns still to come there’s more where that came from. As if that wasn’t enough Triangle Strategy is out now on PC, and if you skipped it the first time around then this is your chance to redeem yourself.

The continent of Norzelia is enjoying some peace after the three kingdoms finally stopped the constant war. As the new Lord of House Wolffort, our hero Serenoa is dedicated to maintaining this peace and his relationships with all the higher ups of the kingdoms. As I’m sure you can imagine this doesn’t last too long, and an epic journey of political turmoil, heartbreaking betrayal and tragedy follows.

When it released on Switch at the start of the year there were some complaints about the amount of story in Triangle Strategy, which I could understand if it wasn’t exceptionally well written with wonderful characters. The fantasy war setting has all the twists and turns of a Game of Thrones or a Last Kingdom, and I was gripped from start to finish. 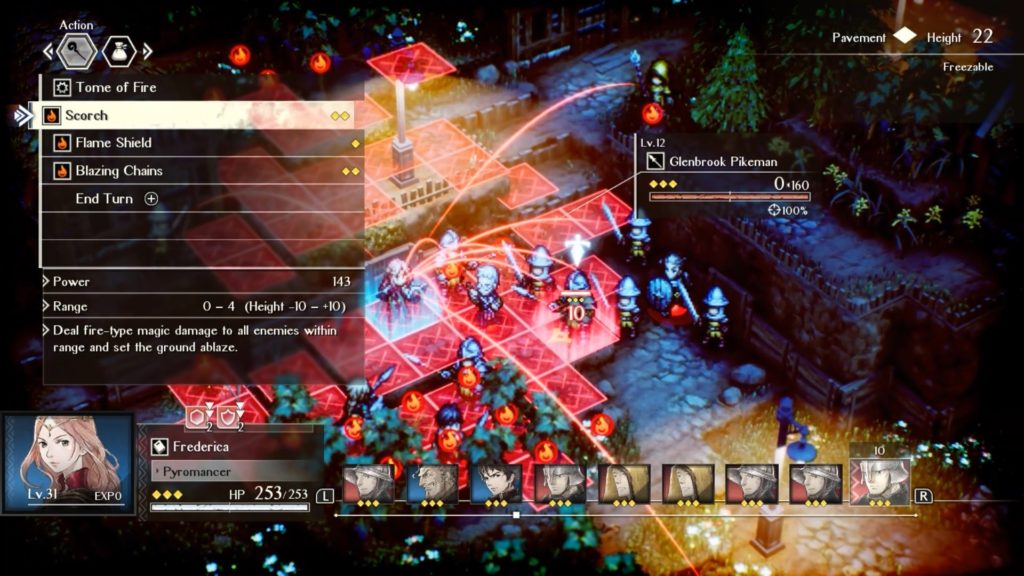 Words won’t always solve your problems in Triangle Strategy though, and more often than not you’ll have to guide your allies in battle against enemy soldiers. This is done with some very traditional grid-based tactics combat. If you’ve played anything from Final Fantasy Tactics to Disgaea before, then you’ll feel right at home here, and that is anything but a bad thing.

You see despite not bringing a huge amount new to the tactics table, Triangle Strategy takes all the best mechanics from its peers and polishes them to perfection. Taking turns to move your characters around and attack your enemies has never felt so good, with exceptionally well designed battles and plenty of options to consider in every fight.

I think what makes Triangle Strategy truly special is how different every member of your party feels. Serenoa himself is a pretty normal swordsman, but as he levels up he gets access to ranged attacks, an attack that delays the enemies turn and even a counter attack. Alongside the Lord you have mages with varied ranged attacks, a monk with lots of options to buff your team and a ninja who can attack twice a turn. Discovering the best way to use your favourites is a whole lot of fun, and before you know it they’ll be teaming up to take down wave after wave of baddies. 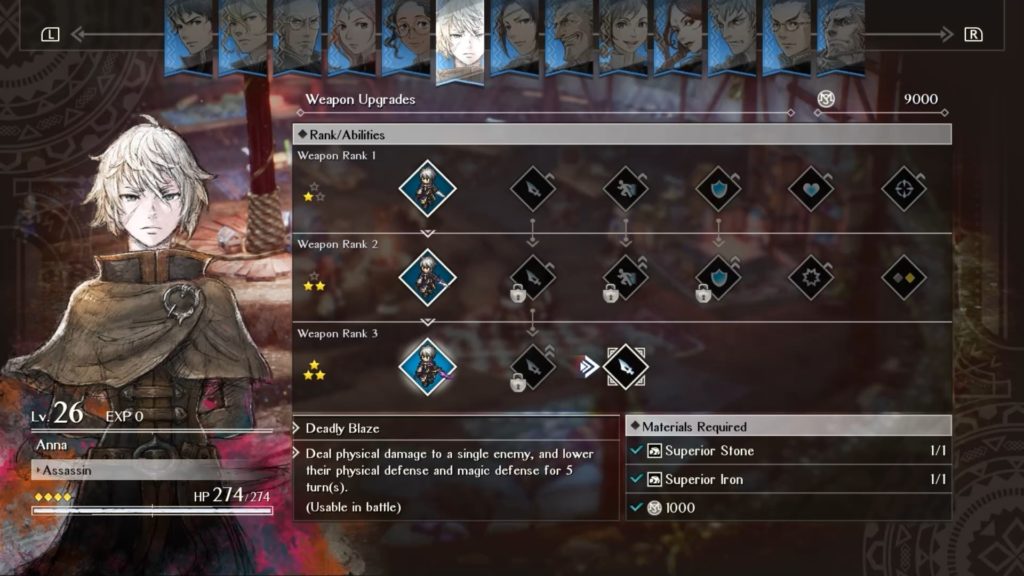 None of your units have the power to take on multiple foes alone, but together they are unstoppable. By taking advantage of your units positioning and surrounding the enemy, you’ll be able to chain together follow up attacks and deal deadly blows. Nothing feels better than pulling off the perfect manoeuvre and getting the drop on the enemies, especially because you get handy style points for doing so.

Between fights there’s plenty to keep the party busy, with loads of upgrades and equipment to manage. Each character has a skill tree to spend cash and resources on, with lots of options of how to spec your team. You’ll also want to buy some Quietus Abilities, which are powerful moves that can be used at any time to turn the tide of a scrap. The first of these I unlocked gave a free turn to a unit of your choosing, and the second restored half of any units health. To keep the game fair you can only use these once a battle, but you’d do well to remember them when you’re in a pinch.

As if the 35 hour run time (at the very least) isn’t enough, there’s plenty of reason to replay Triangle Strategy once you’re done. This is because there are all sorts of decisions you’ll need to make throughout the story that send you on branching paths. The most important of these aren’t made by Serenoa directly, and instead he asks his close allies to vote on these decisions. Before the votes you get the opportunity to try and sway the party though, which leads to some interesting character moments. 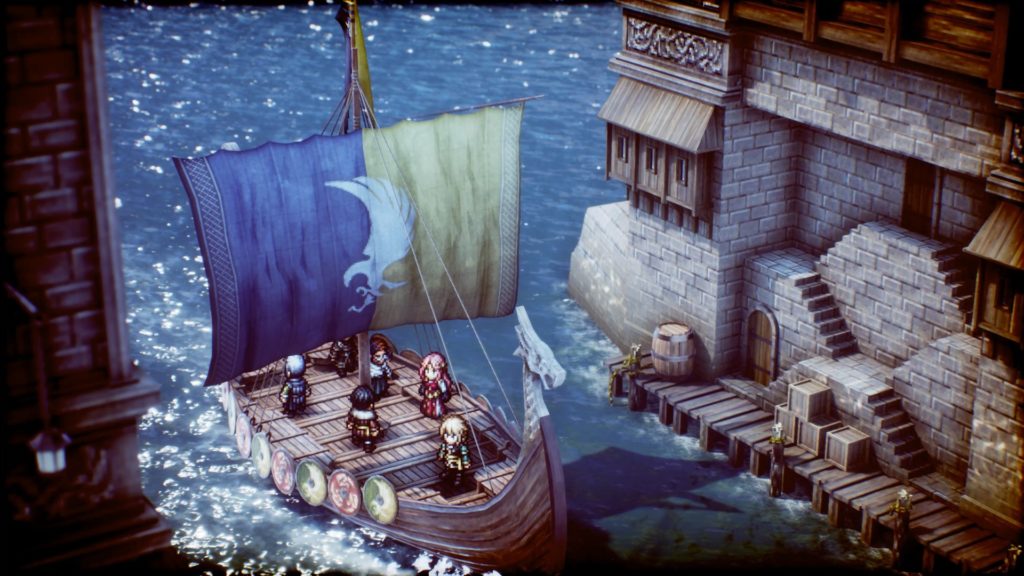 My time with Triangle Strategy was solely on the Steam Deck, and I can happily report that it runs perfectly on the lovely handheld. The gorgeous HD-2D graphics really pop on that beefy screen, and being able to pick up and play definitely helped those hours tot up quicker than they would’ve otherwise.

Triangle Strategy is an exceptional tactics game, but it isn’t without issues. The most notable of these is how under-levelled you will be no matter what. Unless you grind and repeat optional missions multiple times you’ll be at a disadvantage in battle, and this becomes even more of an issue when the game starts spawning in enemies to catch you off guard. Battles can end up lasting close to an hour in the late game, so replaying them when you lose can be a drag (although keeping the XP means it’s never for nothing).

Triangle Strategy is one of the best tactics games I’ve ever played, with perfectly polished combat and an engaging story. If you can’t get enough of grids and don’t mind a bit of reading, then you owe it to yourself to play this game.

Triangle Strategy is a quintessential tactics game, and now that it’s on PC even more of you lucky lot will get to play it.