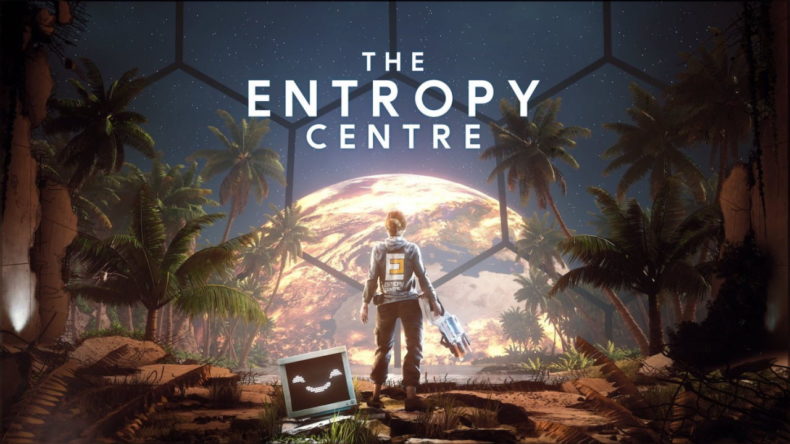 The best puzzle games have to, at times, well and truly stump you. They need to make you feel like an idiot, as though what’s in front of you is insurmountable, impossible even. Because then, when you figure out the solution, you feel like a genius. Each victory gives you that little endorphin hit and a smug grin on your face. And on you go to repeat the cycle, craving the next test, and eventually the next triumph.

And that cyclical nature is fitting to what The Entropy Centre by Stubby Games is all about. You are Aria, and you wake up confused and alone in The Entropy Centre, trying to figure out what’s going on. You realise before long you’re an employee of this strange futuristic establishment, and solving the puzzles throughout the complex with a tool and guide (a talking gun named Astra) that has the ability to rewind time on objects is your job. You’ll use this rewind function to overcome all manner of 3D puzzle rooms which would otherwise be impossible.

Wait, a futuristic puzzle environment, a gun with a unique puzzle-solving mechanic and even a robotic voice cheering you on? Yeah, The Entropy Centre definitely owes a nod or two to Portal, but that’s no bad thing. Portal was great, and let’s be clear: this is no shameful rip-off. The Entropy Centre has a lot of clever thinking behind it, as well as a couple of poignant stories to tell. It’s certainly inspired by greatness but stands on its own two feet throughout. 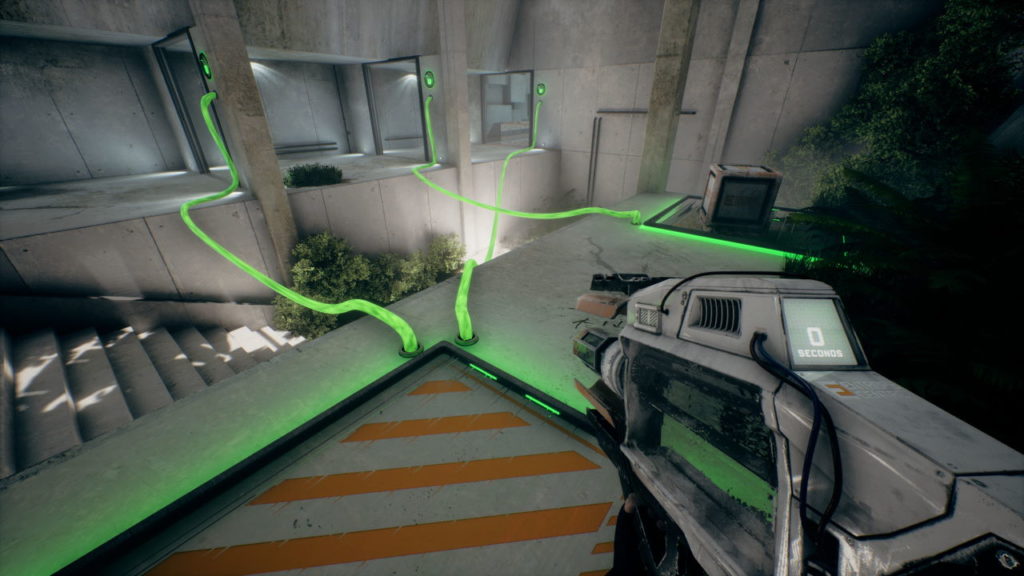 The way it works is you need to get yourself through the exit door of each puzzle room. However, it will likely be locked and certainly inaccessible by normal traversal. An early example is when you’ll need to get through two locked doors, each operated by a pressure switch. You could pick up a handy Entropy cube and place it on one switch, but what about the other? Well, place the cube on the switch to the second door, and then the first. You go through the first door, then rewind the cube, back to when it was on the other switch, and now the second door unlocks for you and you pass through.

From there things ramp up with more complex and considered puzzles. Rooms become larger and more involved, and as you progress through more puzzles, different items are introduced. Your basic cube is first, but soon you’ll be working with jump pads, laser blocks, bridges, and conveyors. You’ll even have to utilise nature by making use of water and air currents to your advantage. There’s a lot of variety on offer, and plenty for puzzle fans to sink their teeth into.

The main reason the puzzles work so well and stump you is that they literally make you think backwards. The key to success is understanding what things need to happen, and then doing them in reverse, so that rewinding things puts things in the correct order. And no matter how many puzzles you do, that mirrored thinking can still be confusing. It’s a delicate, and ultimately delicious balance of a simple concept that’s tweaked and twisted in so many clever ways. 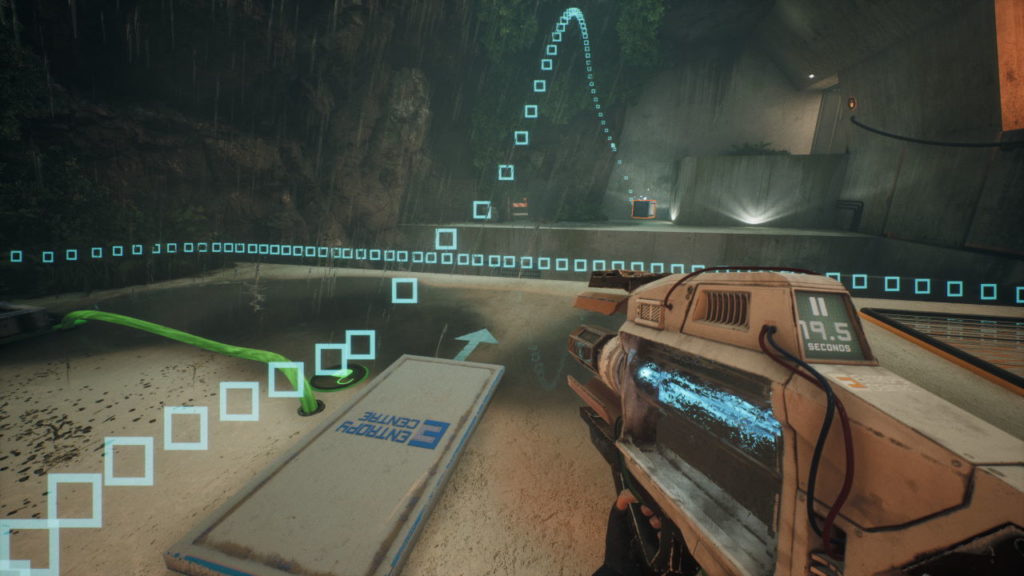 Each puzzle sector has four or five puzzles in it, and each sector introduces one of the new devices such as the cube or the jump pad. The earlier puzzles in each sector tend to start off easy, to introduce you to the new item, but definitely change gears after a couple of puzzles. It’s a great way to get you used to new mechanics, but it does mean the learning curve is more of a wave pattern with noticeable peaks and troughs. You’ll find yourself breezing through some puzzles, whereas the next could stump you for 15 minutes. And it left me with this contradictory feeling of mostly having that “one more puzzle” vibe, but occasions where I needed a break as a complex puzzle was too backwards for my brain to cope. I always wanted to return to The Entropy Centre though, and in reality, fresh eyes and perspective are often more than enough to get you through.

The only fiddly time I had was occasionally using jump pads and feeling I’d landed on them and the game thought not. Or the opposite, and I thought I’d placed a jump pad next to me but at a safe distance, only to find myself inadvertently launched into the air, and potentially to my death. Luckily the checkpointing is fairly generous so these occasional mishaps are easily rectified. Every puzzle room also has a reset button should you need to have everything back where it was at the beginning quickly.

The gameplay is responsive and with Astra as your gun, you feel in control of your surroundings, which is key. Areas outside of the main puzzle rooms can require quick reflexes and fast traversal, and there are even light combat moments too. It can get hectic but you never feel frustrated that Aria feels unresponsive, and as such these faster-paced moments offer a nice foil to the more relaxed puzzling moments. 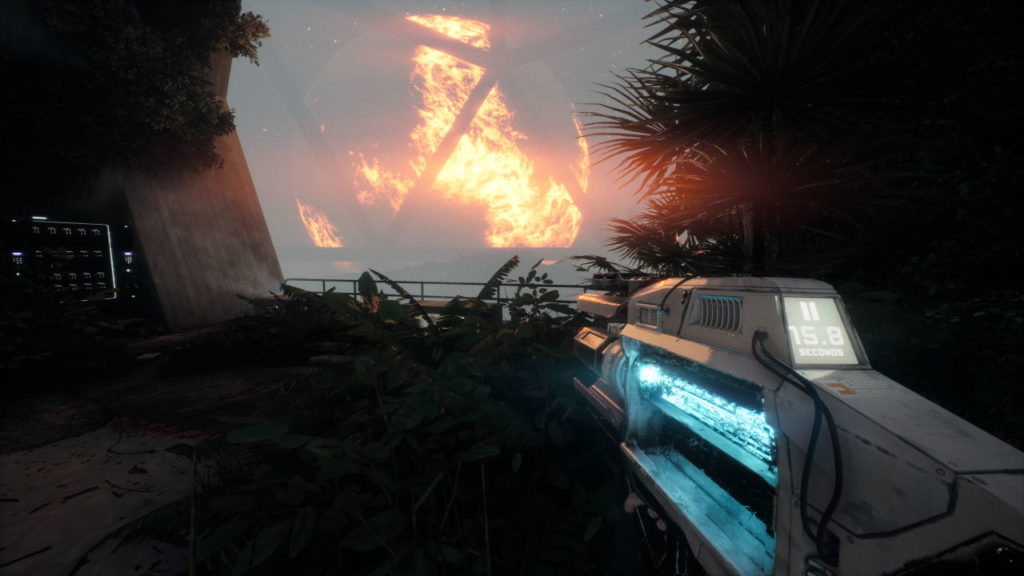 Throughout the journey you’ll learn more about Aria; what The Entropy Centre is; what it was doing, and why it now stands empty and decrepit. There’s a thought-provoking, if blunt message about the state of humanity too. Collectibles are present too in the form of emails on still-working PCs. Reading them not only offers an insight into the daily lives of the staff at The Entropy Centre, but also more serious decisions that management needed to take and the impact they had. It’s a nice filler to the story, but your collectibles are still emails, and the fun that comes with reading them, which feels like a slight missed opportunity.

The Entropy Centre is a fun, accomplished, and clever puzzler. It takes a simple idea and iterates it in so many clever ways that it still feels full of ideas right to the end. It’s taxing, but in the best way, with enough variety so that it never gets tired and repetitive. Yes, it is inspired by Portal, but The Entropy Centre is its own success. And whilst it might not be quite as superb as Valve’s epic, The Entropy Centre is a great example of the genre, standing head and shoulders above most in the field.

Very clever concept
Taxing puzzles
Plenty of variety, both in and out of puzzles

The learning curve can be up and down

The Entropy Centre is a fun, clever, and taxing puzzler that rewards your effort, persistence and, frankly, backwards thinking.