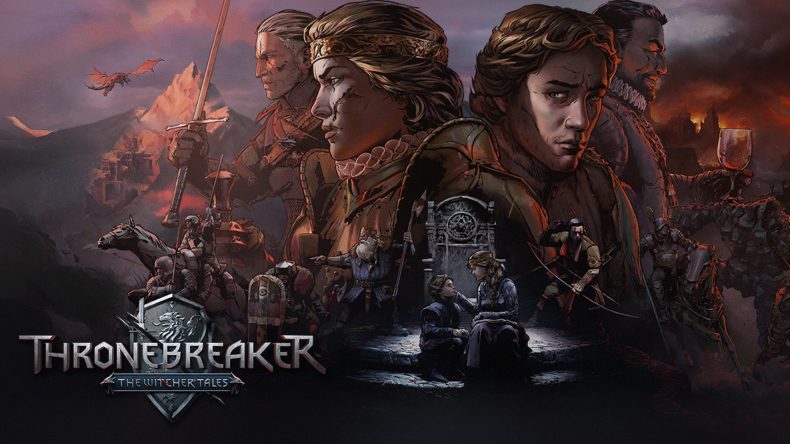 Nobody could have predicted that a new game in The Witcher series would be announced this year. Even fewer people would have predicted that the same game would be released so soon after the announcement on PC, with a console release due just two months after that. Thronebreaker: The Witcher Tales is not the next chapter in Geralt’s adventures; in fact it’s actually a prequel set many years before even the first Witcher game. It is partly set in the White Wolf’s homeland of Rivia, but our white-haired friend is not the focus of this story, and instead that mantle falls to Meve, queen of Lyria and Rivia.

The queen’s lands are on the brink of war, as the infamous Nilfgaardian Empire encroaches on her borders. Returning from a meeting of leaders, Meve finds her kingdom in disarray and her son Villem doing very little to stop bandits from pillaging her lands. Of course, our warrior queen is having none of that, and so you charge into battle as Meve to free her country from the threat of bandit raids. You’ll do this by engaging in turn-based card battles, using a newer version of the Gwent game made famous by 2015’s stunning The Witcher 3: Wild Hunt. Don’t let that put you off if you were hoping for a more traditional RPG combat system, or if you’re not a Gwent fan, because Thronebreaker’s card combat is excellent. Standard battles basically work using a best-of-three system, and the goal of each round is to have a higher score than your opponent. There are a few ways in which you can earn that higher score, such as directly damaging opposing units or simply putting down high-rated cards. Some cards offer healing abilities that can restore points to your units (and therefore your overall score), and some cards can combine with others to increase their damage output or trigger other unique abilities. This “synergy” is sometimes essential to winning battles, and often Meve herself can turn the tide when you trigger her leader ability.

The thing with Gwent, especially in Thronebreaker, is that you have to accept right away that only select cards actually deal damage. This is often where synergy comes into play. Take the arbalest unit for example: putting this card down by itself is pointless, as it will only deal one damage point. The arbalest’s strength lies in its fellow units, as its damage output scales with every card that it stands beside, so placing it beside five other cards will add five to its damage output. If this all sounds a bit complicated, it’s because it is. The tutorial doesn’t really explain synergy, but in taking careful note of each card’s abilities, you will get the hang of it after a while.

You will need to understand synergy if you want to take on the game’s most unique addition: puzzle battles. While these highlight the all-too-basic tutorial’s flaws, they do offer something a bit different to the usual card battles. You might be given a special deck to work with, and you may even have to defeat your enemy in a very specific way, which is where synergy comes in. It’s not as simple as using brute force; it’s all about taking your time to think about how to play your cards in the correct way, in order to solve the puzzle of these encounters. It took me a while to understand how these worked, because I struggled with my lack of synergy knowledge, but the challenges were great fun once I knew what was going on. Existing Gwent fans will love this new idea too, as it adds a little variety to proceedings. True to The Witcher’s main outings, Thronebreaker’s story thrives on player choice. These choices often involve choosing the lesser of two evils, to the point that the game even comments that you have chosen one evil over another after certain events. Meve’s story, much like Geralt’s, is full of grey areas and so you will really need to put genuine thought into which direction you want to go when presented with an ultimatum. Do you save an elf from a bloodthirsty mob, or believe the tale that he was actually a spy? Do you grant the last wish of an enemy, or leave them to die without honour? On the surface, some choices seem simple enough, but they will often trigger new twists further down the line, sometimes many, many hours after the fact. Thankfully you’re not pressured by time limits, because several times I had to take a few minutes to weigh up the options of a decision, only for them to still backfire later on. One even led to the murder of several dozen people, leaving my whole retinue, including myself, shocked to the core. No really, I was genuinely stunned by that one.

Queen Meve’s story is full of these moments, all written spectacularly and told using semi-animated, painting-like scenes. Again, fans of The Witcher 3 will recognise this style, but whether you’re one of those, or someone completely new to the series, it’s impossible to deny how beautiful Thronebreaker looks. Between battles and puzzle events, you will spend most of your time exploring the various areas of the world, seeing places yet unseen in any of The Witcher games. You will see Rivia, Mahakam, home of the dwarves, and many more places that I won’t spoil for you here. Each of them looks like a painting, even reminding me of Warcraft III or perhaps Diablo III at times, thanks to the way colour is used to such great effect. Even swamplands somehow pop with greens and yellows, showing that a game needn’t be drab and brown to appear realistic or to suit a particular tone.

Don’t expect to be venturing around a living, breathing world like in Wild Hunt or its expansions, as exploration in Thronebreaker is largely there to allow you to gather resources and to stumble upon new characters that you may invite into your ranks. There are some nice stories to be found, but as they are told through the narrator reading a story, interspersed with pieces of dialogue from other characters, it’s almost like a game of Dungeons & Dragons as your imagination is often required to fill in the blanks. This isn’t a criticism, more a warning not to expect a more cinematic style of storytelling. Through the gathering of resources, you can expand your camp and improve your forces. This is essentially levelling up your army and eventually your units, so it really is in your best interests to find those resources in each area. Sometimes you’ll come across places of interest, in which you’ll have to make a decision whether to sacrifice wood, gold, soldiers or a combination of those things, in order to receive a greater reward or simply to help a character or clear a path. Beware though, for sometimes this might result in a loss of soldiers and/or morale, and that morale can alter the effectiveness of cards in battle.

It’s these decisions, coupled with the bigger, weightier ones, that make Thronebreaker so good. The Gwent combat is great and the story itself is obviously impressive and beautifully written, but none of it would work without choices that genuinely affect the direction of events on Meve’s journey. Sure, sometimes the game will make it clear which decision is best for you, but as I said earlier, most of your choices will require real thought, because choosing the “good” path isn’t always the one that results in the best outcome. It explores the murkiness of humanity and war in such a way that you’ll often not even like Meve, but you will understand that she’s a queen and has to do what is best for her people in dark times. That requires a few dark paths. Whether you take those paths is up to you, but you will have to decide for yourself whether you can stomach the results. I was never able to grasp Gwent when I played The Witcher 3, so I had my worries when I learned that it was the foundation of all combat in Thronebreaker: The Witcher Tales. Thankfully, though it could have done a better job of explaining synergies, it does do a good job of making things easy to understand, in turn making it accessible and fun. It even offers, on the easiest difficulty, the option to skip battles entirely, for those wishing to simply explore the lands and experience the story. But you will want to play the Gwent battles, because they’re full of tense and exciting moments, with many even shortened to keep things moving at a good pace. Despite that pace however, I can’t deny that the game sometimes felt overlong. Without a more substantial reason for exploration, you may find yourself simply gathering resources in empty corners of the map, rather than seeing new and interesting areas with unique environmental storytelling. That said, when the stories are told, be they large or small, they more than make up for these quiet, emptier moments of aimless wandering.

If you’re looking for a good story with fun and interesting card battles, Thronebreaker: The Witcher Tales is one of the best RPGs of the year, and definitely a worthy addition to The Witcher franchise.

Goes on a little too long
Tutorial is too basic

It may not be The Witcher game you expected, but Thronebreaker: The Witcher Tales is an exceptional addition to the series, and a must-play for all Gwent fans.