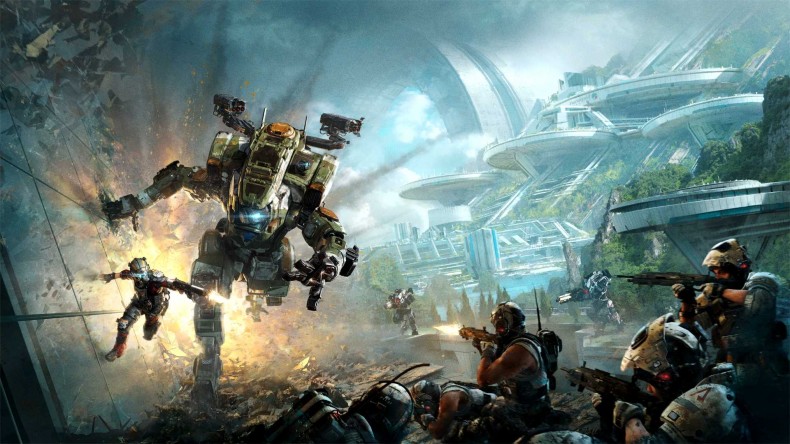 “The Pilot is the true dominant force” we are told in the cinematic introduction to Titanfall 2; that grace and agility on the battlefield is what defines a Pilot, but it is the bond with the Titan that truly distinguishes them from the other soldiers fighting alongside. That small, three minute introduction does everything to announce what Respawn intends to display in the single player campaign, and what a campaign it is! Titanfall 2 is a masterclass in movement and map design, perfectly blending the elegance of your Pilot with the solid, sturdiness of your Titan.

The original Titanfall was a game that attempted to rejuvenate and reinvigorate the online FPS multiplayer experience, and it managed to do that with no small effect. Made up of some of the team from Infinity Ward that was responsible for the excellent Call of Duty 4: Modern Warfare, it was no surprise that Titanfall delivered something that felt fresh and new in the stagnating online shooter space. A much lauded multiplayer experience at its launch it had a few criticism levied at it mostly in relation to the lack of a campaign mode.

Fast forward a couple of years and Titanfall 2 launches with a full single player story based campaign, as well a newly revised online mode. Gone is the ham-fisted attempt to build up the universe lore through a multiplayer campaign that was essentially nine chapters of versus modes game types with a loose, uninspired narrative woven through it, now we have a nine chapter story that follows the relationship between field promoted Pilot, Jack Cooper and the Vanguard class Titan, BT-7274; or BT for short. The campaign begins in bombastic style; a mission gone awry that leaves you alone with the Titan of your training master pilot, Lastimosa. What follows in the first mission is a brilliantly executed level that serves to help you familiarise yourself with the movement of your pilot, and latterly the controls and abilities of piloting a Titan. It is the movement of your pilot that is an absolute stand out. With the exception of the original Titanfall, never in a first person shooter has the movement felt so fluid. There is a real joy in the way you move around the environment, double jumping, wall running, and zipping along wires to give you lots of tactical options for clearing a battlefield. You have the freedom to go almost anywhere at any time and the traversal is a constant pleasure with the controls being both reflexive and responsive.

The presentation is flawless, the frame-rate is smooth as butter, and it looks gorgeous. Environments are beautiful, richly detailed, and vary in locations from lush, dramatic landscapes, to futuristic urban locales. Astonishingly for a militaristic shooter, rather than a simple process of getting from point A to point B shooting the bad guys in between, each location presents an environmental puzzle as a framework to tell the story, all the while taking the opportunity to demonstrate over and over again how joyful the movement is. The chapters are consistently surprising with varied and inventive ways that help redefine and reshape how a shooter plays. Without spoiling any story beats, there is one chapter in particular that is an absolute stand-out, taking the corridor shooter idea and re-inventing it in a remarkable way that is incredibly fun to play. Titanfall 2 does nothing groundbreaking, but it does make the familiar tropes of first person shooters feel fresh and new again. The influences from other games in this genre are clear. There is a strong Halo influence in the grandeur of the battle arenas, your Pilot and Titan feel like an unstoppable force in much the same way a Spartan commands the battlefield, and the relationship relationship between Cooper and BT is strongly reminiscent of the Cortana and Master Chief. The story too, weaves its way through the game smoothly, pushing you from encounter to encounter with a clear view of what you should be doing and how you go about doing it, BT providing a secure anchor point at all times.

The guns, while lacking in any great visual variation, feel weighty and effective. There is a real sense of impact whenever you shoot anything. Aiming is tight and there is satisfactory thud when hitting targets. The melee is also outstanding with a series of different animations that thud and vibrate from impact. Every punch and shot while on foot feels hefty, and every section whilst in a Titan has weight and purpose. The AI is competent, flanking and maneuvering, but only on the harder difficulties does it pose any real challenge so effective a killing machine you are.

There are a few other surprising additions, Respawn has added a simple dialogue option for your character which serves to solidify the relationship with BT, and by the end of the story you will feel totally connected and invested in their burgeoning relationship. The buddy relationship with your Titan serves up a few moments of humour as the connection continues to grow, while the enemy adds a few psychotic beats to the tale. The story kind of fizzles out a little towards the end, but it culminates in a satisfactory way, and leaves just enough open for an inevitable sequel. The multiplayer, then, is in many ways the spiritual successor to Modern Warfare 2 – reminiscent of the difference between Modern Warfare and Modern Warfare 2. Titanfall 2 has the same great multiplayer experience that we enjoyed in the original, with character progression and fluid combat experiences, only everything has been tightened up. The pace of gameplay has been tweaked ever so slightly, and a range of new maps have been introduced.

In fact, it feels slower this time around. There’s still plenty of running around at high speed, jumping off walls, and now with the introduction of the Grapple Hook, swinging between buildings, but the pace of gameplay definitely feels a little slower. That’s not a bad thing, though, and the pace has definitely increased somewhat since the beta weekends, most likely due to player feedback. Titans are much more common now, since their time-to-call having been decreased. When a handful of Titans are on the battlefield, the game has a different feel to it, and you’ve got to think more carefully about your chosen route to the objectives, maybe trying to take out a couple of Titans out on the way.

Being a Pilot never feels underwhelming, even when facing Titans. The anti-Titan weapons are effective, but you just can’t beat that feeling of jumping on the back of a Titan, pulling out their battery and shoving a grenade down the inner workings. When you successfully pull off this feat (now a two-step process, taking longer than it did in the original) you certainly feel badass, as you watch your opponent explode. It’s always feels like a “yes!” moment. One of the best aspects is that even with the introduction of new weapons, kits, and ordnance, there doesn’t seem to be a feature creep. Respawn has done a great job of balancing unlocks, so you never feel overpowered by someone who’s been playing the game ten hour longer than you have. There are only a maximum of three different weapon unlocks available for each weapon type: Assault Rifles, Grenadiers, and Sub-machine Guns having a total of four variations (including the one you start with), three LMGs and Sniper Rifles, and only two shotguns in total.

Levels feel big and open at first glance, but there are plenty of intricacies and tightly designed close-quarters areas around objectives, that act as a kind of bottleneck to introduce players to each other; encouraging combat. If you’re a sniper, there’s usually a hill, mountain, or tall building for you to camp on, and watch over the outskirts of the battlefield, but if you’re the sub-machine gun or LMG-type player, there’s plenty of cover from said campers, in the nitty-gritty of the level interiors, for you to run around wall-banging to your heart’s content. Don’t discount the Shotgun experience, either. Paired with the ‘Stim’ tactical ability (which quickly heals and boosts your speed for a short time) the shotgun is actually a pretty intense experience, boosting into combat at hyper speed, shooting a few unsuspecting Pilots in the face before zooming out to safety and healing up again.

To earn Merits (experience points for the game) you have to complete match based objectives (kill three pilots without dying, etc), but you can also spend credits to do it sooner, though these are few and far between. Camos, though, are only unlockable by meeting their criteria, whether that’s reach level 10 or get 100 kills with a specific gun. This makes them rare, and essentially means they are quickly going to become how way players show off online. You can browse the Camo libraries and see which challenges you need to meet, in order to unlock them yourself, thus adding another layer of depth to the multiplayer experience.

But there’s plenty in the multiplayer to keep everyone happy. From the person who jumps in for a match or two every now and then with their basic setup, to the hardcore fragger who’s unlocked all the Camos and has a different Kit for each mode. What’s important, though, is that although it caters to both extremes, it doesn’t ever make you feel like you’re behind. There’s always something to aim for, a new unlock or challenge, but you aren’t left feeling like a newcomer in an eSports pro match, as is often the case with other FPS titles. If you’re not having much luck with the one weapon; try something else. You don’t have to put in 30 hours to unlock the best gun in the game, you’ll still be able to handle yourself on the field. Regardless, anyone can jump on the back of a Titan and feel instantly powerful as you tear it apart.

Titanfall 2 feels like a game where the developer has taken what makes a shooter fun right back to the starting point and added layers of detail and nuance that as a sum total is a spectacular example of an entertaining video game. It’s the culmination of an extra-ordinarily talented team who clearly understand what makes shooting stuff fun. FPS games are always about the balance between your gun, grenades, and your melee which are all presented flawlessly by Respawn; and from that basic framework, the story has been draped over it to provide countless opportunities to experience the sheer joy of the freedom of movement and the base pleasure of feeling your bullets thud into the enemy. The presentation is effortless in its execution and it feels totally effortless in your hands. In a year of incredible shooters already released in Gears of War 4 and Battlefield 1, Titanfall 2 is another outstanding example which absolutely stands out from the crowd.

Some multiplayer impressions based on time at a two-day review event played on PC by Calvin Robinson, where accommodation was provided by EA. Our score can be considered “non final” until we’ve tested in a live environment, whereby this sentence will be removed from the review. Though it’s unlikely our score will change unless the live servers are essentially on fire and it’s never fixed: see Halo: TMCC.

Titanfall stands out as an example of how there is still plenty of room for innovation and newness in a crowded genre space. It's superbly executed and incredibly fun to play.