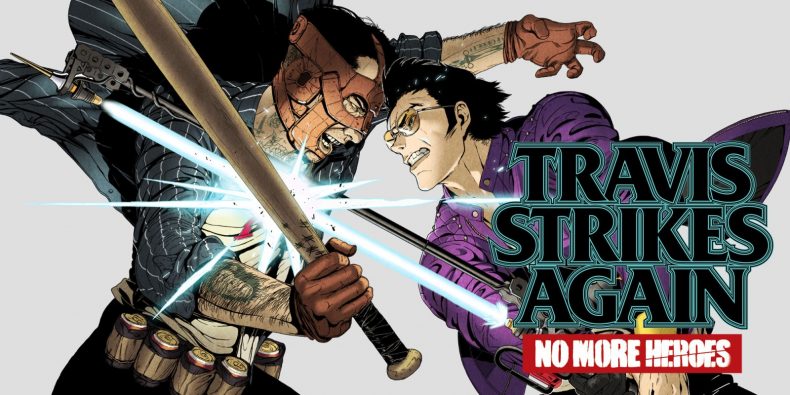 Travis Strikes Again: No More Heroes is definitely one of the weirdest games I’ve ever played and I don’t think that’s down to my elevated temperature (as a result of flu) or the fact I’ve considerably medicated myself to get to a point where I can function daily. Travis Touchdown’s newest adventure is just plain bizarre, and to be honest the sheer ridiculousness of it is probably its most interesting feature.

The premise is that Bad Man is looking to take out Travis to avenge his daughter, Bad Girl’s death and so he happens upon Travis’ trailer in the middle of nowhere and proceeds to attack the otaku assassin. During their fight, Travis’ game console the Death Drive Mk.II suddenly sucks them in, and now they must play the games (known as Death Balls so they can say ‘balls’ a lot) for some supposed reason. After they’ve completed a game they get thrown back into the real world, so I really have no idea why anyone would decide to keep going back into a homicidal game console. Aside from a dodge roll and a jump button Travis is equipped with two standard attacks, by holding Y Travis will swing his beam katana in front of him and do about as much damage as a rolled up newspaper (still enough to take out the basic fodder), or press X for a heavy attack that can be chained into a second hit, but of course this is slower. As you go through the game you’ll acquire skill chips which bestow you with a range of extra damage-dealing abilities, and playing with these so you can mitigate the large enemy hordes you’ll frequently have bearing down on you is essential.

The Death Drive Mk.II (DDMKII) is an unfinished console, and because of this it has a lot of bugs, and it’s these bugs that make up the different enemy types. So, we’ve got Zuckerbug, Lady Bugbug and Goldbug, your basic name pun-based humour. Those names are about as original as the enemies get, as pretty much all of them are palette swaps with an extra ability or two. And aside from the fodder enemies (which are ridiculous weak) all the enemies pose little threat on their own, but in groups they can be terrifying.

There’s one enemy with drills for arms that cannot be staggered no matter what, meaning that attacking involves you hitting once and running away and repeating until you finally take it down, while another enemy has a beam katana like yours, but can also fire bullets. This enemy is especially annoying because it’s possible to take damage while downed, so if this enemy knocks you down they can then shoot you while you’re prone. If there are other enemies around you’ll find yourself stun-locked to death; a cheap and frustrating tactic to have to deal with. The levels really range in quality, with most of them bearing the look of a low budget PS2-era game. I get that this is a pastiche of gaming and as a result it’s a deliberate design choice, but it means that in play the game is butt ugly. Travis’ trailer between games at least looks nice, and the introduction sequences to each game are some rather brilliant pieces of work, but the combination of low-fi aesthetics and a horribly zoomed out camera really make this a terrible looking game. I guess a special mention should go to the Dragon GP level for its vector graphics during the races, but none of the other levels even attempt anything as clever. The majority of the time the game looks like something you’ll see people playing in the background of Eastenders.

Travis Strikes Again does this to you though, the ideas behind the levels are solid, with each new game accompanied by an info card that tells you the game’s storyline, genre, and even cheat codes (if they work, I attempted some of them and couldn’t get them to activate), but nothing is done with these ideas. You’ll do some racing in Dragon GP and a bit of (admittedly poor) platforming in Coffee and Doughnuts (weird because it’s supposed to be an SRPG), but the idea that these games are different genres is never built upon. You’ll still be running around waving Travis’ beam katana at a range of multi-coloured, skull-faced enemies and before long that grows tiresome. In effect it grew tiresome for me in the second level which plays out of a top down, zoomed out map grid, with you following the roads fighting enemies to enter a house to fight more enemies and use the toilet (yeah, these are save points again). Once done you have to do it again, but now you’ll have to hit switches to turn parts of the map to be able to progress. Get past this and you’ll need to do it again, only now you’re followed by a giant blue face that will kill you immediately if it touches you. Having to kite that thing around as you work out how to hit the switches goes on way too long and it really isn’t any fun.

I’m actually going to be positive now and say that at least the boss fights are pretty good here. They’re a rag tag bunch of weirdos, from murderers to sumo wrestling race car drivers, and also a returning character from another Suda 51 game. Their intricate patterns and phases offer little in the way of attack windows and as such will require you to create openings using your abilities. Whittle those multi-layered energy bars down and there’s a brief QTE that results in Travis suplexing them to finish them off followed by a Street Fighter-esque ‘YOU WIN’, which is all a bit of fun.

Speaking of which, the sound here is brilliant as well, there are countless homages to different games littered throughout, and the sound effects are perfectly placed too. Charging up Travis’ katana when it runs out of energy elicits a perfect success jingle, and acquiring a new skill chip at a level’s end has Travis lifting it high like Link and accompanied by piece of music different enough to avoid a lawsuit. After clearing a level you’ll be invited to check out a new scenario in a separate thing called Travis Strikes Back, accessed through Travis’ bike. In this you’ll read along with Travis’ adventures to find the Death Balls, and that’s it, you read. This mode is at least filled with references, fourth wall-breaking jokes and a talking anime cat, but it exists solely as a tool for accessing a new level. Travis Strikes Back is a nice change of pace, but the stories it tells are just as nonsensical as the main game with the characters themselves often as shocked as you are that something happened which cannot be explained.

The thing is, there’s only so far that little references, in-jokes and nudge-nudge, wink-wink can get you, and as far as the bizarre framing of Travis Strikes Again’s story goes it is at least entertaining in how it embraces how weird it is. Outside of that, the game is a tedious slog through uninteresting environments. I really wish there was as much variation in the combat as there is with the penis jokes, but this is where we are, with Joy-Con in hand shaking it up and down like a teenager christening his new pin-up poster, and right now, that just isn’t enough.

Sound design is excellent
The boss fights are interesting

Not quite the glorious return we wanted for Travis Touchdown, for all of this game’s desire to be weird it does a better job of making itself uninteresting.