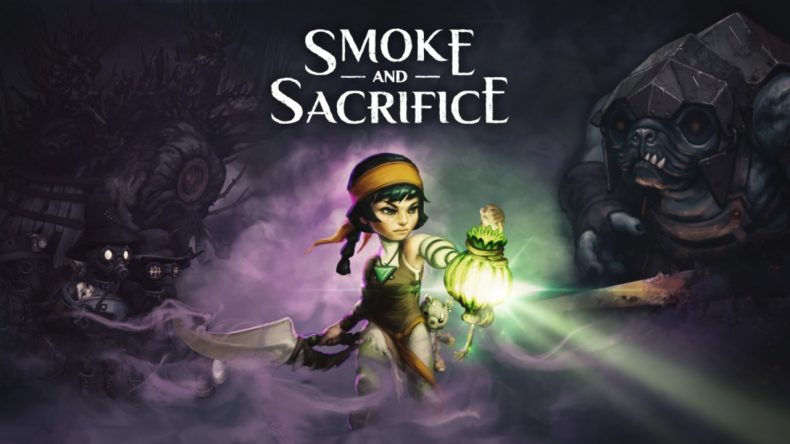 Smoke and Sacrifice starts with a deceptively peaceful introduction. Protagonist Sachi toils in a field along with the other people of her village, waiting for the whistle to blow and send her home. But you’ll soon learn that today is a special today, for Sachi’s son, Lio, has been chosen to help the village elders hold back the monster-haunted darkness that presses on their borders.

After collecting him from her home and making her way to the temple in the North of the village, you start to wonder why Sachi looks so glum despite everyone showering her with praise and congratulations. The truth is a sobering slap to the face, as you realise that in order to appease the gods who protect the village, Sachi’s infant son must be sacrificed.

Having to actually consign the poor little fella to the fire yourself is pretty damn cruel, but it’s not long before monsters storm the village and Sachi meets a mysterious tinkerer who reveals that all is not what it seems and Lio may still be alive. What follows is a survival game equal parts Don’t Starve and The Flame in the Flood, as you descend into the underworld below the village in search of the truth. Sachi is a resourceful sort, and can use what she finds in the world to fashion anything she needs.

If you think of the gathering and crafting of Klei’s seminal survival game, but flavour it with the morose tone of The Flame in the Flood, you’ll be somewhere near what Smoke and Sacrifice is. There’s no shelter-building to contend with, since Sachi is always on the move to some horrid place or another, but you will constantly need to top up your resources by gathering as much as you can carry. As in Don’t Starve, night time brings lethal terrors, as a dark smoke chokes the land and poisons all it touches. Your only hope is to stay in the light, and so you’ll need to have parts ready to craft lanterns when your magical, glowing pendant runs out of juice.

Cold areas require warm clothes, while anyone venturing into the wilds unarmed will be food for giant porcupines and gelatinous polyps. Death comes easy, and you can only restore lost health by eating, but in order to make food you’ll need ingredients and a cook pot, which are found around the world. You will also need to find workbenches to craft armour and tools, like a hammer to break rocks and a shovel to dig up the dirt. Everything is finite, nothing lasts forever, and one bad trip out from the safety of a save terminal can see you stranded, frantically trying to craft a replacement weapon from a tree branch and porcupine quills, or eating flowers for tiny, incremental heals. Pacing isn’t an issue, exactly, but I kept wanting Sachi to suddenly snap and tell the nearest gasmask-wearing villager to do one. Instead, she just plods on, menial task after menial task, occasionally proving herself to be the warrior everyone assumes she is.

At all times there’s a sense of danger and foreboding. The tone rarely lightens, and Sachi always looks either dangerously depressed or doggedly determined. That said, having a full inventory, a decent supply of curative and a few spare weapons is enough to give you the confidence to explore that little bit further. The map isn’t random, and areas are connected by travel tubes you’ll have to pay to unlock, and after a few hours you’ll have a few areas memorised as hotspots for certain resources – which is a good thing, because most of the quests amount to little more than busy-work. Kill this beast, trap this pest, fetch us rat meat, gather 6 mushrooms, you get the gist. It’s the only thing that really let’s Smoke and Sacrifice down, as the only way to get a lot of the recipes is to be everyone’s bitch when you’d rather be kicking down doors to find your little boy.

Smoke and Sacrifice looks stunning at times, with hand-drawn artwork that brings to life a world both beautiful and horrific. The enemy design is colourful and creepy, and even the NPCs on your side are weird looking enough to keep you on edge.

This genre has become more and more crowded in recent years thanks to titles like Don’t Starve and Crashlands, but it’s a testament to the developers involved that each game retains its own identity. Smoke and Sacrifice is no different, presenting an atmosphere and heroine that are never less than compelling in a setting that manages to be both unsettling and inviting at the same time. Uncovering all the secrets of Solar Sails Games’ dark and dreary world will take courage and determination, but it’s absolutely worth the work.

Combat isn't great
Some of the quests get a bit boring