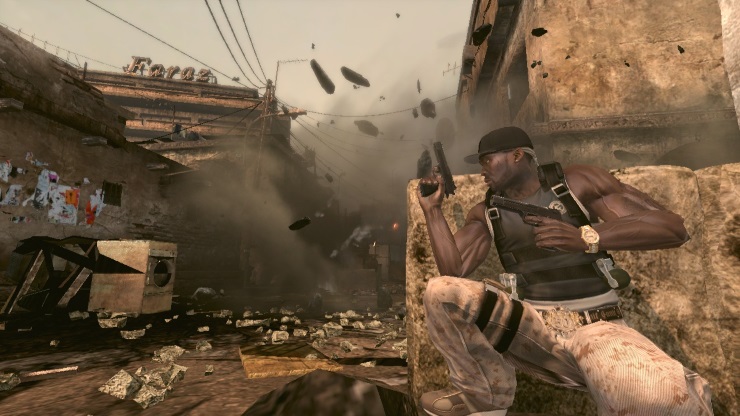 Sometimes, games are just plain bad. It’s unavoidable. They lack all charm, likability or anything resembling redeeming features. But sometimes, games are so bad they actually come out the other side and trick us into thinking they’re good, even if only for a short time. It’s not as rare as you think – there might be hundreds – but in the interest of brevity, here are ten of the best bad games out there.

50 Cent: Bulletproof, eh? Oof. That was a bad game. It was so bad, in fact, that no one expected a sequel to ever see the light of day. But Fitty himself, the irrepresable badass that he is, was not to be put off. He, along with his G-Unit crew, returned to the world of video games a few years later with Blood on the Sand, a story about a bunch of foul-mouthed sociopaths who go on a murderous, blood-fuelled rampage. And that’s the good guys. Blood on the Sand is stupid, loud, mildly directionless and utterly devoid of subtlety – and yet, oddly, it’s hugely enjoyable. It relies on swearing and helicopter battles way too much, but let’s be honest, those particular issues are the least of its problems. The epitome of a game that’s just bad enough to be good, 50 Cent: Blood on the Sand is at least worth a wet weekend in front of the 360 or PS3. Insomniac, the minds behind Ratchet and Clank, and… um… the other Ratchet and Clank games, first announced FUSE under the name Overstrike, a four-player co-op squad shooter with more than a faint whiff of OG Xbox classic Brute Force, and a fun, cartoony art style. Exactly what went wrong isn’t clear. FUSE should have been awesome: four governement-trained badasses on the hunt for a mysterious substance that could change the fate of the world sounds good on its own. Add in some outlandish weapons and a script that manages to be genuinely funny at times, and you should have a recipe for success – but, by and large, FUSE failed. If you’re a shooter fan who never played it, it’s well worth a bit of attention (and it’s under a tenner now, too), if only for one psychedelic, hallucinatory boss fight that makes the entire game seem worth it. Gears of War released to a hail of positivity, hype, general good-feeling and a slurry of cut-price copycats hell-bent on filling their brown and grey worlds with convenient waist-high walls, waist-high boulders, waist-high open car doors and waist-high bulletproof bushes. 2012’s Inversion took the concept of Gears of War wholesale: gruff hero and his Latin-American sidekick defend their world from lumbering alien brutes by running, bent-double, from cover-point to cover-point. Inversion, though, added a unique mechanic which, at the very least, let it stand apart from the herd: gravity control. Ignoring the two fairly blatant fingers it waved at the laws of physics, Inversion’s car-salesman-named hero cop Davis Russel cut an impressive upside-down figure as things like neon-signs and bolted-down chairs became cover-points instead of dustbins and car boots. Sadly, overuse of the clever mechanic was unavoidable, and the nonsensical plot and macho posturing didn’t help. Inversion is pretty crap, but unique, inoffensive and accidentally entertaining enough to be worth playing. Like Inversion, Fracture takes an established genre (in this case, big guys with guns shoot aliens with guns- wait, that sounds familiar…) and injects with a wholly unique concept that more or less works for some of most of the time. In the case of Fracture, it’s terrain reformation (no, seriously), with which you can, well, reform the terrain, creating jump points and sinkholes and all manner of other interesting landscape gardening features for use when pointing a gun and squeezing a trigger just ain’t getting shit done. In all fairness, Fracture is actually pretty decent, even if the terraforming never feels like much more than a gimmick and the rest of the gameplay is terribly pedestrian; at least it’s something fresh. It’s not quite a “guilty pleasure” game, but it’s pretty much OK. Rage is a weird one. Developed by id and published by Bethesda, the marketing and hype was geared to put you in mind of a kind of Doom/Fallout hybrid. Upon release however, what we got was a relatively hollow experience that attempted to dazzle us with its looks but fell flat everywhere else. In actual fact, even the ridiculously pretty visuals resulted in some appalling screen-tear and texture pop. So why does it deserve a place on this list? Mostly because it was a horribly straightforward affair that somehow managed to be likable. The fact that, a 100 years after the fall of the world, people who’ve lived in the same network of shanty towns all their lives are running around with Australian, American and Irish accents is concern enough, but there’s also the agonising emptiness of a game yearning for a leveling mechanic, a proper quest system, anything to make it not be just about failing to kill with point-blank headshots and driving around in sand. It’s a guilty pleasure game, that’s for sure. Narry! Forsooth! Verily! While the sequel went a long way towards making up for some of the original’s sins, nothing could excuse Two Worlds for the worst scriptwriting in the history of fantasy RPGs. A game stuffed full of content and ideas and things to do was rendered all but unplayable by a network of bugs and glitches, unwieldy controls, a meandering story and that terrible, terrible pigeon Shakespeare it kept spouting. And yet, despite its catalogue of shit, Two Worlds has become something of a cult hit since its original release. If you’ve got nothing else to play and you’re utterly, chew-your-own-arm-off desperate for a fantasy RPG to play, you can’t do a lot worse, but you might find yourself having fun with Two Worlds anyway. Replacing Two Worlds’ god-awful narrying and forsoothing with C-bombs and F-bombs, remarkably dull RPG Risen proved that developers Piranha Bytes have a bottomless chasm of ideas and inspiration, but nowhere near the budget or the bonce to bring it all to life. Risen 2 was no better, despite its pirate theme, and where the sequel is worthy of the hate directed against it (Piranha Bytes should have learned by now!), the original is just a hugely ambitious adventure whose reach exceeded its grasp. It’s not terribly awful: the unintentionally funny combat and awkwardly foul-mouthed script are worth a few hours, and the utterly dull personality vacuum that is the protagonist is so vanilla and generic he almost becomes endearing. Ignore the blatant face-slappery of retconning Hicks back to life (win) only to dismiss the reasons behind it completely (fail), ignore the fact that they reduced the lethally intelligent xenomorph to a zerging moron, ignore the fact that the very best part of the game is the first five minutes and it’s immediately crap from then on, and ignore the fact that the script still thinks its 1986, and Aliens: Colonial Marines is so laughably bad that it manages to become B-Movie enjoyable at times. And if nothing else, they nailed the sound of the M41-A Pulse Rifle, amirite? After spending almost a decade in development Hell, Duke Nukem Forever was eventually released, proving – along with the above game – that if Gearbox aren’t making Borderlands, they’re just making shit. Buggy, loud, crass, stupid, sexist, piggist and relentlessly behind the times, DNF is widely considered to be one of the very worst games of the last generation. But – bare with me here – it’s not really all that bad when you’re playing it. Yes, it’s ugly and dumb, but it’s absolutely stuffed with things to do. From such immense epicness as repeatedly flushing a turd to racing a shrunken Duke around a warzone in a toy car, Duke Nukem Forever at least keeps its content varied. Before Witcher 3: Wild Hunt, the only place to go for real-time beard growth was Access Games’ Deadly Premonition. A Twin Peaks-style paranormal mystery game, it casts you as Francis York Morgan, a detective on the trail of the elusive Raincoat Killer. Switching between the town of Greenvale and the ominmously-titled “Other World”, York investigates various murders connected to the killer while his own sanity slowly unravels. Unashamedly weird, Deadly Premonition is also ridiculously compelling, despite its mountain of flaws, and if you’re the sort who can be swept along by a powerful mystery then you’ll fall in love with it. Utterly bonkers at times, it polarised critics like no game before or since, and continues to enjoy a dedicated fan-base. Deadly Premonition might be the epitome of “so bad it’s good”.

Any we’ve missed? Any you don’t think should be featured here? Let us know in the comments section. As always, remember: if you’re nice to us, we’ll be nice to you.

Senior Content Editor Mick has been playing games for over 30 years and writing about them for around 12. After drifting from site to site for a while, settling briefly at the now-defunct Made2Game and freelancing for the gone-but-not-forgotten NintendoGamer Magazine, he came at last to rest at Godisageek. Mick has been a reviewer, staff writer and content editor here for some time, while also moonlighting a little for Red Bull Games. He has 4 kids, has written 2 novels, and sometimes even manages to pay a bill or two. You'll usually find him defending the galaxy in Destiny 2, battling evil in Diablo 3, or lurking in the background on Twitter. Find him there @Jedi_Beats_Tank, or on XBL (JediWaster247), PSN (Jedi_Waster) or Nintendo (JediWaster).
MORE LIKE THIS
Aliens: Colonial Marinesdeadly premonitionDuke Nukem ForeverFuse

Aliens: Colonial Marines Single Player DLC is on the Way