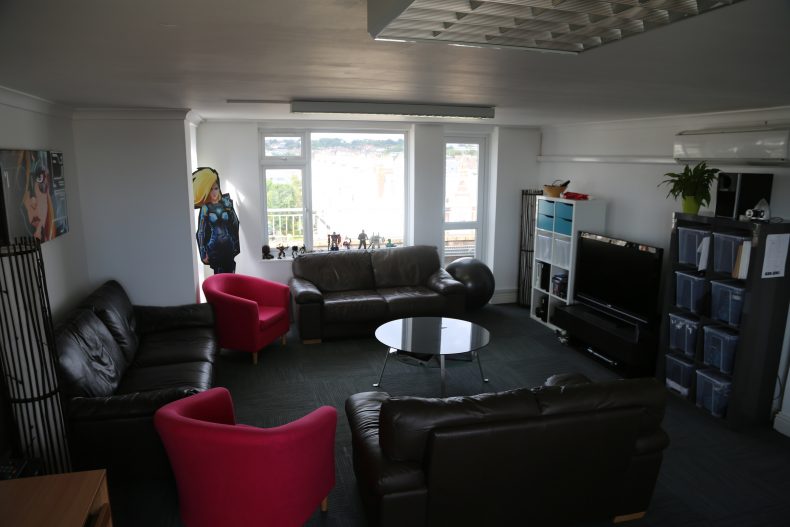 Velocity 2X hits the Switch in a few days after originally releasing on PS4 and PS Vita. I loved the game then and continue to enjoy replaying it. While my full review of the Switch port will arrive around launch, I spoke to James Marsden (Owner and Director at FuturLab) about the company’s history, starting out in game development, porting games, and more.

2018 will be FuturLab’s 15th Anniversary year. I asked James how he started the company and got into flash development. “It sounds a bit weird but FuturLab was founded as a by-product. Music is my first passion, but I’d only rediscovered this fact at age 22 whilst studying Fine Art at University. I knew that a career in music was probably out of my reach; I wouldn’t be able to compete with folks that had been practising their whole lives. This notion was compounded by the release of Napster: suddenly overnight, musicians would struggle to make a living from direct music sales, making an already tough industry even more so. My next thought was to make music for games – my second passion – but again, the musicians who would struggle to make a living directly from music sales would likely think the same; the competition for working as a musician in games would be that much hotter. That’s when I had the silly thought that if I started my own games company, nobody would be able to stop me from making music for the games…Whilst I never openly pursued that goal as it seemed a bit loopy, it obviously drove my decisions over time, because five years later I was running a Flash games company. I chose Flash because the barrier to entry was far lower than console, and I hoped to jump ladders over time.” Music also seems to have led to Velocity as a game existing. “Music was really what led to the inception of Velocity too, as I’d been working on a piece of music on and off for ten years, and in 2010 when we’d just finished Coconut Dodge, the music sounded like a heroic 80s space shooter. Robin (Jubber), the programmer responsible for Coconut Dodge said we could reuse the codebase from Coconut Dodge for a space shooter – so I said I’ve got a tune for that!”

FuturLab has done multiplatform games but for the most part, it has been doing stuff with and for Sony before anyone else. I asked how they got in touch with Sony and how things progressed. “By 2006 I’d had enough of the Flash projects we were working on as they were so creatively shallow, so set about learning how to make a proper platform game. Driven by ideas I’d had at University, I spent about three months working around the clock to make a game I’d be proud of. I showed it to one of our clients who had done work with Sony in the past, and he made an introduction to David Amor at Relentless Software (makers of Buzz! on PS2 and PS3). David was interested in helping out, so he gave us the number of the right person to speak to at Sony. You can read about the pitch that resulted from that here.” FuturLab games have appeared on multiple platforms so I asked how it has been working on various portable and non portable platforms a few years ago and now. James also commented on the Switch hardware and Nintendo. “Honestly we’re not very exposed to portable development at the moment. Andy Yelland is the chap who created the Velocity 2X engine, and he has always worked with us as an external contractor. Andy produced the port to Switch, with us doing minimal play testing once his work was nearly complete. We needed to make some adjustments, shuffling the control scheme around to better fit Nintendo’s platform conventions (B being the most often used button as opposed to X on PlayStation for example), but otherwise we’ve just been in awe of the hardware. I’ll be honest and say that whilst I’ve always loved Nintendo’s games, this is the first time I’ve really found their hardware desirable from a product design point of view – I think Switch is absolutely beautiful as a piece of design.”

Velocity 2X is a super fluid experience on every platform and quite the departure from the original Velocity. I asked how they approached the sequel and what they wanted changed from the original. James commented on how some things could’ve been possible with the first Velocity. “The idea of getting out of your ship was actually there during the development of the first Velocity. Our ambitions were high, but we weren’t able to find a publisher to support that vision, so we self published it on PS Minis without the platforming aspect. We always thought the game deserved a bigger platform than PS Minis, but we decided if we can’t get funding for realising its full potential, then we’ll just make the best game on PS Minis – which we arguably did. Once Velocity became critically highly successful, we were approached by Sony to ask what we wanted to do for a sequel, and before I had the chance to finish my description of wanting to get out the ship to run around and do the same sort of action on foot, I was told the deal was agreed in principle. It was exhilarating and more than a little reassuring that we were onto a good thing.” Velocity 2X was ported on PC after PlayStation platforms and the experience was not great thanks to a Windows 10 and NVidia bug. “Initially the port was straightforward, but then we released into the launch of Windows 10 which exposed a game-breaking bug for NVidia cards that took us a year to fix. Obviously this still stings us looking back, but I take pride in the fact that we did *actually* fix it. We persevere! You can read all about that bug here if you’re interested.”

Nintendo Switch is the new hotness for every indie developer with games doing better on Switch than other platforms and in many cases more than all other platforms combined. My list of indie games I’d like to see on Switch grows shorter with each passing day and Velocity 2X is something I wanted but didn’t think would happen. It is FuturLab’s first release on a Nintendo platform so I asked how the porting process was. The port was done by Curve Digital. ” It was largely straightforward, though it always takes a while to learn a new platform in terms of the release process. Fortunately Curve took over and have dealt with the submission process, which has been greatly appreciated.”

Readers of my Re:Port Review series will know I care a great deal about games using Switch specific features like HD Rumble and Touch well. James discussed those aspects and one feature both he and I love about using split Joy-Cons. “We use HD Rumble and the touchscreen, yes, but actually I think the best addition to the Velocity 2X experience that comes from Switch has nothing to do with us – simply being able to detach the JoyCon controllers means that the high input intensity experience becomes very comfortable. There’s no ‘claw-hand’ cramp when you can rest your elbows anywhere you like with wrists at any angle. The hardware itself just melts away, and since Velocity 2X is all about achieving flow, this hardware feature of detachable controllers really elevates that experience of being at one with the game.” Velocity 2X’s soundtrack is kickass and was done by Joris de Man who also did the superlative soundtrack for Horizon Zero Dawn. James commented on how it has been working with him. “A total joy. He’s so talented, patient, understanding and super enthusiastic about everything he works on. He’s just a lovely chap who I’m now proud to call a friend.”

An indie game I love coming to Switch means I need a physical release and it looks like Curve Digital will have to decide on one for this game. James also said he wants to revisit Surge Deluxe in the future. Before wrapping up, I asked him about the ketchup at the FuturLab office because it is a tradition here. “It is in the fridge, but it’s far less important to me than the Encona Hot Pepper Sauce. We have one bottle in the fridge and one bottle in the cupboard. Because.”