It was hard to see where the Saints Row franchise would go after the insanity that was Saints Row 4. With superpowers and aliens now introduced into a game that started as a GTA clone, Volition really had their work cut out to expand their series. It seems they’ve taken the sensible option and just rebooted the franchise, and from what I got to see of it in a recent hands off preview fans should be getting excited.

When four friends are struggling to make their rent payments, they decide to turn to crime to make up the difference. One chaotic but successful robbery of a payday loan company later, and The Saints are born. Saints Row is the origin story of everyone’s favourite gang, and will see you building your criminal empire into the toughest group in town. 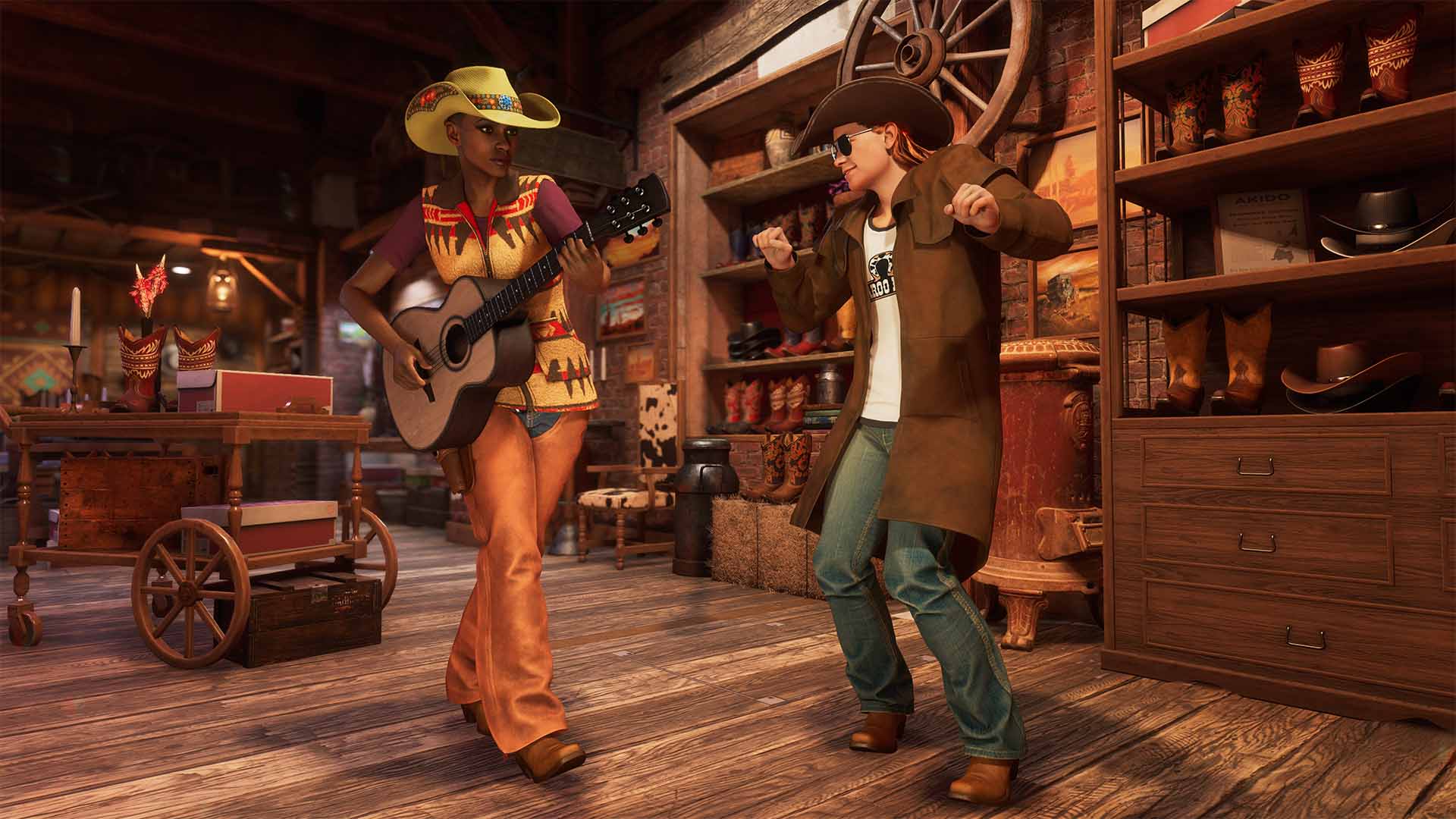 Volition were keen to show off the customisation at this preview event, because they want you to feel some real ownership over your gang and characters. The options looked absolutely phenomenal, with plenty of wacky clothing to choose from, completely customisable gender characteristics, and options for prosthetics. As well as the main characters, you can design your standard gang members, the guns your gang will use (with a ridiculous amount of custom paint jobs available) and the cars they’ll drive. You can even change how your character looks on the fly, and essentially play as a different character in each scene if you fancy. You have full control of how you look, story continuity be damned.

The gameplay in Saints Row looks to be much more akin to Saints Row 2 and 3, with plenty of driving around the city required to get from mission to mission. The world is packed with things to do, from random opportunities like an armoured van full of cash to repeatable Side Hustles.

The Side Hustle we got to see was unfortunately a little tame by Saints Row standards, and involved shooting enemies from a car passenger seat. There was the option to climb on the roof so you could attack from all angles though, which came at the price of being more exposed to bullets. 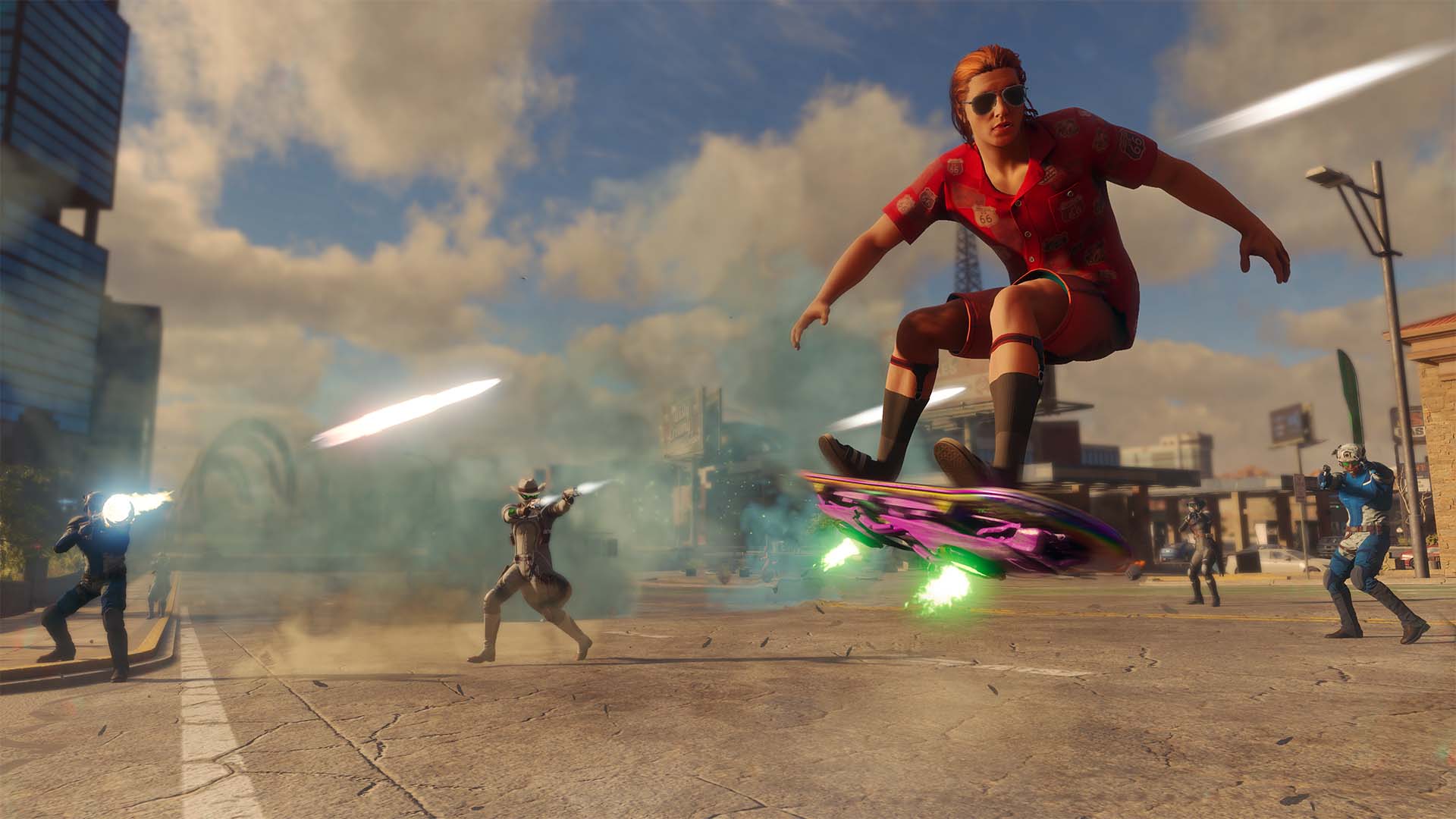 Thankfully alongside a few fairly uninspired mission sections, we also got to see plenty of the glorious Saints Row stupidity we all know and love. Weapons like the Pinata Launcher and the Thrustbuster (a projectile you throw which launches whatever you hit skywards) are there to provide some giggles while causing mayhem, and then there’s the wingsuit.

The absolute highlight of the event was this phenomenal way to travel the desert town. How is the wingsuit different to other games I hear you ask, well to get more air at any time you can swoop down and Goomba stomp any unlucky pedestrians for an altitude boost. I can’t think of a better way to get from point A to point B, and I’m looking forward to wasting hours gliding around and stomping fools when Saints Row launches.

Saints Row isn’t all just dumb fun though, and Volition showed off a plethora of deeper systems to get into on your way to gang domination. You can equip four skills at any time to boost your arsenal, resist certain types of damage or just gain a powerful new ability like the Fire Punch or Pineapple Express (which sees you stick a grenade on a fool and throw them at other fools). There’s also gun upgrades to unlock, as well as extra silly cosmetics you’ll collect by beating all manner of missions. 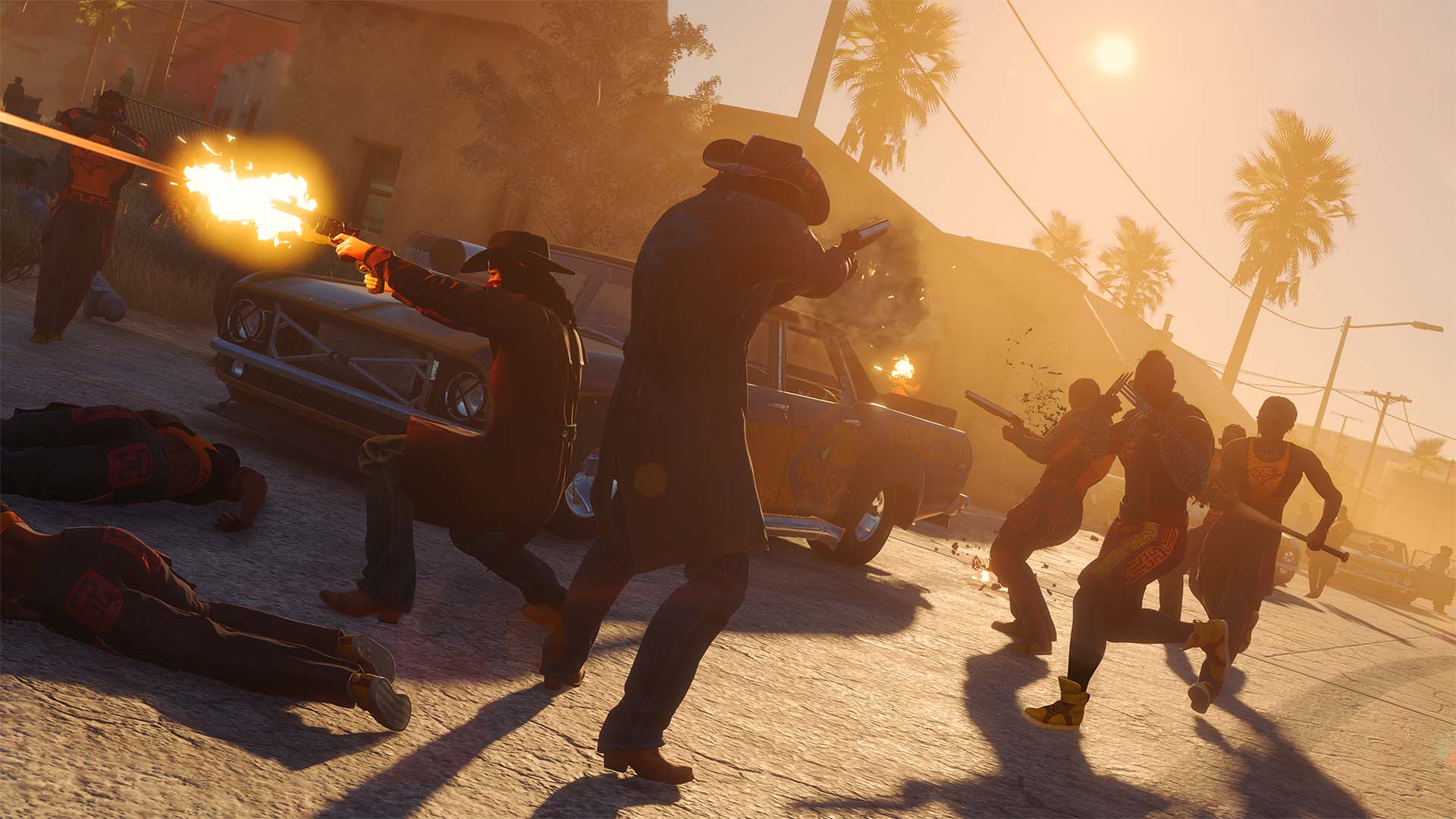 Some side missions and side hustles only unlock when you invest in criminal ventures. Maybe you want to buy an army surplus store so you can do a bit of arms smuggling on the side, which will unlock mayhem gameplay for you to “advertise” your products. If you really want an open world game to sink your teeth into, Saints Row has got you covered.

If I’m going to play an outrageous open world game I’d always prefer to do it with friends, and Saints Row allows that thanks to the drop in untethered co-op. The entire game can be played with a buddy, allowing you to do all sorts of crazy team stunts like picking up someone’s car with a helicopter equipped with a massive magnet. Any missions you beat in someone else’s game will be skippable in your own world too, so you don’t have to worry about repeating anything alone later.

Saints Row looks like it’ll be a great combination of Saints Row 2 and 3, with plenty of the wacky and wonderful elements that fans of the series will expect. If later missions and side hustles are a little more bombastic I think this franchise reboot will go down well, and I can’t wait to make my glorious pink and yellow army the biggest gang in town.