previous
Stranger of Paradise: Final Fantasy Origin gets its first expansion
random
next
OlliOlli World and Oxenfree are having a crossover
0 comments 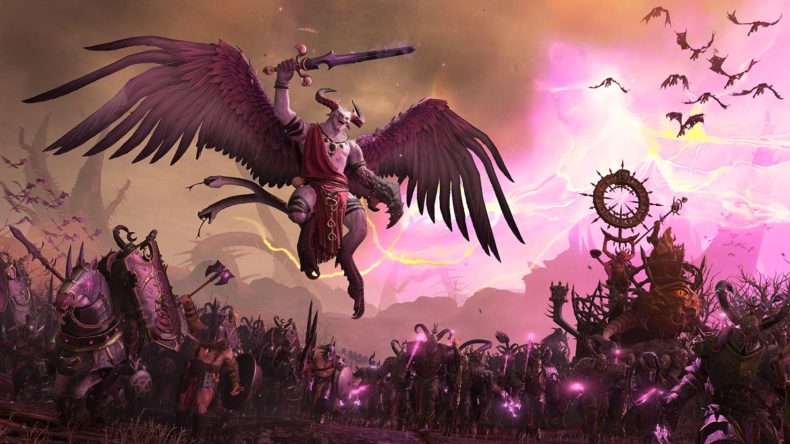 SEGA has today announced that Champions of Chaos, the newest DLC for Total War: Warhammer III, will release on August 23. It will include four new Warriors of Chaos Legendary Lords instead of the usual two, each aligned with one of the four Chaos Gods. Also included are new gameplay mechanics, fifty new battlefield units, and more.

One of the four new Gods has been revealed as Azazel, the Prince of Damnation. This dark God has been the bane of humanity since time immemorial, with constant acts of devotion and debauchery assuring his high standing in the eyes of Slaanesh, the Chaos God of excess and hedonism.

A new campaign experience will be available when the DLC releases, taking place in the ancient city of Zanbaijin. Players will have to earn the gaze of their master through bloodshed and ritual before taking the arcane power as their own. Fifty new units will be coming to Total War: Warhammer III by way of the Champions of Chaos DLC, including the Warshrine of Chaos who bestow terrible gifts upon those who make the appropriate sacrifice. Chaos Knights attack enemies in a wall of blades and spiked armour, crashing through enemies and ripping them to pieces, and the Chosen, a group of elite slaughterers who form the inner circle of their lord’s warband.

There’s also a selection of free content on the way as well. Immortal Empires is a new grand-scale campaign mode which is free to those who own all three Total War: Warhammer titles. It combines landmasses, Legendary Lords, war units, and more from the entire trilogy into one massive game mode spread across the Warhammer world.

Finally, a new effects pack called ‘Blood For The Blood God III’ will release, including several mature-rated animations like blood spurts, limb and head dismemberment, blood-drenched UI elements, and global campaign events that generate more carnage on the battlefield. It will be free to anyone who owns Blood for the Blood God I or II.

Video games are cool. Don't let anybody tell you any different.
MORE LIKE THIS
Segatotal war: warhammer III