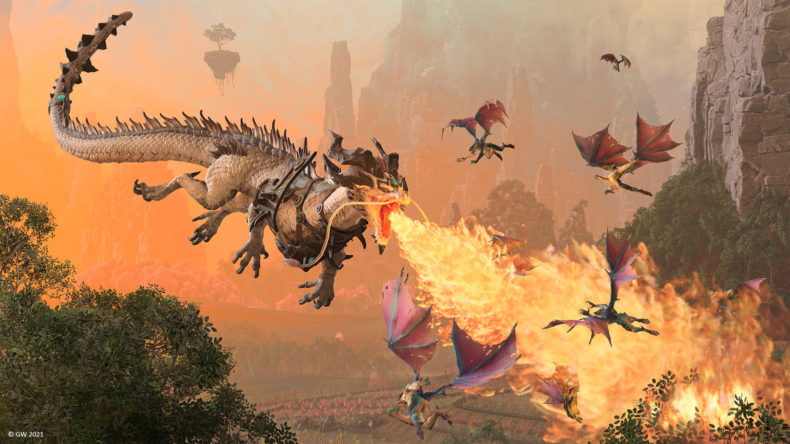 Total War: Warhammer III, as the name suggests, is the third in Creative Assembly’s Warhammer trilogy. It heads back to the Old World and the Realms of Chaos with an original campaign story and a host of new features and armies.

The Total War series is known for creating so-called armchair generals. It’s an incredibly deep, massively tactical franchise that puts the player in command of not just huge armies but also the factions those armies protect. While projects like The Three Kingdoms and Troy are grounded in the real world to an extent (though still feature their share of the fantastical), the Warhammer tangent of Total War takes the action to the setting of Games Workshop’s legendary conflicts.

There are 8 factions right out of the gate, and only two of them are human. The bear-worshipping Kislevites, grotesque Ogre, and China-themed Cathay nations represent the mortals of Warhammer’s world, while the other factions are all deamonic. From the primary campaign that centres around the rise of a Daemon Prince to the armies of the four prime Chaos Gods; Khorne, Tzeentch, Nurgle, and Slaanesh. 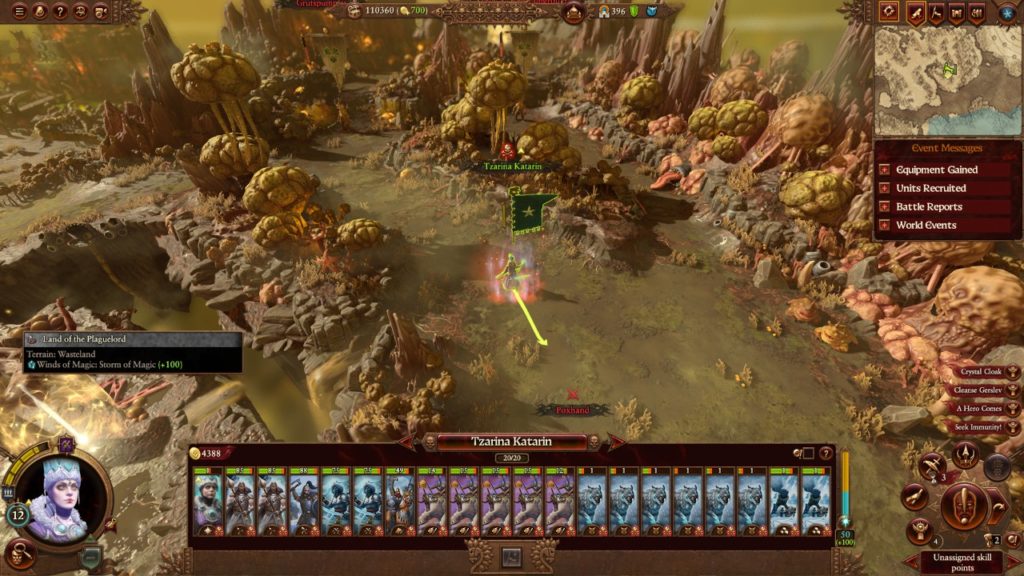 It’s in service to the over-arching story. As detailed in the expansive Prologue campaign, a Kislevite Prince sets out to save Ursun, the Bear-God worshiped by Kislev. When he falls from grace and makes a pact with the forces of Chaos, he initiates a dimensional conflict over the blood of the stricken Bear-God. It’s this conflict that drives the narrative here.

As you maneuver your armies around the map, Ursun will periodically roar. This creates rifts, through which you can take your armies into the Chaos Realm. The goal is to secure the souls of four Daemon Princes, with which to challenge Ursun’s tormentor for the dying God’s power. The ever-suspect Advisor makes a return, driving each campaign towards his own selfish end.

It’s a solid narrative, and does a great job of presenting each faction with a common goal. A campaign will typically last up to 150 turns, and can be won either by completing the main objective or dominating the other factions in both open warfare and diplomatic relations. 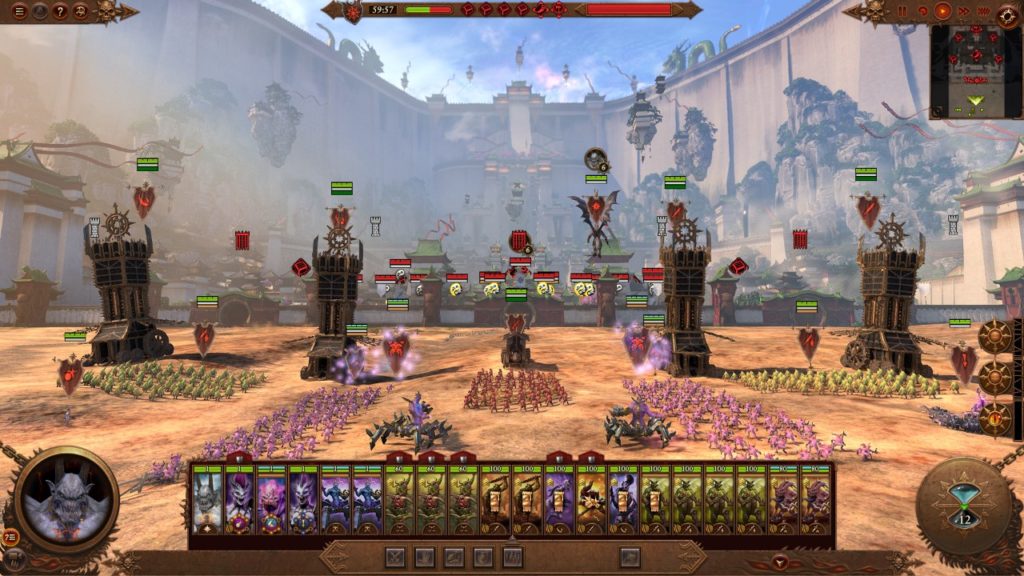 Total War: Warhammer III’s greatest strength lies in the diversity of the 8 factions. Each follows the same overall path, but the variety of units, mechanics, and tactics is incredibly impressive. For example, the nation of Cathay must focus on Harmony. It’s essential to maintain a delicate balance between Yin and Yang, while using a magical compass to drive the Winds of Magic to bolster defence, growth, or power. On the flip side, the daemonic forces of Slaanesh are able to seduce and manipulate other factions, even causing entire units to switch sides during a battle.

Your time will be spent exploring the map, dealing with quickfire objectives and attempting to subjugate or destroy your enemies. There’s an emphasis on diplomacy, with options to treatise and ally with other factions, or join their conflicts to bolster both your nations. Or, of course, you can build up your strongholds, invade enemy cities and amass a mighty empire forged in war and bloodshed.

There’s a great balance to Total War: Warhammer III that comes, in part, from Creative Assembly being so confident of their abilities. They know their brand and their audience, and it shows. You’ll spend as much time working the conflict from behind the scenes as you will commanding your armies across vast battlefields. And yet you’ll never feel less than fully engaged with proceedings. 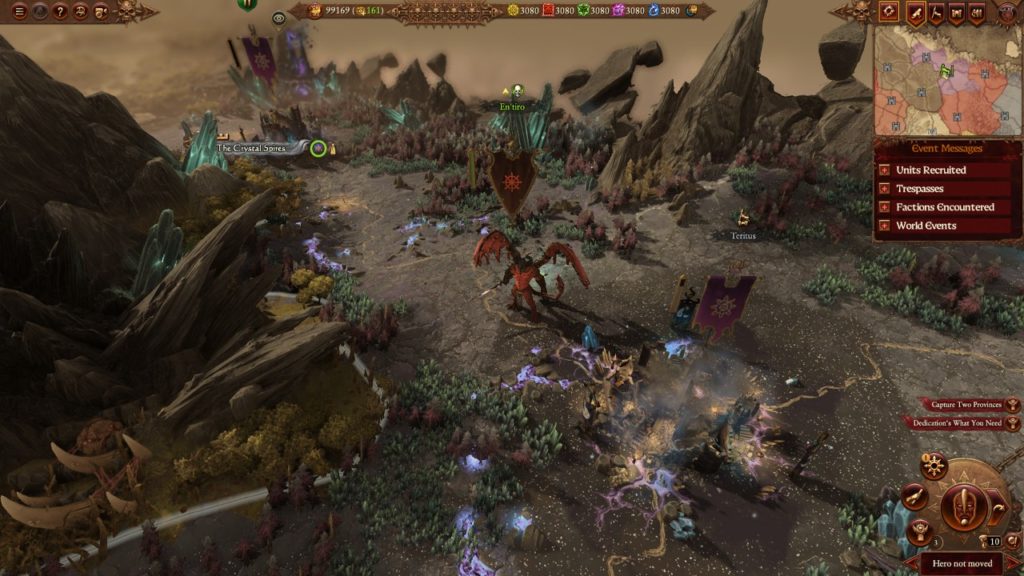 It’s good to be bad

One thing that makes the Warhammer games stand out from offerings like Troy and Rome is the unit diversity. The Warhammer universe is incredibly vast and imaginative, and allows for all manner of creative units. From dragons and towering Chaos beasts, to bear-riding cavalry and ballistic airships – being able to field such interesting and unique units keeps it feeling fresh and fun.

If anything, the biggest issue is that there’s just so much to learn. Not for nothing, the Prologue campaign deep dives into every aspect of the Total War experience. It tutorialises everything – and yet even the Prologue Campaign is tough. I made a few bad decisions and reached an impassable situation, wherein I simply couldn’t continue without losing my entire army and starting from scratch. In the Prologue.

But this was on me. I rushed for an easy victory that left me under-prepared for one of the critical path quest battles. I succeeded, but at the cost of almost my entire army and one of my Heroes. When I then found myself caught between two full-strength enemy forces, I could do nothing. Total War: Warhammer III will punish impulsiveness and indecisiveness at every turn. Newcomers will no doubt struggle to get to grips with the array of systems, mechanics and units, but perseverance will bring understanding.

Social players will be pleased to know that the multiplayer element has been massively overhauled. You can now take part in an 8-player version of the story campaign, each controlling a different faction. And to speed up proceedings, players can take turns simultaneously, adding deeper realism and reactivity. Other campaigns can be played with 3 or 6 players, and there are various modes such as Survival and Domination that return from previous entries.

Battles play out in real time as you direct your units across the field. You can take advantage of cover, set up ambushes, position your ranged units on the high ground. Your Lords and Heroes have unique abilities, and the Winds of Magic can be manipulated to unleash devastating spells. While you can skip lesser battles for the sake of brevity, there’s nothing like watching two huge forces clash on a snowy battlefield. Total War: Warhammer III excels in these moments, where armies smash together in bloody combat to decide the fate of nations.

Creative Assembly have once more proved how well they understand this genre. As more nations are added as DLC (notably, a few factions, like the High Elves, feature only as enemies at the moment), it’s only going to get bigger and brighter. Even on easy, this is a challenging game that forces you to think, plan, and take measured risks to achieve victory. Quite simply, Total War: Warhammer III is a confident and inventive experience developed by the proven masters of large scale strategy.