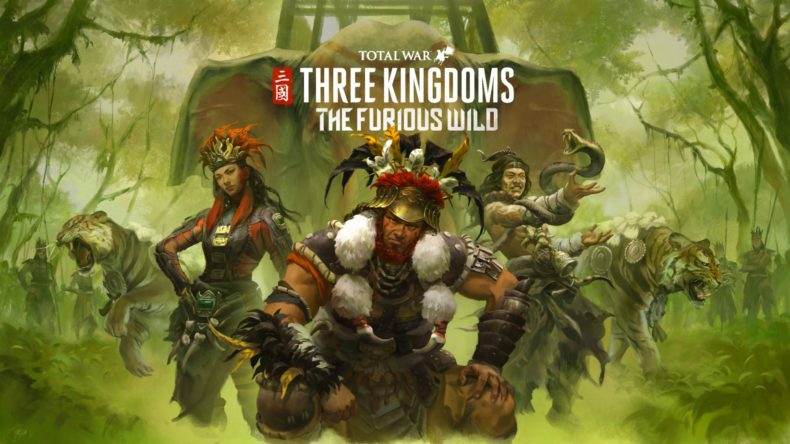 Up until now, each DLC for Total War: Three Kingdoms has, despite their differences, followed a very similar path. Each one provides additional characters and perspectives to play out the ever intertwined Three Kingdoms conflict of ancient China. But for the first time, courtesy of The Furious Wild DLC we find ourselves shifting focus away from the conflicts many have played out before. This time our attention shifts Southwest, to the jungle regions of the Nanman tribes, whose lives have remained largely unchanged from the conflicts going on elsewhere. The mandate is on local domination and unification, rather than the broader machinations of the whole country. And that makes The Furious Wild either incredibly refreshing or rather trivial, depending on your perspective.

From the opening cinematic, it’s clear this DLC is much more exotic than what has gone before. Your heroes don intricate headdresses, more rugged clothing, and jewellery from the bones of long-dead animals. As generals, they command not only swathes of humans but are also at one with the animal kingdom too. Tigers and elephants join the ranks providing a ferocity and awesome strength that puts fears into your foes. And human enemies now wield fire and poison weapons too which can turn the tide of battle in new and different ways. It certainly sets the scene as a more colourful and aggressive setup, luring you into its unique ideas. 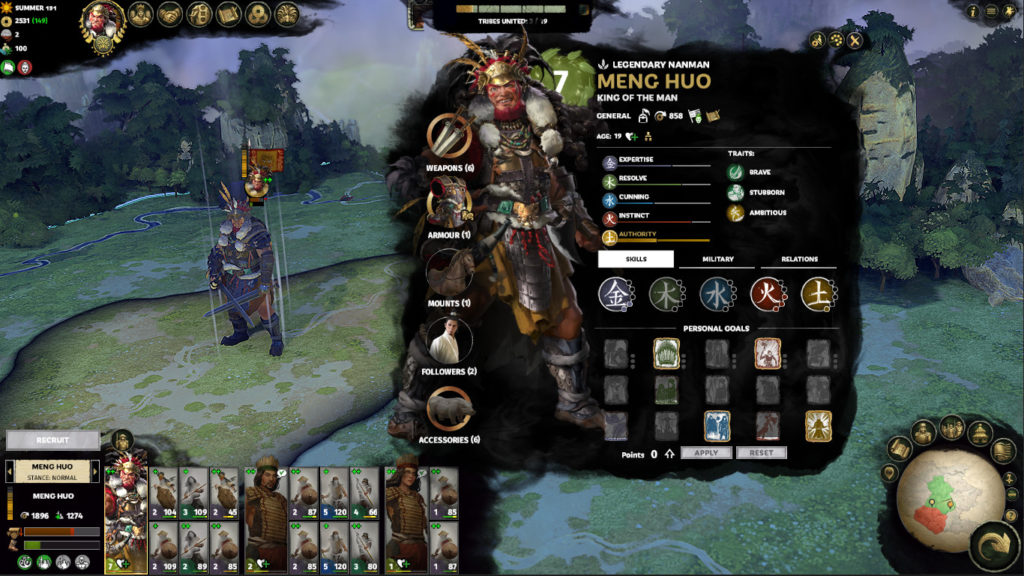 And that new roster certainly adds a certain panache to the battles this time around. Whilst the core battling remains unchanged from the main game, the new certainly spice things up. Generals charging into the thick of it on elephants, surrounded by tiger warriors or poison dart wielding battalions never gets old. It certainly makes a refreshing change from the standard, melee, ranged and cavalry units from the main game. And if you weren’t a fan of messing about and zooming into your battles before now, there’s never been a better time.

There are four different starting heroes to play as, each with their own faction. They genuinely feel different to play as you look to expand your influence. Meng Huo for example thrives on battle and success and so he gets temporary bonuses for conquering lands. These buffs stack as well, so it rewards the momentum of a continued assault. As such your focus is on where best to attack next without stretching yourself too thin or leaving yourself vulnerable. Lady Zhurong on the other hand can be more measured in her attacks, as over time the fire within her grows and you can then invoke her Wild Fire bonus making her army incredibly powerful. But there are tactics involved here too as the bonus changes depending on which season it is activated, and there is a cooldown period when she is vulnerable. It means depending on who you play as, you’ll play differently to maximise your advantage. 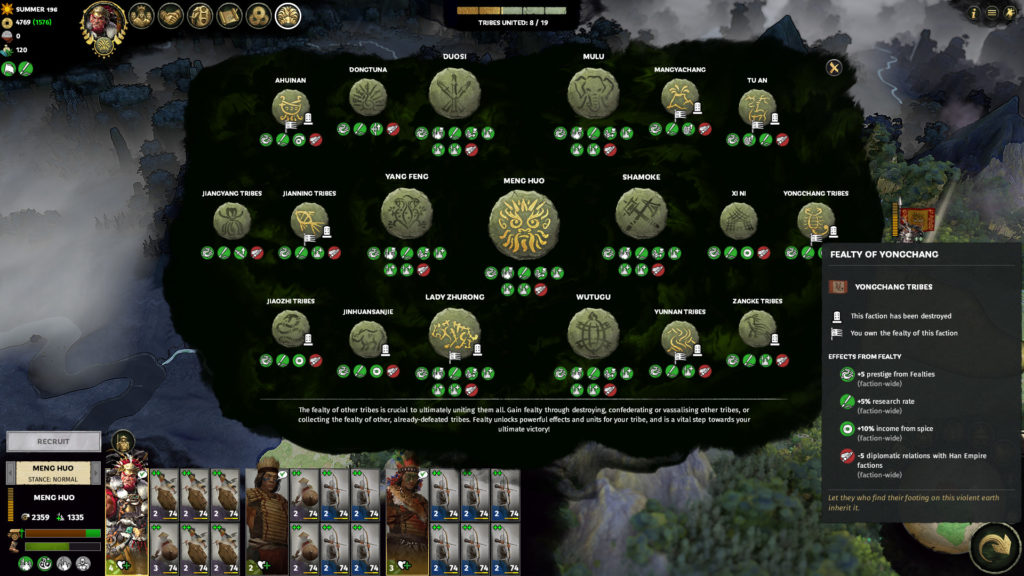 Despite the difference in how the heroes play, each has the same ultimate goal for victory. The Nanman have been largely shut off from the goings-on of the wider Three Kingdoms conflict, but that hasn’t stopped their own internal politics. As such, before anything else can be considered, the unification of the Nanman people is your priority. Whether you achieve the alignment of all 19 tribes through force or diplomacy, you will need to plan and grow carefully. As you bring more tribes to your cause you gain additional bonuses based on that tribe. It means you feel like you’re not just progressing on the map, but also physically becoming a stronger force too.

The crux of the matter though, and that will likely divide many is that this conquest feels very separate. As before, at the end of each turn, each other faction plots their next moves, sometimes attacking, declaring war, or signing peace treaties with each other. Before now it mattered, but despite all the diplomatic updates being thrown at you it’s hard to care, because ultimately unless the faction in question happens to be on your doorstep, it’s largely inconsequential. You’ll find yourself skim-reading at best what’s happening before continuing your focus on the part of the map that matters. It feels like the bigger battles are happening without you, because, frankly, they are. In Furious Wild, The Three Kingdoms era is almost passing you by.

But, Furious Wild comes into its own when it’s viewed as a standalone experience. If you put to one side what’s happening elsewhere, the new ideas and delicate diplomatic decisions required to succeed shine through. The brand-new Nanman-specific upgrade tree for example is split into three sections and requires you to complete mini-missions to unlock later branches. There are also decisions to be made here too, often between a traditional Nanman option or a more modern technological approach. Choosing one locks the other out forever, which can mean certain units or buildings can never be built. Choosing your next upgrade in Three Kingdoms has never felt so considered as it does in Furious Wild. 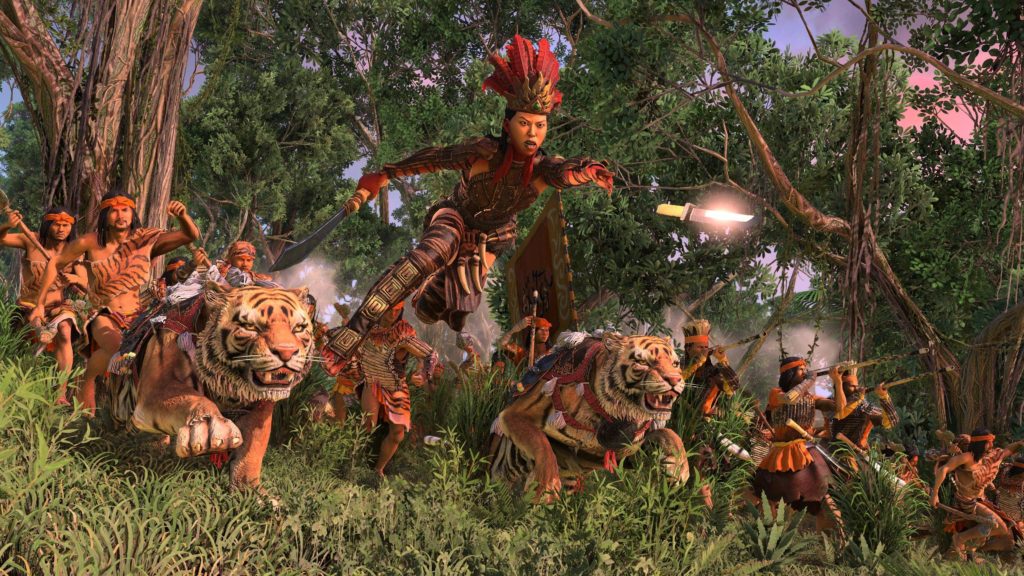 Generals themselves also grow and advance in different ways, with you choosing which of the five main attributes to boost up after they have gained a level. Specific skills are not unlocked with leveling up this time, more through accomplishing feats on the battlefield. You can also pin and track your progress against these to keep on top of how your favourite general is doing.

As a piece of DLC for Total War: Three Kingdoms, The Furious Wild will delight many but perhaps disappoint some too. With its focus being on a specific, previously unexplored area of the map, it struggles to embrace the wider conflict occurring across China. Even the eventual win condition of controlling additional areas outside of Nanman feels like an afterthought.

However, by being a controlled, contained experience, it actually manages to achieve what no other Three Kingdoms DLC has managed up until this point, in that it feels like Total War: Three Kingdoms did originally. You’re rediscovering the magic of new characters jockeying for position, the thrill of the battlefield, and the machinations of your tribal court all over again. Each tribe has purpose and strategies, and it’s up to you to figure out how best to manipulate them to your advantage. Yes, it’s smaller in scale than the full game, of course, but it more than makes up for it with its new ideas and bags of exotic character. For those having spent countless hours already in Three Kingdoms’ rich strategic world, Furious Wild is exactly the exciting jolt you need to jump in once more.

With exotic locales and new ideas, The Furious Wild DLC reminds us why we fell in love with Total War: Three Kingdoms in the first place.