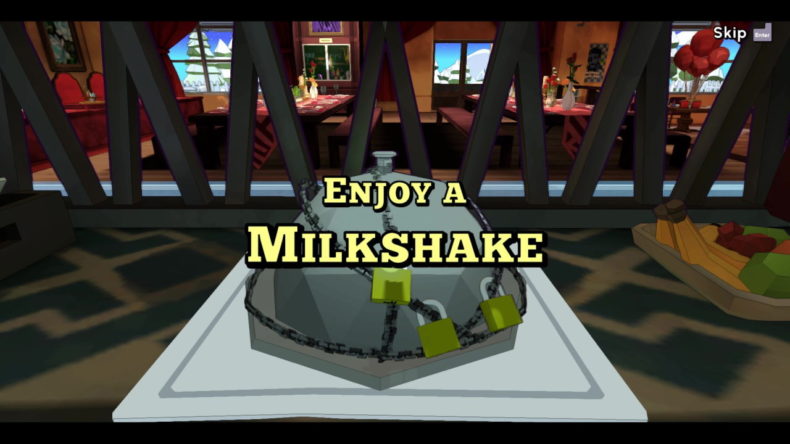 Trial by Taste is the seventh escape room in Escape Academy by Coin Crew Games, and here is our walkthrough to help you through every step:

The first thing we want to do is unlock that tasty Serving Dish in front of us. For that, we’ll need to unlock three locks. But instead of keys, we’ll actually need Forks. Yes, Strange Forks.

Move towards Jeb and to his right, you’ll see a conveyor belt. Wait there until a dish comes around with a fork with it on the plate. As it does inspect the dish and grab the first Strange Fork.

Now go back to the Serving Dish and look to the left. You will see the Dish Bin, and inside it is the second Serving Fork.

Now turn around to your left and look at the wall. You should see a white sign next to the window called:

A piece of this information will come in handy in a second. Whilst we are here, grab the Fire Extinguisher from the wall next to the poster before you leave.

Now turn around and head back towards Jeb, specifically the microwave to his left. If you inspect the microwave, you’ll see a Strange Fork inside it stuck in some meat. Based on the Forbidden Knowledge, this means the timer needs to be set to:

Doing so will cook the meat, but also make the Strange Fork start a small fire. Luckily you brought that Fire Extinguisher eh? Use it cool things down and grab the last Strange Fork.

Now you can return to the Serving Dish and unlock it. Each padlock has a specifically shaped lock that will match the prongs of one of the Strange Forks, so use the correct one for each lock.

Once it is opened, you will have your milkshake. Bottoms up!

Oh no, you’ve been poisoned! We’d better act quickly so nothing nasty happens to you.

Firstly you’ll want to investigate the toaster which is on the central island. Interacting with it will cause various bread products to fly out of it and land on the side. Inspect these to see the code:

Now head over to the freezer door (Jeb was in front of this previously) and use the above code on the door lock to unlock it. Once you’ve done that head inside.

When inside, turn left towards the end of the room. Ignore the big poster in front of you for now, we will be back for that later. Look to your right and pick up the Kitchen Knife from the meat. We’ll use this later.

Now turnaround and inspect the box of cube shapes on the bottom shelf. You can pick one of them up to find the Ice Cube (with Key).

Exit the freezer, and head straight forward to the hob on your left. You’ll see a frying pan with hot sauce in it. Use the Ice Cube (with Key) in it, and the ice will melt and you’ll be left with a Small Key.

Get the Antidote Recipe

There are lots to explore and inspect here, but the first thing you’ll want to do is head to your right, down the steps, and move towards the fireplace in front of you. Get close to it and use your Fire Extinguisher on it to reveal the Dirty Plate.

We now need to backtrack back into the kitchen to wash it. Head back there, and look for the sink on the middle island (it’s close to the microwave). When there interact with it, to turn on the tap and fill the sink with water.

Now use your Dirty Plate in the sink of water to reveal the Cryptic Plate.

Take your Cryptic Plate back out into the Dining Hall, but this time head straight, and then on your left on a table will be a lazy Susan. If you View (and maybe Pin if you need) your Cryptic Plate, you’ll see that you need to spin the Lazy Susan a certain amount in different directions.

Essentially you need to spin it:

If you do that correctly, the lazy Susan will rise up, revealing an Antidote Recipe underneath. Grab it.

Figure out your poison

“The Solange
One dash of what poisoned ye
Three dashes of the opposite
Splash of mineral water
Shaken, not stirred”

The problem is we don’t know enough about what poisoned us yet. But we will.

Head down the steps of the Dining Hall towards the fireplace and look to your left. You should see a birthday cake there. Take your Kitchen Knife we picked up earlier and cut it. It reveals a cake of four layers. Note down the colours:

Now if you look to the left of the cake, you’ll see a present, which just so happens to have a lock on it needing four colours to unlock. Put in the following code:

“Calabar causes yellow tinted vision, stomach grumbles and death.
Belladonna cause purple-tinted vision, audible heartbeat and death.
But when combined in the correct ratio, they make an antidote!
Weird, huh?”

So from that, we can deduce we have been poisoned by Belladonna and we need it and Calabar for an antidote.

Now go to the complete opposite end of the Dining Hall to the fireplace, behind the table with the lazy Susan. You’ll see there is a blackboard with the following on it:

If you interact with the board, it will swing aside, and reveal a console with four buttons on it. But we don’t quite know the code yet.

Now we need to return to the freezer and look at that poster I said we’d be looking at earlier. The big poster on the wall reads:

But crucially it splits different foods into different areas of the triangle. Remember we had the following food on the blackboard:

Now if you spot their placement in the triangle (either top, left, right, or bottom), we can see that each of those foods is in the following locations:

This gives us the code back at the blackboard of:

Putting that code into the machine behind the blackboard will reveal a little cubby hole you can crawl into which is actually a dumbwaiter. Once inside, look to your left, and pull the switch. You will descend to the floor below where Jeb and Eel are talking about your poisoning. Grab the Skeleton Key whilst they are nattering, and then pull the switch again to return to the Dining Hall.

Now it’s time to mix that antidote and cure our poison. Exit the dumbwaiter, and head to the left-hand side of the middle of the Dining Hall. Here you should see the drinks cabinet that you can unlock with the Skeleton Key.

At this point, I would encourage you to memorise the Antidote Recipe again (or have a co-op partner have it to hand). As a reminder it is:

“The Solange
One dash of what poisoned ye
Three dashes of the opposite
Splash of mineral water
Shaken, not stirred”

Now we know we were poisoned with Belladonna, and the opposite is Calibar. As such to mix the drink you need to:

Then finally you can drink the antidote, and you are cured, and the escape room is complete.

NEXT: THE TEA KETTLE WALKTHROUGH