previous
3 Instagram Mistakes & How To Avoid Them : Useful Tips For Beginners
random
next
Krafton reveals visual concept for The Bird That Drinks Tears project
0 comments 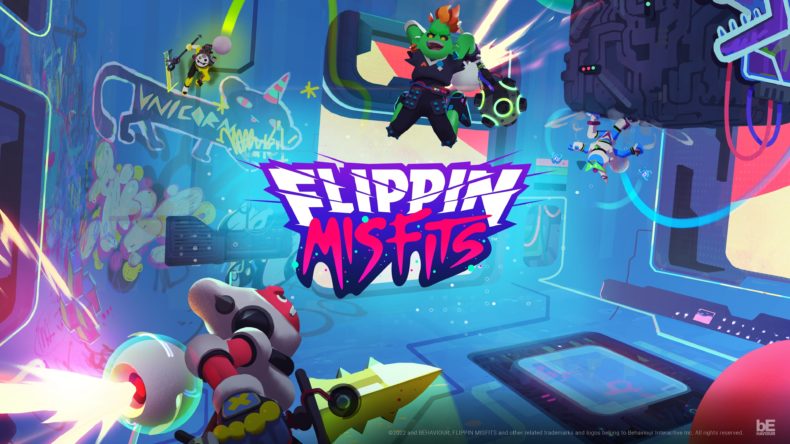 It sounds very basic, but more than anything else I want to be having fun when playing a video game. Sure I enjoy rich narratives and heartfelt moments as much as the next guy, but the pure joy of bouncing off an enemy in Mario or slashing through hordes of enemies in a Musou game is what I live for. Why am I talking about the concept of fun today? Because I don’t know if I’ve had more fun this year than playing my first match of Flippin Misfits.

From the brainboxes behind Dead by Daylight, Flippin Misfits is a vibrant zero gravity combat game that doesn’t take itself even slightly seriously. The titular Misfits have taken over a space station that’s positioned in between three black holes, and have decided to use it to fight each other in ridiculous gravity defying deathmatches. A noble cause I think we can all agree.

The gameplay in Flippin Misfits is simple, but oh so effective. In a large 3D arena, you and four other players are thrown into combat where one hit is all it takes to kill another player. Once you get close enough to an enemy you’ll lock onto them and just need to pull the trigger to end them, but when everyone is flying across the map this is easier said than done. 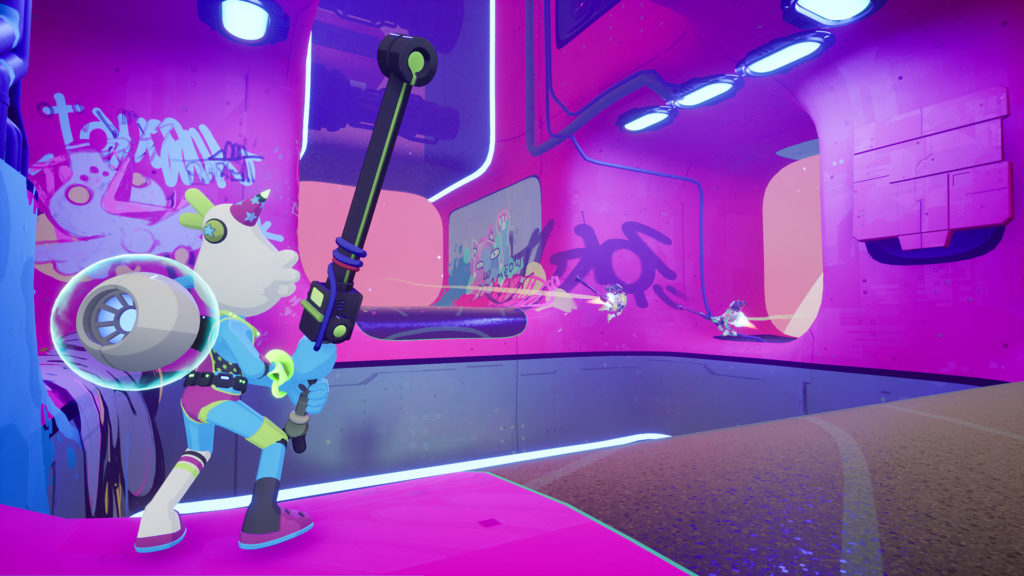 The main way you get around in Flippin Misfits is by changing your gravitational pull. By looking at a wall and pressing the gravity switch button you’ll immediately fly/drop towards that surface at top speed. While falling you can control your fall and adjust where you want to land slightly with the stick, or use your dash to change your trajectory entirely. It takes a little while to get to grips with this, but once you do you’ll be dancing through the air like a Misfit possessed.

Because everyone you’re fighting will be flying around at breakneck speed, it’s really important that you keep track of everyone. You never know when someone is going to cause your death from above, so frantically checking every direction is the only way to ensure your safety. Until at least, you find someone in need of a good slashing.

The combat may only involve one button you’ll press to attack with your weapon, but it actually has a lot of nuance. You see when you lock on and unleash an attack it will have a power level based on how far away from the enemy you are (the closer the better). If the enemy sees your attack coming and swings back at you from a shorter distance you’ll be the one who dies, so it’s really important to get up close to ensure you survive a confrontation. 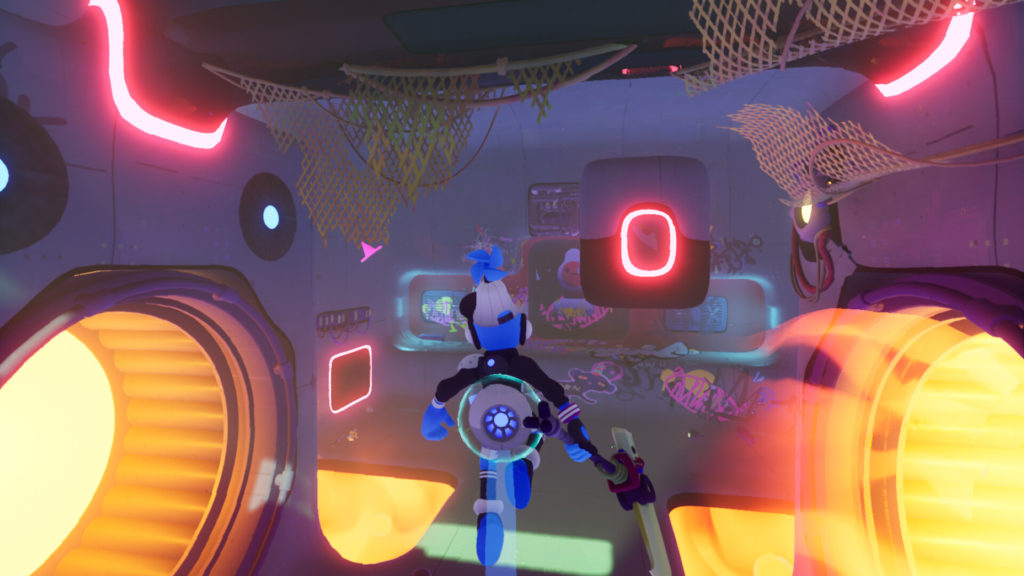 If you both have the same power level when you swing at each other, you’ll clash and bounce off each other and have to attack again. Timing your swing and clashing with an enemy over and over again feels so damn cool, and the tension is like nothing else. The only thing better than winning a standoff with an enemy like this, is soaring in from above and ruining the standoff that two other players are having.

Each arena in Flippin Misfits is completely different to the last, with interesting layouts to navigate, hazards to dodge and sometimes even a lack of walls. The outside stages deserve a special mention, for just how funny it is to watch somebody soaring into the sun with an ill advised gravity switch.

A match of Flippin Misfits is split into five 3 minute rounds, and the player who gets the most kills gets a point. In between rounds though the players will be offered a selection of five mods, with the player who got the least kills getting first pick of the selection. It’s a really cool way of giving new players an opportunity to get a little advantage. 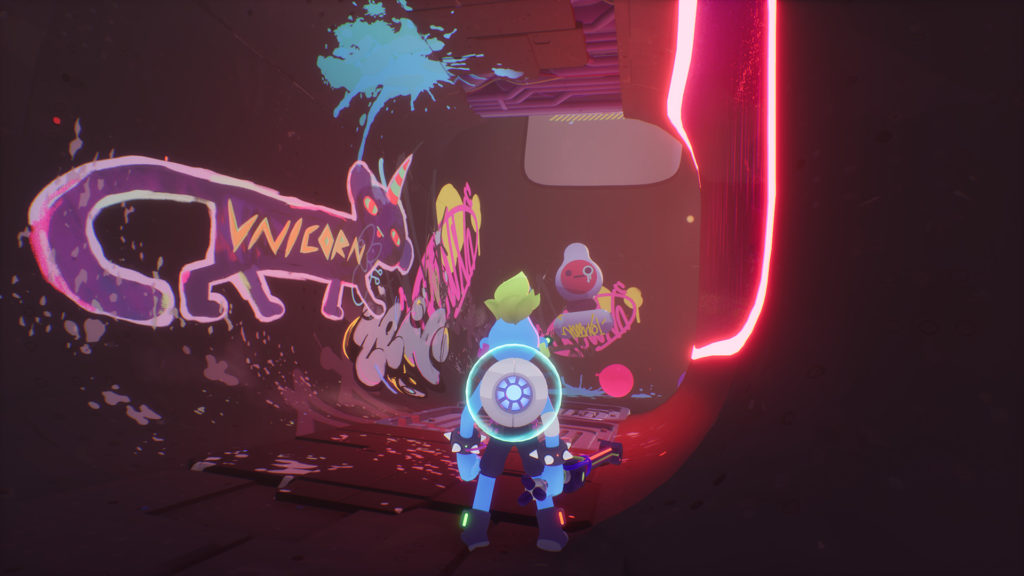 The mods are really interesting too, and make every game of Flippin Misfits feel different. There’s a mod that makes you much faster after you get a kill, a mod that gives you an extra opportunity to flip gravity in mid air, and even mods that swap your weapon out for something different. One of the developers I was playing with was obsessed with a mod that drops a mine after you die, so in the later matches stages were littered with these deadly floating bastards.

It’s worth giving a special mention to the visuals and soundtrack of Flippin Misfits, because they are just sensational. The pastel colours and goofy designs are absolutely perfect for the tone of the game, and the music is equally weird and wonderful. There’s even a song that contains cats meowing, because why the hell not!

I also asked the developers if the game would work on Steam Deck, and to my delight they said yes. On release the game will be considered “Playable” on Deck, with font size as the only issue that prevents them from getting that green verified circle.

Flippin Misfits is the most fun I’ve had with a multiplayer game in a long time. The gravity switching gameplay is spectacular, the instant respawns and short match ensure you never get bored, and all the mods and maps make it endlessly replayable. I can’t wait to get stuck in and murder my friends from above later this month.

Flippin Misfits is launching on Steam on September 27th.