After the Fall review 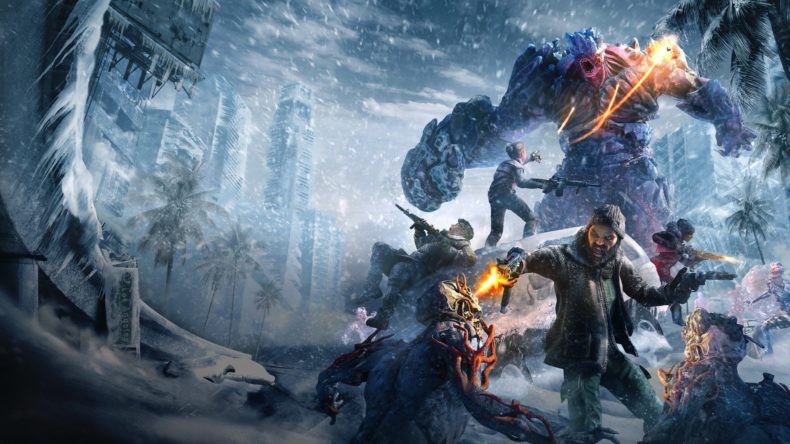 A lot of games out there owe their existence to Valve’s Left 4 Dead, from Vermintide to Second Extinction, but until now there’s never been a real attempt to translate the experience to VR. Enter After the Fall, a Co-op shooter from Vertigo Games.

In this post-apocalyptic world, hell has quite literally frozen over. A freak ice age has decimated humanity and given rise to the Snowbreed, kind of zombie ice-people that freeze you solid instead of eating your brains. Thankfully, it doesn’t need to make a lot of sense, as it’s all just a vehicle to scare your pants off and give you things to shoot at.

The campaign revolves around slaying Snowbreed and collecting Harvest as you make your way from one safe house to the next. Each time you reach a place of safety you can spend the Harvest on upgrades and consumables such as explosives, as well as top up your ammo. There’s not a great deal of gameplay variety, but then even titles like Back 4 Blood are focus-designed to produce a very specific gaming high and this is no different. 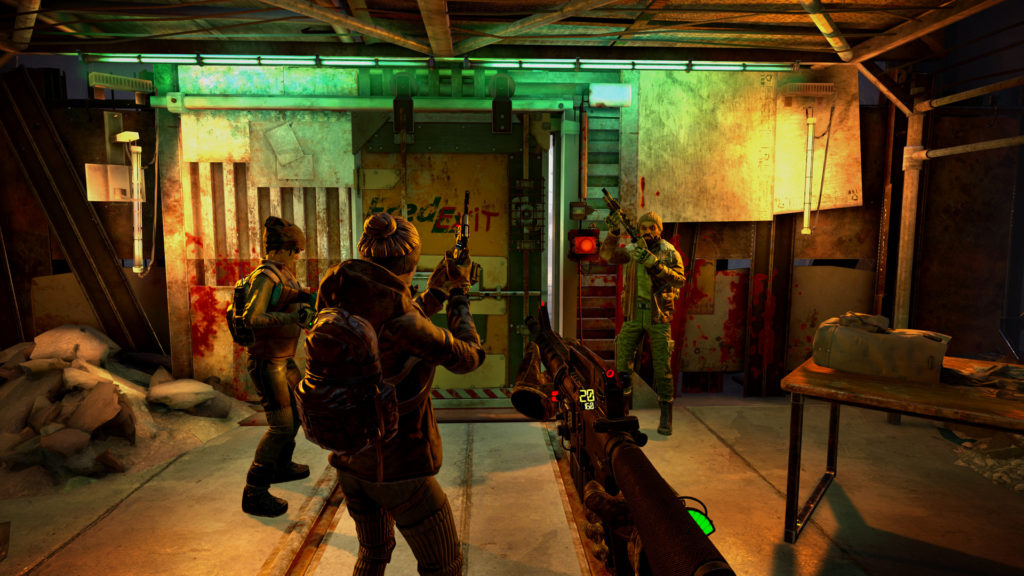 What gives it the spin is that, in VR, shooting rampaging hordes of zombies feels more desperate and at the same time more cathartic. But it does take some getting used to, especially if you’re not accustomed to fast-paced action in VR. If you can handle the inertia of smooth turning, it’s not a million miles from a normal shooter. If like me you struggle to keep your dinner down during long VR sessions, then the teleport movement will help but immersion takes a knock.

Yet, blasting away with two guns, reloading as you backpedal to relative safety, or hurling pipe bombs into a charging mass really don’t get old. Playing with friends elevates the experience further, as the feeling of companionship and camaraderie in the face of overwhelming odds is nothing short of addictive. There are several settings to adjust for comfort, too, such as the height if your gunbelt and how you select different weapons. 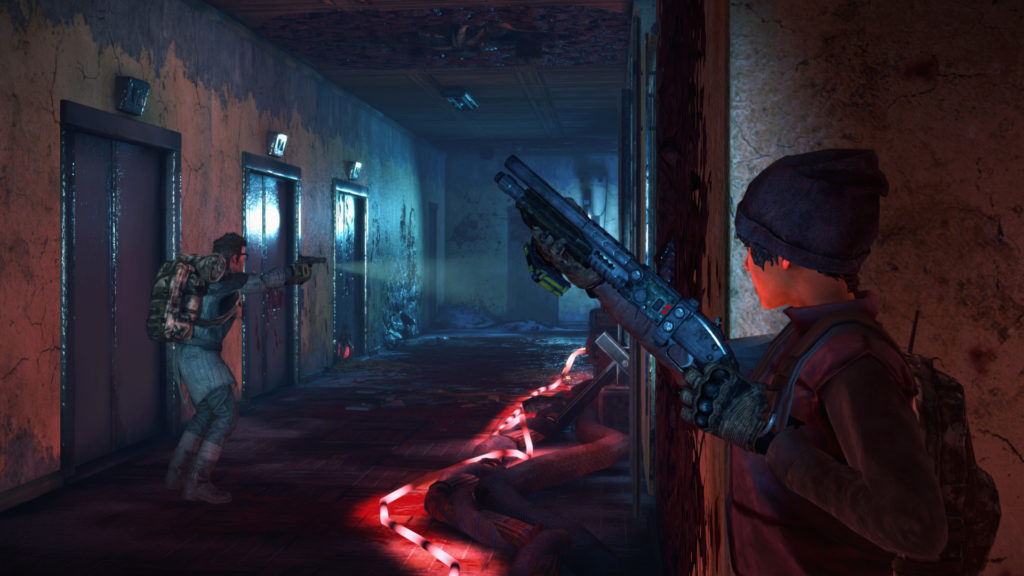 I played After the Fall on two different VR platforms during review, with varying results. On Vive Pro 2, the graphics are crisp and the engine runs like melted butter on a crumpet, but the Pro itself is an expensive acquisition and requires a significant time investment just to set up. It also asks a lot in terms of space, which was my main struggle. On the Meta Quest 2, the graphics take a noticeable hit, but the freedom of movement and room requirements just make it more convenient.

Either way, the sound design is more important than what the world looks like. Neither version is bad-looking and there’s enough ambient detail to bring the environments around you to life, but the sound is where the atmosphere really excels. You’ll hear the distant hordes coming closer, gunfire has a visceral, jarring kick to it, and it’s a really immersive experience.

Weapon acquisition in After the Fall is interesting, and adds an element of grind that works well with the relatively short missions. As you explore and survive you’ll find Floppy Discs (this being an alternate history where the world ended in the 80s, which for many will be pretty on-the-nose). Each one can be used to unlock new weapons or upgrade existing ones. The recent Shock and Awe update added a Tommy Gun to the arsenal, for example. Vertigo have done a good job making each weapon feel different and unique, but honestly I just have more fun John Wick-ing everywhere with twin twin pistols. 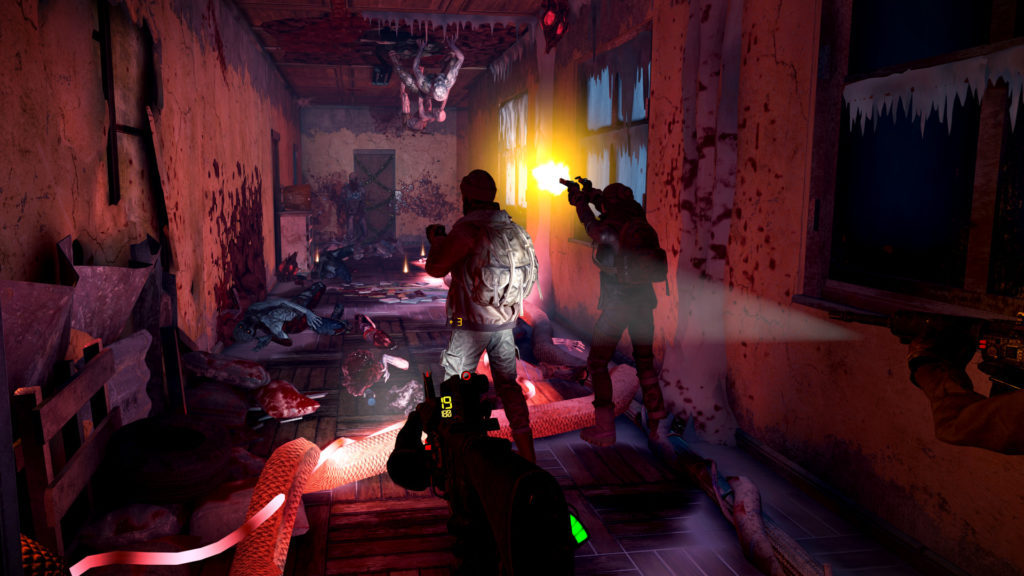 The lack of a dedicated melee attack is somewhat jarring though. While there are tactile elements such as opening lockers and interacting with the environment, you can’t pick up a piece of 2×4 or baseball bat and go ham. It’s especially noticeable when you’re surrounded and you can’t punch or push the Snowbreed and have to just keep trying to backpedal or shoot them. Of course this is where playing as a team comes in, as you’ll need to protect one another to stay alive.

The simple mission structure, replyability and overall catharsis of After the Fall make it a triumph of VR gaming. Whether you’re on a state-of-the-art headset or a more affordable version, the action is fast-paced, satisfying, and stylish.

No melee combat
Story is a bit lacking

The simple mission structure, replyability and overall catharsis of After the Fall make it a triumph of VR gaming.