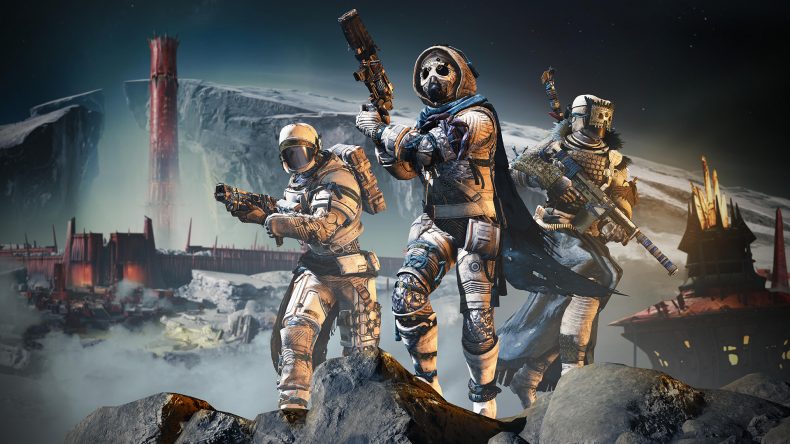 Destiny 2 is in a strange place these days. It’s hard to review it like a normal game, and not just because of the live service element but because it’s such a different beast depending on how you approach it.

For example, newcomers can’t really play it from the beginning anymore. Those who come in at this point will be jumped up to 750 and pretty much told to get on with it. They’ll have to run the base campaign (The Red War), The Curse of Osiris, Warmind and Forsaken to catch up, but they’ll also need to get their head around the Crucible, Gambit, Ascendant Challenges, Strikes, Raids, Nightfalls, The Black Armory, and now the Menagerie, Dungeons, and Gambit Prime. Its a hell of a lot to get into now, not helped by a veritable smorgasbord of different currencies, coins and tokens. Veterans coming to the new expansion are in for yet more Destiny 2, with the meagre story of Shadowkeep doing an OK job of calling back to Destiny 2 Year 1, but not really adding anything to it. This is not another Forsaken, which is arguably the best piece of additional content we’ve seen in Destiny 2, or 1, for that matter. Instead this is a short campaign set primarily on the moon, where you’ll help fan-favourite and all-round Creepy Bae Eris Morn uncover Hive secrets relating to her fireteam, who lore-heads will know were slaughtered in an ill-fated assault on the Hive Prince, Crota.

Those in the middle, the more casual players who just want to jump in now and then to play some Crucible, lose at Gambit or run a few Strikes will find that a fair amount has changed, but probably won’t care much either way. These are the people who just play Destiny 2 like any other game. It’s these players who’ll appreciate the Armor 2.0 update that has overhauled mods and armour stats, who will jump into Strikes or the Crucible and just have fun without concerning themselves too much with what has and hasn’t changed.

Regardless of which camp you fall into, though, there’s now a massive amount of game to get your teeth into. Returning to the moon is interesting, given that it largely reuses assets from Destiny 1. Whether this is intentionally to evoke nostalgia (which it does), or because this is secretly content they cut from Destiny 1 (as many suggested Mercury was in the Osiris expansion) is up for debate. Either way it feels both super cool and a little bit lazy, zipping about collecting Helium Coils again, seeing the same Fallen spawn in the same places as you navigate the same terrain with a different sky-box. Taken at face value, the Shadowkeep campaign is only okay. Yes there are new Strikes, a new patrol area, Eris is back and there’s some story, but it’s over too quickly, doesn’t add anything much to the over-arching plot the way Cayde’s death did, and Bungie are still insistent on ignoring plot threads like Uldren’s resurrection (if that was ever anything more than a joke) or the ongoing dynamic between Mara Sov and the Ahamkara. There’s still no new Hunter Vanguard, and while a new gantry has appeared behind Ikora in the Tower, we once again are left frustratingly clueless as to what the actual plan is for Destiny. This is a universe of staggeringly fun lore, thousands of years of history, heroes, villains, space magic, legends and fables, yet we’re still getting it in disjointed blocks and having to watch loremasters on YouTube to understand what’s going on.

But then Destiny 2 is more than its story now. It’s a behemoth, or maybe a hydra, a creature of many heads that has been bred to cater to as many people as possible within one space. There’s stuff her for soloists, for those who want to run Strikes, for PVP fans. The new Dungeon presents yet another challenge, and the overhauled quest-tracking and bounty system means you are always pursuing something, always improving your character in a myriad of tiny ways. Not to mention there’s now cross play and character migration giving you more ways to play and more people to play with. The Eververse feels less overbearing, easier to sift through, easy to ignore if you want to. And Armor 2.0 makes it less confusing to mod your weapons and gear, or upgrade it to increase your Power Level. What I can say is I enjoyed the Shadowkeep content though it didn’t affect me like Cayde’s death did, and I didn’t find it as well-crafted or colourful as Forsaken. But the changes to the game, the new Strikes, maps, modes and gear? Almost all of these additions and changes are huge positives that have elevated Destiny 2 above what it was this time last year. More than this though, it has pulled me back in. I care again, about where Bungie are taking us, about what they’re planning for Destiny 3, about what they may still reveal in the final few Seasons of Destiny 2.

Fans of the game don’t need to be advised on whether or not Shadowkeep, or indeed Destiny 2 as a whole, is worth it, and those on the fence should only swing their legs to this side if they’re ready for a gargantuan adventure full of giddy highs and some incredibly lacklustre lows. The lunar surface is no Dreaming City, but it holds enough new surprises to make it worth a return trip.

Armor 2.0 is a solid update
Returning to the Moon is a nostalgiac treat
Eris Morn, 'nuff said

There's certainly enough new content here to keep fans interested. Shadowkeep's lunar surface is no Dreaming City, but it holds enough new surprises to make it worth checking out