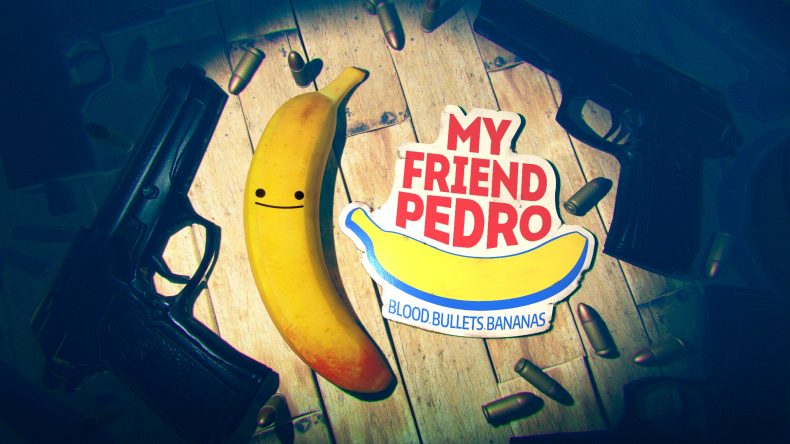 I have long believed that certain fruits and vegetables are fundamentally evil. That if they were to suddenly gain sentience, they would immediately begin planning the downfall of human society. Brussels sprouts, for example, have a certain air of ruthlessness about them, while I’m certain sweetcorn would attempt to attack en masse and overwhelm by sheer weight of numbers. And don’t even get me started on grapefruit.

But if there’s one fruit or vegetable I truly believe would have our back in times of crisis, it’s the humble banana. Friendly, comforting, zipped up tight in their dapper little suits and shaped, quite frankly, like a great big grin, bananas would almost certainly be on our side.

Which rather convoluted and drawn-out introduction brings us to My Friend Pedro, a game which begins with – among other things – a very friendly banana. Having been imprisoned by a crime boss called the Butcher, your masked and nameless protagonist is awoken in his cell by a floating, talking banana named Pedro, who immediately begins guiding him towards freedom. A side-scrolling shooter and platformer, My Friend Pedro mixes up what could be a very mundane exercise with some truly excellent gunplay.

In no time at all you’ll come into possession of two handguns, which can either be simultaneously unloaded into the goon in front of you or split up by holding down the left trigger to target two enemies at once. Clicking the left stick enters a kind of slow-mo bullet time, making targeting enemies easier and performing gravity defying flips and sumersaults much smoother. Uzis and a shotgun help to mix it up, but the real beauty is in the movement. Hitting A will cause you to spin and evade oncoming fire, which you can combine with wall-jumps, swinging and, at certain points, skateboarding to chain moves and kills. If you remove one enemy’s head, usually by the careful application of point-blank shotgun fire, you can kick it at another enemy. Now and then you’ll find a frying pan which, once launched in the air, will allow you to score ricochet kills. You’re awarded extra points for stylish skills and a multiplier rewards you for avoiding damage and chaining kills.

Fancy gunning down a room full of thugs in Santa hats while barrel-walking? Or living out your Deadpool fantasies by blasting away two goons in slow motion simultaneously? My Friend Pedro is the game for you. In fact, add a sword and change the colour of the outfit and this would be a great jumping off point for a Deadpool game, like the legendary Freeway Chase in video game form. A mid-game trip into either your protagonist’s or Pedro’s subconscious offers a kind of snapshot of just how nuts this game could have been had the developers wanted to. Whether it was the tight budget, small team or time constraints that held My Friend Pedro back from going all out, the third chapter is a slice of pure madness with disappearing platforms, huge screws you’ll need to spin on to fasten or unscrew, enemies that float into the sky when you kill them and massive bounce pads. For whatever reason, it’s a truly standout area that evoked memories of guiding Commander Video through Runner 3, only with guns and slow-mo death.

Although it takes a few levels to really get your head around the flow of combat and movement, simplicity is actually one of Pedro’s greatest strengths. Each stage is short and linear, occasionally presenting fairly straightforward puzzles and taxing boss fights, even managing to include both a helicopter fight and a bike level. At the end of each stage you’ll be ranked based on speed, deaths, style and skills, and you can replay a stage as much as you’d like. There’s scope here for more modes and certainly more levels, and it feels like if this is successful a greatly-expanded sequel is inevitable. But as it stands what’s here is immense fun. Its hard to really pick fault with something so deliberately off the wall and self-aware. The movement could be more precise in places, but the shooting is on-point and the difficulty always manages to maintain a fairly even keel. If anything, it might be a little too easy at times, though the real challenge is finishing each level with a perfect score.

Simple playability goes a long way sometimes and My Friend Pedro has it in spades. The story, while hardly the main draw, is humorous enough (breaking up a bounty hunter Christmas party or invading the sewer lair of a gang of cosplaying psychos are highlights), and the dialogue (mostly from Pedro) is riddled with in-jokes and references. It’s a little easy to blast through and it’s over too soon, but while it lasts My Friend Pedro is a unique, likeable shooter and some of the best fun I’ve had in a while.

Not overly challenging
Quite short

It's over too soon, but while it lasts My Friend Pedro is a unique, likeable shooter and some of the best fun I've had in a while.