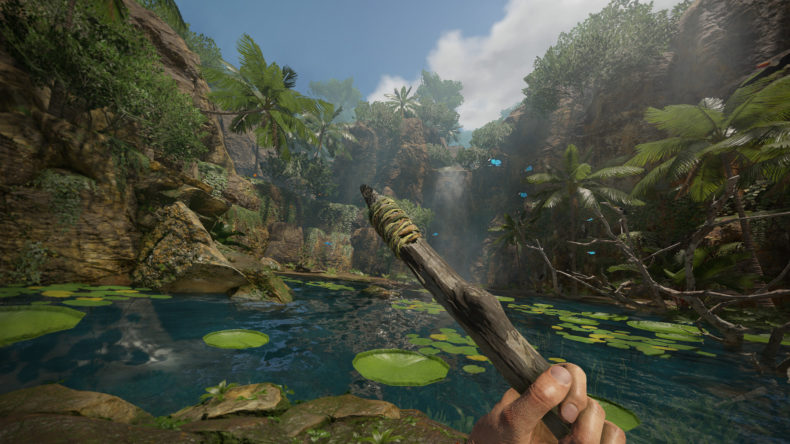 There are some concepts that just slot perfectly into the inherently square hole that is VR. Walking sims, for example, and on-rail shooters, are relatively simple in terms of what they demand from the player and the hardware. A title like Green Hell isn’t an immediate shoe-in. It’s complex, deep; the jungle environment is dense and detailed. And there’s a ton of things going on at any given time, from capybaras in the undergrowth to an ever-changing weather cycle. But somehow, developers Incuvo make it work in Green Hell VR: Quest Edition.

Taking over from original devs Creepy Jar, Incuvo had their work cut out translating the tense, unforgiving atmosphere of Green Hell’s jungle from the TV to the Oculus Quest 2. The jungle itself is such a major element of the game that lessening any of it, even slightly, could have had a truly detrimental effect. I mean, if we’re super honest, there are some concessions that stand out more than others. However, the use of sound to sell the environment is masterful, and it’s not long before you begin to settle in. 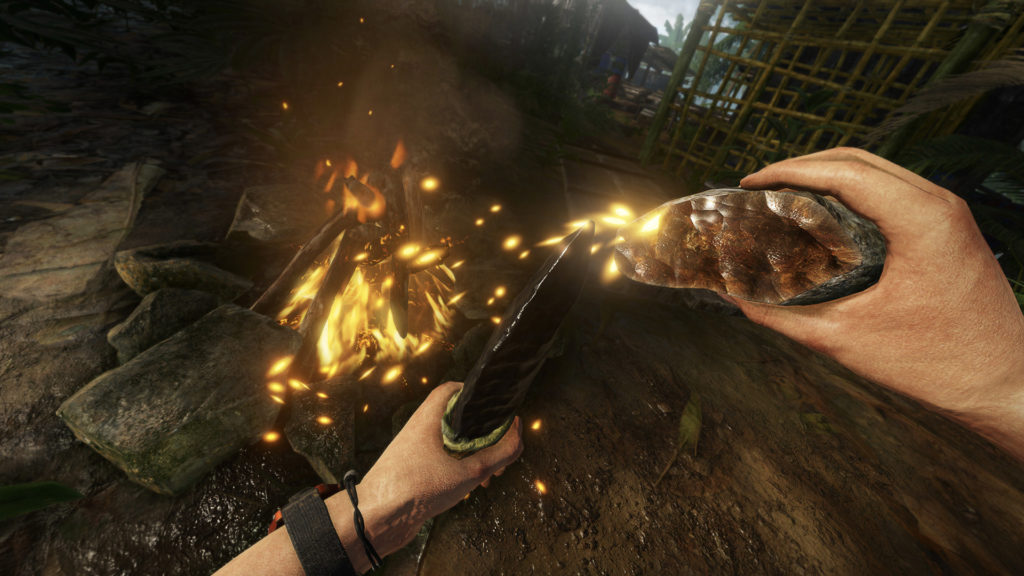 Green Hell VR’s story is the same as the original. As anthropologist Jake, you’re stranded in the jungle and your wife Mia is missing. Armed with nothing but your wits, your smart watch and whatever you can scavenge from the world at large, you must find Mia and escape this nightmare. And it is a nightmare, too.

Everything in the jungle can kill you or at least cause you serious harm. Even drinking the untreated river water can be deadly, and infections and disease are never far away. The VR jungle is smaller, more compact, though perhaps not particularly noticeably so. Being in virtual reality makes everything you do that bit more immersive. Gathering rocks, starting a fire, collecting water. At one point I even caught myself warming my virtual hands over the virtual flames. It’s not perfect, but the fact that the world is a little more streamlined is not an issue.

I tend to suffer from terrible motion sickness in VR, and so if there’s an option to move by teleport I usually take it. This in itself can damage the immersion, and yet I never felt it was much of a problem. The controls are intuitive and responsive, and it was easy to just relax and get into the spirit. Well, maybe relax is the wrong word. I almost hit the ceiling the first time I heard a hiss and shucka-shucka-shucka and found a rattlesnake at my feet. Likewise, that rustle in the undergrowth is as likely to be a capybara as a jaguar. 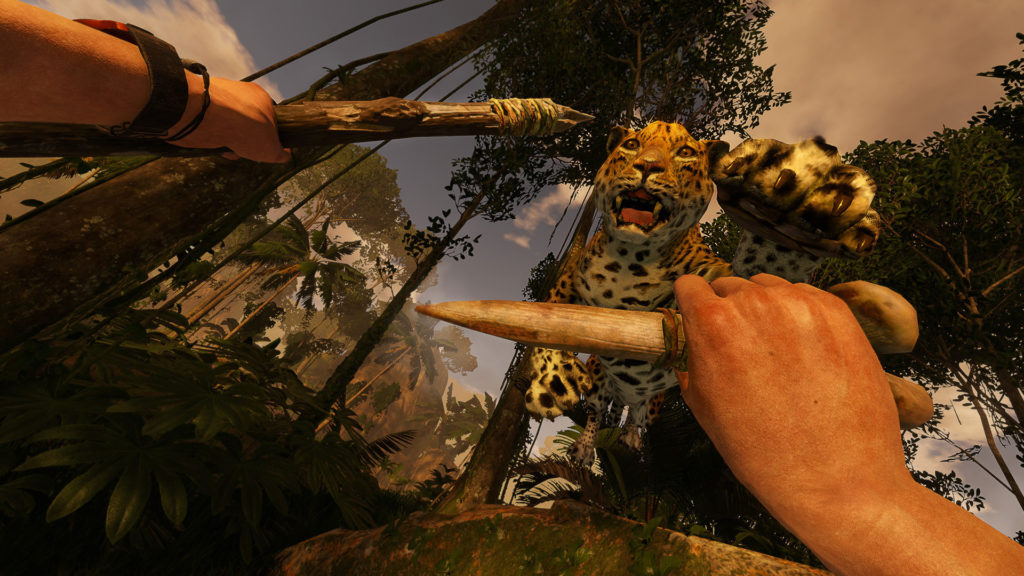 Actions such as checking yourself for injury and applying bandages, cutting down trees with the machete, or constructing a fire take on a whole new dimension when completed in VR. The surround sound works pretty well, too, and I would often find myself looking over my shoulder at a sudden noise. Sadly, though, the Oculus Quest 2 does have some rather severe limitations in terms of visuals. Played on PC, the original Green Hell is a good-looking game. The jungle is believable, the detail impressive. On the Quest 2 it’s less so. Foliage looks a little blocky, objects are hazy at a distance, and the lighting isn’t as convincing as it needs to be.

I certainly wouldn’t say that it looks bad. I just went into it right from fifteen-ish hours in the PC version and it makes a difference. That said, it runs pretty flawlessly, so it’s a case of taking the rough with the smooth. One massive change that seems obvious now in hindsight is how physical this game is in VR. Chopping wood, gathering rocks, even simply tying logs together to construct a shelter – these things can be physically draining. Especially with a heavy VR headset strapped to your face.

What’s weird is that with teleports and comfort controls, it becomes a little easier. I stumbled down hills a lot less, was able to gauge jumps with more confidence. I encountered far fewer predators, too, and the reduced space between areas of interest meant I wasn’t running out of food half as fast. Of course, I wasn’t a newbie during my VR playthrough, and had learned to parcel my rations much better. I also knew what to take and what to leave behind, so I often had bananas and bandages handy when I started out. Finding a cave early on with a bed and spot for campfire was also a massive bonus. 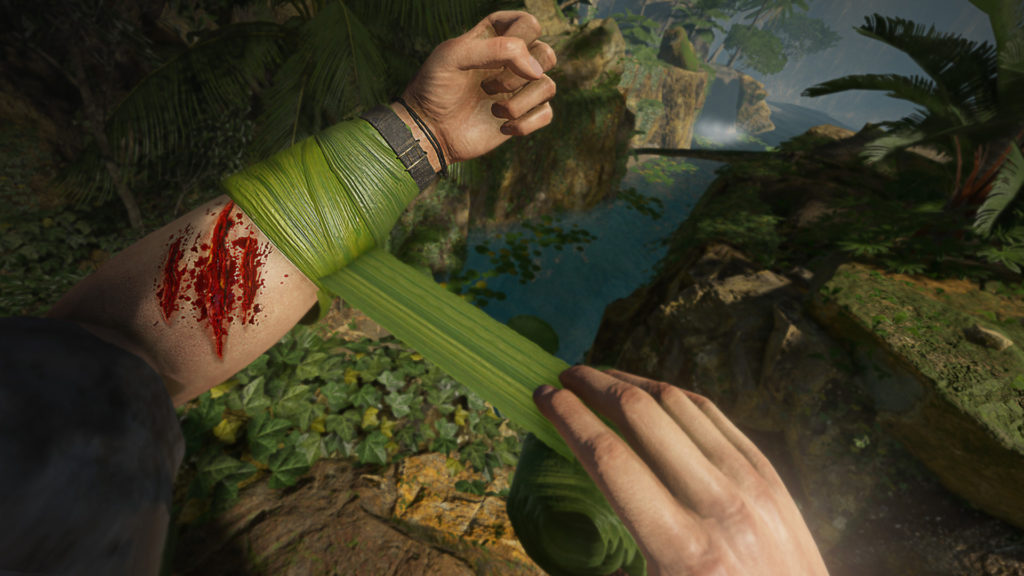 As VR becomes more mainstream it begins to feel less like gimmickry. There’s little in Green Hell VR: Quest Edition that feels like it was only put in to wow people. Simple acts like checking your watch, or pulling out your notebook and leafing through it for info feel tactile and natural. The occasional cutscene whereupon you lose control and the action is surrounded by a thick black letter box aren’t great for immersion, but these moments are rare.

Overall, Green Hell VR is a confident, highly competent take on the survival sim. The jungle is a dense, dangerous place, and the atmosphere is thick and believable. Glancing up to see birds wheeling in the sky, or watching fish dart away from your clumsy feet as you cross a river are beautiful moments that do a great job of breaking up the tension of day-to-day survival, and none of Green Hell VR: Quest Edition feels like filler. It takes some adaptation, sure, but it’s an immersive adventure into the unknown that may be a little less punishing than the original, but is certainly no less thrilling.

More forgiving than the original
Graphical concessions have been made

None of Green Hell VR: Quest Edition feels like filler. It takes some adaptation, but it’s still an immersive adventure into the unknown.

Green Hell: Spirits of Amazonia Part 3 is out now on consoles!