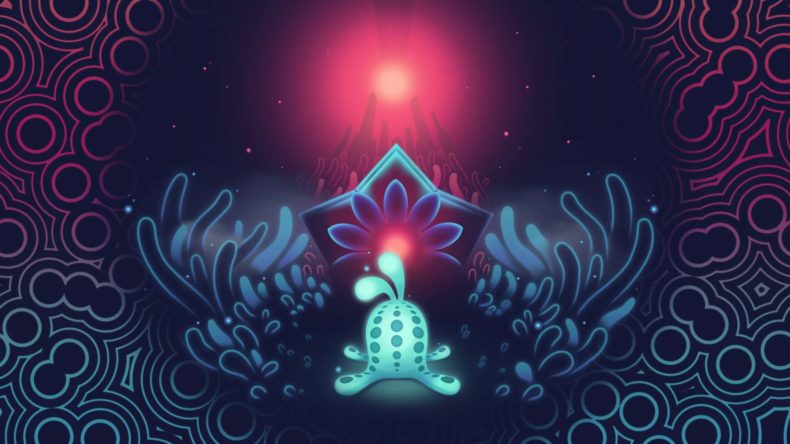 The premise of Lumote is a simple one. The principle colours in its glowing, bio-luminous sub-aquatic world are blue and red. You are tasked with controlling the titular squidgy green creature who can jump and double jump around the 3D platforms, as well as attaching to objects to manipulate, move and activate them. This cutesy slug has one aim – to reach the very bottom of the mysterious depths. To do this, you must help to turn the red into blue, by any means necessary.

From the get go you can pan the camera around and view the glowing red areas beneath you. The opening area is effectively a tutorial to help show you the ropes. Controls are simple with just two buttons used to jump or employ the attach mechanic. As well as being visually arresting from the start, the movement is smooth and easy to pick up, with the camera mapped to the right stick which rotates around your avatar nicely. Alien creatures, presumably native to the environment, that help Lumote light up the blue pathway to progress are then steadily introduced. 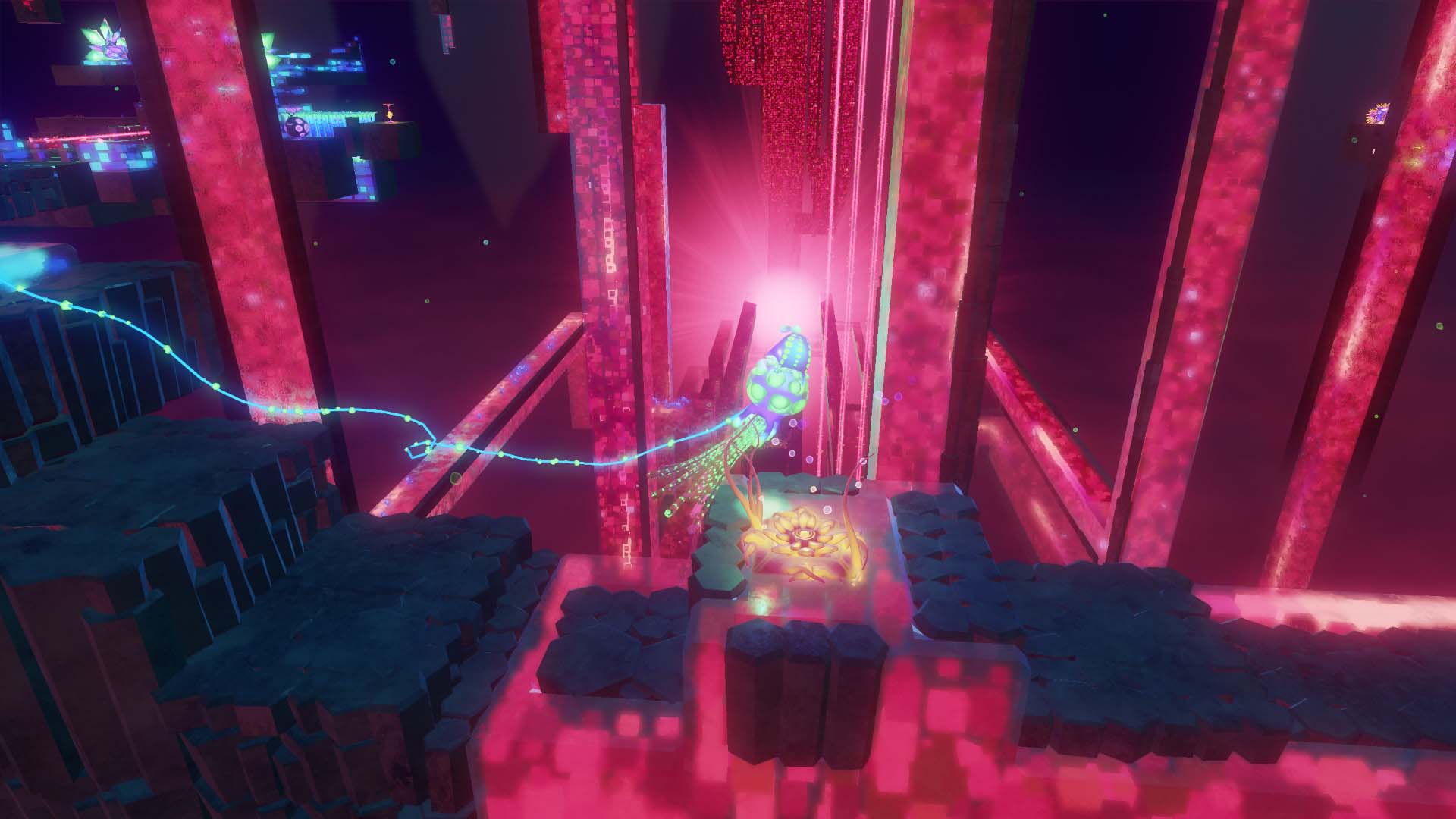 Attaching to different flora and fauna will have a lot of functions, some of them a surprising delight when coerced into action. Platforms will carry you, standing on certain blocks allows you to control them and act as a battery to power on an explosion of blue. Each section has a beautiful flower which acts as a locked door that must be opened by sending tendrils of blue light down to allow it to bloom from red to blue. The complexity of the puzzles steadily increases to the point that there are beams of red and blue light intersecting, crazy platforms made of tentacles, jellyfish and moths floating around, and you really have to use your noggin.

The platforming aspect kicks up a notch too and becomes more of a consideration from the second stage onwards. You will start plummeting your doom more frequently, which triggers a respawn from the last flower you moved through, but it will also completely reset any of the puzzle solving tinkering you had done before you dropped into the inky blackness. 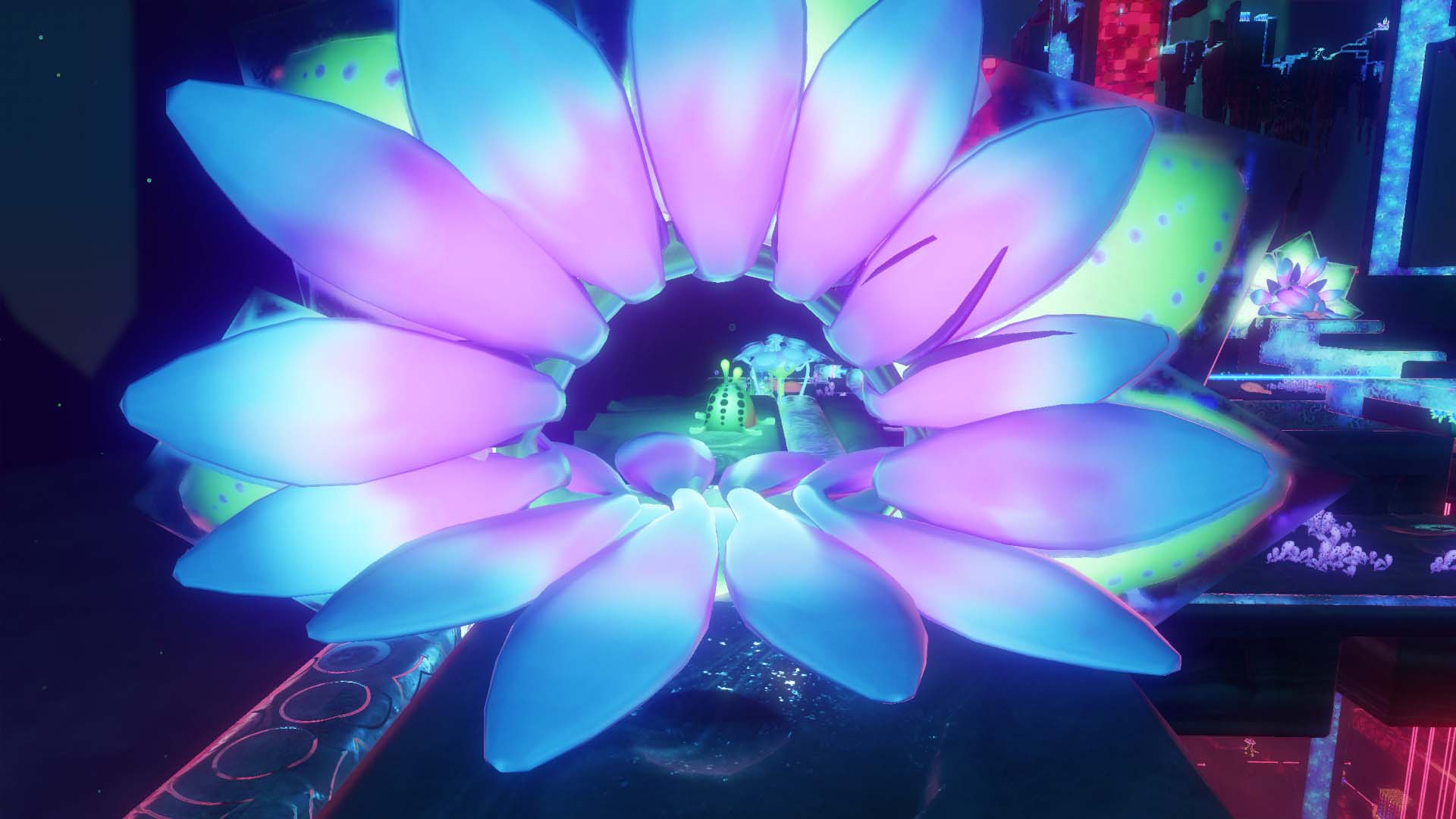 There are a few issues that prevent this from being considered a top-tier puzzler. Some of the objects you have to move and manipulate – particularly the boxes that travel along set paths – can be fiddly to move around how you would like them. Sometimes the puzzles become too complex for their own good with far too much going on, including some frustrating instances where you discover that you can also die by being crushed between objects.

Of course, the other thing that weighs this one down is the repetitive nature of the scenery in its game-world. There is only so much you can do with a game that is based around two colours, and there is a lack of variation which led to a bit of burnout for me later on in proceedings. That said, this is still a fun and great looking game, with the sense of depth and scale of the world a treat to immerse yourself in for a while – and deffo one for genre fans on the lookout for some isometric puzzling.

Lumote is a fun and great looking game, and the sense of depth and scale of the world is a treat to immerse yourself in for a while.

The Falconeer has a new story trailer