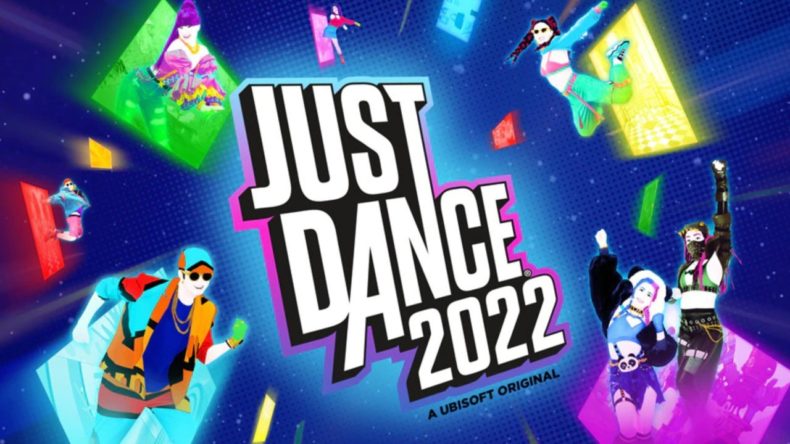 We humans are, as a species, creatures of habit. We thrive on routine, on planning ahead, knowing what’s coming. As sure as Christmas is Christmas, we expect the next Far Cry, Call of Duty, Battlefield, Forza, or Pokemon to drop year on year. When there are gaps in the supply chain we feel them. We pretend we want to wait a year while whichever multi-billion dollar corporation fine-tunes its latest annual release, but really we just want the comforting embrace of the Known. Perhaps no other franchise outside of FIFA can promise that feeling as well as Just Dance can. And with Just Dance 2022, Ubisoft prove once again that they are the kings and queens of consistency.

To outright call Just Dance 2022 formulaic would be inaccurate and, frankly, a little disparaging. It offers comfort in the form of familiarity, yes, but as with Ubisoft’s now-patented sandbox, the formula simply works. Rather than attempt to innovate in meaningful, and risky, ways, Ubisoft understand their brand. They know what they’re selling us, and we know what we’re buying. It’s a comforting circle.

Strictly speaking, I’m not sure I’m the intended audience for Just Dance 2022. You see, I am not a dancer. Never was, never ever will be. I have two left feet and the coordination and spacial awareness of a half-blind squirrel tied to a ceiling fan. And yet even I have a fair amount of knowledge – if not skill – when it comes to this franchise. Partly, this is attributed to just how accessible Just Dance is. 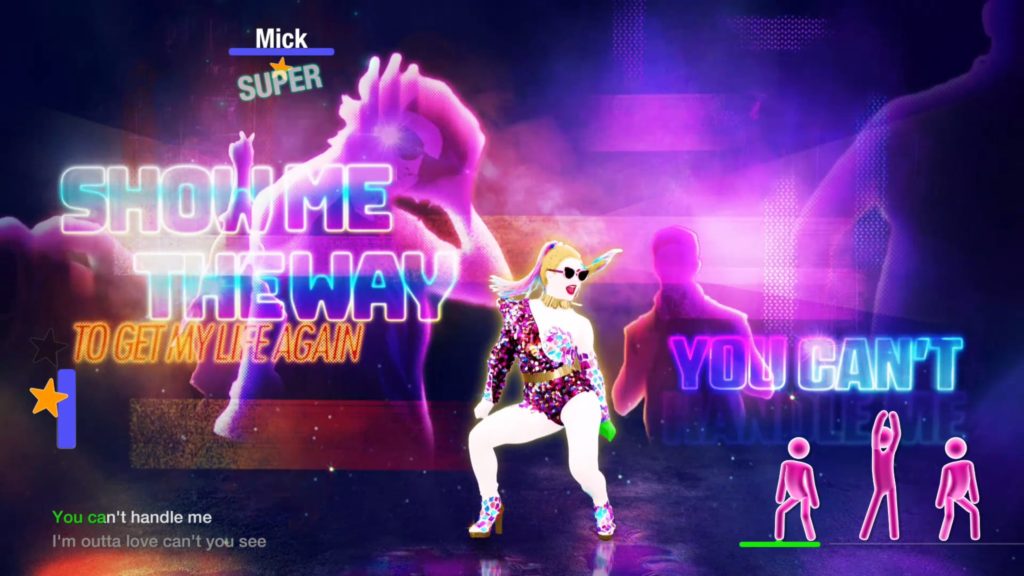 It hardly seems aimed at dancers. Since you control the action with just one hand (gripping a Joy-con on Switch or a mobile device on the other platforms), you could quite easily cheat the game and just wave your arms around like you did on Wii Boxing. And don’t deny it; we know you did it.

But that would be cheating yourself more. The point here is to have fun. It’s not a super competitive game. Even when playing head to head, either with someone beside you or distant internet folk on the World Dance Floor, the result will probably be the same: laughter. Unless you’re taking it seriously (which some may, of course), you’re definitely going to have a laugh with Just Dance 2022.

Its bright and colourful, with each of the 47 tracks sporting its own video. The majority of these are psychedelic affairs with professional dancers placed front and centre, with the controlling hand illuminated so you know where yours should be. Some have slightly higher production values though, such as “Human” by Sevdaliza which has the dancer in full costume on a set. 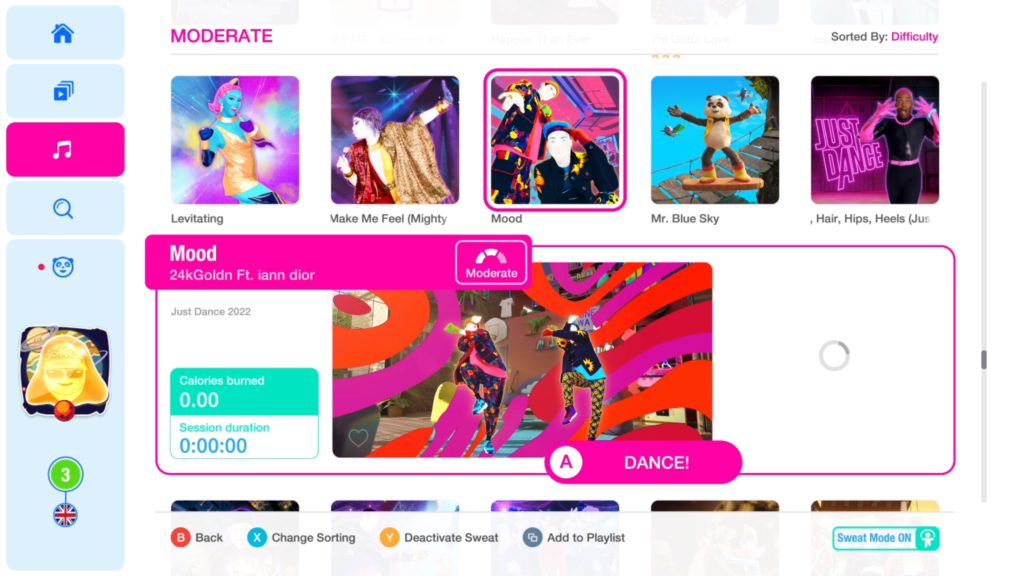 Dance til you pant

Set at Easy, Medium, or Hard, your goal is to love when they move, which sounds incredibly simple but which in practice is anything but for a non-dancer. Some tracks have extreme versions as well, which up the ante further. Of the 47 tracks on offer, only a select fee are real bangers. “Mood” by 24KGolden and “Pop/Stars” by K/DA are favourites, but it mixes in a few lesser known or international tracks in order to broaden the appeal across the demographic.

Speaking of which, Kids Mode returns, which features 8 new tracks for youngsters to bop to. This mode takes some of the more pressurising commands away, and replaces some of the language to appeal to the younger audience. It’s decent, but the tracks on offer are simply not that great unless you’re willing to fork it for Just Dance Unlimited.

This service costs a fair amount, but grants access to around 700 tracks for both grown-ups and kids. Compared to what’s on offer in the main game, you almost feel obliged to pay it. It doesn’t help that Just Dance 2022 reminds you about it constantly, after every dance, on the home screen. Even the pre-made playlists are predominantly Unlimited tracks. It’s irritating and a bit insulting. By now, they my as well just offer a paid update of tracks and features every year and stop re-charging for older songs. 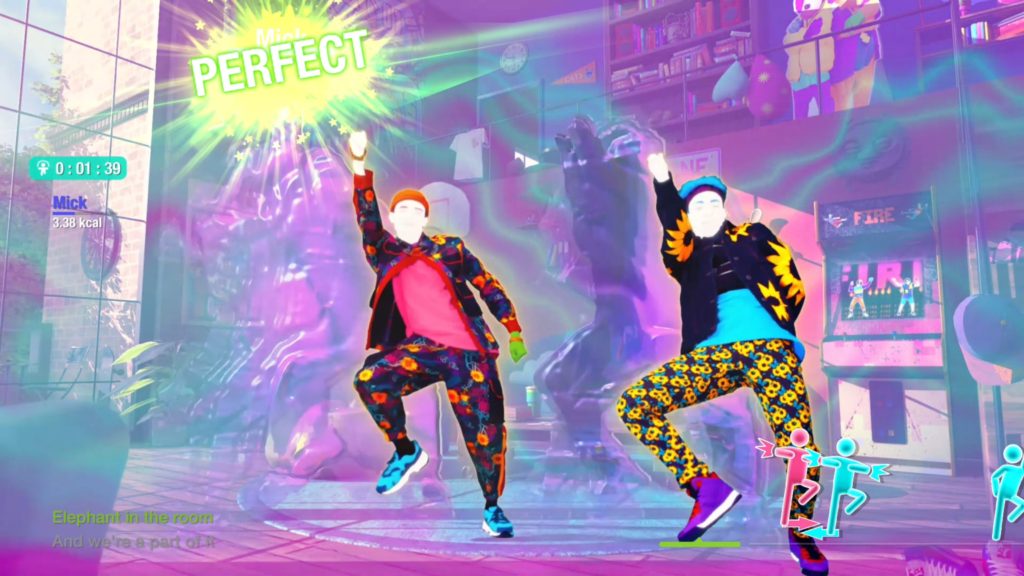 One welcome return is Sweat Mode. This transforms every dance into a workout by replacing the score system with a calorie counter. It’s a great addition to the game overall, encouraging you to play solo and push yourself. It also makes for a much more entertaining workout than simply hitting the weights in the spare room.

As in previous entries, you spend in-game currency (earned by completing challenges) on a slot-machine that spits out random avatars, profile backgrounds, and titles. It’s a fun system that consistently rewards your efforts.

If you’re a fan of the series already, then Just Dance 2022 won’t surprise you in any way. But then if you’re a fan, you probably don’t want to be surprised. Anyone new to the franchise may not be overly wowed by the standard track list, but if you’re willing to pay for Unlimited I’d suggest you may never get bored. Either way, don’t be put off, regardless of whether you can dance or not. It may be familiar and it may bring little that’s new to the table, but it’s still a hell of a lot of fun.

Some solid tracks
As accessible as ever
Genuinely feel-good

Just Dance 2022 may be familiar, and it may bring little that's new to the table, but it's still a hell of a lot of fun.