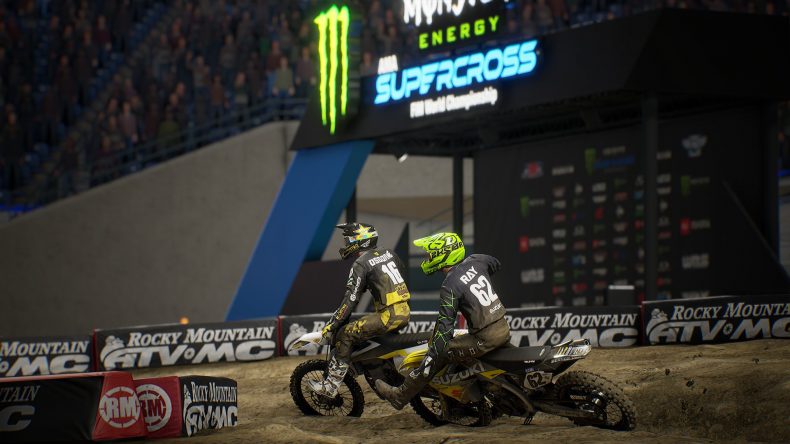 Switch Re:port covers the Nintendo Switch port/version of a game newly released on the platform. Monster Energy Supercross 3 was released simultaneously across all formats and scored 7.5/10 on PC.

I enjoyed Monster Energy Supercross 3 on PC, it felt like a game that developer Milestone had created while taking on feedback from its previous attempts in the series. When I initially played the Nintendo Switch version, I thought it looked good and its framerate was stable, but it suffered from some unbalanced AI difficulty and problematic handling and physics. However, the game’s Day One patch improved the gameplay enough that it genuinely felt much closer to its PC cousin.

The controls aren’t quite the same as using my Xbox One controller on PC, however. The lack of analogue triggers will always be an issue on Switch, so tapping the throttle is my only current recourse to simulate gradual acceleration, which isn’t actually much of an issue. The main problem lies in the sticks on both Joy Con and Pro Controller, as they are simply not as precise as those on Xbox and PS4. This results in twitchy handling, but after the Day One patch’s release, the problem has been toned down somewhat. Sure, now and again it will randomly head off-course or it will struggle to turn a corner properly, but there seems to be some behind-the-scenes smoothing involved that helps point the bike in the right direction. Most of the time, anyway. This is where you’ll be happy to see the rewind feature return in Monster Energy Supercross 3, allowing you to undo those pesky control issues. And, of course, mistakes made by the player. We all make them, sometimes sending your poor rider flying across the track, sliding through the mud like a human sled. When I originally played pre-release, any contact made with the barrier (sometimes even your fellow racers) would turn you into one of those aforementioned sleds, but I’m happy to report that that only really happens if you hit them at high speed. The game seldom throws you from the saddle without good reason now, but the rewind function is ideal for if it does happen. You can turn it off though, if you’re the hardcore type. I’m inclined to warn you against that, as the game isn’t entirely without flaw post-patch, but it’s far more stable.

What isn’t always stable, however, is the AI. Pre-patch, it was way too good even on easier settings, often laying waste to my lap times no matter the difficulty I used. Post-patch, this is no longer an issue. It’s still not quite as balanced as it should be, but racing is much more fun now that the challenge matches the settings on which you play. Races are more fun, getting your elbows out as the full roster of riders stampede into the first corner, rarely with everyone coming out the other end intact. Aggression is actually a surprisingly prevalent part of the real AMA Supercross series, but I guess that’s just what happens when you try to fit over a dozen bikes onto tracks that are only wide enough to fit a third of them. It’s frustrating when the AI shoves you off the track though, or lands on you and messes up your landing from a jump, especially when that leads to a ruined flow through the next series of jumps and bumps. It does look good, though. When docked, it’s a little blurry on a big screen but otherwise looks impressive, running at a decent framerate of around 30 frames per second. In handheld, it looks just as good but with sharper-looking edges, though the rather brown palette will have you squinting as you try to work out where the next turn is, but that can be an issue with any game on a smaller screen. One thing that doesn’t look good however, is the roster of riders. Especially when long hair comes into play, which it did when I created a custom rider. Before the patch, her hair would frequently look translucent, like she had a liquid wig on her Lex Luthor-like bald head. After the patch, it’s less of an issue but it’s still there. The hair looks less translucent, but it still clips wildly through the bald head underneath. It may seem like a minor issue to point out, but it’s extremely noticeable in every single scene in which she appeared without her helmet. It’s real nightmare fuel, at times.

Monster Energy Supercross 3 does come with a nice amount of content, from the lengthy career mode, to being able to create your own tracks and even play around in the open Compound. Again though, this comes with a caveat. The Compound is fun to explore, but it has major pop-in issues and at times the textures look fairly ropey when heading off the beaten path. There are even entire areas missing, like the container yard which is just a giant, empty square of concrete on the Switch.

Despite its issues, Monster Energy Supercross 3 is a decent racer on Nintendo Switch. It can’t compete with its more powerful PC/console cousins but, thanks to its Day One patch, it doesn’t do a bad job of emulating them.

Editor’s note: This review is based on a patched version of Monster Energy Supercross 3. If you play without the patch because you cannot connect to the internet, etc, you will have an inferior experience.

Monster Energy Supercross 3 is a decent port on Nintendo Switch, but still suffers from some handling and AI issues.