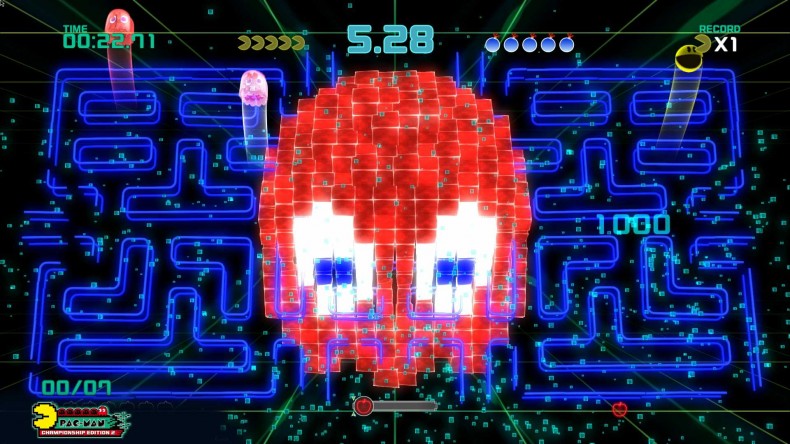 Everyone loves Pac-Man, right? Wakka-wakka-ing his way through an almost infinite number of mazes, avoiding ghosts and enjoying an all-you-can-eat buffet of yellow pellets. But Pac-Man lives in a dog-eat-dog world, where ghosts murder Pac-Men and pellet-addled Pac-Men devour ghosts whole, all in the name of getting the highest score. But it’s okay here in Pac-Man Championship Edition 2, because some of the ghosts are fifty times their normal size and threaten to destroy entire mazes, not just our little spherical hero.

That’s right, this is a Pac-Man game with boss battles. It may sound absurd but it really does work, adding an extra layer of challenge to an already tough Adventure Mode. In this mode, you have a limited amount of time to complete a number of stages within a given area, which unlocks a boss stage to round it off. These bosses attack the maze once you’ve unlocked the exit to each level, which angers any ghosts into chasing you down. Exiting drops you down a level and grants you a few precious extra seconds to unlock the next exit, until you reach the bottom and have the chance to kill the boss. Eating pellets unlocks the exit, or in the case of the bottom level, it releases the pellet needed to end the stage and kill the boss. Of course, Score Attack is also available for fans of classic Pac-Man. It’s not quite how you may remember it, but it’s no less fun. Ghosts no longer automatically kill Pac-Man, instead he can bump into them once without consequence, but repeated bumps will anger the ghost and cause it to chase you down, killing you if it catches up. Losing a life also loses your score multiplier, which builds as you eat up consecutive pellets and is absolutely essential if you want to get the highest scores. The higher your score, the higher the ranking you receive for bragging rights on the online leaderboards – not to mention being necessary to unlock trophies/achievements on your chosen console, if those are your thing.

Pac-Man Championship Edition 2 may never win any awards for complex graphics with millions of polygons, but it will surely win your heart with its pure arcade aesthetic and nostalgic feel. Score Attack even allows you to customise your gameplay, from choosing the background style and the look of the ghosts (including the original sprites) to which music track will pump through your speakers as you play. Played in the traditional style, it looks exactly how you would expect with its simple blue walls and yellow pellets, but with moving backgrounds that bring to mind the likes of Tempest with its neon lines and shapes. Things do take a bit of a turn when you eat a pellet that allows you to turn the tables on the ghosts, especially when you’ve built up a long train by waking up tiny ghosts that are dotted around the maze. If you can cut off the ghost train’s progress, the camera shifts to a low angle as a winding purple column of ghosts floats in midair and Pac-Man eats his way to the top, score numbers showering the background. This becomes a regular sight in the game as you get better, with scores reaching into the millions as you chase that elusive S rank. Speed is key in all modes, and pressing the direction you want to move in just before you hit the next corner will result in sparks coming from Pac-Man as he rounds the corner at high speed, increasing momentum and your chances of getting the highest scores. This speed, coupled with the increasing number of ghosts on screen (especially when a large train is involved), can result in an overwhelming and confusing sight. Your attempts to eat all the pellets whilst frantically avoiding all the ghosts on-screen will inevitably go awry from time to time as you struggle to make out where you and where you’re heading.

But that is honestly the only real flaw in the game, and you’ll be too busy having fun to notice any other potential issues. The fun beats of the music, pumping out at insane speeds as you navigate mazes, complemented by familiar blips and bleeps from Pac-Man games of yore, mixes perfectly with the vibrant visuals to form a nostalgic sense of being at an arcade machine in the 80s or 90s. The number of levels on offer will keep you going for weeks, but the leaderboards will keep you coming back long after that, especially if you’re the competitive type and have friends also playing the game.

Pac-Man Championship Edition 2 makes a few changes to the formula, but it makes for a slightly different experience that is just as fun as any Pac-Man game to date, and Adventure Mode offers enough challenge to keep even the best players going for a while.

Things can get a bit too hectic to see