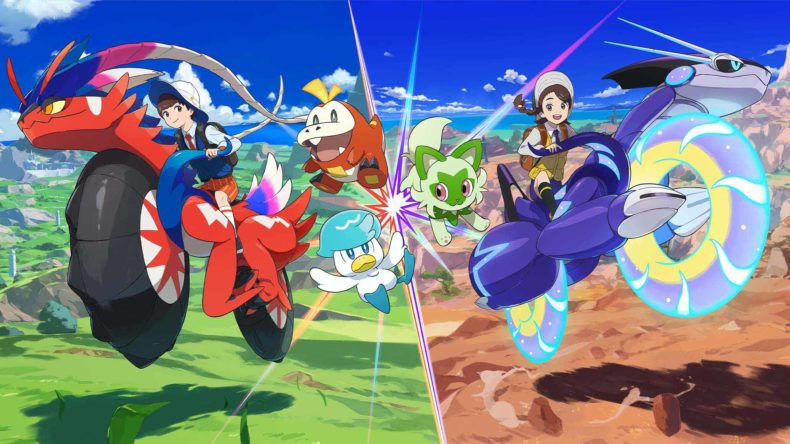 There’s no question that Pokemon Scarlet and Violet is the most ambitious title in the long-running series Game Freak has helmed since around 1996. The ninth generation of Pokemon sees the franchise go open world, offering an adventure that pretty much lets you play as you see fit. Unfortunately, just shy of that greatness, it seems the developer still has a bit to learn about large worlds, and sadly, how to optimise a game for the Nintendo Switch.

Let’s be clear, Pokemon Scarlet and Violet are good games. Starting with a similar, familiarly slow opening few hours of setup (after all, every Pokemon game is someone’s first Pokemon game), which includes meeting your cover-star legendary Pokemon Koraidon or Miraidon, but eventually you’re let loose to have your adventure. This is made up of three main story paths that come together well, both in terms of story and with character development. 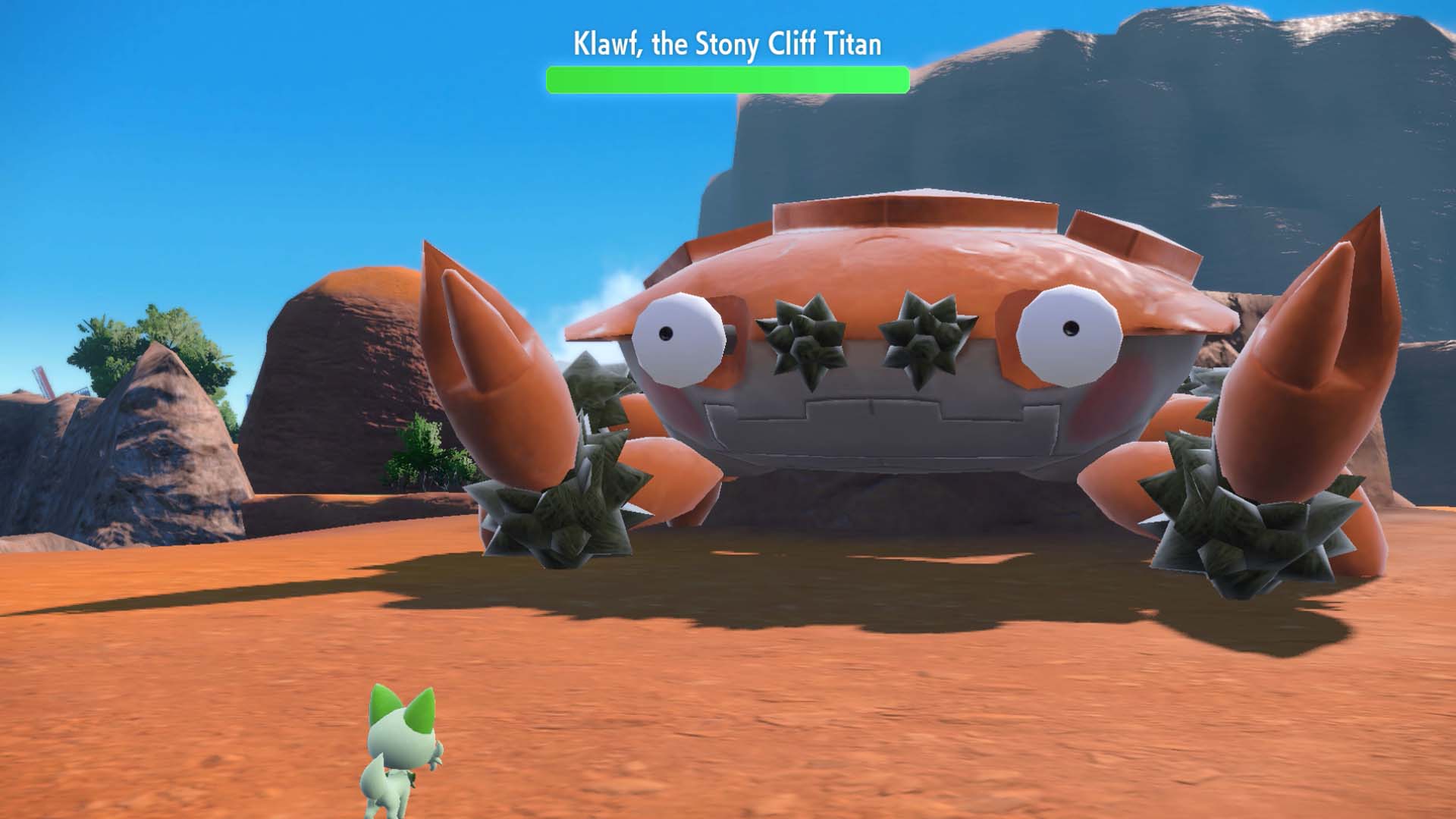 What’s most commendable about these three paths is that while the core Pokemon mechanics retain, they are mixed up to differing levels of success. The Path of Legends is the one most should mainline first. Here, you’ll upgrade your legendary to gain new traversal mechanics, making moving around the open-world easier and, frankly, much faster. This story arc revolves around finding larger than life Pokemon and defeating them in battle. It’s perhaps less exciting mechanically than the others, but due to the boss battle feel of the encounters, it’s definitely one of my favourite of the three paths.

Victory Road is where your standard gym leaders are located. Each is within a large city, and before you fight them you have to take part in a mini-game that differs from location to location. I won’t spoil them as there’s some particularly strange ideas at play here, but it’s different from the regular “fight people and get to leader” gyms of the older games, and is quite refreshing, if indeed all the ideas don’t quite hit. 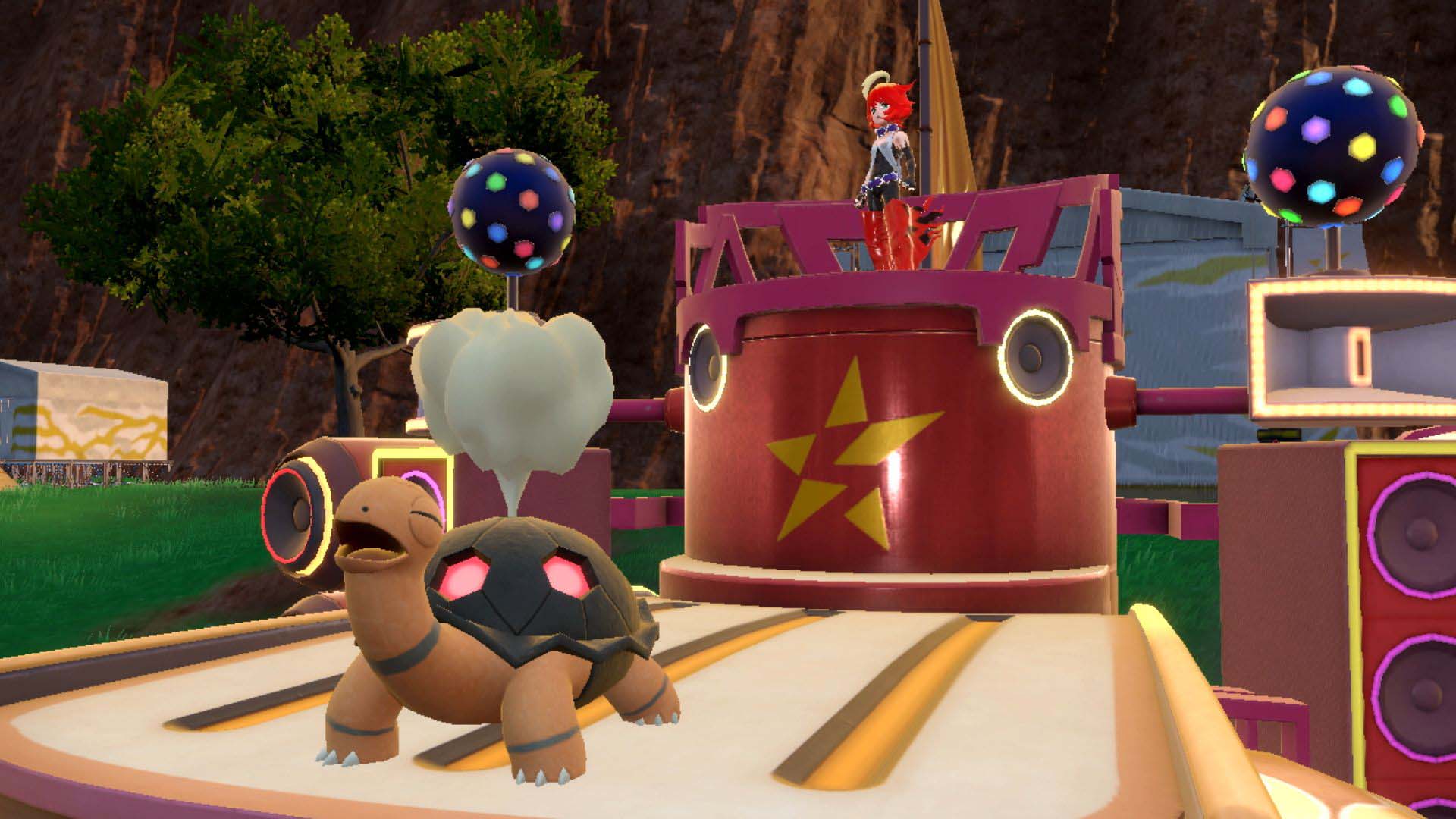 Starfall Street is perhaps the most different of the three paths. A mysterious Rotom-based phone call sets you on way to visit would-be gyms, controlled by students. These involve a standard Pokemon battle at the entrance, then a strange, almost Arceus-inspired action sequence whereby you have to throw your first three Pokemon out who will auto battle everything in sight, with a requirement of beating 30 enemy Pokemon before bringing the boss out.

In truth, these sections are just very strange. You can chuck out your lead Pokemon in the open-world too, and the same auto battles will reward you with experience, but here you can just heal up your pals at vending machines that litter each and every Starfall gym/camp. Of all the story paths, this particular part of Starfall Street is perhaps the most interesting, idea-wise, but the least fun to actually take part in. 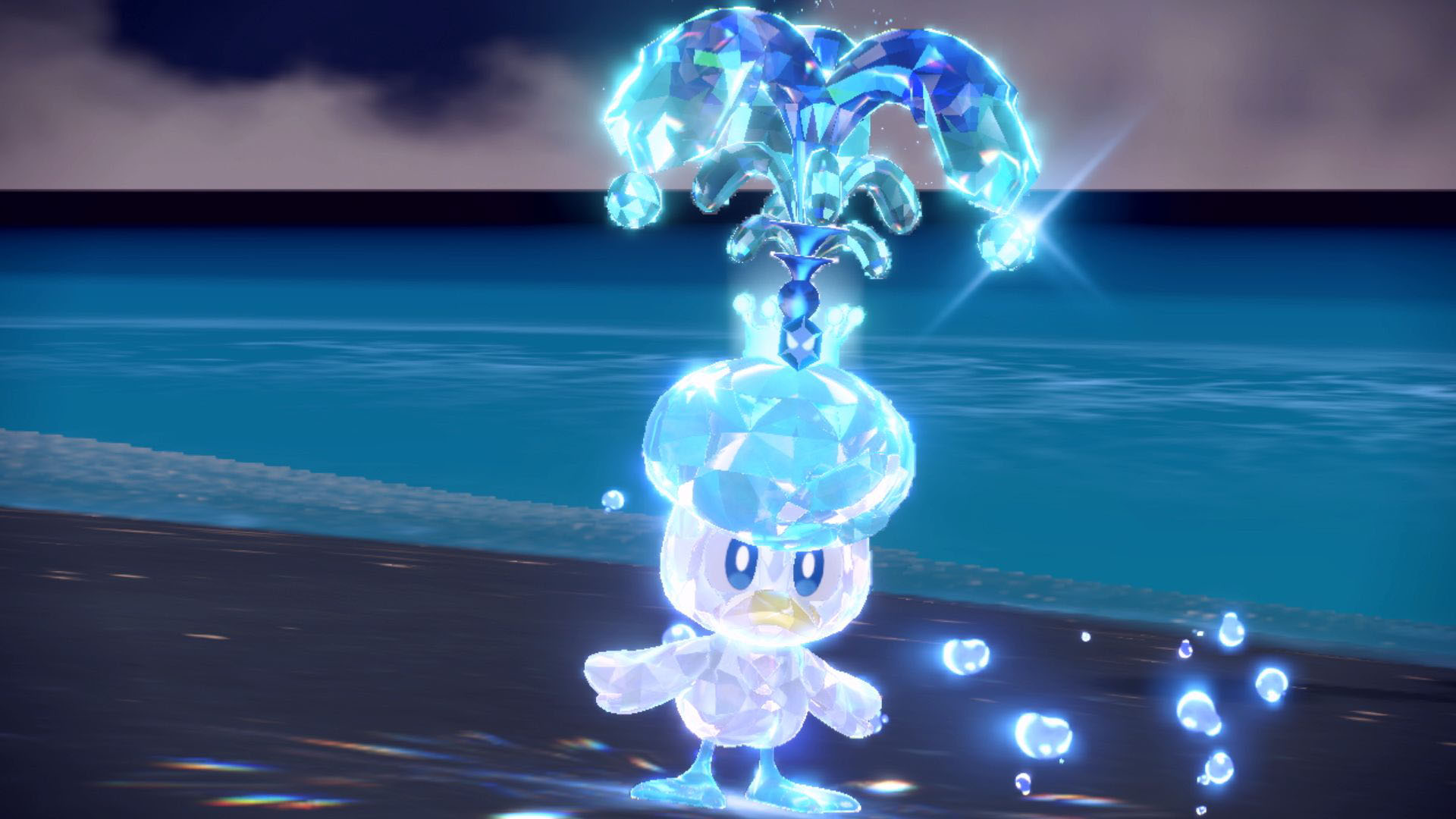 The biggest change to the core battling in Pokemon Scarlet and Violet is the terastallizing effect. Now every Pokemon has a “tera” type, which gives them a crystal-like appearance and changes their type to their tera type. This enhances the Pokemon’s stats, and can turn certain moves into tera-type moves. This will have a major impact on competitive multiplayer, as you won’t know what your opponent has up their sleeve, and is a genuinely exciting development in the game.

What it also does is make Pokemon Scarlet and Violet a more challenging entry into the series. I’m not going to sit here and say it’s now Souls-hard, but we’ve finally moved away from experienced players being able to one-shot everything first-time, to boss encounters and gym leaders taking thought, and dare I say it, a second attempt after actually losing.

Part of this is down to the open world, of course. You can attack things in any order, meaning you can be massively over, or under-levelled. Head North and you might find random gaggles of Pokemon that are ten levels above you, though this does also mean your adventuring could result in you going to complete a story section you’re 30+ levels above. That’s perhaps the price we pay for a truly open world Pokemon game, though I suspect there are ways to mitigate this in future titles. 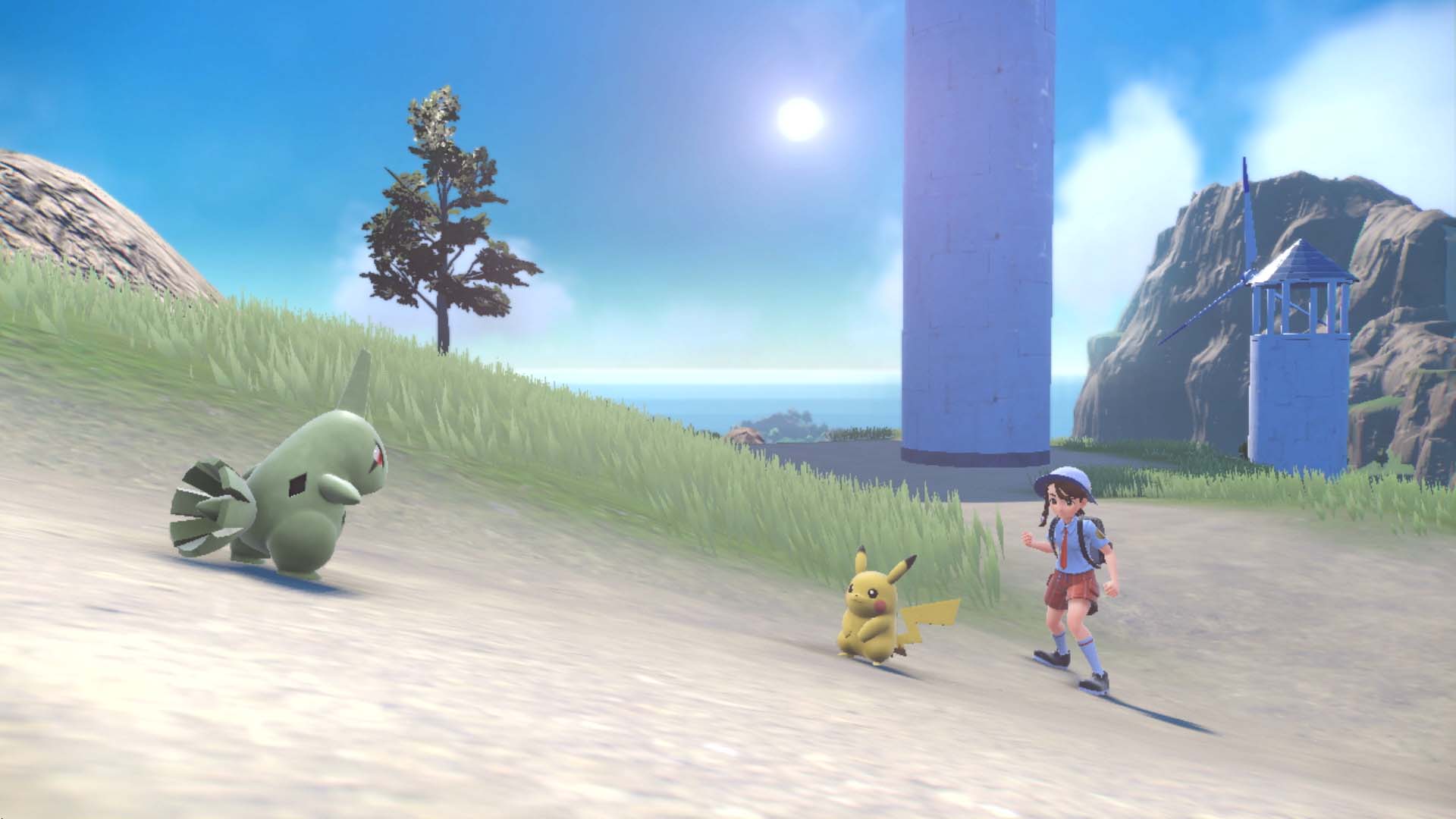 So far, so good, right? But the elephant in the room can be ignored no longer. This is, by far, the most technically problematic platform-exclusive title I’ve played in a very, very long time. I suspect some fans of the series will roll their eyes and say “we’re used to it”, and that’s fair enough, but you (and I) deserve better. Pokemon Sword and Shield ran poorly, but Pokemon Scarlet and Violet is unacceptably bad when it comes to how it runs.

I’d guess the game targets 30fps, but it often struggles with even that, and frankly it isn’t a nice looking-enough game to make that something you can easily take on the chin,. There are frequent stutters in the open world, but believe me when I say that the frame rate isn’t the biggest problem. No, textures will randomly readjust to your distance, characters will literally lose frames as they walk away from you in towns (and we’re not talking far away, we’re talking in your eyeline they will become a slideshow), shadows will change from a day-to-night look depending on camera angle, and then there’s the pop-in. 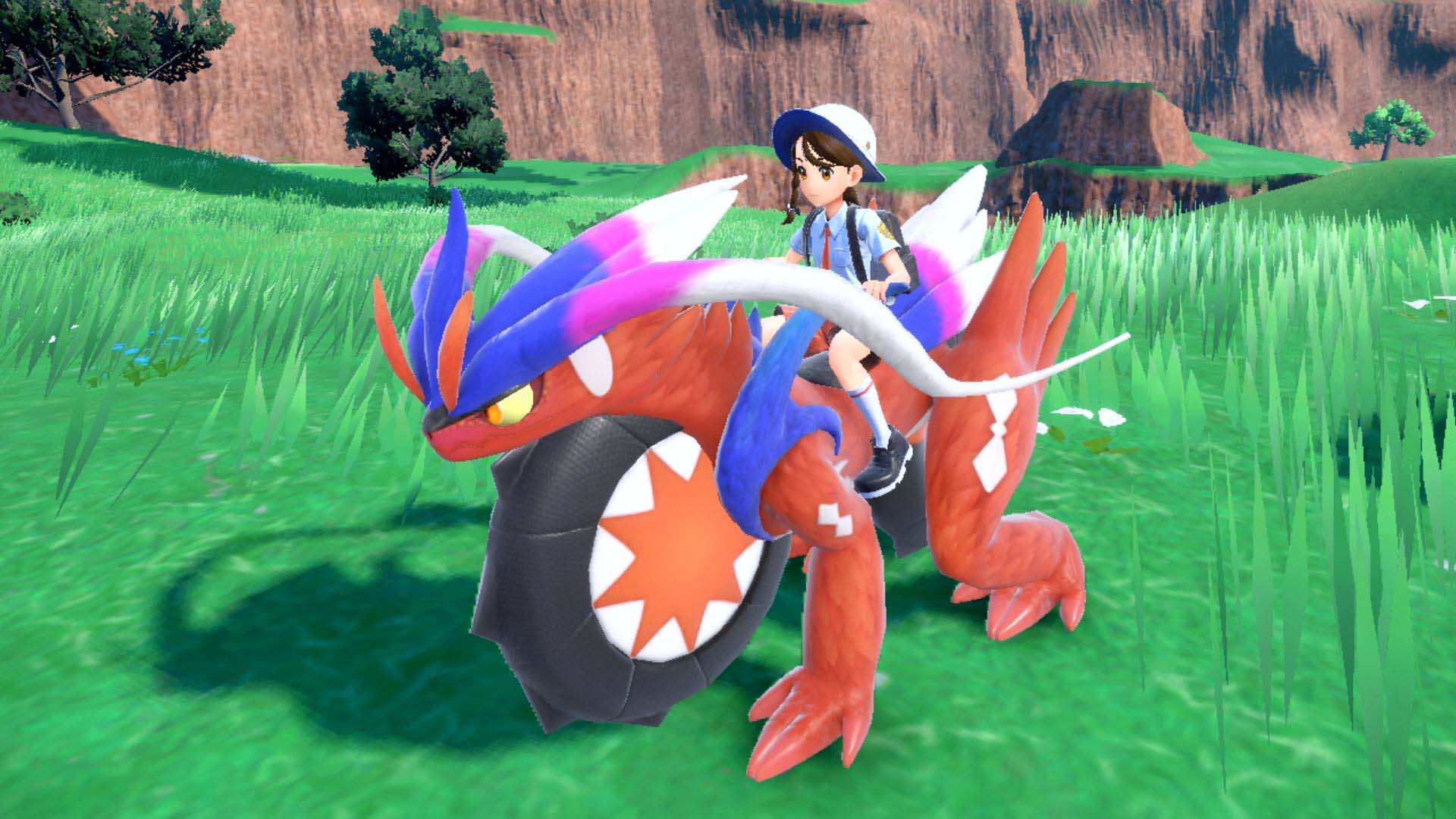 In a game that’s all about catching Pokemon, expect to see them suddenly and violently pop into existence right in front of you. They will fade and pop-in all over the open world, sometimes forcing you into battle when all you want to do is get to the next location. “I didn’t see you”, you’ll cry, and you didn’t: because they weren’t there, they just popped in and weren’t visible under the girth of your legendary mount. It’s frustrating from minute one until the post credits action starts up. Frankly, it’s unacceptable, and it’s not a “Switch problem”, because there are games that look far better and run better. This is a “we know the game will sell so we can get away with it” problem, and Pokemon fans: you deserve better.

There are other issues that make me wonder if Game Freak needed a few more months, in truth. While the technical problems are mostly gone during actual battles, there’s some oddities with camera angles that make me think another pass was planned here. And it’s a great shame, because the post-credits content is some of the most interesting stuff for years, with the legendaries taking some serious leg-work to get, and secrets hidden throughout the world that might cause many people to start googling “how to” articles everywhere. It’s also got a phenomenal soundtrack, perhaps the best the series has ever had. 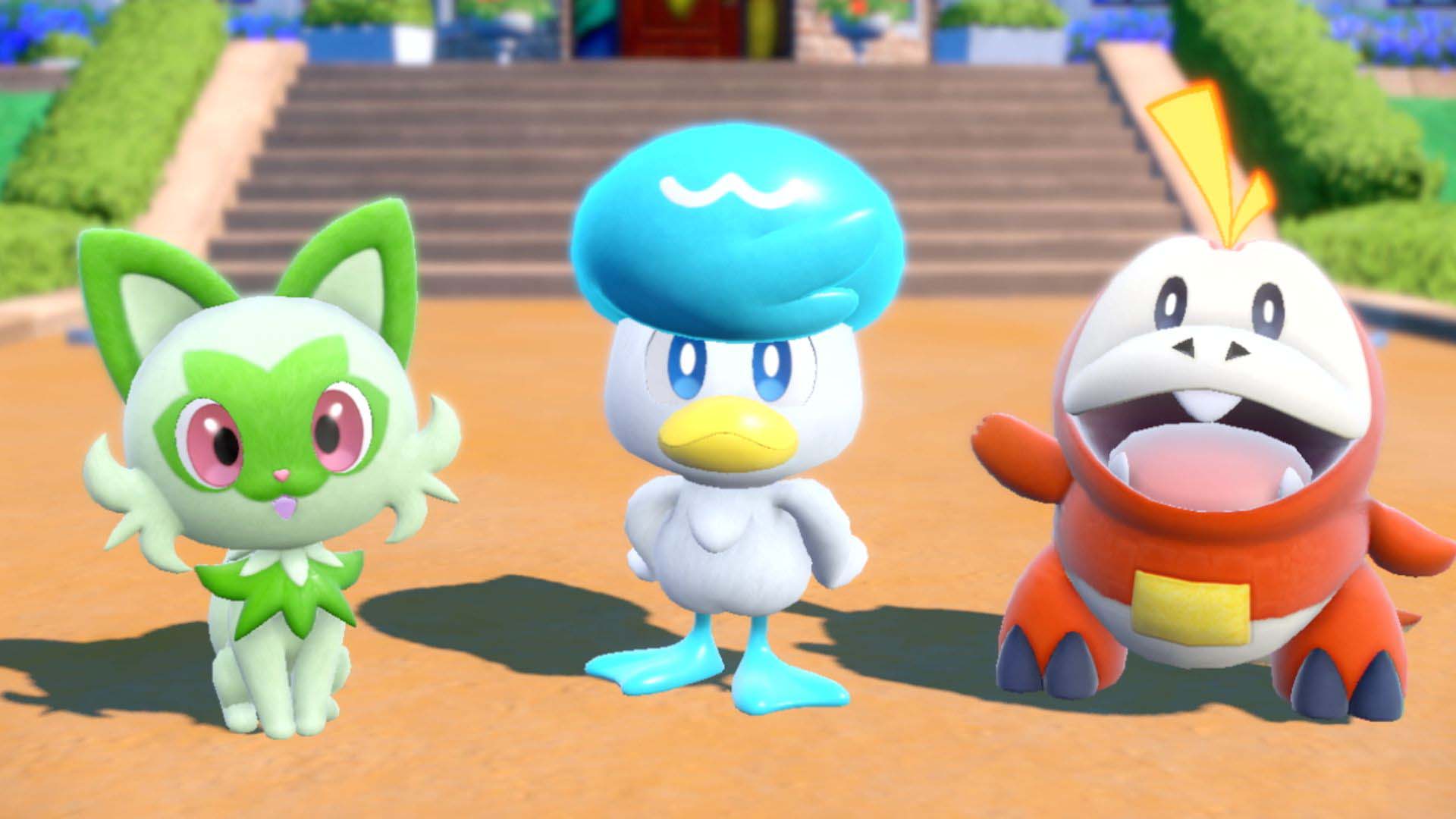 With a plethora of minor changes that add up to a feeling of a truly new game, and in going open world, Pokemon Scarlet and Violet is the most ambitious, yet technically flawed game in the series to date. I am torn because it takes cues from the wonderful Pokemon Legends: Arceus without going all the way, and enacts changes long-term fans of the series will be delighted with, and the terastallized Pokemon could offer some seriously fantastic competitive battles up over the coming times. The new generation of Pokemon is also superb, with great move sets, types, and designs, and Paldea is a sprawling open world to explore, full of nooks and crannies to get lost in.

If you can excuse the technical problems away due to how many fascinating ideas and mechanics Game Freak has thrown at Pokemon Scarlet and Violet, then make no mistake: this is a fantastic game underneath all of that. It’s just a terrible shame that once again fans again have to swallow the deficiencies in order to get to the good stuff. What you’re left with, then, is a great game that’s rather mired in technical issues. Oh, and team Sprigatito for what it’s worth.

Pokemon Scarlet and Violet are great games mired by a host of technical issues.