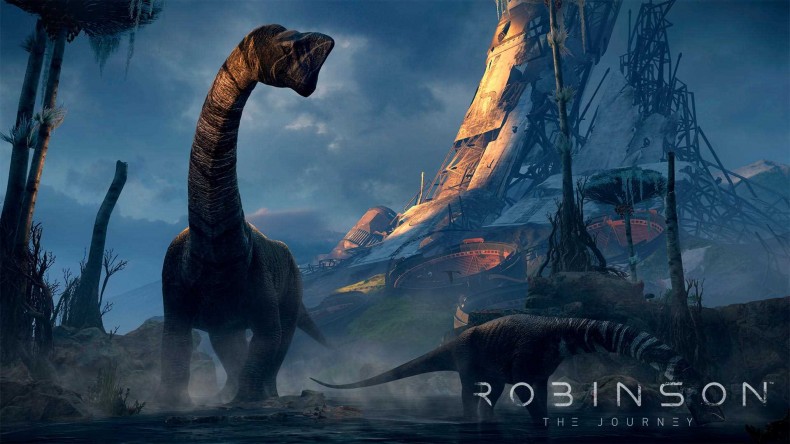 Robinson: The Journey is a name that immediately excites, conjuring up a sense of adventure, evoking the spirit of Daniel Defoe’s classic novel, a story with which it shares its basic premise. You are Robin, your desert island a mysterious prehistoric planet, Titan III. Your spaceship, the Esmerelda has, for reasons unknown, crash-landed and it’s up to you and your buddies, a floating robot named HIGS and baby dinosaur, Laika, to piece together what happened, find survivors and get home.

It’s a perfect set up for a VR game, lost in space on a dinosaur-infested planet, which is brought spectacularly to life by Crytek, who have delivered the most graphically impressive PSVR game to date here. Unfortunately, the intriguing premise and stunning graphics are pretty much completely laid to waste by dire gameplay involving nothing more than a handful of boring object manipulation puzzles and some frustrating traversal elements.

The first thing you’ll notice with Robinson The Journey is that, for all its epic vistas, lush tropical valleys and waterfalls, the actual areas you can move around in are tiny and uninspired. The game, for all the talk of how epic its setting is, is in fact comprised of five small areas connected by small corridors, each of which contains a missing HIGS unit to find and scan for information, a very basic object manipulation or environmental puzzle and a minigame where you redirect the flow of electricity via your pal HIGS. That’s it. As an example of the gameplay, at one point you’ll be tasked with rescuing a baby longneck dinosaur from some mud, which sounds quite exciting. However, in order to do so you’ll simply use the tool in Robin’s right hand to lift a piece of debris, holding R2 to hoover it up and then place it in front of the dinosaur, and that’s it. In terms of interaction that’s as deep as the gameplay gets. Your smart tool has two modes, scan and lift; you complete most puzzles by lifting debris and making bridges for yourself or grabbing an object and throwing it. In between these “puzzles” you can scan wildlife to add to a catalogue of creatures, the most basic of busywork to distract from the fact there really isn’t anything else to do.

In the most exciting area of the game in terms of atmosphere, a dark jungle area full of raptors, it took me all of five minutes to figure out how to do the puzzles and move on. I used my smart tool to pick up a can and smack a piece of fruit from a tree so that a dinosaur would move out of my path, then I used the exact same method to hit a curled up plant to reveal the solution to the puzzle and complete the area. I then spent about thirty minutes trying to figure out where I had to go next which is, at every turn, the hardest part of the game. The frustration with traversal is compounded by the fact motion sickness becomes an issue during extended sessions, unless you use some of the more constrained control settings which employ a pie-chart movement style to help with headaches.

Moving around the environments is done at a plodding pace with no ability to run, and again I’m aware that this is probably to reduce motion sickness but it really doesn’t help when you do so much backtracking due to the very poor signposting between puzzles. I very rarely have to consult walkthrough guides to help me finish a game but I found myself doing so on more than one occasion with Robinson due to the fact there was absolutely no way of telling where to go next or how to move the game on at certain points, other than walking round in circles looking for a vine or climbable ledge that I’d missed. Speaking of climbing, this is probably the most immersive part of the game, controlled by using the L and R bumpers to grab ledges, one for each hand. It works fine but it can be fiddly and falling to grab a ledge results in instant death and the loss of a not-insignificant amount of progress due to poor checkpointing.

Robinson was also very obviously designed to be controlled via MOVE: the tool which Robin uses to interact with objects looks exactly like a MOVE controller, it seems like something that was meant to be implemented but for whatever reason was left out and it’s a shame because it really would have added to what little immersion there is here and it feels like a lazy omission, especially considering the game’s ludicrous price tag.

Besides the puzzles and climbing you’ve got your two companions, HIGS and Laika. Laika can follow you around and fetch items, she’ll go where you point your laser and can also perform a couple of simple tricks, it’s cute for a couple of minutes but totally unnecessary save for a crucial bit of teamwork right at the end of the game, which I won’t spoil for those foolhardy enough to reach it. HIGS proves useful in solving the electricity based puzzles in each area but beyond that he’s C-3PO with all of the whining and none of the humour, constantly putting you down and reminding you that without his help you wouldn’t survive. I couldn’t help but feel grateful that every other HIGS unit I found along the way was dead.

It feels like such an almighty shame that a game this beautiful, with such a compelling premise, should be let down by a failure to include anything approaching interesting gameplay. Robinson: The Journey shows off what can be achieved technically on PSVR, it looks astounding and it’s undeniable that looking up at a giant dinosaur as it towers over you is an awe-inspiring experience in VR, however, it’s not £54 worth of awe. Perhaps if the entry price to this adventure was more in line with the likes of Rush of Blood or Batman VR at £15, it could be more readily recommended just for the sake of seeing what PSVR is capable of. As it is, Robinson: The Journey comes across as a very expensive, very beautiful and very boring tech demo.

Back when Robinson Crusoe was originally published in 1719, it had an extremely long-winded and detailed title, which, if applied to this game would go something like, “The Life and Extremely Tedious Adventures of Robin, Who Lived for God Knows How Long With His Annoying Tin Buddy HIGS on Titan III; Shipwrecked and Forced to Carry Out The Most Tediously Simple Tasks Until Motion Sickness Overwhelmed Them.”

Amazing graphics and beautiful scenery
Yyou’ll be speechless the first time you see a large dinosaur.
Great premise and interesting story with a satisfactory conclusion

It feels like such an almighty shame that a game this beautiful, with such a compelling premise, should be let down by a failure to include anything approaching interesting gameplay.