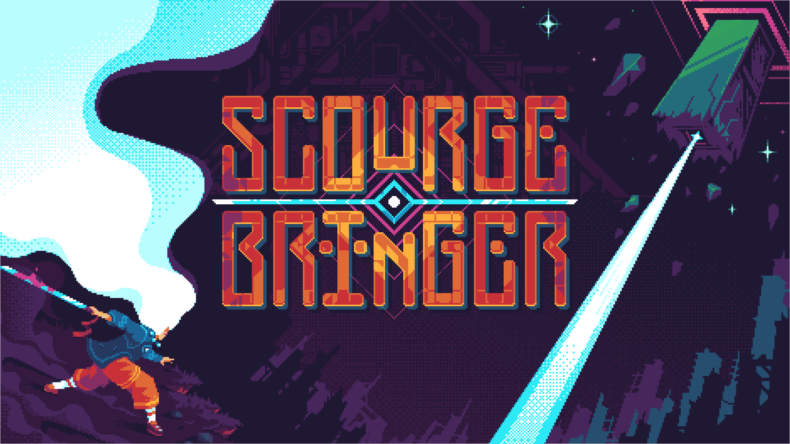 I previewed ScourgeBringer from Flying Oak Games when it entered Steam Early Access at the start of the year, and I was impressed with it even then. Its frantic mix of sword and gun-play is difficult to master (in fact, I still haven’t mastered it), and the roguelike challenge is incredibly steep.

It’s set in a world where a race of machines has enslaved humanity and your white-haired heroine, Khyra, is on a dimension-hopping quest to save her people. Mostly, this involves leaping from room to room using blade and bullets to annihilate the machine army, clash with huge bosses, and rely on randomised drops to improve your chances.

Similar in set-up to Neon Abyss, Black Future ‘88, and Dead Cells, each death will drop you back at the starting area, here known as the Chiming Tree, where you can spend skill points earned by beating mini-bosses and main bosses, called Judges. Because skill unlocks are permanent, you’ll always feel a sense of progression, even when you’re struggling to make it out the first world (of which there are six in total). 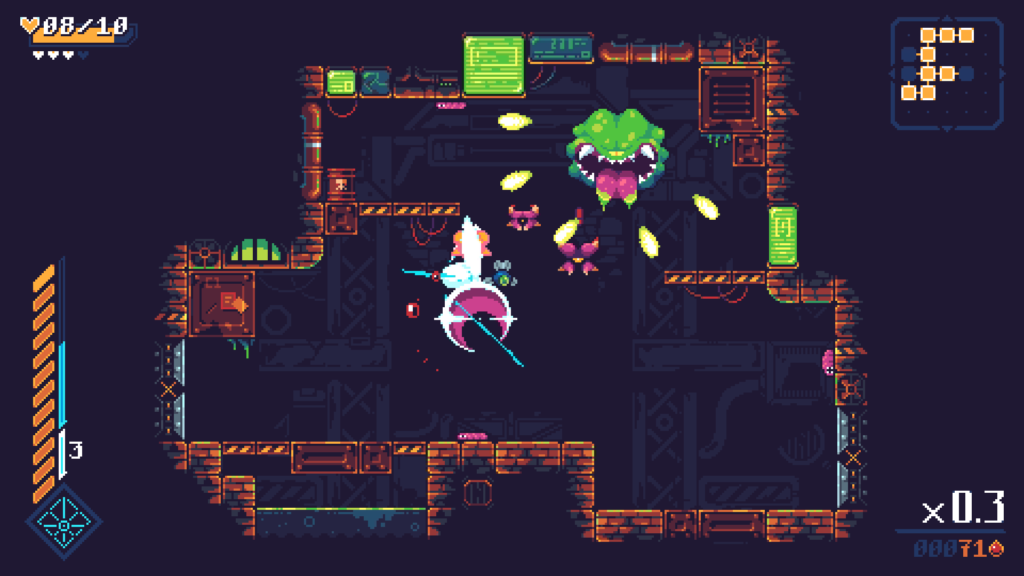 And you’ll need every skill you can muster, as well as some pretty superhuman reflexes. ScourgeBringer is very hard, as is expected of the genre, but it’s made harder by just how fast it is. Khyra can double jump, cling to or bounce of surfaces, shoot and slash and dash like a cannonball – and she’ll need to, as each room is a mini bullet hell of randomised enemies. Some charge at you, or shoot at you, some explode when they die, while there are bobby-trapped surfaces all over the place.

Standing still for more than a heartbeat will often see you lose one of your limited hearts, so learning to chain moves and attacks together is essential. A heavy attack will stun enemies if you time it right, and disrupts ranged enemies before they can unleash their payload. What I struggled with was the dash move. While it’s cool to be able to move across the map so quickly and evade fire, the trouble comes from my pre-trained brain trying to dash through attacks, when in ScourgeBringer, you can’t do that. Curse you, Dead Cells.

As is standard you’ll come across shops and merchants here and there who will trade goods for drops of blood, and most maps hide an altar that will bestow a permanent buff from a choice of three. There’s even a cloaked figure named Peppy who will randomly appear at the beginning of a run and shower you with gifts like extra hearts and weapon upgrades. His help doesn’t guarantee victory but it’s always welcome. 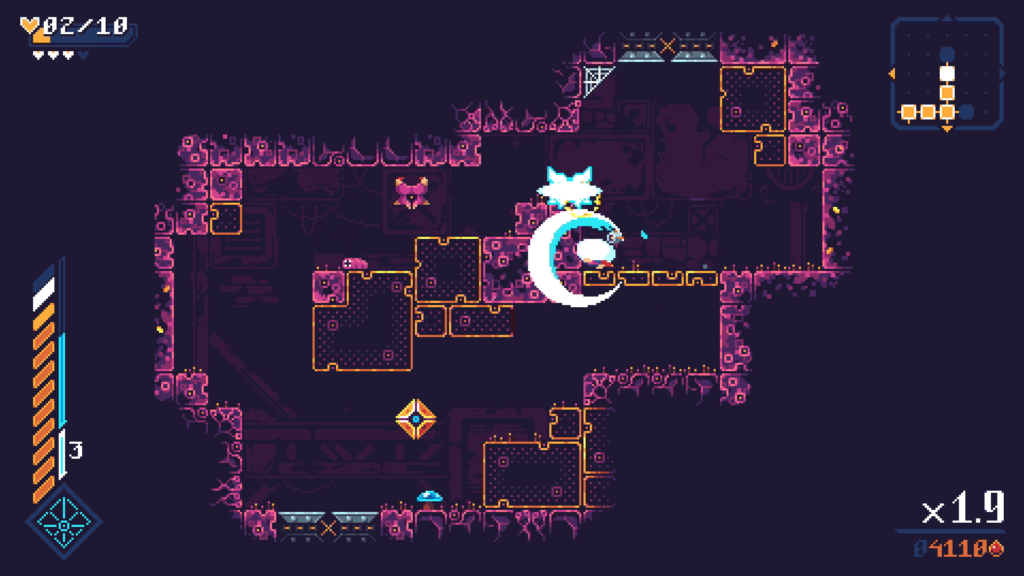 Although you don’t unlock and bank potential drops as in some of ScourgeBringer’s closest peers, there is a wide selection of gear to find if you’re lucky. From items that boost your speed, grant extra hearts, or transform your pistol into a rapid fire machine gun, there are dozens of power-ups to stumble across.

ScourgeBringer is aesthetically beautiful. Fans of pixel art will have a lot to get excited over, but some of the colours are gorgeous. It reminds me most of titles like Celeste and Furi, all blues and mauves and flashes of white and gold. Khyra’s big white hair sways around her as she ninjas her way through legions of robot enemies and the blink of her sword is as satisfying to watch as to hear.

The Nintendo Switch version of ScourgeBringer is the same one I’ve been playing on and off on PC, only it’s now complete. There are no Switch-specific features, other than that it looks so great on the smaller screen in handheld. It looks, runs, and fits very well on the Switch, too, as do many similar titles. Perhaps the biggest issue here is that ScourgeBringer is entering a very crowded market, both on PC and Switch. This particular style of roguelike is incredibly pervasive, so every new addition must stand out from the rest. ScourgeBringer does manage to feel different during play – it’s certainly faster than some – but it doesn’t offer anything truly new, and that could be a problem for some. For fans of the genre it’s an absolute must-play though, if only because it offers such a steep challenge to accompany those lovely, lovely visuals. It may not be the most original concept, but what it does it does very well.

For fans of the genre, ScourgeBringer is an absolute must-play though, if only because it offers such a steep challenge to accompany those lovely, lovely visuals. It may not be the most original concept, but what it does it does very well.