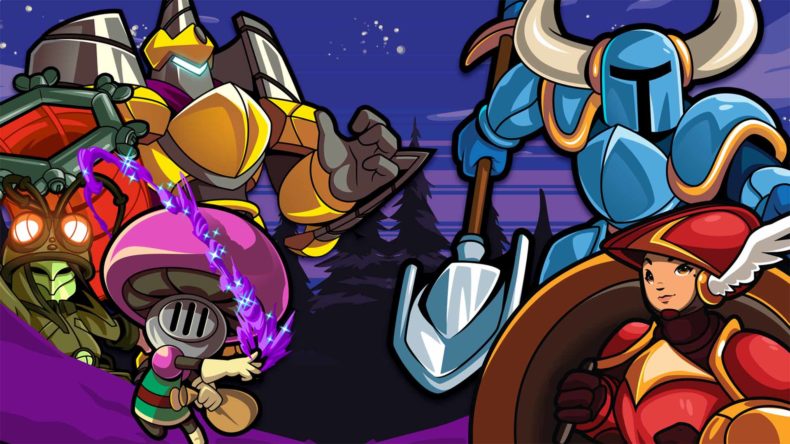 It’s been over eight years since Shovel Knight released to almost universal acclaim. Since then we’ve seen plenty of new Shovel Knight content, from huge new campaign DLC to spin off games like the wonderful Shovel Knight Pocket Dungeon. So far everything the little blue knight has touched has turned to gold, and that trend seems to be continuing with Shovel Knight Dig.

While relaxing after a hard day of adventuring, our garden tool wielding hero is knocked out by a huge drill that comes flying from the sky. Piloting it is Drill Knight (of course) who steals all your hard earned treasure and digs a massive hole in the ground to get away. So now fueled by a new vengeful goal, Shovel Knight grabs his weapon and jumps down after him.

The hole in question isn’t just a pit to a boss fight though, it’s an ever changing tunnel that takes you through different themed worlds every time you jump down it. Yes, Shovel Knight Dig is a roguelike. A roguelike that blends Spelunky, Mr Driller, and that pogo bouncing attack we all know and love to create something truly special. 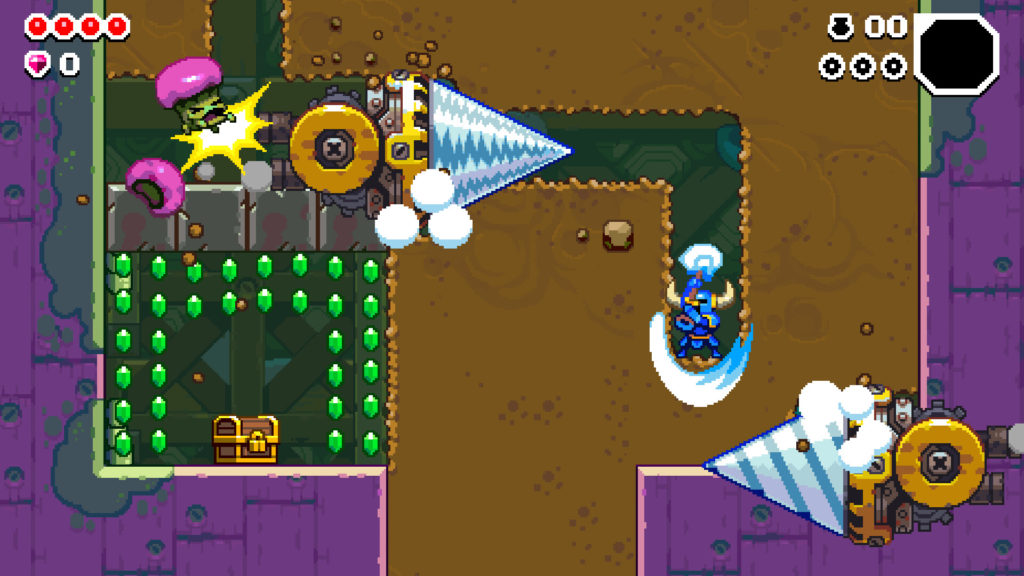 The aim of each section of the tunnel is to reach the bottom, but between you and your goal there are all sorts of enemies, traps, and collectibles you’ll need to navigate. What makes this different to similar games with the goal of descending is how much dirt you’ll need to dig through to get to the bottom.

You’ll come across huge walls of dirt on pretty much every stage of Shovel Knight Dig, and by mashing your attack button downwards or sideways can dig your way through it. With explosive mines and dangerous drills packed inside though, it’s never easy to avoid being hit and losing some precious life. Even when out of the dirt you’ll find it being used to aid in the platforming. If you hit the dig button fast enough on a strip of dirt floating in the air you can use it to get over large gaps. It’s a cool mechanic that changes throughout each run as different types of dirt start to appear.

Outside of all the digging, you can swing your shovel as a weapon and hit your downward pogo strike to bounce from enemy to enemy. This mechanic is as satisfying as ever, and you’ll immediately remember why Yacht Club Games decided to base an entire franchise around it all those moons ago. The simple moveset works perfectly for a roguelike, and also means there’s plenty of room for power ups to shake things up a bit. 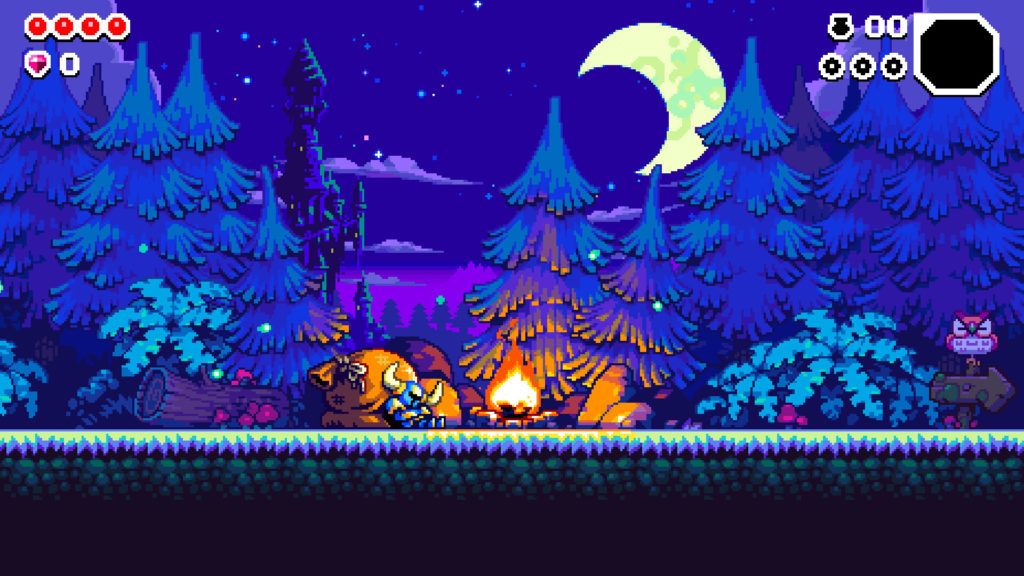 There are lots of different ways to make yourself stronger in Shovel Knight Dig. Secret rooms that you smash open can have anything from max HP upgrades to relics that function as a subweapon (like a bouncing fiery orb or a lance that deals extra damage with every successful strike) locked inside. Each section of the tunnel also features three cogs to collect, and at the end of the stage if you grab them all you’ll be able to pick from an accessory that offers a permanent buff or a meal to fully heal you.

As you might expect the buffs vary in how much they’ll help you. After a few runs you probably won’t really need the magnifying glass to show you where secrets are hiding, but the phoenix feather that essentially gives you an extra life will never stop being useful. It won’t take you too long to see most of the possible accessory power ups, but with a few sackfuls of gems you’ll be able to unlock more at the surface.

Between runs you can spend any gems you collect on upgrades and new accessories, so no matter how badly a run goes you’ll progress in some way. Adding more powerful items into the hole might just give you the edge on your next adventure, whereas new armour and shortcuts could change the run entirely. 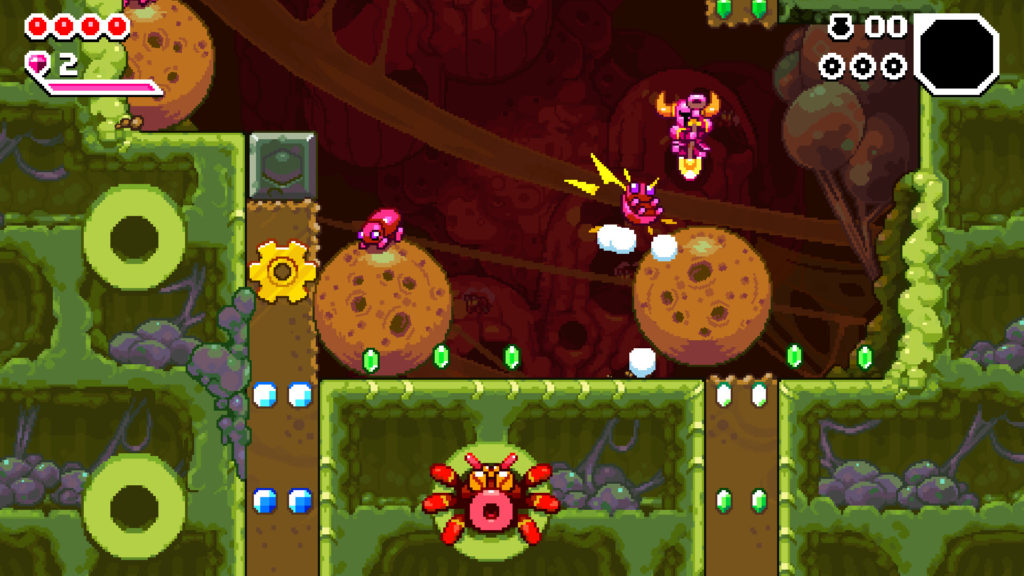 If you want to get your hands on all the cool items, you’ll need to collect as many gems as possible down in the pit. There’s a real emphasis on gathering the treasure, and plenty of opportunity to do so if you’re willing to take a risky route past a trap or two. There are shops down the hole too though, so you’ll have to balance buying upgrades and health with topping up your savings.

When you realise how important cold hard cash is in Shovel Knight Dig you’ll probably try to slowly and methodically grab every last gem on your adventure. The developers knew you’d try this though, so any time you dawdle you’ll notice a bit of rumbling from above followed by a massive chainsaw that’ll ruin your day. I must admit at first I found this a little annoying, but after a few runs I got used to getting a move on and barely saw the evil blade of doom.

One thing that really helps Shovel Knight Dig stand out as a roguelike in a crowded genre is how simple it is. There’s not a lot of obscure mechanics and baffling secrets to get your head around, and every item has a description that actually explains what it does. Even the difficulty makes it more accessible. It’s by no means an easy game, but it’s probably the first roguelike I’ve ever managed to beat within six hours of playing. There are accessibility features in the settings menu too ranging from bonus health to altering the game speed itself, so you absolutely don’t need to be intimidated by the difficulty. 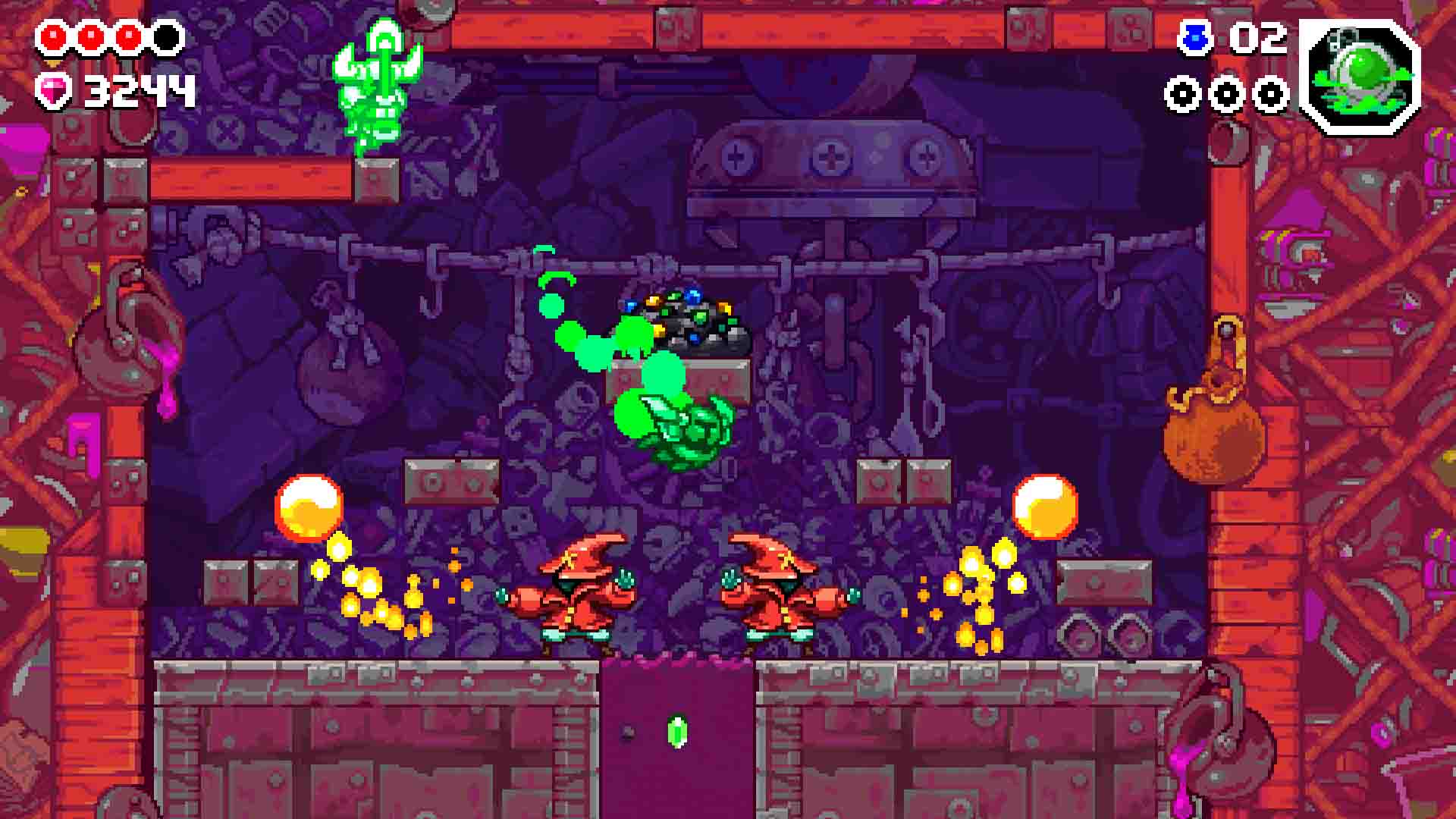 If you’re a fan of tough games though, don’t think there’s nothing here for you. Each world ends with a boss fight you’ll need to learn the moveset of if you want to escape with any health, and they’re just as fun here as they were in the original Shovel Knight. There’s also almost certainly a true ending to discover, with plenty of paths and secrets I couldn’t uncover on my own.

You also shouldn’t mistake the simplicity of Shovel Knight Dig with a lack of ideas, because the game is absolutely packed with varied traps, enemies and worlds. The mushroom themed area has fun bouncy mushrooms and works great as a place to learn the basics, then you’ll find yourself in a fiery hellscape or a gorgeous underground Atlantis with fish swimming up the walls. Whenever I thought I’d seen everything that Shovel Knight Dig has to offer, something new and exciting was waiting to batter me around the corner.

I’d be a fool not to mention the visuals and soundtrack of Shovel Knight Dig. As is standard for the franchise the retro aesthetic is done right, and will be a huge hit with fans of old school graphics. The soundtrack is simply chiptune mastery. Listening to every track took me back to a childhood full of Mega Man games, and I can’t praise it enough.

Shovel Knight Dig is the perfect first roguelike, packed full of that tasty Shovel Knight gameplay we all know and love.

You may also like
Shovel Knight DigYacht Club Games