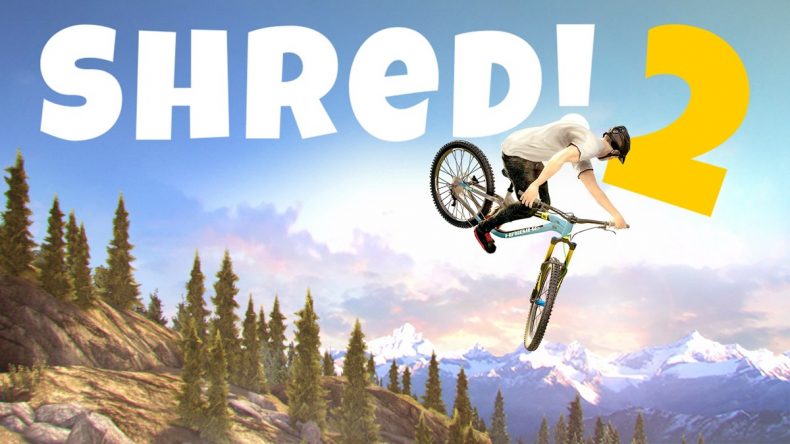 Shred! 2 is a tough, tough game to master. Making sure you build enough speed and tick all the right boxes whilst busting out a trick or two takes time, and for a while I struggled to find any kind of gratification in what I was doing. Games like Trials Rising provide a challenge, but after some trial and error you find your flow and begin to learn what it is asking of you. The mechanics in Shred 2 are unforgiving, and if you don’t get it 100% right, you’ll fail a lot. I spent a lot of time frustrated and close to breaking my controller, hoping and praying that for every twenty times of failing to reach a new section of the course, I’d manage to progress, but for a long time it was to no avail.

I played tons of Tony Hawks Pro Skater back in the day – even Dave Mirra Freestyle BMX – but all that experience meant nothing. Shred 2 is punishing, and that might be due in part to the control system. There’s little to learn in the grand scheme of things. Along flat surfaces, it’s important to pedal so that you don’t come to a standstill, but for the most part you’ll be using something called a pump. Holding in A at specific points allows you to sit into your bike and pick up speed whilst riding over bumps or going downhill. When you get to a certain point, letting go will see you glide through the air. Depending on the size of the gap between ramps, you’ll be tasked with busting out a trick, but some of the tracks don’t give you adequate time to perform them.

Each one of the forty tracks has a set number of objectives, such as finishing in under a certain time, or performing a specific set of tricks. The problem with this is that you don’t always get the space to do so. If you’re tasked with hitting a backflip, you need enough airtime to perform it, but you’re so focused on landing correctly that you rarely get the right opportunity. It’s tough, but replaying the track enough and getting to grips with every window you have does allow you to learn exactly when these opportunities arise. There’re a selection of tricks for you to perform, and these are activated by pressing a direction on your right stick. The biggest problem I had was how unresponsive the system is. I’d often press a direction, but it wouldn’t always work. I found that I had to press quite hard for any trick to work, and pressing a fraction too late meant I came hurtling down into the ground without completing what I wanted to do. Holding a pump in mid air makes you fall faster, and that means you’ll pick up speed for the next ramp/jump, but it’s such a challenge to do so. More tricks equal a higher score, but it’s more important to focus on hitting your objectives so that you can progress through the game.

Each new set of courses is locked behind a star system. You earn a star for every objective met, and the more you collect, the more chance you have to move through Shred 2. There’s a range of courses that get you to utilise every move at your disposal, and there’s a fair amount of differences between tracks. Sometimes you need to land a succession of tricks, whilst other times you need to manual over ledges after hopping up onto them. Pressing A allows you to hop, but again, the button isn’t as responsive as it should be. When it comes to a manual (balancing on your front or back wheel), I found it rather satisfying to rack up points because it isn’t particularly hard, but it did mean I had to sacrifice speed as a result.

Shred 2 lacks the polish of bigger games in its genre. The visuals are pretty bland, and it suffers as a result. Textures are limited, and the weather isn’t particularly dynamic or detailed, but it is a port of a mobile game at the end of the day, so you’re never going to get a vast amount of detail or sharpness. There’s enough diversity in the tracks, but if you want fancy backgrounds that are interesting to look at, this isn’t a Trials game. Sam Pilgrim and his bike don’t look particularly great either, but you’re not really paying attention to it when you’re trying so desperately to master the controls. I will say that not all my time playing Shred 2 was me crying into my hands as I failed time and time again to proceed. You do get times when everything flows and you’re flying through the tracks with a tasty amount of gusto; however, it requires a ton of practice and replaying to get you up to the level Shred 2 requires. There’s little else to do outside the actual tracks. The omission of online leaderboards is disappointing, as it would be cool to see how everyone else is getting along with the tracks, and without any multiplayer elements, it’ll struggle to hold your interest if you can’t get on with the controls.

I may sound like I’m not a huge fan, but the truth of it is I just couldn’t get to grips with the controls. Sam Pilgrim is a hugely successful mountain biker, and many of his fans will love this. Perhaps I’m missing something, and a lot of people will get to grips with its mechanics a lot faster than I did. Unfortunately, though, the delay in initiating a trick and getting used to the pump system never gelled for me. It does bring a much loved series to Xbox One, but along the way its poor visuals and frustrating control system just wasn’t for me.

If you’re a MTB fan, and loved playing the Shred! series on mobile, there’s probably a lot here for you to enjoy. Unfortunately, the controls aren’t as sharp as I’d liked, and without stable button inputs and a trick system that would have been better mapped to something other than the right stick, it feels as though Shred 2 would’ve been better suited remaining on a less powerful console. The original soundtrack is pretty good too, but is that enough to keep people hooked? Only time will tell.

Shred! 2 is a tough game with unresponsive controls, meaning it's often tough to balance landing a jump successfully and hitting a trick required to get you those all elusive stars.